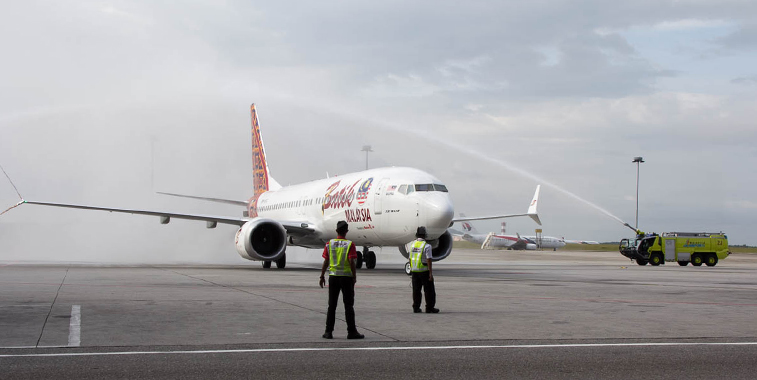 Malindo Air became the first operator of the 737 MAX 8 when it took delivery of the aircraft in May, with Kuala Lumpur Airport saluting the aircraft arrival with a water arch, with the unit being painted in the carrier’s new Batik Air Malaysia livery. The aircraft’s first commercial flight was from Kuala Lumpur to Singapore on 22 May. Speaking of the aircraft’s arrival into Malindo Air’s fleet, the carrier’s CEO, Chandran Rama Muthy, said: “The Boeing 737NG fleet has served Malindo well in its growth and we believe that the 737 MAX will become the centerpiece of our fleet. These new aircraft will allow us to go to further destinations and will play a key role in providing lower air fares to our customers.”

Following on from 98 unit deliveries in April, Airbus and Boeing witnessed an upturn in productivity in May, with both companies combined handing over 116 aircraft in the fifth month of this year. However, the result is still 9.4% worse (12 fewer units) than what both achieved in the same month last year. May was the first month since December that Airbus has outperformed Boeing in regards to deliveries, with the European giant distributing four more units than its US counterpart. While Airbus handed over 60 units in May, 7.1% more than Boeing (56 unit deliveries), the North American manufacturer beat Airbus in regards to the wide-body market, with it handing over 20 wide-body variants in May compared to Airbus’ 14. The result means that so far in the 2017 delivery race (January-May) Boeing is leading Airbus by 277 units to 242 (13% more). In May 29% of all aircraft delivered were wide-body, with the remaining 71% narrow-body. This compares to the 75% narrow-body and 25% wide-body ratio that was achieved in May 2016. 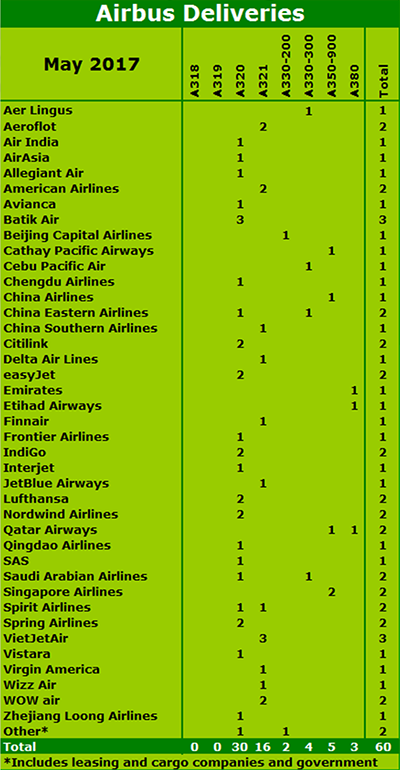 Airbus delivered 60 aircraft in May, up 14 units compared to the 46 aircraft it handed over in April, and three more than the 57 it distributed in the same month last year. For the fifth month of 2017, single-aisle deliveries were led by the A320 (30 units in total), followed by the A321 (16 units). The leading customer of the A320 in May was Batik Air, with it welcoming three into its fleet. Citilink, easyJet, IndiGo, Lufthansa, Nordwind Airlines and Spring Airlines each welcomed two A320s in May respectively, with 22 companies in total receiving at least one A320. VietJetAir was the premier customer of the A321, with it welcoming three of the type, while Aeroflot, American Airlines and WOW air each receiving two.

In relation to the wide-body market, Airbus handed over 14 wide-body variants, four more than it managed in April, and five more than it managed in May 2016. The leading aircraft type to be delivered was the A350, the same as it was in April, with five being handed over to four airlines. Singapore Airlines was the leading customer, with the Star Alliance member welcoming two in May, while Cathay Pacific Airways, China Airlines, and Qatar Airways each received one. The MEB3 member, along with fellow category carriers Emirates and Etihad Airways, each received one A380 in May, while a further four A330-300s and two A330-200s were also handed over to varies clients. 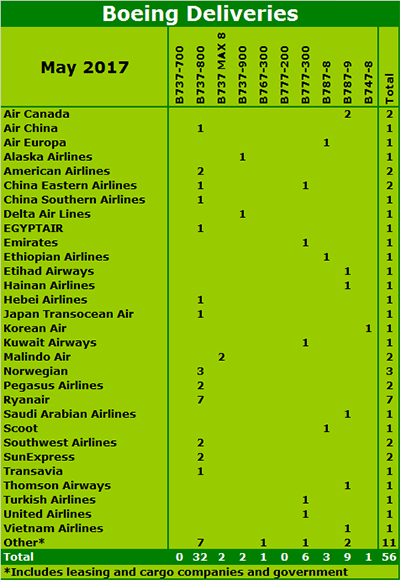 Boeing delivered 56 aircraft in May, of which two were the company’s first two 737 MAX 8s, with both going to Malindo Air. “We are thrilled to partner with Boeing to take delivery of the world’s first 737 MAX 8s,” said Chandran Rama Muthy, CEO of Malindo Air, at the welcoming ceremony of the aircraft. “The Boeing 737NG fleet has served Malindo Air well in its growth and we believe that the 737 MAX aircraft will become the centrepiece of our fleet. These new aircraft will allow us to go to further destinations and will play a key role in providing lower air fares to our customers.” Of Boeing’s deliveries in May, 36 were single-aisle, two fewer single-aisle aircraft than it handed over the month before. Of those 36 aircraft, 32 were the manufacturer’s leading aircraft type – the 737-800 – with its leading customer in the fifth month of 2017 being Ryanair which picked up seven, the same amount it received in April, March and February. Another leading carrier to receive the 737-800 in April was Norwegian, with it welcoming three units.

An analysis of the wide-body market shows that Boeing handed over 20 wide-body aircraft in May, six more than it managed in April. The leading model was the 787-9, with nine being handed over. The leading customer of the type was Air Canada which received two. Along with the 787-9s, three 787-8s, six 777-300s and one 747-8 were also delivered in May. 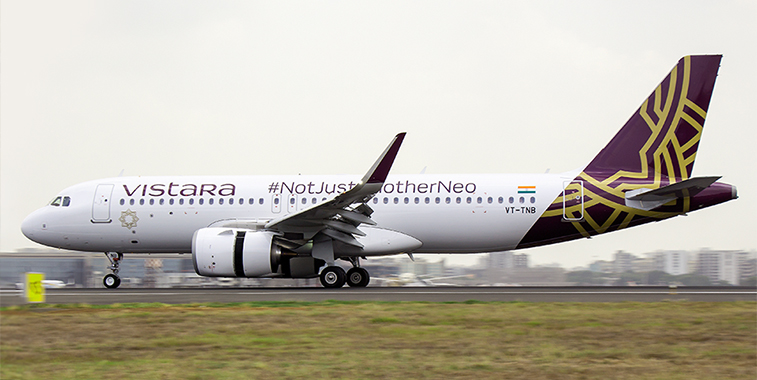 In May Vistara welcomed its first A320neo, with the carrier adding the hastag #NotJustAnotherNeo to the side of the aircraft to promote the news of the unit’s arrival on social media. Vistara currently operates 13 A320s on domestic Indian routes. The increased range of the A320neo provides greater reach as Vistara plans to spread its wings internationally in the future according to Airbus’ press release of the delivery.