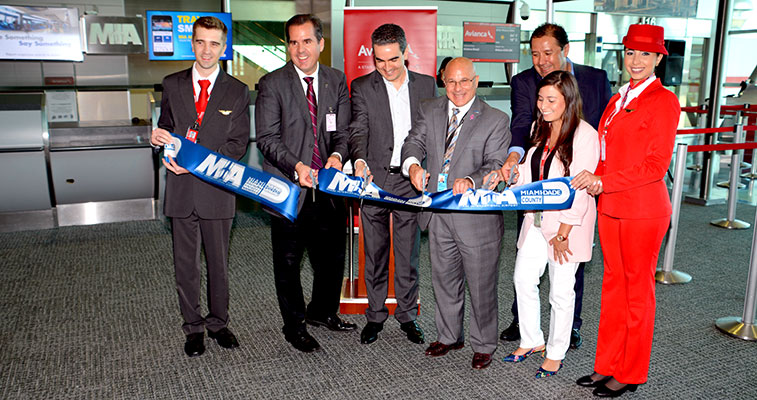 Avianca Brasil began daily services between Sao Paulo Guarulhos and Miami on 23 June, joining American Airlines and LATAM Airlines. According to the latest Brazilian government statistics, the carrier has 11% of international RPKs among Brazilian airlines, about the same as GOL, but well behind LATAM Airlines with 78%.

After a difficult 18 months, demand for air travel in Brazil appears to be growing once again. According to latest government statistics, domestic RPKs (Revenue Passenger Kilometres) were up in March 2017 for the first time since July 2015, after a run of 19 consecutive months of falling demand. Even hosting the Olympics last August failed to have a positive impact on domestic demand. With modest RPK growth of between 1.5% and 3.0% in April, May and June, this means that 2017 Q2 is the first quarter of growth since 2015 Q3. June’s 1.6% growth in RPKs has been achieved despite a 1.0% cut in ASKs (Available Seat Kilometres). As a result domestic load factors have risen by two percentage points from 78.1% to 80.1%. 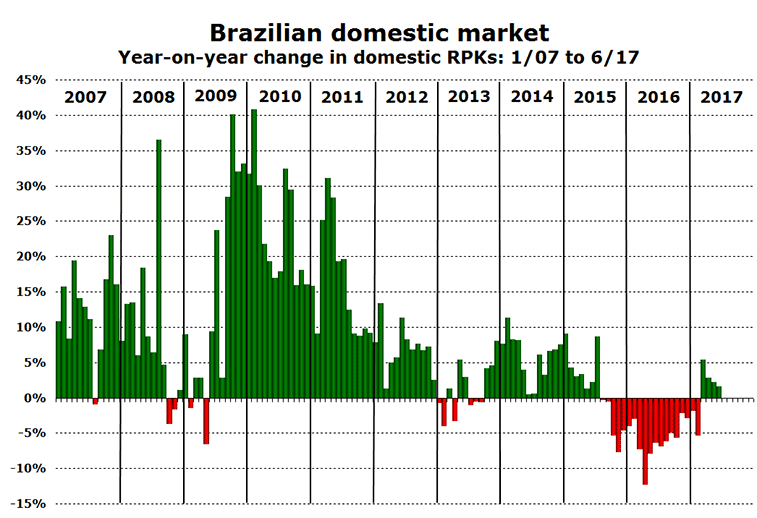 Among Brazilian carriers operating internationally, LATAM accounts for 78% of RPKs in June 2017 with Azul and GOL both having approximately 11% each.

Five of six privatised airports in Brazil growing once more

The operators of Brazil’s privatised airports chose a challenging time to get involved with the country’s facilities. All six saw passenger numbers drop in 2016: Sao Paulo Guarulhos saw traffic drop 6.1% to 36.6 million; Brasilia was down 8.0% to 17.9 million; Rio de Janeiro Galeao fell 5.0% to 16.1 million; Belo Horizonte declined 14.7% to 9.6 million; Viracopos was down 9.7% to 9.3 million; and Natal dropped 10.4% to 2.3 million. With the exception of Natal, all of these airports have returned to growth in the second quarter of 2017. 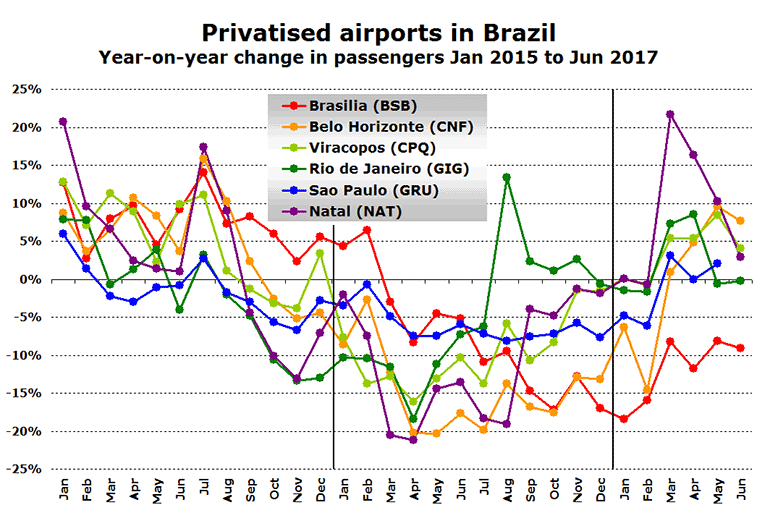 It was announced last week that two more Brazilian airports, Fortaleza and Porto Alegre, will be operated privately from early 2018 with the Brazilian government signing a concession agreement for these two facilities to be managed and developed by a new company, Fraport Brasil. Fortaleza was the 12th busiest airport in Brazil in 2016 with 5.7 million passengers while Porto Alegre ranked 8th with 7.6 million passengers. The agreement for Fortaleza is for 30 years while the Porto Alegre contract is for 25 years.