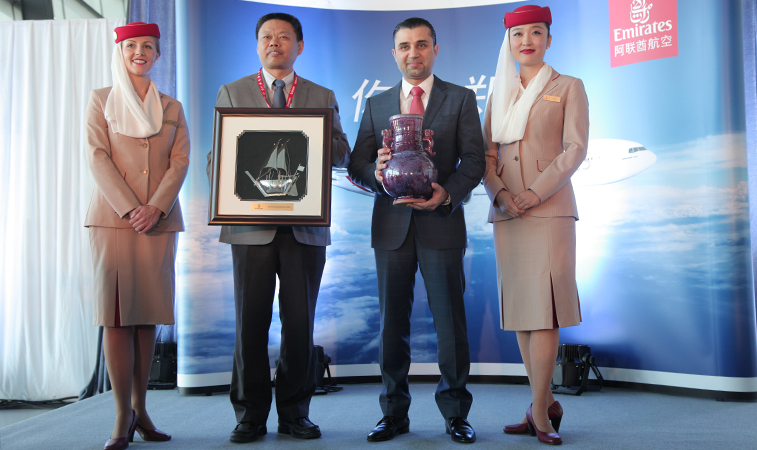 Liu Jiamin, Vice GM, Henan Airport Group, and Badr Abbas, SVP Commercial Operations Far East, Emirates, exchanged gifts at the launch of Emirates’ first flight from Dubai on 3 May 2016. Since last summer, a further nine airlines have begun flights to Zhengzhou, helping it to be named the fastest-growing airport in China over 12 million passengers.

As stated, last year Zhengzhou handled 20.76 million passengers, up 20% when compared to 2015. This makes Zhengzhou the fastest-growing airport in China handling over 12 million passengers per annum, with the next best airport for growth in that category being Shenyang, which witnessed traffic rise by 18% to 14.97 million in 2016 according to the Civil Aviation Administration of China (CAAC). 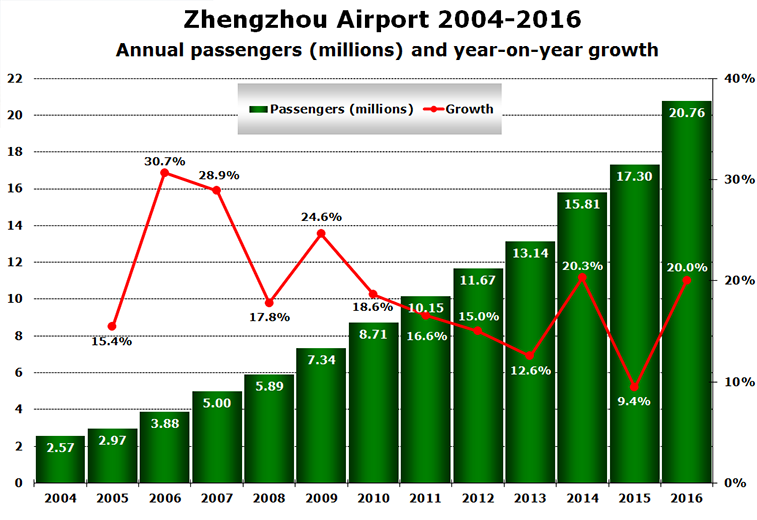 In 2016 a further 3.47 million people flew through Zhengzhou when compared to 2015. This is the biggest net gain in passengers per annum that the airport has ever witnessed, with the best year before that being 2014, when the net gain in passengers was 2.67 million. In context, 3.47 million passengers is currently an airport as busy as Nuremberg in Germany. What is even more staggering about Zhengzhou is that in the first year of this Millennium the airport handled 1.52 million passengers, meaning that in 16 years the annual traffic throughput of Zhengzhou has risen by 1270%. To put this into perspective of European airports, Zhengzhou has grown from being the size of Aalborg in Denmark in 2000 to an airport just a little bit smaller than Berlin Tegel in 2016.

Since 2004, the average year-on-year increase in traffic from Zhengzhou is 19%. If that figure was to be achieved in 2017, then the airport should expected to welcome almost 25 million passengers this year. However, when referring to OAG schedules, seat capacity from the airport this summer is up by 17%, so if this figure was achieved in passenger traffic growth, Zhengzhou should see 24.3 million passengers.

China Southern Airlines is Zhengzhou’s largest carrier, with it occupying 22% of weekly seats from the airport this summer, a market share that has dropped from 30% which the SkyTeam member recorded this time last year. One reason for this drop is due to the airline reducing its weekly seat capacity to Zhengzhou by 18% in S17. A factor for the decline is the cut in international capacity from the Chinese city. This summer China Southern operates to Bangkok Suvarnabhumi, Osaka, Phuket, Taipei Taoyuan and Tokyo Narita internationally from Zhengzhou on 16 weekly flights, all operated by 737-800s. Last summer the carrier also served Hong Kong, Seoul Incheon and Jeju, with it operating 37 weekly non-Chinese flights in S16. With all international services last year also having been flown on 737-800s, it means that China Southern’s international weekly seat capacity from Zhengzhou this summer has dropped by 57%. 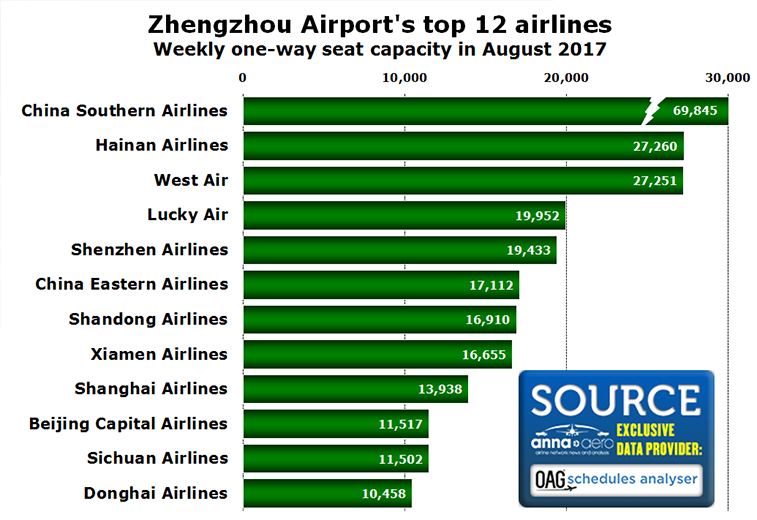 Shenzhen is number one route this summer

Shenzhen is Zhengzhou’s leading route this summer, with the connection accounting for 5.0% of weekly seats. It is followed by Urumqi which takes up 4.9% of the market. Just missing out on a spot in the top 12 connections from Shenzhen is Shanghai Pudong, a route which has seen its seat capacity rise by 13% during the past year. However, with routes above it also seeing growth it remains in the same position it occupied in S16. Surprisingly Beijing is only Zhengzhou’s 35th largest route according to OAG schedules. Of the 41 routes flown from Zhengzhou this summer, 16 are to international destinations. Of those 16 routes two are long haul – Vancouver (with Sichuan Airlines) and Dubai (Emirates via Yinchuan). 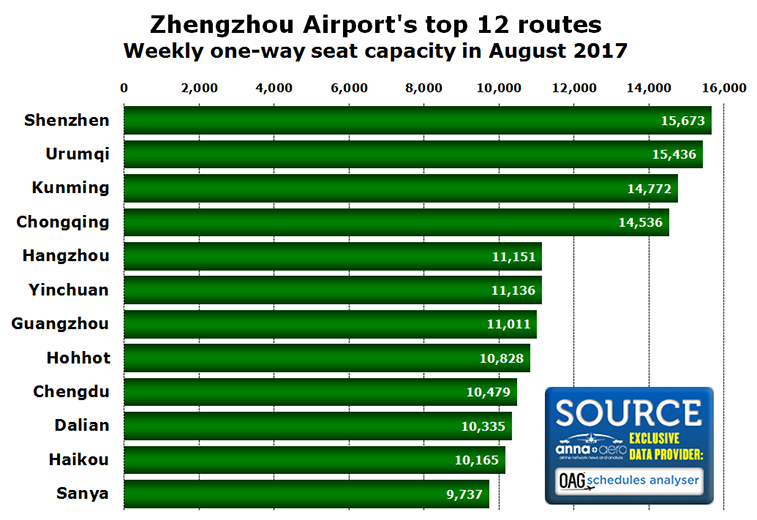 Despite the phenomenal growth being seen from Shenzhen in recent years, the international sector is the complete opposite, with the market seeing a 15% cut in weekly seats this summer when compared to S16. As a result, the non-Chinese market share of seats has dropped from 5.3% in 2016 to 4.0% this year.

In 2016 roughly 9,700 one-way passengers (26 PDEW) travelled indirectly between Zhengzhou and Wuyishan in Fujian Province according to OAG Traffic Analyser data, making it the largest unserved market from Zhengzhou. Following Wuyishan is Melbourne with 9,650 annual one-way passengers in 2016 (26 PDEW) and Changsha with 8,900 indirect one-way passengers (24 PDEW). While Melbourne’s traffic count does not seem that strong for a direct flight at present, last year an estimated 51,000 people (70 PDEW) travelled indirectly between Zhengzhou and Australia, making it the second largest unserved O&D market after the US (58,600 estimated passengers in 2016). So with Melbourne being the largest unserved city pairing in Australia from the Chinese city, it could be a viable route if connection options are given via a potential serving airline. However with the international market shrinking from Zhengzhou at present, it could be a service that would greatly benefit the airport as the city tries to emerge as a global player. 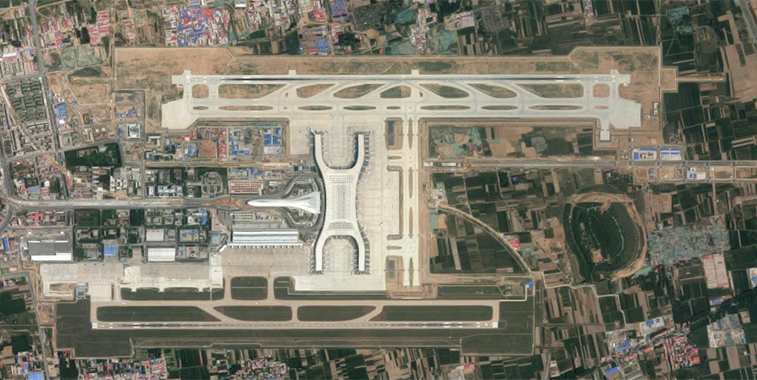 Zhengzhou Airport was China’s fastest-growing airport to handle over 12 million passengers in 2016, with it seeing its traffic increase by 20%. While passenger traffic has been growing phenomenally, it is not being seen across all sectors. The international market has seen capacity cut by 15% this summer.