London Gatwick invests £1.15 billion – and saves some to back anna.aero in Prudential RideLondon-Surrey 100 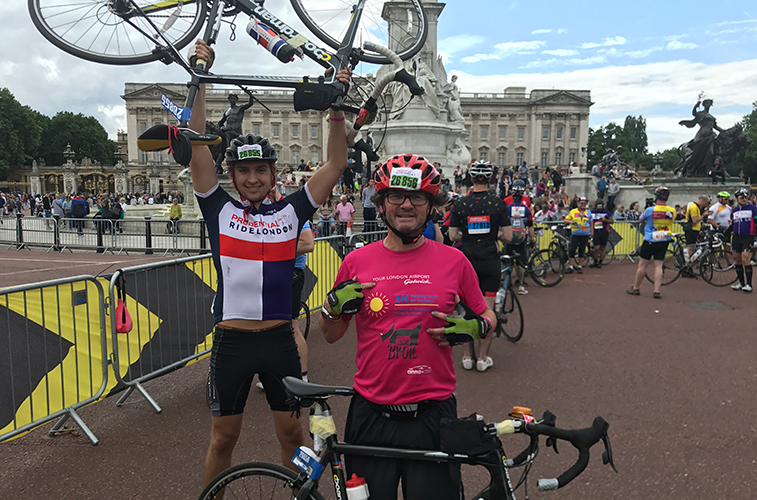 Another great London Gatwick investment: anna.aero’s publisher, Paul Hogan, was noticeably even more smelly and oily than usual at the finish outside Buckingham Palace – in contrast to his correctly-liveried son Max, seen here hoisting his ultra-lite bike.

As Your London Airport Gatwick announced last week that it will invest £1.15 billion over the next five years “for more growth, improved efficiency and record levels of passenger satisfaction”, anna.aero was thrilled that it had reserved a sizeable pile of cash to sponsor its “TeamBron” entry in the RideLondon-Surrey 100, the 100-mile closed-road cycle race following the 2012 Olympic road race course.

The Gatwick sponsorship was in aid of 3H, a charity local to the airport which provides holidays to the disabled and their carers, while anna.aero’s “TeamBron” is named after Brontë “Bron” Hogan, the anna.aero publisher’s 12-year-old daughter who lost her five-year battle with leukaemia in 2011. The team raises over $30,000 every year for a range of good causes.

In echoes of Chris Froome’s bike-less run up Mont Ventoux, anna.aero’s Hogan had to run almost 2km to a repair station in Guildford after his chain snapped. However, unlike the Tour de France champion, there was no fairy-tale recovery and, after spending an hour in the pits, Hogan emerged to set a ‘personal worst’ time of 7.05 hours. “Together with 30,000 other competitors we loved the chance to see London’s best tourist sites from the middle of 100 miles of closed roads, and we’re very grateful for the reliable annual Gatwick support for TeamBron and 3H,” said Hogan, who was noticeably even more smelly and oily than usual at the finish outside Buckingham Palace.