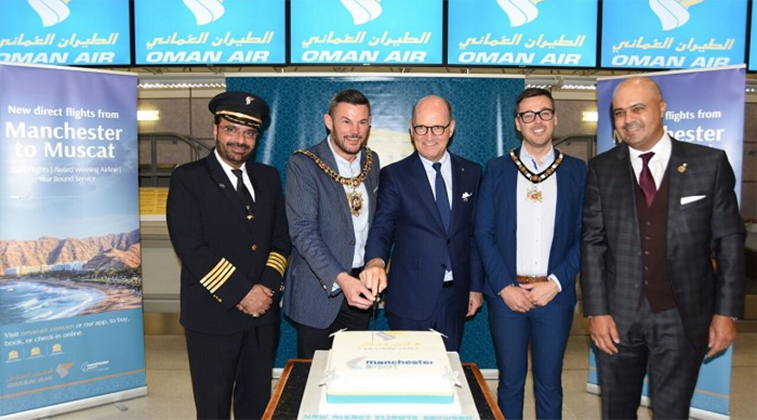 In May 2017 Oman Air launched daily flights to Manchester, an event celebrated by Captain Ali Sulaiman, Oman Air; Lord Mayor of Manchester, Carl Austin-Behan; Oman Air CEO, Paul Gregorowitsch; the Lord Mayor’s Consort, Simon Austin-Behan; and SVP International Sales, Oman Air, Ihab Sorial. What a decade: In 2016 Oman Air welcomed 7.71 million passengers, up from the 1.23 million it flew in 2006, meaning a 527% increase in annual traffic during the past 10 years.

Last year Oman Air handled a record 7.71 million passengers, up by over 21% when compared to 2016. Indeed it has been a decade of consistent 20% average year-on-year growth for the carrier. If the 20% average trend is to continue for 2017, then Oman Air should welcome around 9.3 million passengers this year. Load factors are also increasing – with an average of 74% last year, up from 71% in 2015. Since 2006, Oman Air’s annual traffic has increased by 527%. 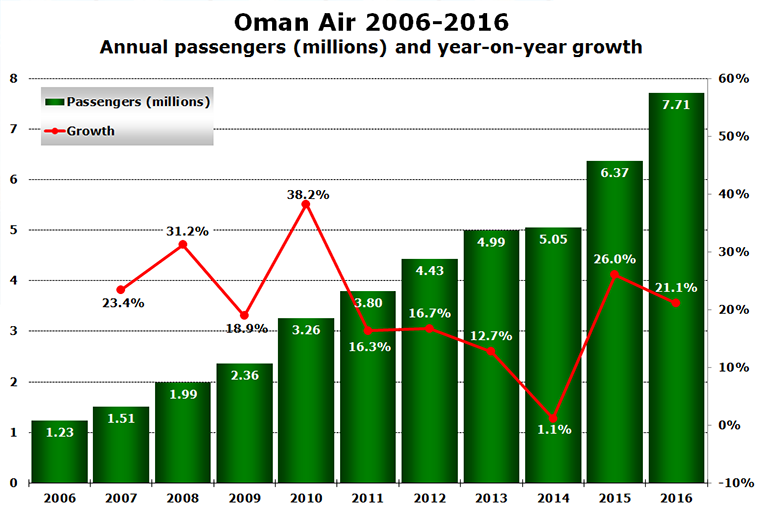 According to OAG Traffic Analyser data, in 2016 some 2.47 million Oman Air passengers connected at Muscat, a 30% increase in connecting traffic when compared to 2015 (when just less than 1.92 million passengers used Muscat as a transfer point). To put this into perspective, more passengers connected with Oman Air last year than the whole amount that flew with the airline in 2009. It seems that connections have become a big part of Oman Air’s expansion strategy, with 32% of all passengers now using the airline to transfer, compared to a 20% share the market had in 2012. Indeed, in the past five years, connecting traffic has increased by an annual average of 31%.

You can come and see Oman Air’s brand new and fast-growing transfer hub, even before it opens, at December’s ACI Airport Exchange hosted by OAMC. Oman Air’s senior management and airport bosses from across the Middle East are all expected along with 100+ other speakers for what is being billed as the new facility’s opening party. 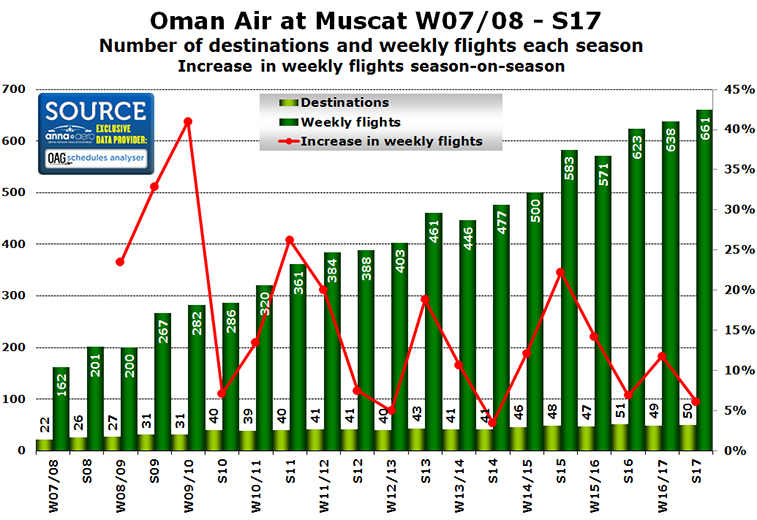 This summer, Oman Air serves 50 destinations from Muscat, up from the 22 destinations it served in W07/08. Since last year, Oman Air has added Manchester and Nairobi to its Muscat network (after adding Najaf, Mashhad and Guangzhou in 2016). While it recently ended service on the domestic route to Sohar from Muscat, in the past year the carrier has also begun flights between Salalah in Oman and Kozhikode in India. The only other route that the airline operates that does not involve Muscat is the daily service it operates between Salalah and Dubai.

Oman Air’s domestic connection between Muscat and Oman’s second city of Salalah (highlighted in light green) is the leading route in its network, with the intra-Omani link accounting for 9.6% of the carrier’s weekly seats from the capital this summer. It remains the leading route despite Oman Air cutting weekly seat capacity on the service by 26% in S17 when compared with the same period of last year. Its ranking is then followed by links to Jeddah (5.7% of weekly seats) and Dubai (5.6%) to complete the top three connections. 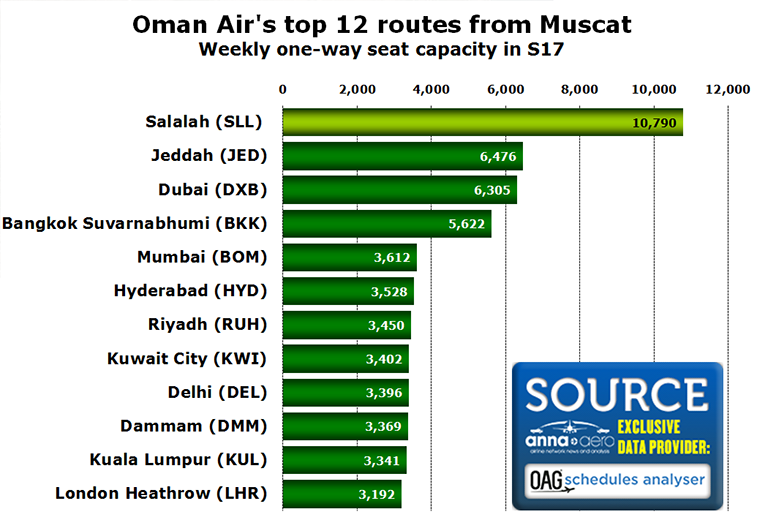 Although the airline has confirmed that it wants to add a further 11 destinations by 2023, it has not announced any future routes from Muscat in the short-term. However, presumably this will happen soon after Oman Airports Management Company (OAMC) opens the new Muscat Airport terminal in 2018 – an important component of infrastructure of national importance to Oman. Oman Air’s future growth will be helped by the opening of Muscat’s new airport facilities in early 2018, including a new northern runway. The new strip was officially opened in 2014, with Oman Air (of course) being the first airline to use it, and greeted with a water arch salute before departure. Omani authorities are hoping to cater for 20 million passengers per annum with the opening of the new terminal, as part of a long-term strategy to reach 48 million passengers.

In 2016 some 2.47 million Oman Air passengers connected at Muscat, a 30% increase in connecting traffic when compared to 2015. To put this into perspective, more passengers connected with Oman Air last year than the whole amount that flew with the airline in 2009. Visit this fast-growing Middle Eastern hub in December at the ACI Airport Exchange event.