Stop faffing and join the latest teams to sign up to Budapest Runway Run: registration must close 18 August 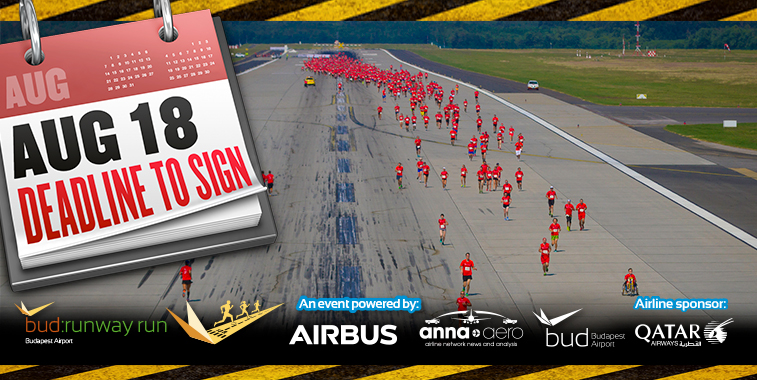 You’ve got until Friday 18 August to sign-up to the Budapest Airport-anna.aero Runway Run, sponsored by Airbus and Qatar Airways. This is a real deadline – the Budapest runway is obviously an airside area and everyone has to be security cleared in advance! We’ve taken the BUD Run roadshow around the world – you’ve seen us at Routes Europe in Belfast; CONNECT in Ajaccio; IATA Slot Conference in Kuala Lumpur; the ACI EUROPE AGM in Paris; and the British-Irish Airports EXPO in Birmingham – now it’s time to turn your promise into a definite sign-up. We know who you are, we’ve got photographic evidence of your support, now you need to commit.

Not quite as large as the 31 runners it fielded last year, but more sizable than the 19-strong team it entered in the 2015 Budapest Airport-anna.aero Runway Run, MEB3 (Middle East Big 3) carrier Emirates has gone big again, with 21 athletes signed-up for the 2017 premier sporting event. Masterminded again by team leader Attila Bors, the airline’s local staff will again be vying for the Fastest Airline Team ‘The Fastest Airline in the World’ title again – currently held by Aer Lingus. On the hunt for the Fastest Airline Team ‘The Fastest Airline in the World’ prize is MEB3 (Middle East Big 3) carrier Emirates. With over 20 runners taking part, it certainly has improved its odds of stealing the trophy from the current incumbent, and two-time winners, Aer Lingus.

The 21 team members come from a diverse range of roles at the airline, with numerous Customer Sales and Service Agents running alongside Operations Officers, HR Coordinators and Training Officers. Age is not important either, with the Emirates squad fielding a 59-year-old and everything in between down to its youngest entrants who are just 23. So whether you are front-of-house or back office staff, young or not quite as young as you feel, there really is no reason why you shouldn’t be pulling on your running vest and burning some (shoe) rubber down Budapest Airport’s Runway 13R-31L at 11:00 on 2 September.