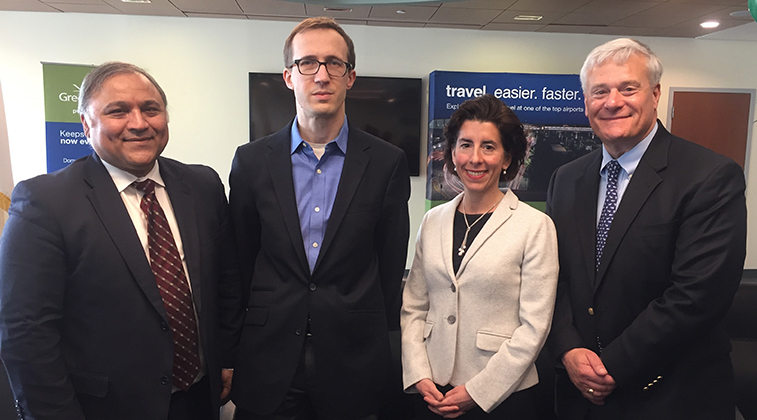 Back in May, Frontier Airlines announced that Providence would become a new airport on its network, with flights to Orlando starting this week on 14 August. Seen at the announcement are: Iftikhar Ahmad, President and CEO of the Rhode Island Airport Corporation; Daniel Shurz, SVP Commercial, Frontier Airlines; Gina Raimondo, Governor of Rhode Island; and Jonathan Savage, Chair of the RIAC Board. 18% of the airline’s passengers travelled through Orlando in 2016, with it seeing a 76% growth in traffic when compared to 2015 to 2.63 million passengers. Traffic for Q1 2017 is up 28%.

Orlando is Frontier Airlines’ second largest airport operation, with it sitting just behind the carrier’s home-base of Denver. The latter airport has a 22% share of the airline’s weekly seat capacity this summer, while Orlando has a 8.4% share. In third spot is Las Vegas with 6.5% of weekly seats. If we compare the three airports this year with their respective S16 schedules, Denver has seen its share of Frontier’s capacity drop from 23%, while Orlando has seen its share rise from 7.9%, with Las Vegas up from 5.6%.

Orlando is clearly a major focus of Frontier’s growing network, with the Floridian airport in 2016 welcoming 2.63 million passengers with the carrier, an increase of 76% when compared to the 1.49 million that used the airline from Orlando in 2015. In Q1 2017, Frontier carried 1.13 million passengers from Orlando, an increase of 28% against the same quarter of 2016. If a 28% increase is maintained for the rest of 2017, Frontier should expect to carry just under 3.37 million passengers from Orlando this year. However, with April showing a climb in traffic for the carrier of 48%, this figure could be much higher as average monthly traffic growth continues. 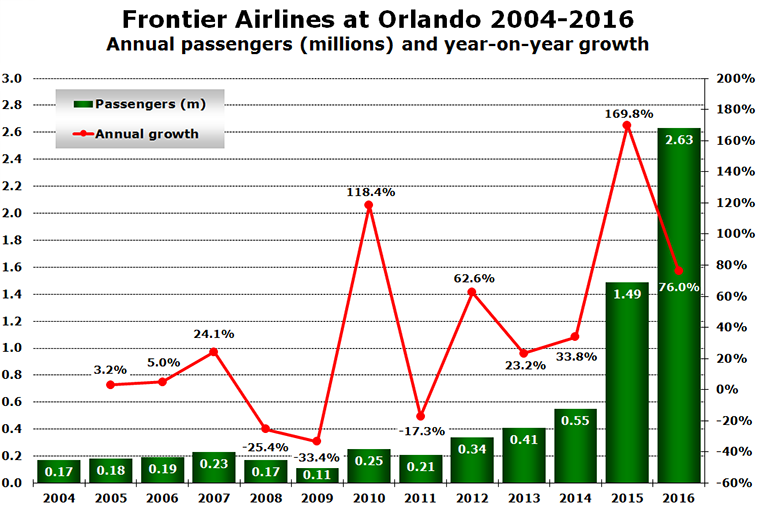 The importance of Orlando to Frontier becomes more evident when you look at the airport’s share of airline traffic. When referring to the US Bureau of Transportation Statistics (BTS), Frontier carried 14.1 million passengers in 2016, meaning that close to 19% of the airline’s traffic will have passed through Orlando. If we look back at 2015, 12.1 million passengers flew with Frontier, with Orlando providing 12% of traffic. In 2014 Orlando’s share of Frontier traffic was just 4.9%, clearly indicating that the carrier is focusing on the city.

Weekly flights up 26% this summer

This summer, Frontier is operating 185 weekly flights from Orlando when referring to OAG schedules, up 26% when compared to last summer. One factor that has resulted in this rise is due to the carrier having added eight new routes when compared to S16, namely: Colorado Springs; Des Moines; Long Island MacArthur (launches 16 August); Madison; Providence (14 August); San Diego; San Juan and Knoxville (3 October). One route that the airline has ended from Orlando in the past year is Dallas/Fort Worth, a sector which the carrier closed on 3 January and had operated three times weekly. 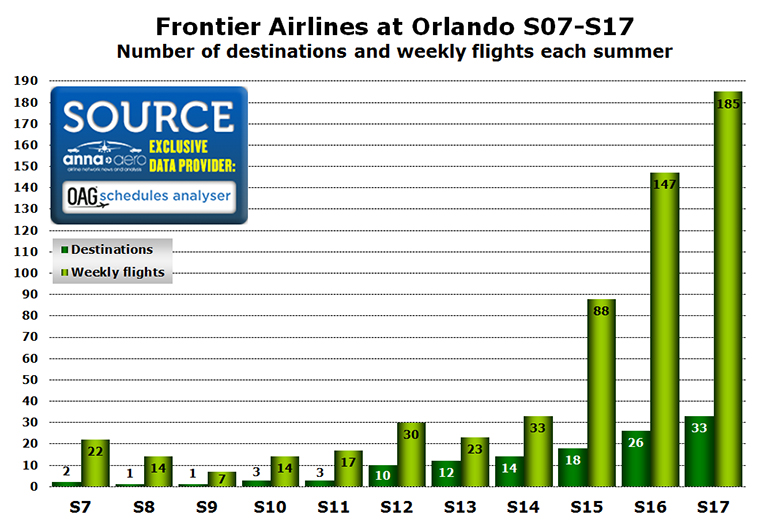 As can be seen, the major part of Frontier’s expansion from Orlando has come since S12. During the past five years, the amount of routes operated from Orlando each summer has grown from 10 to 33, while weekly departures has increased from 30 to 185 this summer. With regards to the average weekly frequency of routes from Orlando, it has risen from 3.0 in S12 to 5.6 in S17.

Orlando, although it is a very important node of Frontier’s network, appears to have only four night-stopping aircraft at the airport this summer: two A321s; one A320; and one A319. The airline currently has 69 aircraft in its fleet according to ch-aviation. So while Orlando has 18% of the airline’s traffic, it is only home overnight to 5.8% of the carrier’s fleet. These four aircraft can be indicated in the airline’s bank structure shown in the graph below. 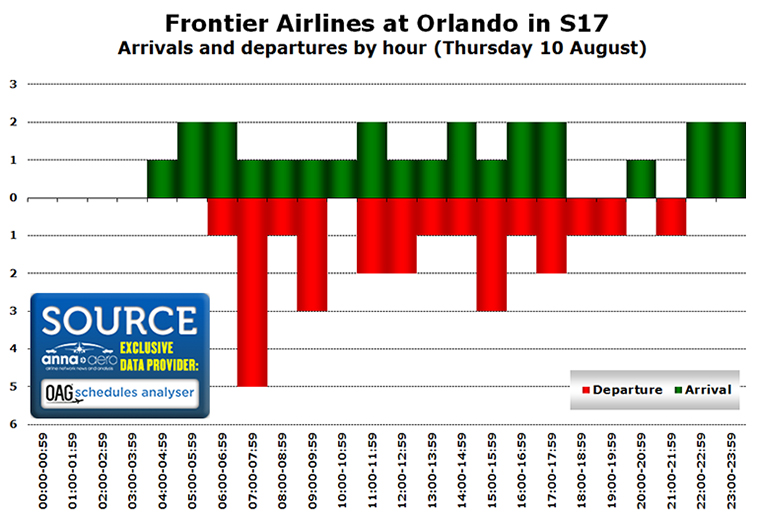 The last Frontier departure from Orlando occurs at 21:50, with four arrivals between then and midnight. By the time of the first departure (06:25), four flights will have already landed at Orlando given the current schedule, with these all being West Coast and Caribbean arrivals, including Las Vegas, Los Angeles, San Juan and Denver, all of which operate daily to Orlando. Overall on the day analysed, there are 50 daily flights to/from Orlando this summer, up from 42 on the same day last year.

Of the routes that Frontier will be adding to its winter schedule, the most interesting is Cancún, with the Mexican resort becoming Frontier’s only international service (aside from US territory Puerto Rico) from Orlando. Along with flights to Orlando, Frontier is also adding routes to Buffalo, Cedar Rapids, Grand Rapids and Oklahoma City, a route that has been served before by the airline from Orlando. 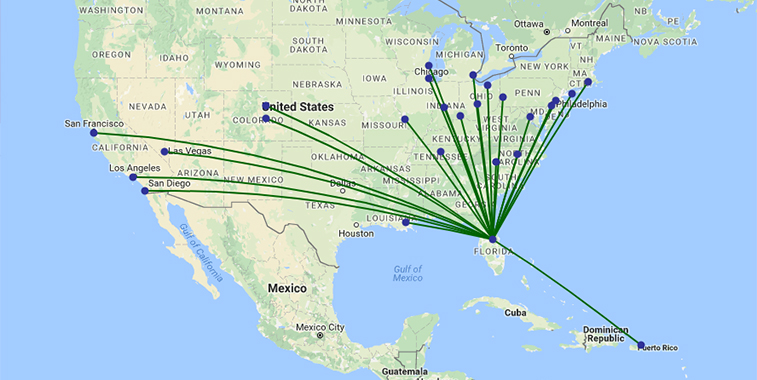 Frontier Airlines’ S17 Orlando route map. For the upcoming winter season, the ULCC will open seven new routes from Orlando, including Cancún, the carrier’s first international destination (aside from US territory Puerto Rico) from the Floridian airport.