Auckland Airport traffic up 8.1% for first half of 2017; handled just under 18.3 million passengers in 2016; five new airlines this summer 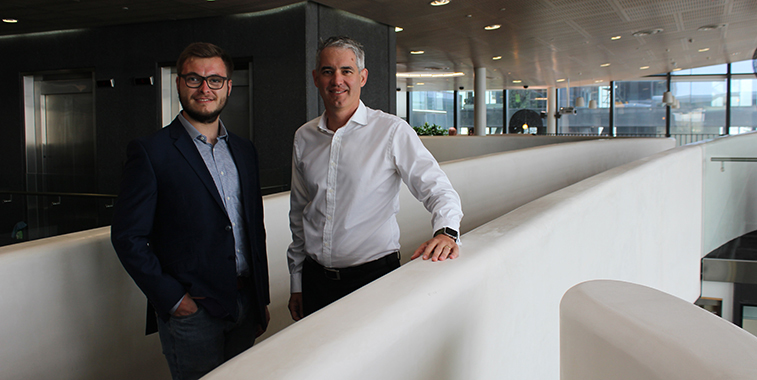 Back in February anna.aero Assistant Editor Jonathan Ford met with Auckland Airport CEO Adrian Littlewood following the inauguration of Qatar Airways’ first flight from Doha. For the first half of 2017, Auckland handled a little under 9.58 million passengers, up 8.1% when compared to the first half of 2016.

Auckland Airport is the gateway to New Zealand, and earlier this year anna.aero’s Assistant Editor Jonathan Ford travelled to the airport to meet with its CEO Adrian Littlewood to discover why the city was booming with regards to route development. Since their meeting, Auckland has published its first-half results for 2017, and the data shows that city’s advancing economy (in Auckland, real GDP for the year ending March 2017 was 4.0% higher than the year ending March 2016 according to the city’s council) is continuing to help the airport prosper.

In H1 2017, Auckland Airport handled just under 9.58 million passengers, up 8.1% when compared to the same six months of 2016 when 8.85 million passengers used the airport. Of those that flew through Auckland between January and June this year, 55% flew on international services and the remaining 45% on domestic flights. This is the same market share that has been experienced for the last few years at Auckland, indicating that international and domestic markets are growing equally. 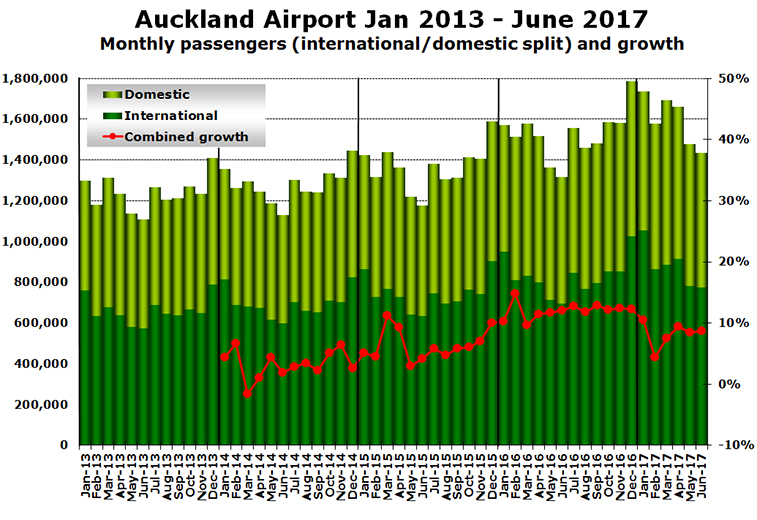 If we place Auckland Airport’s 2016 monthly passenger figures in anna.aero’s Seasonal Variation in Demand (SVID) calculator, it registers a score of 0.67 – an ‘Excellent’ rating. This is an improvement from the 0.70 that the airport scored in 2015, which is also excellent, but worse than the 0.40 it produced in 2014.

Capacity up 7.0% this summer

Auckland in S17 (Northern Hemisphere) has seen its monthly one-way seat capacity increase by 7.0% when compared to S16. The airport’s leading market is the domestic one, which has seen a capacity increase of 8.7% this August. Non-international services overall account for 47% of monthly seats this summer, up one percentage point when compared to the same time last year. Below shows the airport’s top 12 international country markets, with those highlighted in light green indicating country pairs where seat capacity has reduced when analysed with S16. In total, the top 12 country markets account for 93% of capacity from Auckland this August. 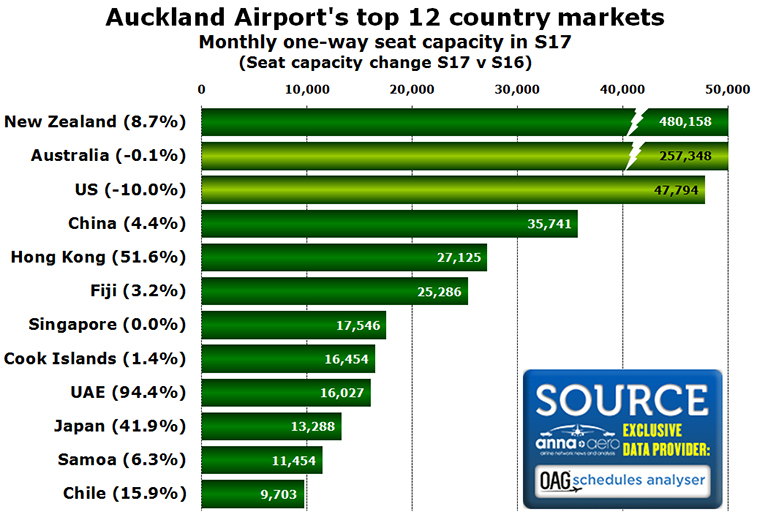 One reason for the reduction in capacity to the US from Auckland is due to United Airlines’ decision to make its service from San Francisco a seasonal operation, however during the time it operates the carrier has increased its weekly frequency from daily to 10 times weekly. Since last year one new country market has arrived on Auckland’s departure board, with Qatar now being served directly thanks to the launch of Qatar Airways’ new daily service from Doha which began in February, a route which anna.aero was fortunate to attend the launch of.

When compared to S16, this northern summer Auckland has welcomed five new carriers. Along with Qatar Airways, Auckland has heralded the arrival of Hong Kong Airlines (Hong Kong), Sichuan Airlines (Chengdu), Hainan Airlines (Shenzhen) and Tianjin Airlines (Chongqing). Of Auckland’s top 12 airlines, the one that is recording the most significant growth is Qantas, which has increased its seat capacity to Auckland by nearly 29% when compared to August 2016, the outcome of it increasing its weekly operation to Sydney from 29 weekly flights to 35. As a result of this growth, Qantas’ market share of seats from Auckland has risen from 4.6% in S16 to 5.5% in S17. 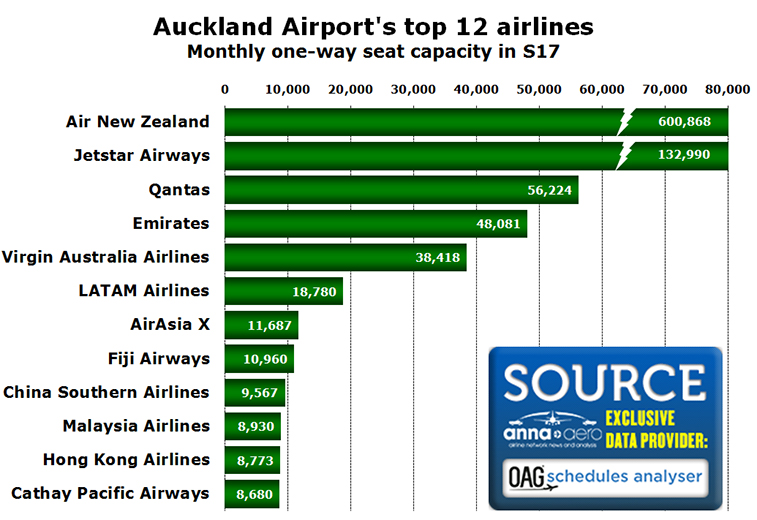 Air New Zealand remains Auckland’s largest airline, with it recording a 5.1% increase in monthly seats this August. The carrier has a 59% market share of S17 capacity at Auckland, however its market share has dropped by 0.8% when compared to S16. During the past year, the airline has opened flights from Auckland to Tokyo Haneda.

Outside of the top 12 the best performing carriers for growth are Air China (17th largest carrier; 31% increase in monthly seat capacity), Korean Air (18th; 18%) and Air Tahiti Nui (21st; 16th), as they are the only airlines to see an increase in monthly seats above 10%. While Auckland has welcomed three new Chinese carriers during the past year, and Air China has increased its presence at the airport, one reason for China’s growth in capacity not being greater than 4.4% is due in part to China Eastern Airlines (27% cut in seats) recording a reduction in seats. 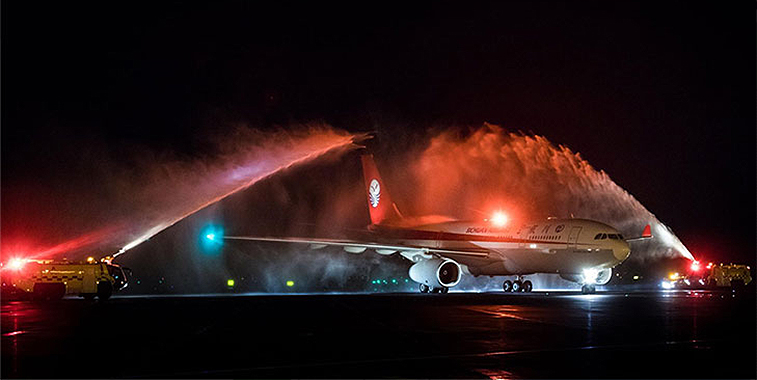 Sichuan Airlines was the latest airline to join Auckland’s carrier roll-call in June when it began services from Chengdu. Sichuan Airlines is one of five new carriers to start services to Auckland in the last year, while China is the airport’s fourth largest country market after New Zealand, Australia and the US, with China’s monthly seats increasing by 4.4%.