Amsterdam overtakes Frankfurt and Istanbul as it aims to catch Paris CDG to become Europe’s #2 hub; Heathrow to have 9.3 million pax lead 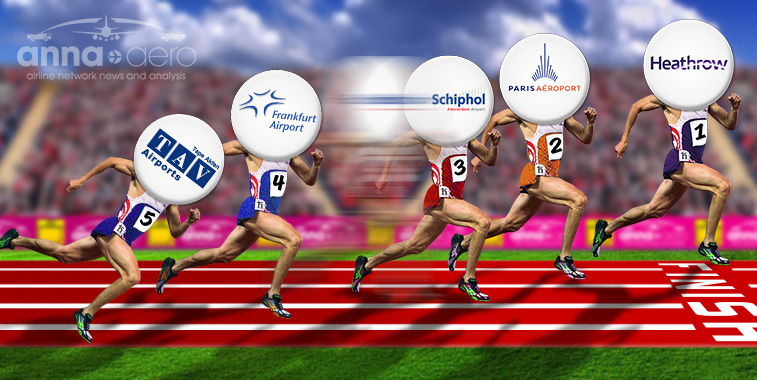 Talk about a photo finish! As the IAAF World Athletics Championship in London finished on Sunday, the UK capital’s biggest airport Heathrow is way out in front with regards to being Europe’s #1 airport in relation to passenger traffic, with its H1 2017 result showing a 3.9% increase, but the race for second place is very close. Stroopwafels, calorific as they may be, are certainly not slowing Amsterdam’s growth, as it appears to be heading straight past Paris CDG to become the continent’s #2 airport. With only 200,000 passengers estimated to split them this year, get those cameras at the ready to exam the results of this tight race. Unfortunately the same cannot be said for Frankfurt and Istanbul Atatürk, with the latter looking like it will be unable to cross the line in this year’s race with a positive outcome.

FLAPI airports – which stands for Frankfurt, London Heathrow, Amsterdam, Paris CDG and Istanbul Atatürk – handled over 326 million passengers in 2016, up 1.5% when compared to 2015. In 2016 the FLAPI hubs combined handled 33% more annual passengers (around 81.74 million more passengers) than they did 10 years ago. Of course this growth has not been evenly split across Europe’s five major gateways, with some performing much better than others in recent years.

Of the five hubs, the best performing in 2016 with regards to passenger traffic growth was Amsterdam, with the Dutch airport delivering a 9.2% rise in traffic, with it handling over 60 million annual passengers for the first time. It has overtaken Frankfurt (traffic down 0.4% in 2016) and Atatürk (down 2.0%) to become Europe’s third largest hub, with it now only 2.31 million passengers behind CDG. 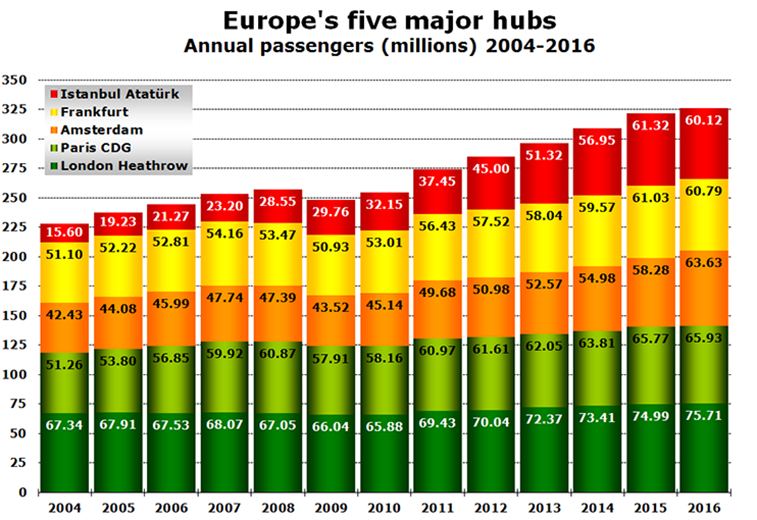 For the first half of this year, FLAPI airports witnessed over 161 million passengers passing through the five hubs combined, up 4.3% when compared to the same period of 2016. The best performing hub in 2017 so far is Amsterdam, with it seeing traffic increase by 8.7% for the first six months of the year to 32.29 million. CDG is second best, with it providing a 5.2% rise in passengers to 32.93 million. Frankfurt is third with a 4.5% upswing to 29.96 million and Heathrow fourth, with the London airport recording a 3.9% increase to 37.14 million. The story is not so positive for Atatürk, with the Istanbul airport showing a 1.0% drop in passengers for H1 2017, to just under 28.69 million. Overall anna.aero predicts that FLAPI airports combined should deliver just over 340 million passengers for 2017 based on current trends for the year so far.

Amsterdam could overtake CDG in 2017 – just!

If the trends of H1 2017 continue into the second half of the year, then Amsterdam will be very close to passing CDG in the rankings to become Europe’s second largest hub. If its 8.7% growth is maintained for the rest of this year, Amsterdam will handle 69.16 million passengers, which is impressive given that in 2015 it handled 58.28 million. That would result in a net increase in annual traffic over the two-year period of more than 10 million passengers. CDG, with its 5.2% growth so far in 2017, could end the year with 69.36 million passengers, which is just above Amsterdam’s predicted total. However, with only 200,000 passengers between the two airports’ 2017 predicted totals (which is below an average day for Heathrow in relation to passenger traffic), it could go either way with regards to which airport claims the second spot in 2017. With that slim margin, it means that second place could be won or lost following a day or two closure due to extreme weather for example. Nonetheless, whichever airport claims the #2 position, it will still be approximately 9.3 million passengers (13%) behind Heathrow’s expected total for the year, which is currently 78.66 million passengers.

Is growth coming from hub carriers?

While the strong passenger numbers are indeed a great sign of Europe’s aviation development with regards to traffic, what these statistics do not show is whether the growth is actually coming from the based hub carriers or not at each airport. To get a sense of just how the FLAPI airports have grown in the past decade, anna.aero has looked at each airport’s hub carrier to see how their market shares and capacity have grown since 2007.

British Airways has increased its market share at Europe’s most congested airport since 2007 by 6.8%, while at the same time its annual seat capacity has grown by 25%, no doubt helped by its acquisition of bmi in 2012, a year when BA’s capacity grew by 8.4% against 2011. It’s hub operation is also helped by the increased capacity being provided by fellow oneworld members, with carriers in the alliance increasing their seat capacity at Heathrow in 2016 by over 10% when compared to 2015. In total last year BA, along with oneworld members, had close to a 58% market share of seats from Heathrow, up from 51% in 2007. 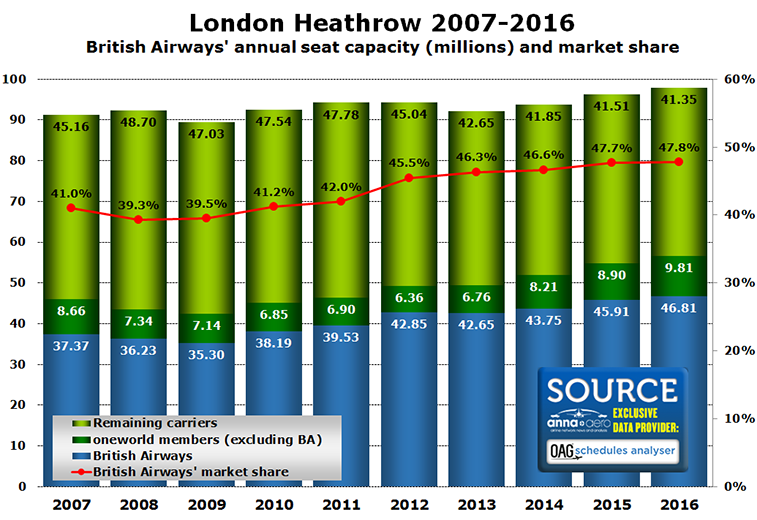 What has also helped BA to increase its presence at Heathrow is the reduction in seats by non-oneworld airlines, with those carriers in 2016 operating 3.8 million less seats than they did from Europe’s busiest airport in 2007. This year BA could see its market share increase further, with the carrier having added 11 routes to its S17 schedule, including long-haul services to New Orleans and Santiago, with the last route launch being Tenerife South in early October, starting just in time for W17/18. For winter the airline is scheduled to launch flights to Grenoble and Turin from Heathrow, while for S18 the British flag carrier has already confirmed that it will begin services to Nashville on 4 May.

In 2016 Air France operated 41.9 million seats from CDG, over two million less than it operated from the French hub 10 years ago. Last year the French flag carrier’s seat capacity from CDG reduced by 0.9% when compared to 2015, while SkyTeam airlines (excluding Air France) increased their presence at the airport by 5.9%, with the alliance partners helping its French member to enhance its hub operation. When referring to OAG schedules, in 2016 6.3% of Air France’s seats from CDG were flown by HOP!. 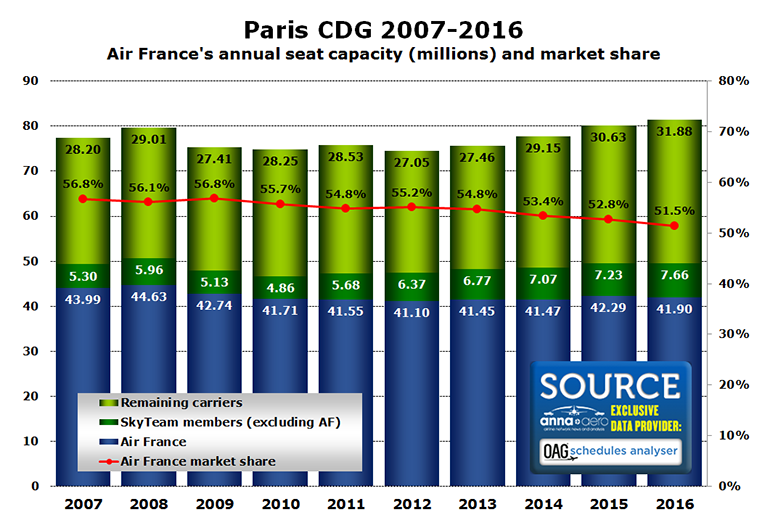 Most of the growth at CDG in recent years has come from LCCs, including easyJet, which provided an 11% increase in seat capacity in 2016 from the airport when compared to 2015. In addition, Norwegian has entered the low-cost long-haul market from CDG last year. The carrier already operates to four US destinations from the French capital, while it will add Boston, Denver, New York Newark and Oakland in 2018. Further LCC penetration will come in S18 with the arrival of Primera Air which will also serve Boston and Newark, putting further pressure on Air France across the Atlantic.

Majority of growth coming from non-SkyTeam carriers at Amsterdam

KLM in 2016 recorded its lowest market share of capacity from Amsterdam this decade, down to around 48%, while in 2007 it was close to 49%. Despite its loss in market share, KLM has at the same time increased its annual seat capacity by just under 30%, while SkyTeam members have increased their annual seats by 26% when compared with the same metric 10 years ago. 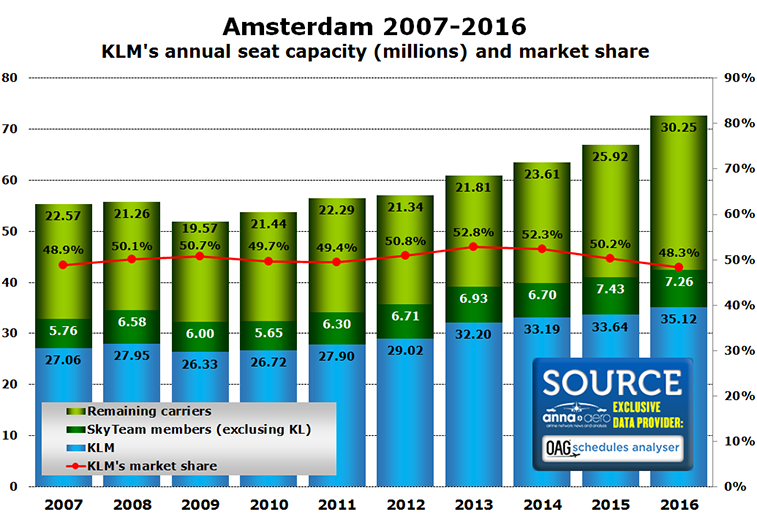 Most of Amsterdam’s growth to become Europe’s third busiest airport has been generated by the influx of LCCs, similar to what is being seen at fellow European SkyTeam hub CDG, with the likes of easyJet, which delivered a 19% increase in seats in 2016 when compared to the year before, Transavia (up 23%) and now even Ryanair (now serving Malaga along with Dublin) increasing their networks respectively.

Lufthansa had just under a 65% share of seats from Frankfurt in 2016, with its market presence decreasing by 0.7% against its 2015 result. Looking at the three airports which sit above Frankfurt in the rankings, Lufthansa’s market share is much greater than BA at Heathrow (48%), Air France at CDG (52%) and KLM at Amsterdam (48%). 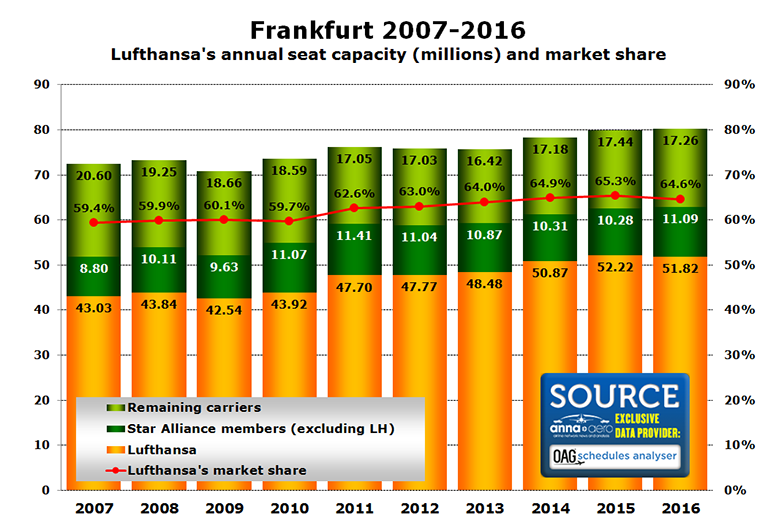 Like Heathrow, one factor which has allowed Lufthansa to maintain its market share at Frankfurt is due to the reduction in seats from non-Star Alliance members, with their results indicating a 3.33 million cut (down 16%) in annual seats in 2016 when shown against the same figure in 2007. However, the German mega-hub may see this figure surge again in 2017, particularly following the arrival of Ryanair which for this upcoming winter will have seven-based 737-800s at the airport, with it having only begun service to Frankfurt in April with two stationed aircraft.

Atatürk is by far the most interesting hub for development of Europe’s top five, with its 2016 annual passenger traffic increasing by 285% when compared to 2004, a year when the hub welcomed just 15.6 million passengers. Turkish Airlines is the dominant performer at the airport when it comes to expansion during the past decade, however its fellow Star members (Turkish joined Star in 2008) are in (temporary) retreat at the Turkish hub, with the alliance’s seat capacity (excluding Turkish) showing a 23% drop in seats last year when compared to 2015. 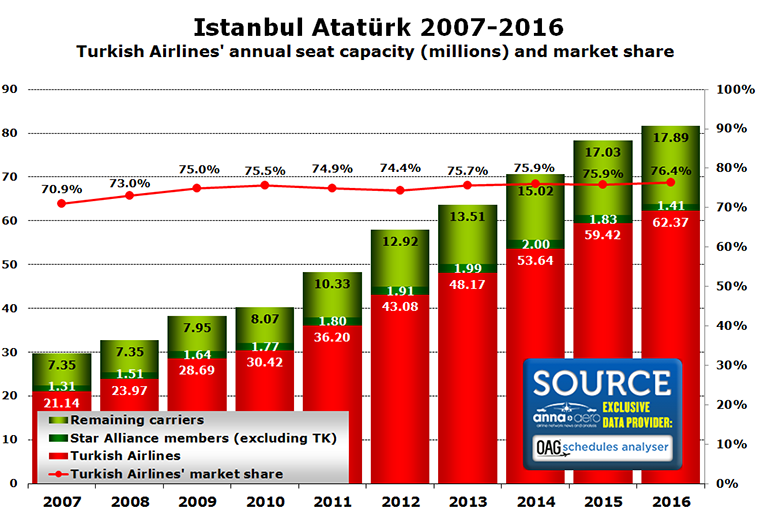 Despite reductions in recent years from fellow Star members, most of the airport’s growth has come from Turkish, with it recording an average increase in annual seats of 13% during the past decade. Last year the carrier offered a whopping 41.2 million more seats than it did in 2007. In relation to just hub carriers, Turkish is by far the largest in Europe, with it offering 20% more seats through Atatürk in 2016 than the second largest hub carrier, Lufthansa at Frankfurt (51.8 million seats). 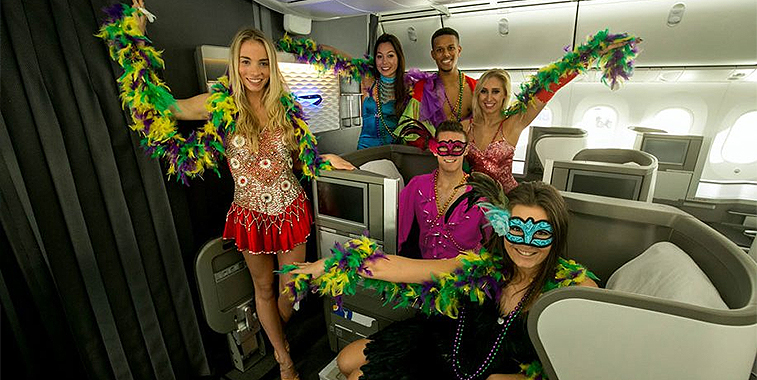 British Airways brought the spirit of Mardi Gras to its launch of services to New Orleans earlier this year, one of 11 new routes for the airline from London Heathrow in S17 according to OAG schedules. Despite it not having a stronger market share than its other European hub carrier rivals at their respective homes, BA is helping contribute to London Heathrow’s growth, with it recording a 25% increase in annual capacity from the UK airport over the past 10 years. For H1 2017, Heathrow is showing a 3.9% increase in passengers, with it handling 10 million more people a year than second place Paris CDG.