Boeing has a 46-unit advantage over Airbus in regards to deliveries for the first half of the year; easyJet welcomes its first of 130 A320neos 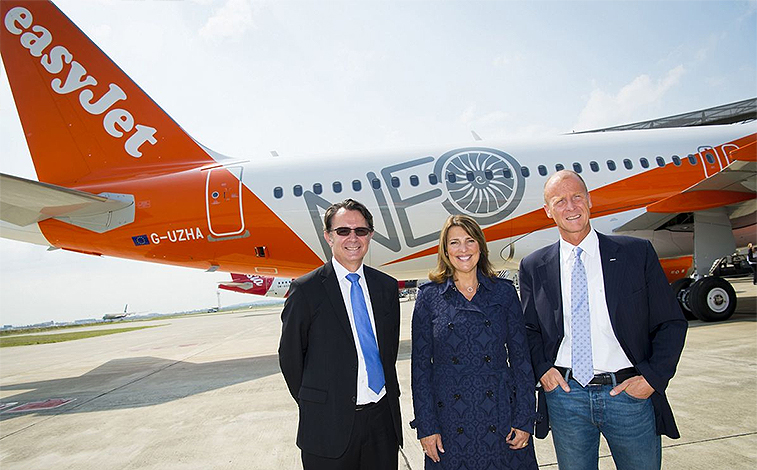 In June easyJet welcomed its first A320neo, which was also coincidentally the airline’s 300th Airbus aircraft. Seen at the delivery ceremony in Toulouse are: Gaël Méheust, CEO CFM international; Carolyn McCall, CEO easyJet; and Tom Enders, CEO Airbus. The airline has an order for 130 A320neos. To mark the occasion, and to distinguish the neo fleet, the aircraft has been specially designed with a neo logo on the fuselage.

During the sixth month of this year Boeing and Airbus combined delivered 139 aircraft, down three units from the total they achieved in the same month of 2016. The achievements of June are better than those managed in May however, with only 116 units delivered in the previous month. Having distributed more aircraft than Boeing in the fifth month of 2017, Airbus fell short in June, handing over 64 units compared with the 75 managed by its US rival. With that, it means Boeing has opened its lead over Airbus in the 2017 delivery race so far to 46 units (up until 30 June). In total, both companies have delivered 658 aircraft so far this year. This is compared to the 673 both manged at the same point in 2016, highlighting a 2.2% reduction in productivity for H1 2017. In June 29% of unit deliveries from both companies were for wide-body variants, with the remaining 71% narrow-body. This compares to the 30% wide-body, 70% narrow-body ratio recorded in June 2016. 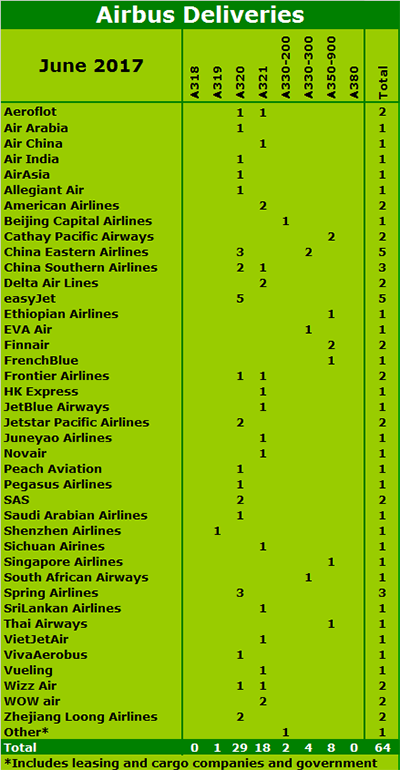 Airbus delivered 64 aircraft in June, up four units from the 60 it delivered in May, and equal to what it achieved in the same month last year. For the sixth month of 2017, single-aisle deliveries were led by the A320 (29 units) followed by the A321 (18), while one A319 was delivered to Shenzhen Airlines according to the manufacturer’s June 2017 delivery report. The leading customer of the A320 was easyJet which received five, with that also including the carrier’s first A320neo, one of 130 that the airline has on order. Following easyJet, China Eastern Airlines and Spring Airlines were the next largest recipients of the A320, with both Chinese airlines collecting three each respectively. The leading customers of the A321 were American Airlines, Delta Air Lines and WOW air, with all three picking up two units each.

In relation to the wide-body market, Airbus delivered 14 units in June, the same level it achieved in the month before, but two more than it managed in June 2016. The leading aircraft type for the third month in a row was the A350, with eight being handed over to six carriers, with Cathay Pacific Airways and Finnair (both oneworld members) being the top customers, with the Hong Kong- and Helsinki-based airlines welcoming two units each respectively. While all three MEB3 carriers – Emirates, Etihad Airways and Qatar Airways – all received one A380 each in May, zero A380s were distributed in June. Unlike the European Manufacturer’s largest aircraft, four A330-300s and two A330-200s were delivered in the sixth month of this year. 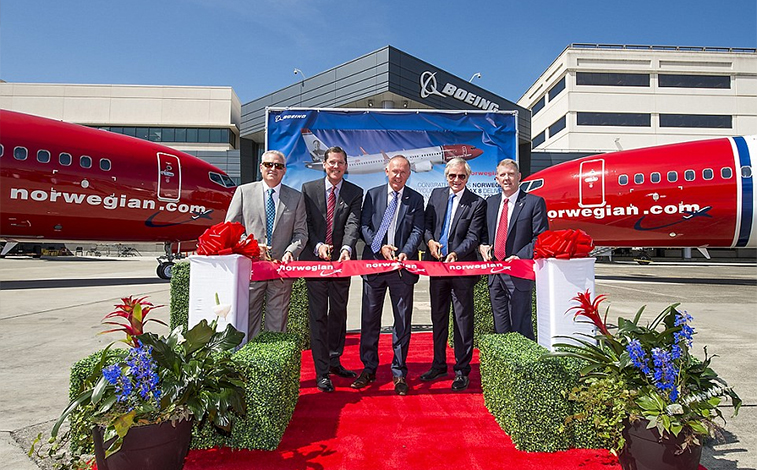 Norwegian took delivery of its first two 737 MAX 8s in June. To herald the arrival of the aircraft into the carrier’s fleet, a ribbon cutting ceremony was performed at Boeing’s headquarters in Seattle, with the airline’s CEO Bjørn Kjos (second-right) taking part in the proceedings. “We have been eagerly awaiting the delivery of our 737 MAX 8s, and we are overjoyed to have it join our fleet,” said Kjos at the delivery ceremony. “We are the first European airline to operate this brand-new aircraft, and we’re also the first in the world to operate it to/from the US. This aircraft allows us to open up new, unserved routes and offer customers even more affordable transatlantic fares.” 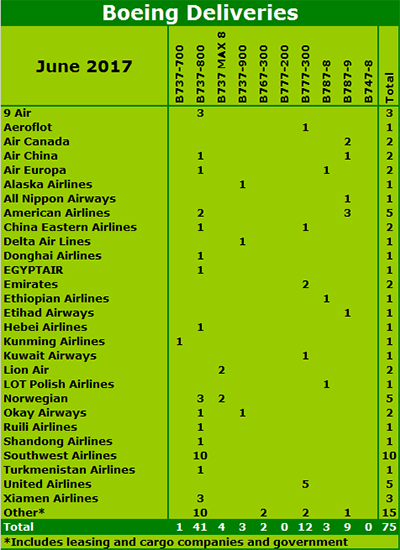 Boeing delivered 75 aircraft in June, of which four were the airline’s new 737 MAX 8, bringing to six the amount the US company has delivered so far this year. While Norwegian collected two of the type, it did not stop the European LCC from receiving three 737-800s, the most popular narrow-body aircraft to be delivered in June. The main customer for the 737-800 was Southwest Airlines which picked up 10 units. In total for June, Boeing handed over 49 narrow-body aircraft, one less than Airbus achieved. However the result is four units better than Boeing managed in June last year. Along with the 737-800 and 737 MAX 8s, one 737-700, delivered to Kunming Airlines, and three 737-900s were also delivered in June. 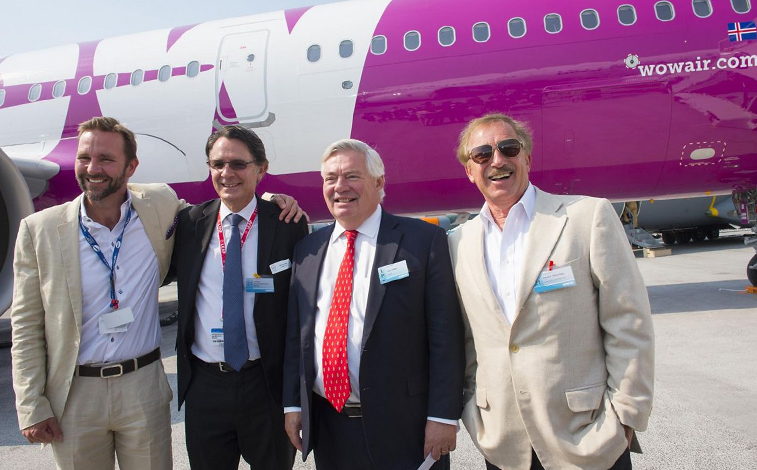