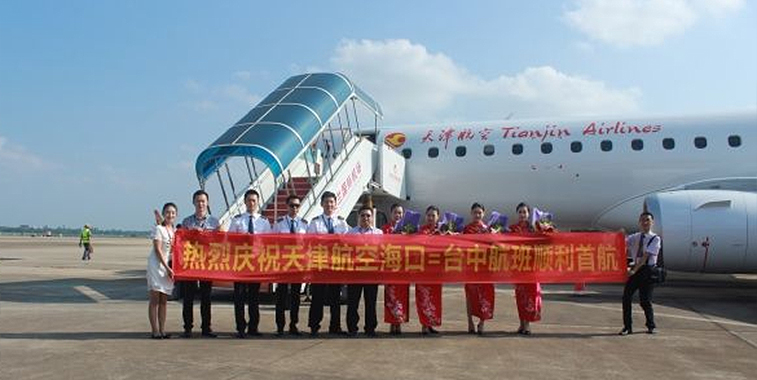 Tianjin Airlines launched flights between Dalian and Kitakyushu on 6 October last year, with the route being celebrated at the former airport, which also welcomed 15.26 million passengers in 2016, up 7.8% on the year before. The domestic sector has seen a 12% increase in seat capacity this summer when compared to last year, while the international market has witnessed a capacity cut of 7.5%. International markets include Japan, South Korea, Hong Kong, Vietnam and Thailand.

Dalian is a major city and seaport in the south of Liaoning Province in China, with it being the province’s second largest city after Shenyang. As a commercial centre, it seems to be on the move fast, with Dalian’s GDP in 2016 growing by 6.5% to around US$119.76 billion according to the Dalian Statistical Report for Economic and Social Development. Overall Dalian registers eighth among Chinese cities in terms of overall economic strength, with IT and finance being among the fastest-growing sectors.

Dalian growing slower than the average

When referring to CAAC data, China’s top 25 airports in 2016 achieved an average rise in traffic of close to 12%, however Dalian during the same period, as already stated, saw traffic increase by only 7.8%. In 2014 (highlighted in light green) Dalian went further against the trend of China’s top airports by delivering a downturn in passengers, with numbers dropping by 3.8%. That year Dalian was the only airport in the top 25 to see a decline in passengers, with the mean growth in 2014 being 11%. 2012 was the last time that Dalian performed better than the norm, with average growth among China’s top 25 airports that year being 9.3%, while Dalian registered a traffic increase of 11%. 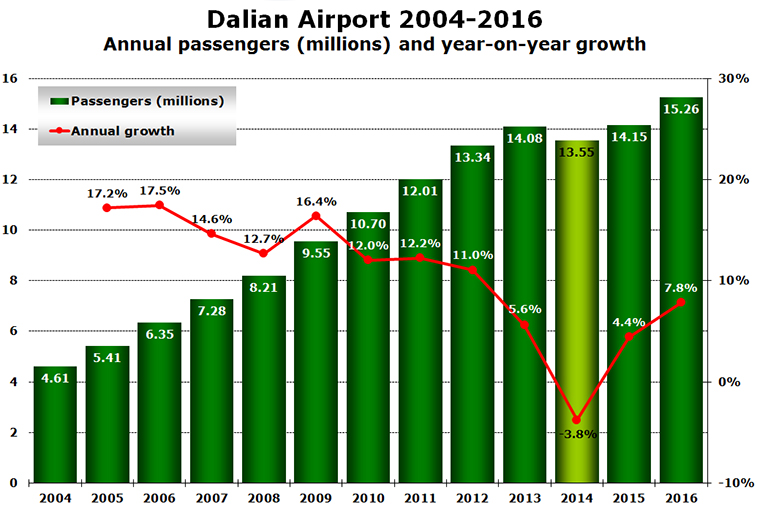 Since 2004 Dalian has recorded an average year-on-year increase in traffic of 11%. Between 2005 and 2010, the average year-on-year increase from Dalian was 15%, while from 2011 to 2016 it was only 6.2%, confirming that the growth rate has halved over the latter half of the decade. However, reviewing the airport’s performance in the past few years suggests that Dalian is starting to expand faster again.

Dalian’s leading airline is China Southern Airlines, with the SkyTeam carrier controlling 23% of the market from the airport in relation to seats in S17. This is a market share which has dropped from 27% in S16. One factor that has led to China Southern’s market share fall is due to the airline reducing its seat capacity from Dalian over the past year by 6.8% when referring to OAG schedules, while a further four of the airport’s top 12 carriers (all highlighted in light green) are also showing capacity cuts. 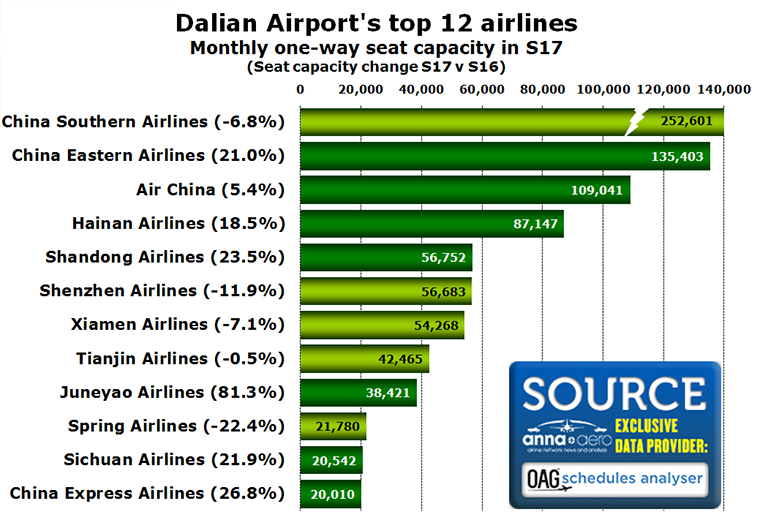 Overall monthly seat capacity to Dalian this summer has increased by just over 10%. Of the 1.09 million monthly one-way seats on offer from the airport in S17, only 8.3% are flown on international routes. Non-Chinese routes in S16 accounted for 9.9% of seats, with international seats decreasing by 7.5% since this period. This is in contrast to the domestic market which provided an increase in capacity of 12% over the past year. The only international non-stop markets from Dalian in S17 are Japan (seven routes), South Korea (Seoul Incheon), Hong Kong (Hong Kong), Vietnam (Nha Trang) and Thailand (Bangkok Don Mueang). It should be noted that Singapore is served from Dalian on Scoot, a route which began in October 2016, however this service operates via Qingdao.

Highlighted in light green below is Seoul Incheon, the only international market to make it into Dalian’s top 12 routes, placing in 10th spot. The link to the capital of South Korea occupies 37% of all capacity on international services from the Chinese city this summer. Looking back to the domestic sector, Shanghai Pudong and Beijing lead the route charge, with the links to the two most prominent cities in China accounting for over 19% of all monthly seats. Overall, the top 12 connections account for 60% of all seats from Dalian during S17. 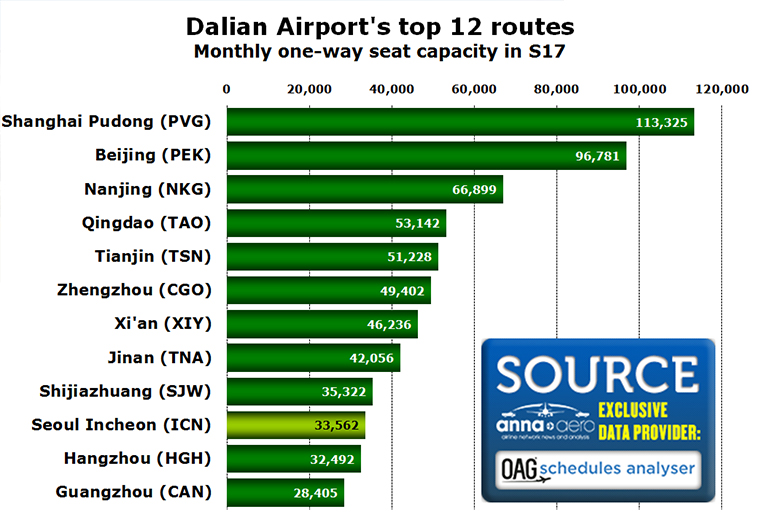 A new airport is currently under construction in Dalian, and what makes it so unique is that it will be the largest airport in China, and indeed the world, to be built offshore on reclaimed land, with the island expected to be 21 square kilometres. Dalian Jinzhouwan International, the name of the new airport, is expected to be open in 2018. The facility is being built in two stages, with the first stage comprising a 400,000 square-metre terminal and two runways, designed to handle 31 million passengers and 650,000 tons of cargo per annum. Once this capacity has been reached, two more runways will be built in the second phase and once they are finished, with no firm date of construction for phase two yet given, the airport will then have the capacity to handle 70 million passengers a year, as well as one million tons of cargo based on reports published in 2013. 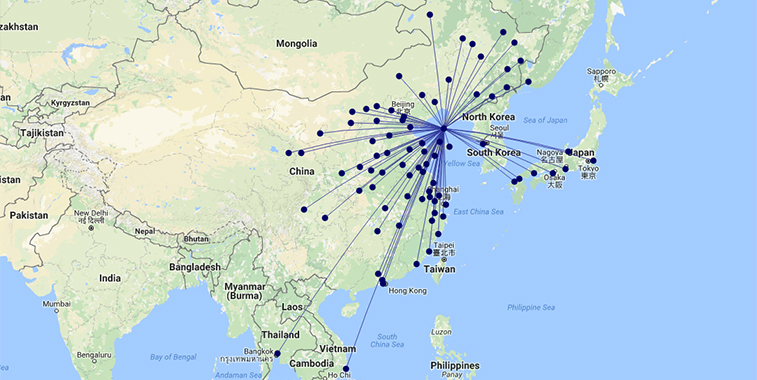 Dalian Airport route map in S17. Only 8.9% of Dalian’s monthly seat capacity this summer is flown on international services, down from a 9.9% share the market had in S16. International markets served from Dalian non-stop this summer include Japan, South Korea, Hong Kong, Vietnam and Thailand.