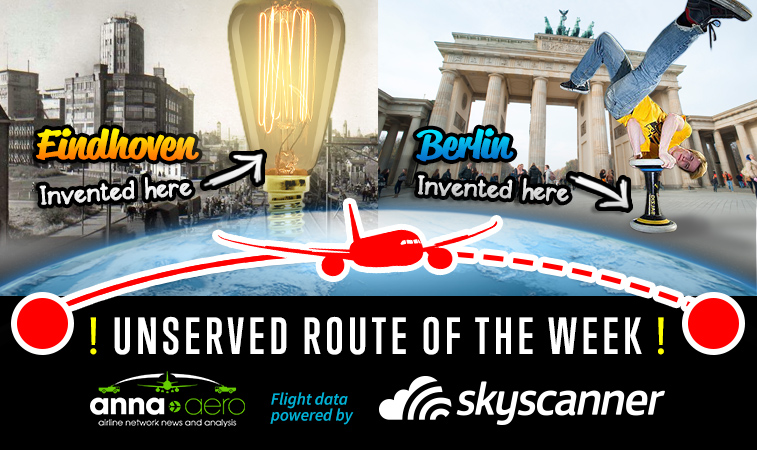 Eindhoven and Berlin are two cities renowned for its innovation over centuries, be it the humble light bulb or the more radical sporthocker. Despite this dynamic entrepreneurial spirit and creativity these two cities do not have a direct air link, however with over 75,000 travellers searching for flights between Eindhoven and Berlin this situation may not last for long.

With over 75,000 searches in the last year, a potential city pair from Eindhoven to Berlin has been identified as this week’s “Skyscanner-anna.aero Unserved Route of Week” – a powerful analysis based on aspirational data captured from the Skyscanner.net flight comparison site used by +60 million unique visitors per month. “The reason for this demand, apart from the fact that Berlin is a key tourism destination in Europe, is that the German capital also has a strong hi-tech and start-up climate like Eindhoven and the North Brabant region,” says Dean Boljuncic, Head of Route Development at Eindhoven Airport. “A connection between the two would combine the best of both worlds: a business world connecting two strong business regions; and also a leisure world.” 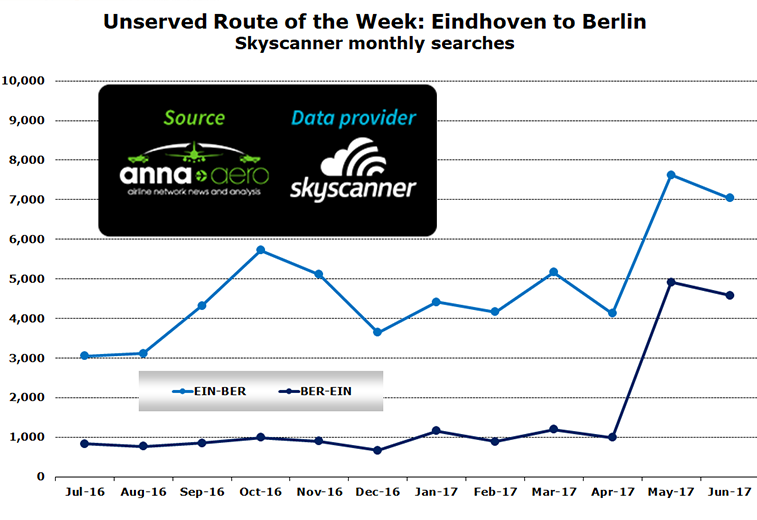 anna.aero recommends Ryanair or easyJet to start this link

Skyscanner demand on this week’s unserved route shows a significant bias towards the Eindhoven end of the city pair, with a 75/25 split, so on this basis we looked at potential carriers at the Dutch origin first. Europe’s largest airline, Ryanair, is the biggest carrier at the airport, with Eindhoven being its 29th largest base in terms of weekly seats, commanding 43% of capacity at the facility according to OAG data for the week commencing 18 August. The ULCC currently offers 37 destinations from Eindhoven, spread across Europe and North Africa. Perhaps given the two nation’s close geographical proximity, it is not surprising that Ryanair does not fly to any German cities from its biggest Dutch base – or indeed from either of its other two operations in the country (Amsterdam and Maastricht). However, given its #1 position at Eindhoven, and the near 600-kilometre sector length to Berlin, a service linking the two cities, as a result of this Skyscanner data now being made public, could be among the first routes implemented should Ryanair decide to launch flights between the Netherlands and Germany.

Eindhoven’s second largest carrier is Transavia (32% share of weekly capacity), and with 21 direct destinations, it is the LCC’s third largest base, behind Amsterdam and Paris Orly (when including the former Transavia France operations). A bit like Ryanair, it has no flights to Germany from Eindhoven, but it does offer city break destinations like Barcelona, Copenhagen, Lisbon, Nice, Stockholm and Valencia, a group of routes into which Berlin would seemingly fit neatly. However unlike the Irish ULCC, it does have two existing German routes operating from the Netherlands, Rotterdam to Berlin Schönefeld and Amsterdam to Munich, so a move onto this city pair may well be a less risky option for Transavia than for its rival. 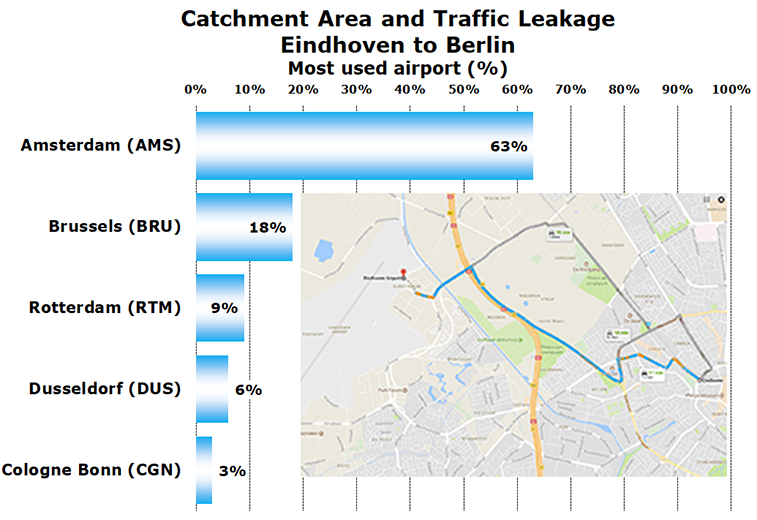 Faical Allou Skyscanner’s Business Development Manager says: “Eindhoven serves less than 1% of the catchment (50 km around the airport) going to Berlin. With better service, such as a non-stop operation, Eindhoven will capture most of that traffic currently leaking to competing airports.”

Considering the Berlin end of the route, Tegel’s largest carrier (42% share – increases to 46% if NIKI is included) is troubled airberlin, which presently flies to 35 destinations this summer, rising to 48 routes when the operations of NIKI (flying predominantly to Spain and Greece) are included. However, given the carrier’s current predicament, long-term survival is probably the most pressing issue at the moment rather than looking at new route opportunities. That said, according to anna.aero’s New Route Database, it does have two proposed routes in the pending file, with long-haul links from Düsseldorf to Toronto Pearson and Chicago O’Hare penciled-in (presumably very lightly) for next May.

Lufthansa (10% of weekly seats) is the #2 carrier at Tegel, however it services are limited to its numerous daily domestic flights to Munich (69 times weekly) and Frankfurt (99 times weekly). If the operations of Lufthansa Group airline Eurowings (including germanwings) are also represented in these statistics, then the combined share increases to 22% of weekly seats, while destinations served totals 24. However, yet again the Netherlands is missing off the network map for the Lufthansa Group carriers. Looking at the 22 routes being flown by Eurowings (or germanwings) from Tegel, a service to Eindhoven would not seem to fit into the carrier’s current network strategy, as it focuses mainly on domestic and full-leisure services.

Looking across the German capital to Schönefeld, it is dominated by Ryanair (39.2% share) and easyJet (38.5%), so both carriers are very close in terms of who can claim top spot. While the #1 carrier, which has a network of 46 destinations from its 10th biggest base, is perhaps unlikely to consider an Eindhoven link an option, particularly as it currently offers no Dutch flights from the airport, the same cannot be said of the UK-based LCC. It offers 48 airport pairs from Schönefeld, including a 17 times weekly service to Amsterdam. With this existing presence in the country market pair, it is perhaps the most likely of the four carriers at the German end of this potential route to consider the Eindhoven-Berlin sector.

Everyone uses a different airport to fly to Berlin or Eindhoven

When looking at the previous year of search data, the busiest month for potential traffic flows (for both directions on the route combined) is May 2017, with over 12,500 searches, more than 8,500 higher than the lowest monthly figure, which was recorded in July 2016 (3,900 searches). The seasonality profile of this search data is more extreme than the last Unserved Route of the Week (Zurich to Colombo) with the low-month traffic representing just 31% of the highest month. According to OAG Traffic Analyser, as already determined by the catchment analysis above, passengers who did want to travel between Eindhoven and Berlin in the last 12 months have driven to an alternate airport to catch a direct flight instead.

Indeed, an O&D that is not served by a non-stop flight will typically display a low purchase rate and low traffic. In this instance Skyscanner’s Travel Insight indicates a monthly average of 0.6% for the Eindhoven to Berlin route (see graph below). Therefore, if there was an Eindhoven to Berlin service, and if bookings performed in line with the “Skyscanner market average” for direct services at both airports (7.5%), the airline operating this route could immediately expect an improved purchase rate of a whopping 1,256%, without any increased marketing spend. However, with over 75,000 annual searches in the past year, a daily service should be immediately viable for the airline selecting to start this potential city pair. “Our analysis, combined with GDS data, shows that the city pair has a huge potential, with an expectation of a 95% LF with a daily flight with a C-category aircraft,” concludes Boljuncic. 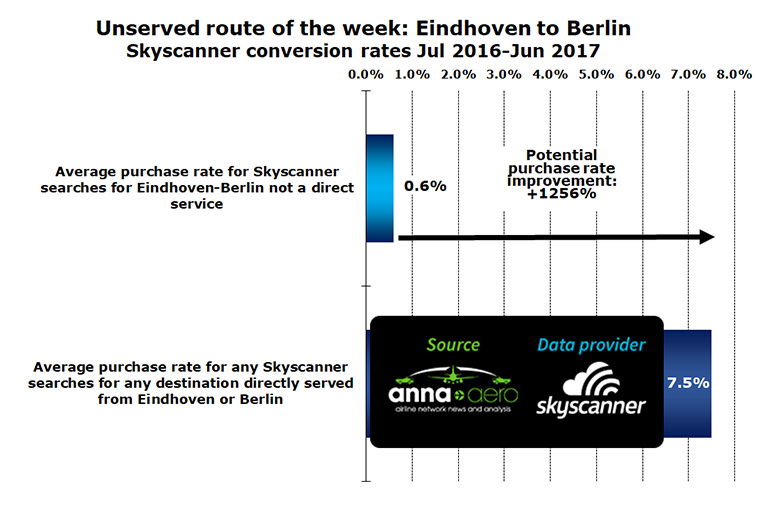