Auf Wiedersehen airberlin? Germany’s third largest airline will leave a dent of over 25 million seats and a prospering transatlantic network 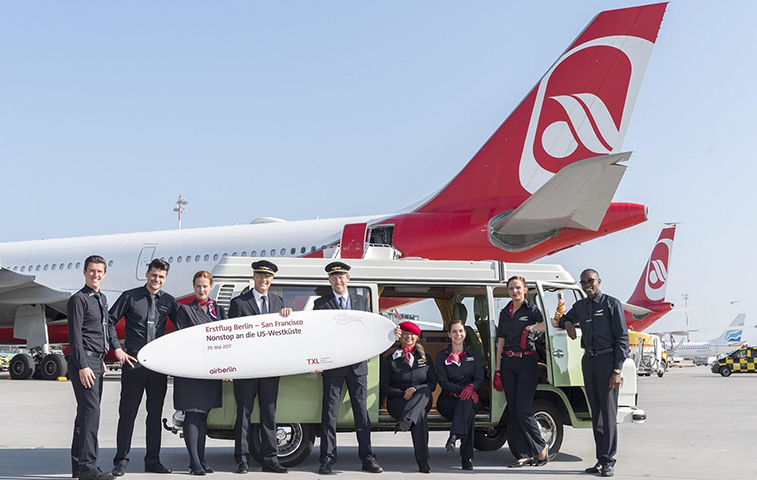 One of the few routes launched by airberlin in S17 was in May, when it began a connection between Berlin Tegel and San Francisco. This summer capacity to the US has increased by 46% with the carrier, while passengers to the US with airberlin passed the one million mark for the first time in 2016, a rise of 16% when compared to 2015. Looking at the carrier’s shift in capacity in recent years, the US has certainly been a high priority, with it now the airline’s third largest country market after its home nation of Germany and Italy, which have both seen cuts this summer.

The talk of the aviation world at the moment is airberlin, with the carrier now filed for bankruptcy after its biggest shareholder, Etihad Airways, withdrew its financial support to the carrier. This is not the first airline this year that had a majority share held by Etihad to enter bankruptcy, with Alitalia going through a similar process in April, and it is still awaiting a buyer. Etihad, which has a 29% stake in airberlin, said the airline had deteriorated at an unprecedented pace, preventing it from overcoming its significant challenges. The airline is expected to continue operating during the administration process thanks to a €150m loan from the German Government. It is understood that German flag carrier Lufthansa is in talks to buy part of the airberlin Group, which owns airberlin, NIKI and Belair, however nothing has been confirmed by either party. So with that, how has airberlin reached this position? Well to begin with, anna.aero has looked at the past few years to see how the carrier’s passenger traffic has changed.

Monthly traffic shrinking on average by 15% in 2017

Between January and July this year the airberlin Group airlines have carried 13.79 million passengers, down by over 16% when compared to the first seven months of 2016. The past few years have not been promising for what now seems to be a doomed group, with it not producing positive growth in monthly passengers since March 2015 (highlighted in light green). This year seems to be the most impacting on the airberlin Group in recent history in relation to traffic, with July 2017 being the worst month, seeing passenger numbers fall by 24%. The drop in traffic correlates with airberlin’s 24% cut in seat capacity for 2017 (explained below). 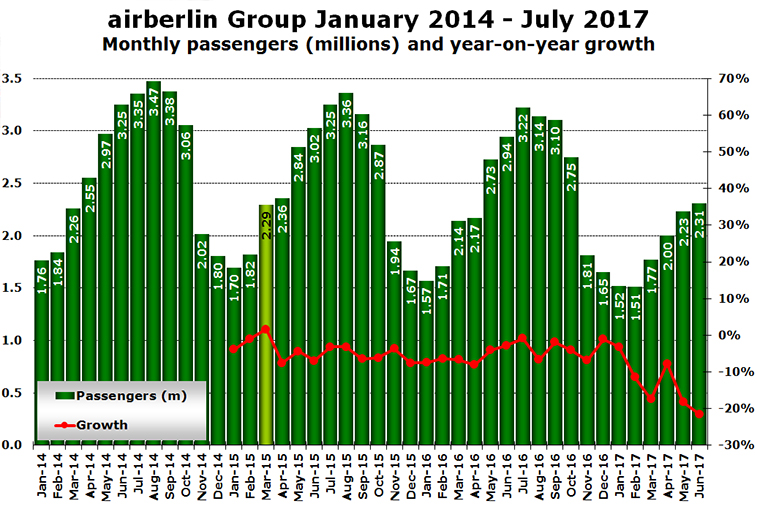 Currently airberlin is Germany’s third largest airline, after Lufthansa and Eurowings (including germanwings operations), with it offering 9.19 million seats from the nation this summer. This compares to Lufthansa’s 31.8 million and Eurowings’ 11.9 million.

Issues since the acquisition of LTU

Looking at seat capacity for airberlin going back to 2007, the carrier seems to have encountered issues since it acquired LTU, a deal completed in 2009. airberlin has had many business ventures since this one, which allowed it access to the long-haul market, with new deals and mergers taking place over the past number of years, with the most noticeable being Etihad’s 29% investment in the carrier in December 2011. However, looking at the past decade, it seems that the long-haul market has been the main focus of airberlin’s growth ambitions, with the long-haul network in 2017 occupying 9.7% of airberlin’s capacity, up from 1.1% in 2009 when it took over LTU. Overall seat capacity has dropped by close to 25% this year, with 25 million seats on offer. 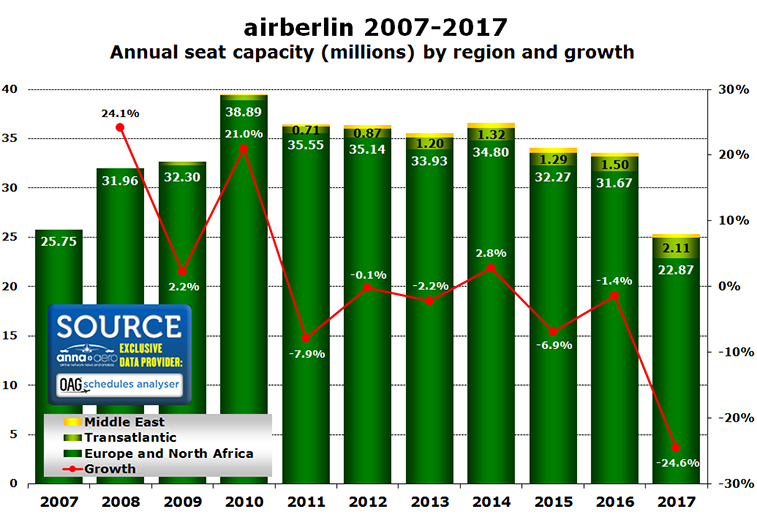 Never truly known what type of carrier it is

Despite numerous management changes in recent years, the carrier, which boasts a fleet of 100+ aircraft, and carried 28.92 million passengers in 2016, having eclipsed 30 million passengers during the last seven years before that, has tried to be a carrier for all people, ranging from having a hub-and-spoke network to being an LCC. However in recent years its focus has been long-haul, no doubt trying to mirror the strategy of Eurowings over the Atlantic.

Long-haul focus pushes US up the rankings

The impact of Eurowings on the transatlantic market has surely been the reason for airberlin’s thrive to succeed in the sector, with the US seeing a 46% rise in seats this summer when compared to S16. The US has even overtaken Austria, home to airberlin’s NIKI unit. A market which has taken a serious beating from airberlin is its home nation of Germany, with it encountering a 28% reduction in seats this summer. 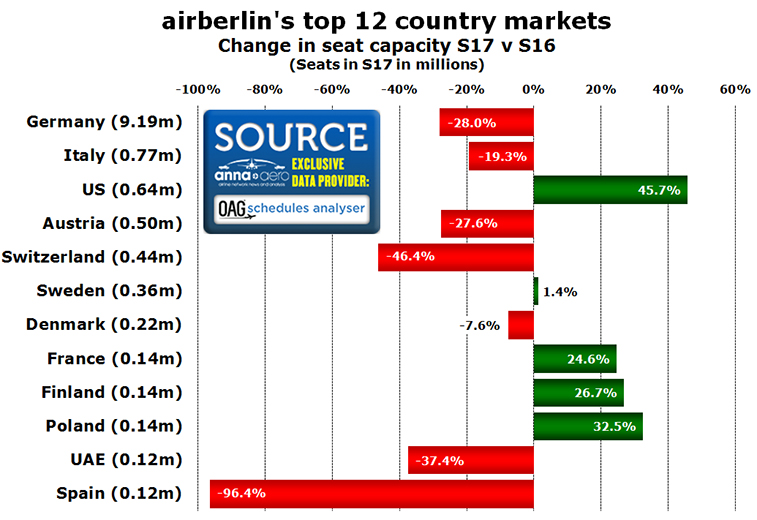 However, the biggest cut in capacity has been to Spain, with airberlin this summer only flying a three times daily operation from Düsseldorf to Barcelona. NIKI has took a majority of airberlin’s operations on between Germany and Spain, with it serving 42 routes on the country connection this summer, on 414 weekly flights according to OAG schedules. 14 of those routes, and 79% of weekly NIKI flights from Germany to Spain, operate to Palma de Mallorca.

While the US has been the leading nation for growth for airberlin during the past year, the carrier’s investment in the market has somewhat effected its overall figures for its transatlantic venture. When airberlin began serving the US as its own brand in June 2009, it achieved an average theoretical load factor that year of 91% (comparing BTS data alongside OAG schedules data). This compares to the 81% it recorded for 2016, a 10 percentage point drop. Despite this, the airline has maintained a respected average load factor to the US between 2015 and 2016, with it also increasing its passenger count in the market by nearly 16% to over one million annual passengers. In S17 the airline is offering 12 routes between Germany and the US from Berlin Tegel and Düsseldorf, this compares to the four routes it flew from the latter airport in S09. 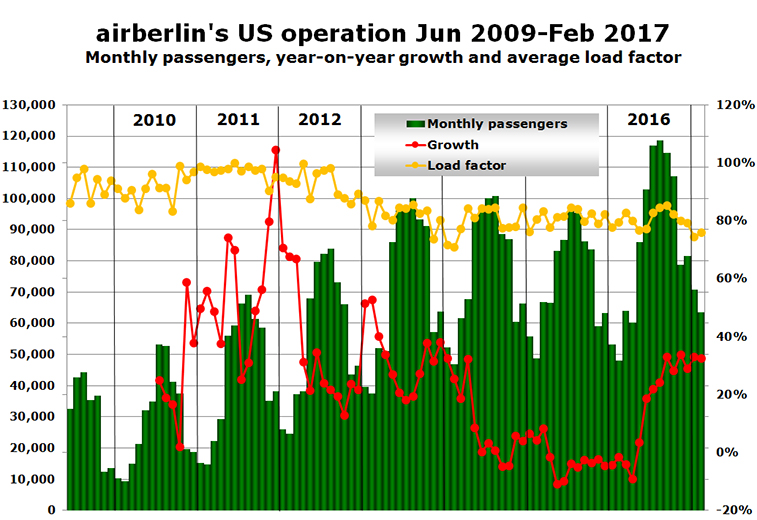 So while talks are ongoing with the likes of Lufthansa, easyJet, and even Ryanair having potential discussions to make a bid for the carrier, arguably to take over the vast capacity that will be acquired in Germany, no attempt has been made publicly to suggest what could happen to airberlin’s long-haul operation. Could Lufthansa take it on and shift the capacity to in-house LCC Eurowings? Or would it allow another carrier to snap up the opportunity of breaking into the transatlantic market? anna.aero is sure that Norwegian is certainly eyeing the potential gap of one million passengers that will be made available from the airline’s long-haul operations to the US from Tegel and Düsseldorf, with Germany still not being on its long-haul network to the US.

**Update** – since this article was published, airberlin has now closed reservation for flights between Berlin Tegel and San Francisco, plus Düsseldorf and Boston for the upcoming W17/18 season. Carrier has also reduced frequency on three other US routes from both German airports – link.