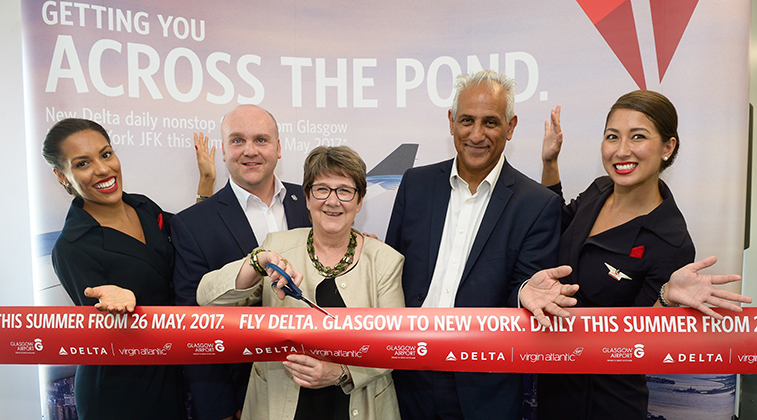 Back in May, Delta Air Lines introduced Glasgow to its network with a seasonal daily service from New York JFK. Seen among those at the launch are Steven Marshall, Head of Airline Marketing and Development at Glasgow Airport (second-left) and Frank Jahangir, Delta Air Lines’ VP Sales – Europe, Middle East and Africa (second-right). In May US airlines saw an increase in international passengers of 4.8% when compared to the same month of 2016, while overall for the first five months of this year US carriers have flown 43.15 million international passengers, up 3.3% on the same time last year.

The latest passenger data from the US DOT Bureau of Transportation Statistics (BTS) shows that for the first five months of 2017, international traffic flown by US carriers is growing faster than on domestic services, with the non-US market seeing traffic rise by 3.3% when compared to the same period of 2016. This compares with domestic traffic which climbed 2.6% respectively. As a whole, US airlines in 2016 carried nearly 104 million international passengers, up 2.9% on the level encountered in 2015. Looking at the domestic market in 2016, 719 million enplanements were recorded, a rise of 3.3% on the 696 million intra-US passengers flown last year. This is the first time in recent history that US domestic passengers have passed the 700 million passenger barrier. 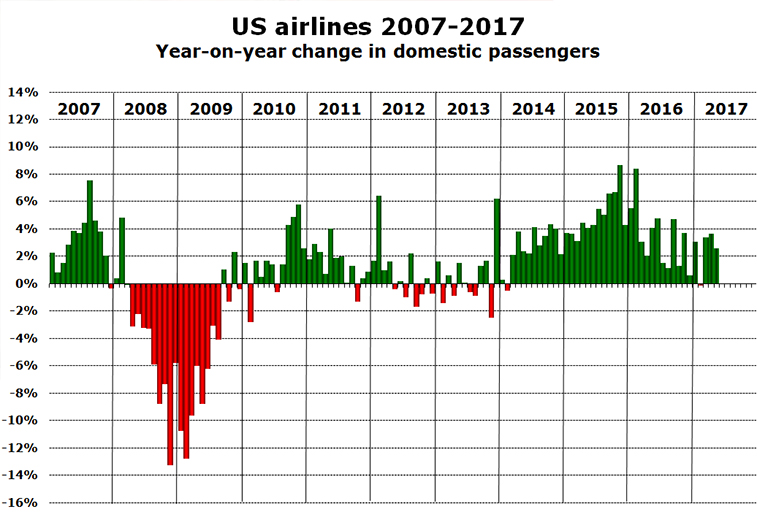 For the first five months of this year, February was the only one to see a drop in traffic, down 0.1%. However February last year saw an extra day due to it being a leap year. January, March, April and May all encountered growth of between 2.6% and 3.7% respectively.

American Airlines remains the leading carrier in the US domestic market, with it registering a 0.5% increase in capacity for S17 to over 126.5 million one-way seats. However, the battle for second has heated up during the past year, with Southwest Airlines, currently third, growing twice as fast as second placed Delta Air Lines, with the LCC now only being around 100,000 seats behind the SkyTeam member. 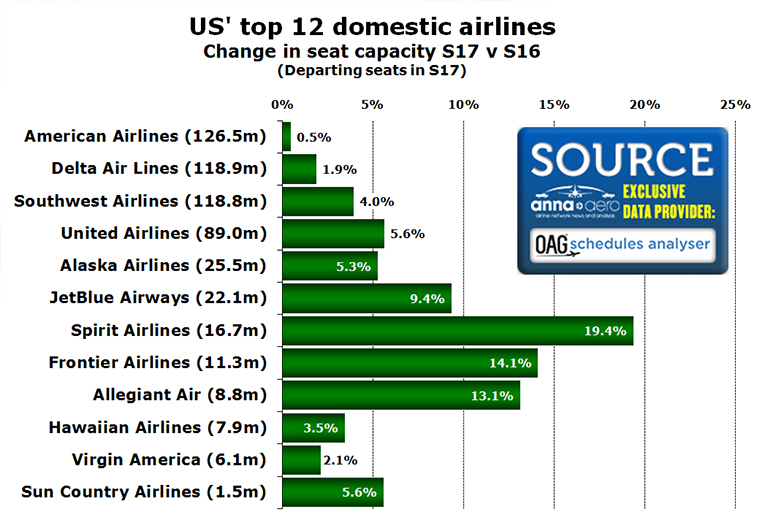 Despite the battle for second place, looking at the top 12 domestic airlines in the US it is clear that one type of business model is driving growth, and that is the ULCC. Spirit Airlines (increase in seat capacity in S17 of over 19%), Frontier Airlines (14%) and Allegiant Air (13%) are the three fastest-growing carriers in the domestic sector. With regards to the top 12 ranking of carriers, no changes have been made since S16.

International market lead by US carriers

US carriers, as already stated, are growing faster in the international market, with traffic up 3.3% for the first five months of 2017. The best month so far this year is April, with non-US passengers climbing by 9.8%. This is the first time that this sector has seen a monthly growth figure above 8.0% since October 2010, a month which saw traffic increase by close to 12%. 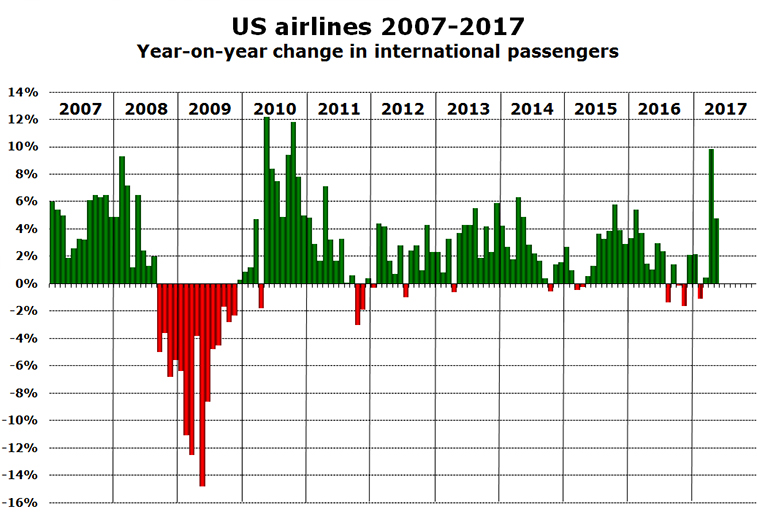 The last time that there was growth in every month of a complete year was back in 2007. Since then there has always been at least one month which showed a year-on-year traffic decline, with February this year (down 1.1%) confirming that 2017 will not break this trend.

The top seven international airline rankings in the US remain unchanged when compared to last summer, with those carriers all showing rises in international capacity in S17. The order only changes once we get to eighth position. Despite Virgin Atlantic Airways’ recent expansion from Manchester to the US, along with enhanced offerings from Glasgow to Orlando this summer, the carrier is showing a cut in capacity, with available seats down 2.7% when referring to OAG schedules. However, this could be as a result of the introduction of its newer aircraft, including 787s and A330s, replacing the older, higher-density 747-400s and A340-600s. As a result of its cuts, Southwest Airlines and WestJet have now overtaken the UK carrier in relation to international seats from the US. Along with Virgin Atlantic, Emirates’ well-publicised cuts have seen it reduce seat capacity to the US this summer by 4.0% to 1.39 million seats, with Air France overtaking the MEB3 member in the top rankings. 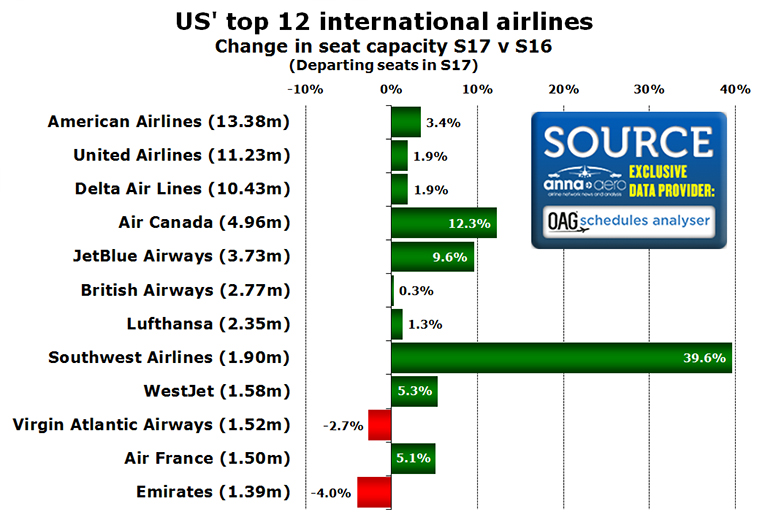 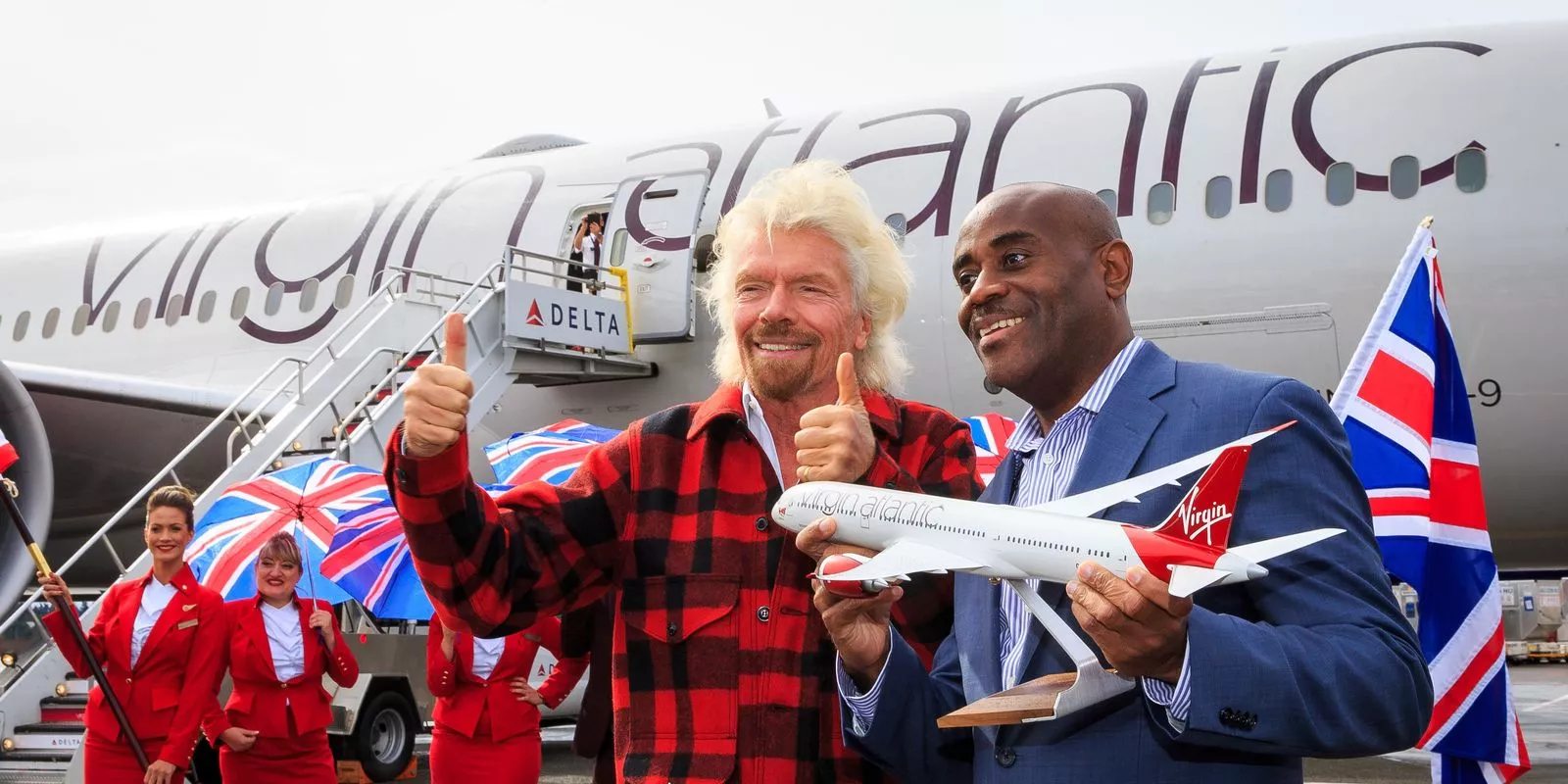 Virgin Atlantic Airways commenced flights to Seattle-Tacoma in March from London Heathrow, replacing Delta Air Lines on the route. Seen at the launch are the airline’s founder Sir Richard Branson and Lance Lyttle, MD Aviation – Port of Seattle. The UK long-haul carrier this summer is recording a cut in capacity to the US of 2.7%, with Southwest Airlines and WestJet now overtaking the airline in the nation’s top 12 international carrier rankings.