On 17 August, Vilnius Airport officially reopened its runway after a 35-day reconstruction project which included replacing the old pavement, reinforcing its foundation, installing new drainage and rainwater collection systems, plus a reconstruction of the lighting control system. Seen conducing the ribbon cutting to declare the project complete are: Donatas Voveris, CCO Lithuanian airports; Vladis Lejnieks, Chairman of the Board at A.C.B. (the company which did the reconstruction); Rokas Masiulis, Minister of Transport and Communications in Lithuania; Gediminas Almantas, CEO Lithuanian Airports; and Olaf Martens, Director of Vilnius Airport. “We are glad to announce we have successfully finished this unique project of national importance. Only because of the professionalism of specialists and their enormous efforts this project turned into reality. I am absolutely proud of the whole team of Lithuanian Airports – all of us were united and focused more than ever before. I believe this reconstruction became the biggest event in the whole Lithuanian aviation market,” stated Almantas. The first aircraft to touchdown on the new tarmac was an airBaltic flight from Riga which landed at 00:15 on 18 August. The 737-300 was greeted with a water arch salute, while passengers were welcomed with a red carpet, champagne and live music. On 22 August VietJetAir announced a new route between Ho Chi Minh City and Jakarta, the carrier’s first route into Indonesia. Seen celebrating the new route are Budi Karya Sumadi, Indonesian Minister of Transportation, who received a souvenir from Nguyen Thanh Hung, Vice Chairman of VietjetAir. The sector will be launched by the airline on 20 December and it will operate with a daily frequency. Currently, the airline boasts a fleet of 48 aircraft, including A320s and A321s, and operates over 350 flights per day on 67 routes. 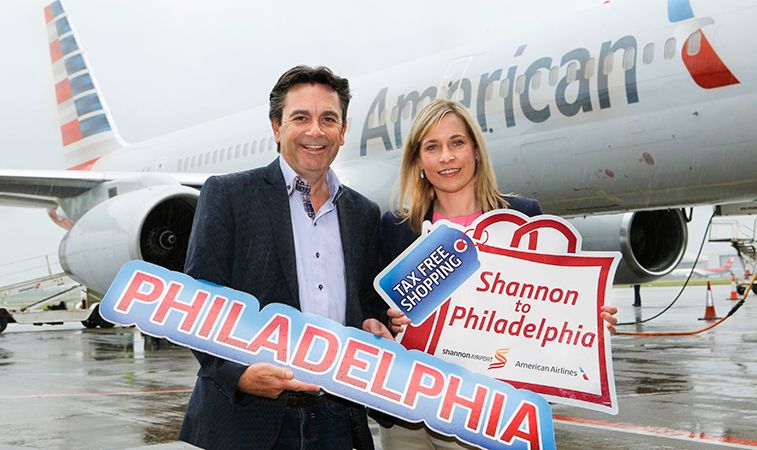 Shannon Airport welcomed the news this week that American Airlines will increase the period of operation on its seasonal from Philadelphia in S18. The world’s largest airline will increase capacity on the route by 18%. American will commence its 2018 service on 5 April, one month earlier than it did this year, with the service planned to run until early October. Over 38,000 passengers already use the daily service annually which operates on 757-200s. Seen at the airline’s route launch ceremony back on 8 May 2015 are Head of Aviation Development at Shannon Airport, Declan Power, and Fiona Noonan, Account Manger Ireland, American Airlines. Among this expansion, American will add new routes from Philadelphia in 2018 to Budapest, Prague and Zurich.