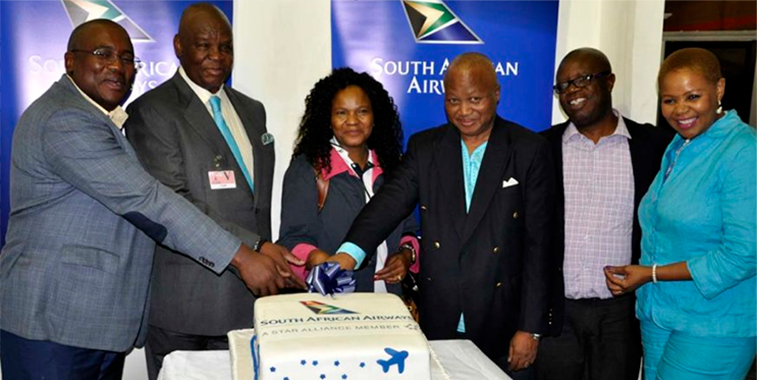 South African Airways (SAA) in FY2016 carried 6.92 million passengers according to the carrier’s annual report (FY2017 report not yet released), an increase of 3.3% when compared to its FY2015 result. These figures do not take into account operations flown by its affiliates SA Airlink and SA Express. Despite the rise in traffic, the national carrier cut capacity last year by 0.8%. Nonetheless, this seat cull allowed the airline to increase its average load factor in FY2016 by two percentage points from 72% to 74%.

Regardless of the increased traffic and load factor, the airline appears to be in very deep financial difficulties this year. According to various sources in South Africa, a cash-strapped SAA is due to get a R10 billion (€641.6 million) bailout through the sale of the government’s multi-billion rand stake in Telkom. A draft bill, which is due to be drawn-up by the nation’s Finance Minister Malusi Gigaba, would allow for the release of R7 billion (€449.1 million) to be transferred to the airline in tranches and for Gigaba to impose certain conditions on the agreement. A government guarantee of R2.2 billion (€141.2 million) was already transferred to SAA on 30 June this year.

Since 2012 SAA on its own has cut capacity year-on-year at an average rate of 1.1%, with 2017 currently showing a 0.1 reduction%. However schedules for this year could still be changed with even greater cuts expected given the airline’s current financial situation. Taking a look at SA Airlink and SA Express, which fly under the SAA brand and flight code but operate as separate airlines, the two daughter carriers are fortunately not producing similar results to the national carrier. SA Airlink seems to be the winner of the collective, with it forecasting an 11% increase in capacity this year, no doubt helped by the integration of the E190 and E170 into its fleet. SA Express on the other hand, like the parent company, is showing worse results, with it currently predicting an 11% reduction in annual seats for 2017, having recorded an average year-on-year decrease in capacity of 6.1% since 2012. As a group, the three airlines have recorded a 0.1% rise in capacity for 2017. 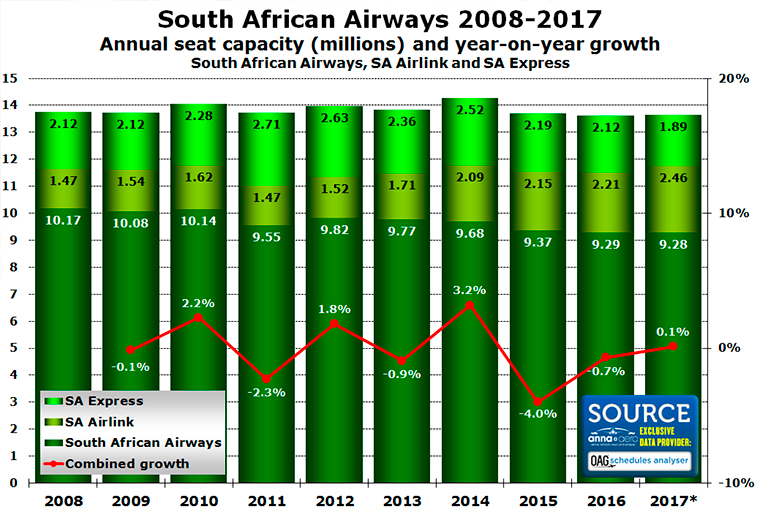 While SA Express has shown the greatest cut in capacity, in FY2016 it recorded its best annual average load factor since FY2010, with it growing from 66% to 74% during the six-year period according to its annual report. Nonetheless, while the load factor has increased by eight percentages points, the number of passengers flown has decreased by 5.5% from 1.39 million in FY2010 to 1.31 million in FY2016. During this time, SA Express’ passenger numbers peaked in FY2012, a year in which it carried 1.58 million passengers, 20% more than it flew in FY2016. Unfortunately anna.aero was unable to obtain traffic figures for SA Airlink.

While SAA seems to be falling at the moment, its in-house LCC Mango is continuing to thrive, with it in FY2016 passing three million passengers for the first time. This represents a growth in traffic for Mango of 21% when compared to the 2.48 million people that flew with the carrier the year before. In FY2010 the LCC carried 1.30 million passengers, meaning that the airline has increased its traffic throughput by 130% in the past six years, while SAA’s has only risen 2.8% in that time.

The last time that anna.aero looked at South African Airways, its three largest airports – Johannesburg, Cape Town and Durban – had all encountered capacity cuts, a trend that appears to still be the case. In S15 the airports achieved an average decline in seat capacity of 7.2% when compared with S14. In S17, the three airports combined for SAA are forecasting a 1.3% cut when viewed against S16 figures. So while capacity cuts are still being made at Its top three airports, the reductions are not as bad as those recorded in previous years. 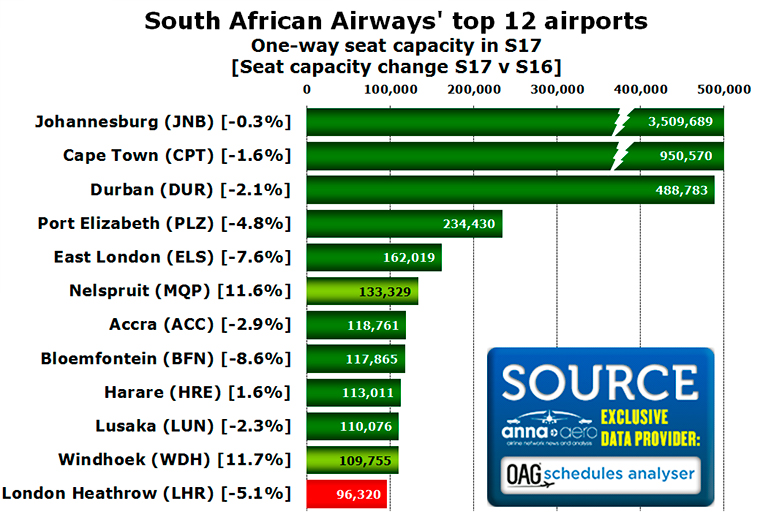 While the main trend appears to be cutbacks, two airports in the carrier’s top 12 are promoting double-digit growth (highlighted in light green), with Nelspruit (growth of nearly 12%) and Windhoek (12%) going against the norm. These rises are due to increased operations to both airports by SA Airlink. Only one airport in SAA’s top 12 – London Heathrow (highlighted in red) – is outside of Africa, with it showing a 5.1% drop in seat capacity in S17.

Over half of country markets see cuts

Of the 31 country markets which SAA is serving this summer, including the planned new service to Saint Helena from 21 October from Johannesburg and Windhoek (which will be flown by SA Airlink), 17 of them (55% of markets) are showing capacity reductions when compared to S16. Of those countries in the top 12, six (all highlighted in light green) have encountered capacity cuts, with five – Germany, US, Ghana, UK and Brazil – only being served with wide-body aircraft according to OAG schedules. While South Africa, coincidentally the carrier’s top market, is recording the smallest percentage decrease of those nations in the top 12 to see a capacity reduction, in terms of its net figures it has seen the greatest decline, with the number of one-way seats falling by over 25,800 this summer. 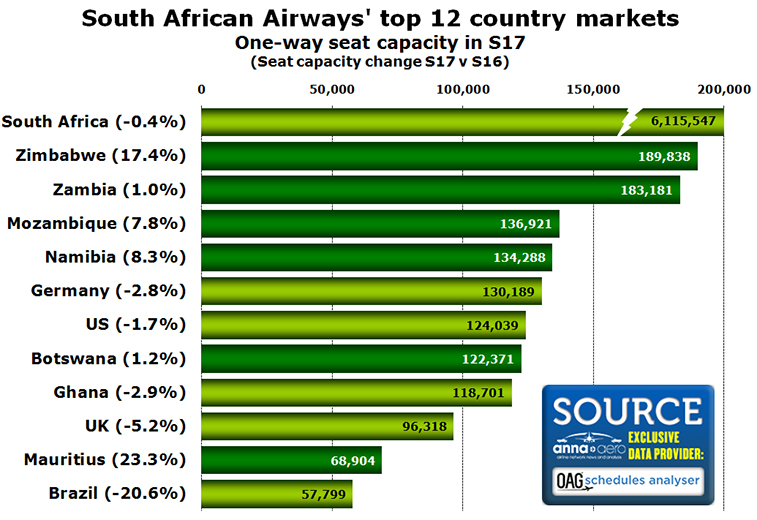 While SAA serves Germany, US, UK and Brazil, outside of Africa, it also flies to Australia (13th largest country market) and Hong Kong (16th) direct from South Africa. Both of these markets have also seen a reduced operation this summer when compared to last year, with Australia seeing seat availability reduced by 2.8% and Hong Kong by 4.3%.

As a result of the airline’s cutbacks, in S17 it is recording a reduction in one-way ASKs (Available Seat Kilometres), which takes into account sector length frequency and aircraft size, of 3.1% to just under 17.95 billion (includes SA Airlink and SA Express operations). This compares to 18.52 billion one-way ASKs in S16. Of the ASKs flown in S17, just under 68% of them are generated from wide-body operations. Currently this summer, SAA has A330-200s, A330-300s, A340-300s and A340-600s in its fleet when analysing OAG schedules, with wide-body ASKs reducing by 3.6% in S17 when compared to S16. While wide-body ASKs are down, the star performer for the carrier is its regional jet operations (operated by SA Airlink and SA Express), with these aircraft showing an increase in ASKs of 3.8% to 1.47 billion this summer, with regional jets now accounting for 8.2% of all ASKs generated from SA flight code-operated flights. 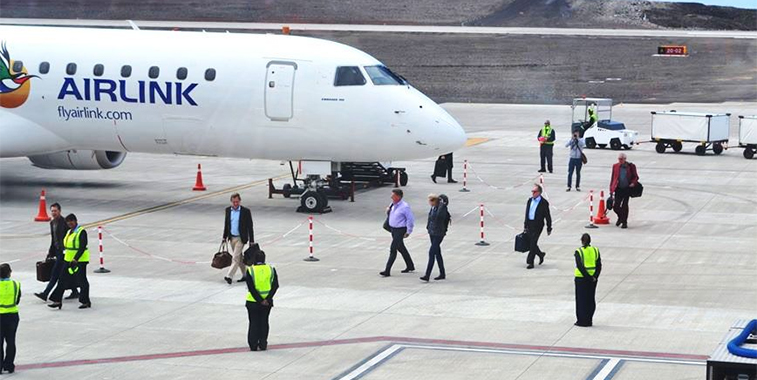 SA Airlink, which is a separate airline to South African Airways (SAA), although it operates using the same flight code, recently carried out a proving flight to Saint Helena. This is the only new country market for SAA this summer, with it commencing a regular scheduled service to the island on 21 October from Johannesburg and Windhoek. Flights will be operated on SA Airlink E190s. Regional jets appear to the leading area for growth for SAA, with regional jet one-way ASKs for the carrier up 3.8% this summer to 1.47 billion.