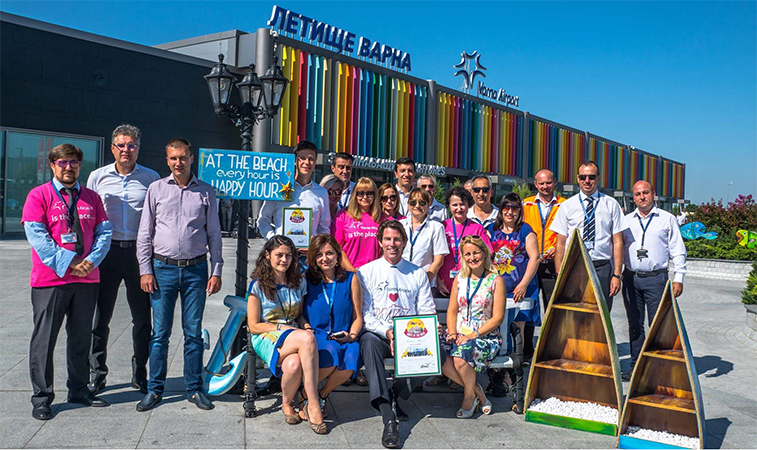 A few weeks ago Varna Airport celebrated winning the anna.aero Route of the Week award for the opening of Wizz Air’s base and its six new routes. During H1 2017, the airport’s passenger traffic has increased by 15% to over half a million passengers. Later this year Ryanair will become the newest carrier at the airport with the launch of flights from Brussels Charleroi.

With a metro population of around 474,000 people, Varna Airport serves Bulgaria’s third largest city (after Sofia and Plovdiv), but also the largest city and resort on the nation’s Black Sea coast. Due to its geographical location Varna’s local economy is driven mainly by tourism, with 61% of net revenue for the city being generated in trade and tourism. According to the Ministry of Tourism in Bulgaria, more than one million tourists chose Varna as their holiday location last summer. Revenues from their collective vacations during the first seven months of 2016 exceeded BGN 235 million (€120 million), which is a 23% increase when compared to the same period in 2015. During the first seven months of 2016, Varna welcomed 901,455 passengers, up 22% from the 737,488 which it handled during the same seven months of 2015. This result therefore shows an approximate correlation between the increase in passengers at the airport and the revenue generated from overnight stays in the region.

Last year Varna handled 1.69 million passengers, up by around 21% when compared to 2015, a year in which 1.40 million flew through the airport. When reviewing the past decade with regards to traffic growth, 2016 was indeed the best year. Last year Varna was the fourth-fastest growing airport in Europe (in the 1-2 million passenger category) according to anna.aero’s European Airport Traffic Trends Database, with only Doncaster Sheffield (up 46%), Cluj-Napoca (27%) and Timisoara (26%) seeing better results. 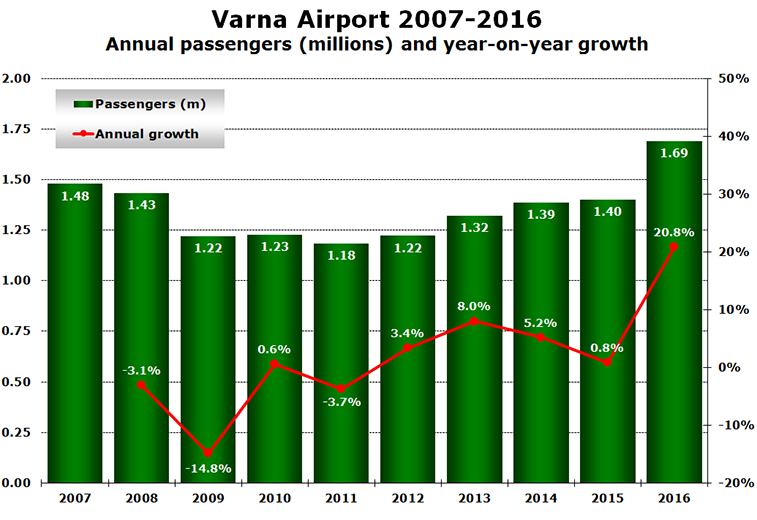 Looking back at traffic statistics for Varna before 2007, it has only experienced two years when passenger numbers were above 1.5 million (2005 and 2006). This means that 2016 was a record-breaking year for Varna in relation to passenger throughput. In the past decade Varna has witnessed three years in which passenger numbers declined, with traffic falling 3.1% in 2008, 15% in 2009 and 3.7% in 2011.

For the first six months of this year, Varna welcomed 574,939 passengers, up 15% when compared to the 499,737 it processed during the same period of 2016. The best month for growth during H1 2017 is April, with passenger numbers increasing by an impressive 56%. In July Varna delivered a 10% increase in passengers, with it handling 443,523 people. This means so far this year (January-July) the airport has handled just under 1.02 million passengers. 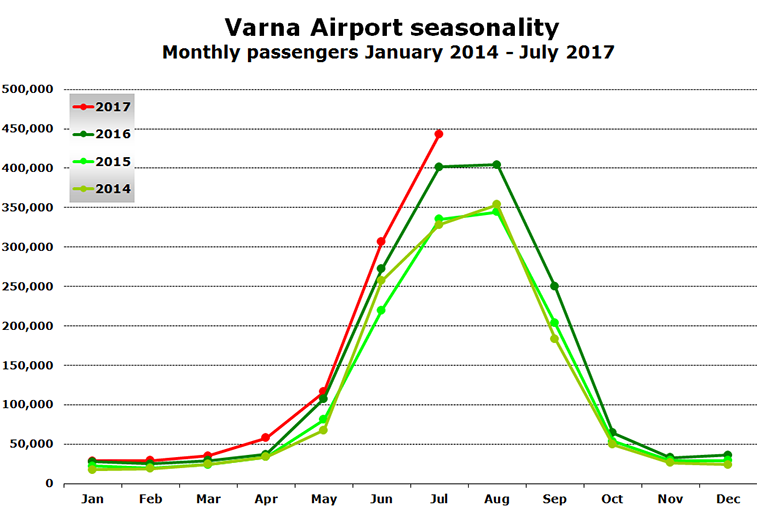 If we take Varna’s monthly passenger statistics for 2016 and place them in anna.aero’s Seasonal Variation in Demand calculator (SVID), it scores 123.74, which anna.aero refers to as a  “Why bother opening in the off-peak?” rating. However, this score is an improvement on the 126.58 which it generated from its 2015 statistics. In 2017 it can be assumed that this score will be further reduced due to the opening of Wizz Air’s new base at the airport, which saw the introduction of six new year-round services to Dortmund, Eindhoven, Larnaca, Memmingen, Milan Bergamo and Tel Aviv, joining the airline’s existing services to Sofia and London Luton.

A few weeks ago Wizz Air opened its 28th base at Varna, stationing one A320 at the Black Sea airport. As a result of the carrier’s expansion from Varna, it is operating 252% more seats this summer than it did in S16. It also means that the ULCC has overtaken Bulgaria Air to become Varna’s biggest airline. Along with Wizz Air, a further seven airlines in Varna’s top 12 are reporting growth this summer, with four (highlighted in light green) indicating seat capacity reductions when compared to last year’s summer season. 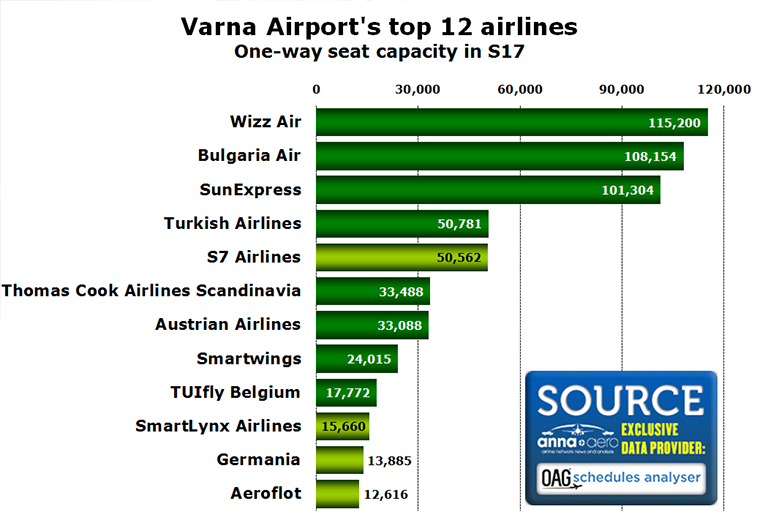 The largest new airline at Varna this year is easyJet (14th largest). The carrier inaugurated services to the airport on 6 June in the form of a seasonal three times weekly service from London Gatwick. This route was then followed by a twice-weekly rotation from Berlin Schönefeld which began on 28 June. Outside of the top 12, along with the arrival of easyJet, one noticeable difference when compared to S16 is the growth from Europe’s third largest LCC – Norwegian – with it expanding its presence at Varna by an impressive 179% when compared to last summer. One factor contributing to this increase is the airline beginning flights from Helsinki on 1 July. The carrier also operates to Varna from Oslo Gardermoen  and Copenhagen. Overall when we combine all airline operations together, seat capacity to Varna in S17 is up 29% when compared to S16.

Getting ready to welcome Ryanair

The expansion of Wizz Air and Norwegian, plus the arrival of easyJet, must have been factors for Ryanair’s decision to introduce itself to Varna’s airline line-up. From 29 October it will start a twice-weekly (Thursdays and Sundays) service to Varna from Brussels Charleroi. What is interesting about this route is that Ryanair is launching services during Varna’s off-peak season, meaning the Irish carrier will be the only airline this winter operating between Varna and Belgium. This summer the market is already served by TUIfly Belgium and Thomas Cook Airlines Belgium.

Looking ahead to S18, two routes that will be launching to Varna will be flown by Thomas Cook Airlines, with the UK leisure carrier planning new services from Birmingham and Manchester. Both of these routes are currently not being flown in S17 when referring to OAG schedules. Along with these UK additions, Germania will begin flights from Nuremberg starting on 4 July. 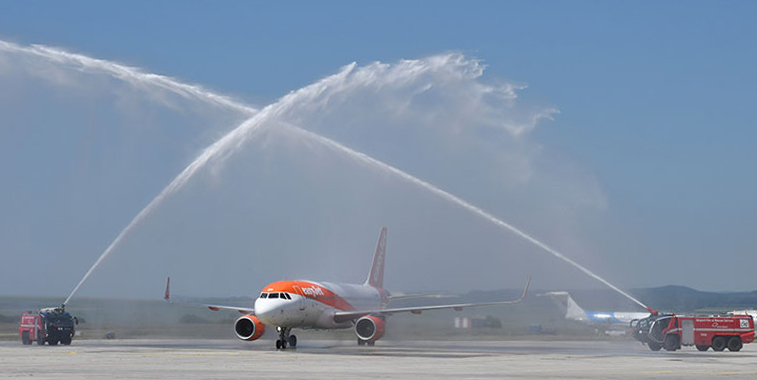 easyJet is the newest airline to serve Varna Airport, with it now linking the Bulgarian city with London Gatwick and Berlin Schönefeld. The arrival of the LCC has helped contribute to towards the 29% increase in seat capacity being seen at Varna this summer. Highlights coming up for the airport include the arrival of Ryanair in October with flights from Brussels Charleroi, while for S18 new routes confirmed include Birmingham and Manchester with Thomas Cook Airlines.