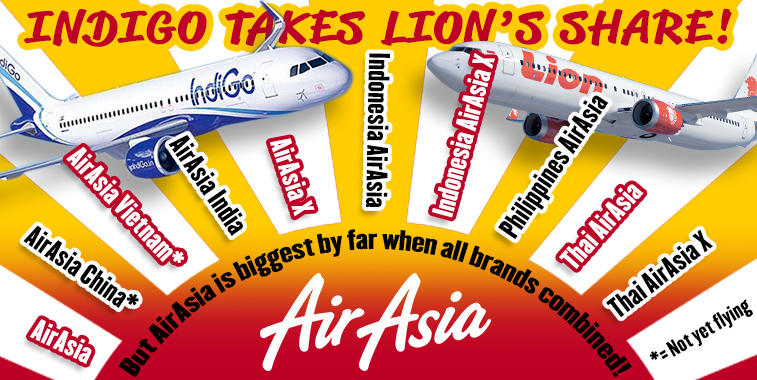 IndiGo is now Asia’s biggest individual low-cost carrier with 35 million one-way seats in S17 according to OAG schedules, leaping past Indonesia’s Lion Air by five million departing seats. But if you were to treat all the various AirAsia Group airlines as one unit, it would have a 10 million one-way seat advantage over its Indian rival this summer.

The LCC sector has boomed in Asia during the past decade, with the region’s one-way seat availability in this part of the market increasing by 459% from 70 million in 2007 to 455 million this year. The result of this phenomenal growth now means that nearly 26% of all seats flown in Asia this year will be operated by an Asian LCC. To gain further knowledge on just how this sector has boomed during the past decade, anna.aero has decided to see just how the market has developed with regards to seat availability, sector (short-haul/long-haul) and airline growth.

In 2017 annual one-way seats offered on long-haul services (routes over 4,500 kilometres are determined to be long-haul sectors by anna.aero) by Asian LCCs are estimated to increase by 17% to over 5.87 million. This compares to the 13% growth that will be seen in the short-haul sector. Overall since 2007, short-haul growth has increased at an average year-on-year rate of 21%, whereas the long-haul market has risen by 26%. What is perhaps even more impressive is that both long-haul and short-haul markets have seen double-digit growth in every year in that period. It should be noted that since 2013, Asian LCCs have seen greater growth in seat capacity on long-haul sectors than short-haul. 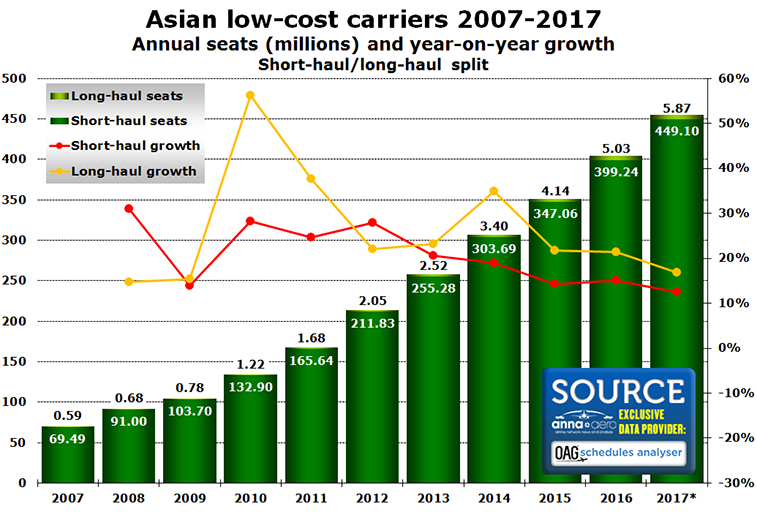 As already stated, since 2007 Asian LCC seat capacity has increased by 459% from 70 million annual seats to just under 455 million, with double-digit growth being recorded each year since then. However the growth has slowed from 31% in 2008 to under 13% in 2017. But if we look at the growth in relation to net increase of seats, in 2017 there will be 50.7 million more seats operated by Asian LCCs when compared to 2016, while in 2008 there was 21.6 million more seats flown than in 2007. So despite the slowing growth, the net amount of seats added each year is increasing.

In 2007, Asian LCCs accounted for 8.1% of annual seats in Asia. This is a market share which has increased to nearly 26% in 2017. During the past decade, Asian LCCs have increased their combined market share of all Asian seats on average by 1.8% per annum. 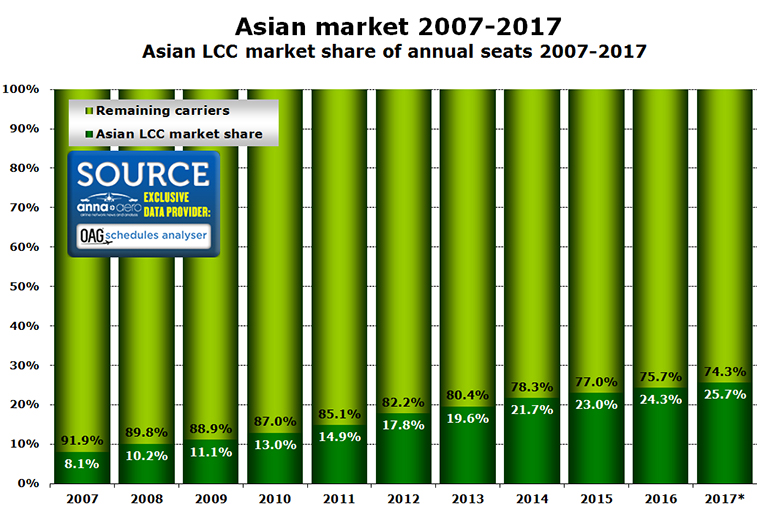 During the past 10 years, the number of available departing seats in Asia has risen from 867 million in 2007 to 1.77 billion this year. While Asian LCC’s have seen an average year-on-year increase of 21%, overall when we look at all carriers operating in Asia which have submitted data to OAG, they have increased on average year-on-year by 7.4%, meaning that Asian LCCs are growing around three times faster than the norm for the region.

When analysing individual country markets, India is Asia’s leading nation when it comes to LCC capacity, with it seeing close to 62 million departing low-cost seats in S17, an increase of around 17% when compared to S16. Of the top 12 nations in Asia with regards to low-cost seats, all of them have reported growth in the market, with Singapore reporting the smallest increase of 5.3% to nudge it past seven million departing Asian LCC seats. The best growth however has come from South Korea, where low-cost seats have increased by over 28% since S16. 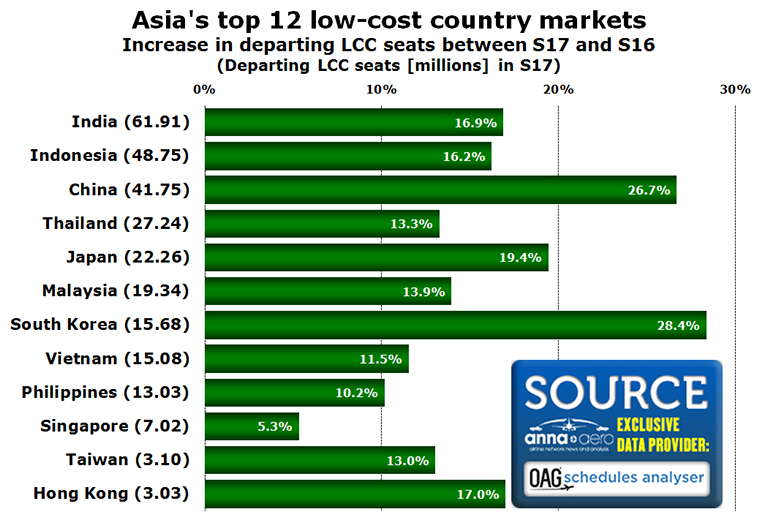 In total the top 12 nations in Asia account for 97% of all seats operated by Asian LCCs, the same market share that the 12 had in S16. When referring to OAG schedules, there are 30 nations in Asia this summer with operations from an Asian LCC. This is the same amount of countries that had service in S16, with no nations being added or dropped. One nation outside of the top 12 which is recording a significant increase in seats from Asian LCCs is Cambodia (14th largest nation), with it seeing a 45% increase in capacity when compared to last summer’s figure of 743,000 seats. With regards to Asian LCC long-haul operations, the leading destination is Australia, with it witnessing 1.16 million one-way seats in this sector this summer, up 4.3% when compared to S16.

IndiGo is the leading LCC in Asia, with it offering 35.11 million departing seats in S17 according to OAG schedules, an increase of over 14% when compared to what it offered in S16. As a result of this growth, IndiGo has taken the number one Asian LCC position from Lion Air, which itself grew capacity by 8.8% this summer. 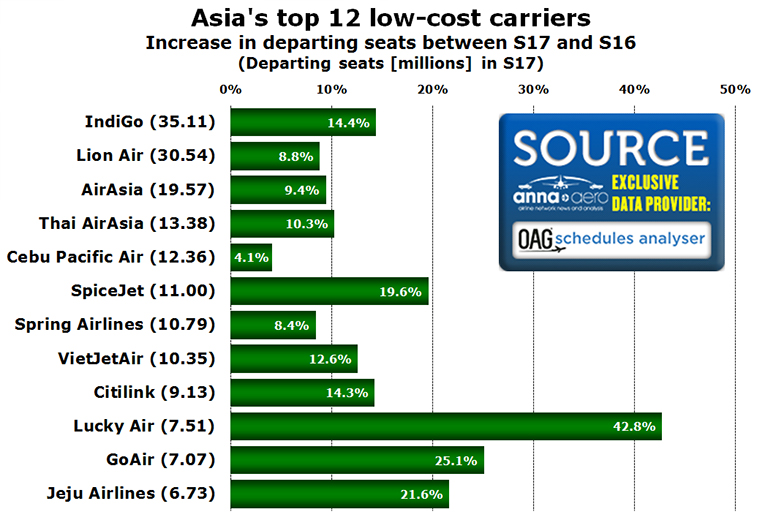 All of Asia’s top LCCs have produced capacity increases during the past year, with the most impressive growth coming from U-FLY Alliance member Lucky Air, with it heralding a 43% increase in seat capacity in S17. With regards to Asian long-haul LCCs, Asia’s leading airline in this sector is AirAsia X, with it operating 43% of long-haul Asian LCC seats in S17. If we include Thai AirAsia X and Indonesia AirAsia X operations as well, the trio combined control 56% of all seats flown by Asian low-cost long-haul airlines.

More to come from Asian LCCs

In recent years, Asian LCCs have ventured into new markets. AirAsia X recently commenced its first flights to the US in the form of a connection to Honolulu, while Scoot has now inaugurated services to Athens from Singapore, its first European destination. The carrier has stated that it will grow its presence in Europe over the next few years, along with more destinations in Asia now that it has merged with Tigerair, bringing its A320s and A319s into the combined fleet. What seems to be the main focus of Asian LCC growth is long-haul markets. It was recently been suggested that by Q4 2017, Lion Air will vastly enhance its long-haul operations when it starts utilising its 737 MAXs to their full potential, with the airline having 300+ of the aircraft type on order. Another carrier to keep a close eye on is AirAsia X, which currently has 76 wide-body units on order, made-up of A330-900neos and A350s. 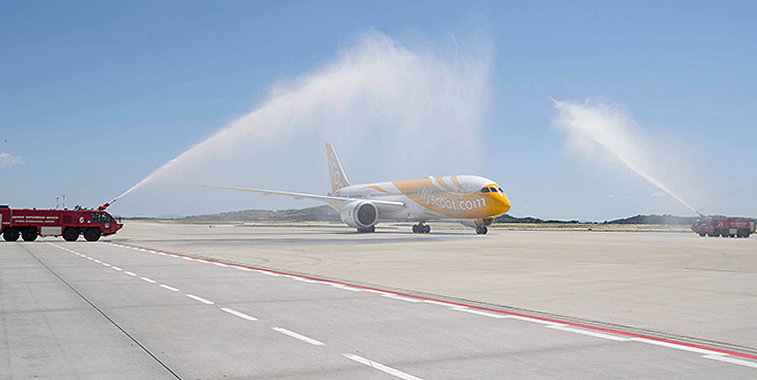 Asian LCC Scoot recently began its first service to Europe, with Athens joining the carrier’s network. In 2017 long-haul one-way seats operated by Asian LCCs will increase by 17% to 5.87 million. Since 2007, the Asian LCCs have recorded an average year-on-year increase in long-haul seats of 26%, with Australia being the top country market.

Asia’s biggest event dedicated to passenger experience and business performance is arriving in Singapore this November, with the official support of Changi Airport Group, which is a Headline Partner. There’s plenty on offer completely free of charge, including a major expo and access to two premium conferences featuring air transport and travel leaders from across Asia and beyond.

Visit www.futuretravelexperience.com/fteasia/ to secure your pass while it’s still free of charge. 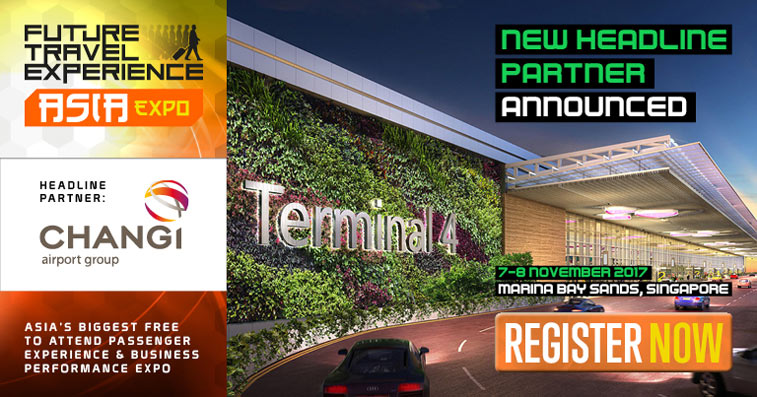