Gold Coast-Seoul is “Skyscanner Unserved Route of the Week” with 100,000 searches; Will Asiana Airlines assess the opportunity?? 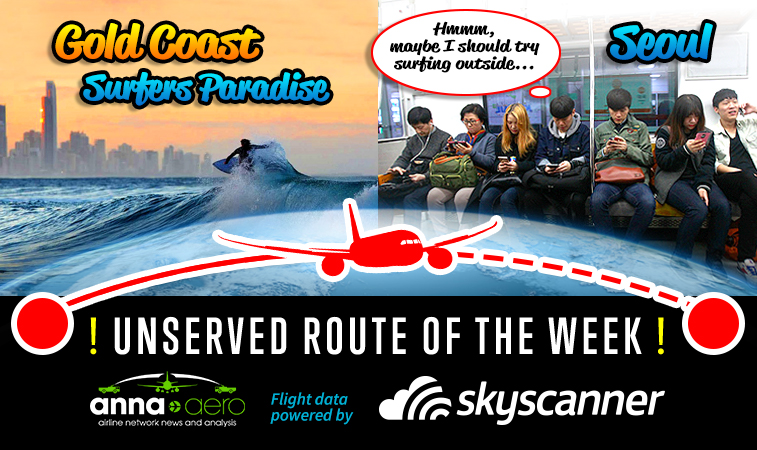 Korea is the most online country in the world – presumably mainly involving browsing Skyscanner’s website researching their next overseas trip to Australia’s gorgeous Gold Coast. With around 100,000 travellers looking for flights in the last year from Seoul to the tourism hot-spot, surely Asiana Airlines or Jetstar Airways should both be considering the sector as its next new route between the continents.

With nearly 100,000 searches in the last 12 months, a potential city pair from Gold Coast to Seoul has been identified as this week’s “Skyscanner-anna.aero Unserved Route of Week” – a powerful analysis based on aspirational data captured from the Skyscanner.net flight comparison site used by +60 million unique visitors per month. “The demand is definitely there for a direct route to the Gold Coast from Incheon,” confirms Michael Curtis, Manager International Business Development, Gold Coast Airport. “The diversity of markets wanting the Gold Coast include high-end leisure seekers, honeymooners, students attending our universities and colleges, plus working holiday visitors who are seeking out competitive fares.” 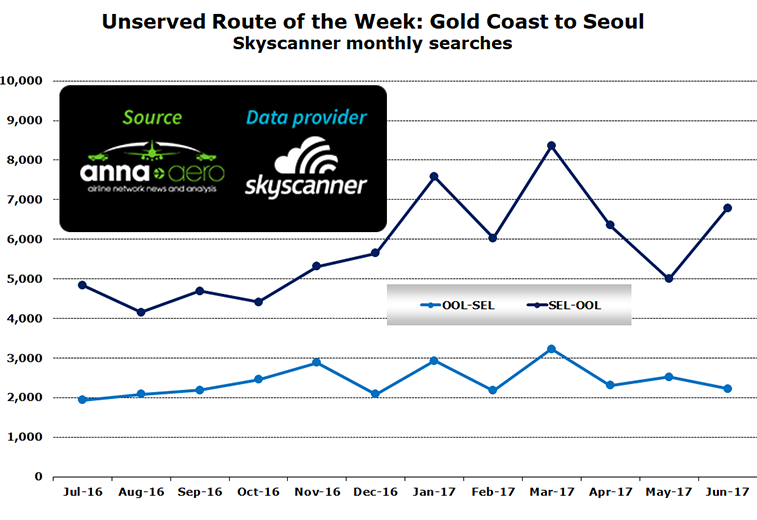 anna.aero advises Asiana or Jetstar to jump onto this link

Skyscanner demand on this week’s unserved route shows a significant bias towards the Seoul end of the city pair, with a 70/30 split, so on this basis we looked at potential carriers at the Korean origin first. A potential service from the city’s Gimpo Airport has not been included in this analysis, as it currently offers just five scheduled non-stop international routes, all to regional points – namely Tokyo Haneda, Osaka Kansai, Shanghai Hongqiao, Beijing and Taipei Sung Shan. Across town at Incheon Airport, the largest of its 68 serving airlines is Korean Air, with capital city’s main international facility also being the SkyTeam carrier’s biggest base (nearly three times larger than its Gimpo operation in terms of weekly seats). Korean Air commands 28% of capacity at the facility according to OAG data for the week commencing 29 August. The airline currently offers 97 destinations from Incheon, including two existing non-stop services to Australia. A daily service is flown to Sydney, while Brisbane benefits from a four times weekly operation. Perhaps given the close geographical proximity to Korean Air’s existing Australian services – Sydney is around 680 kilometres south of Gold Coast, while Brisbane is only 95 kilometres north-west – maybe it will consider other cities in the country first as its next port of call.

The same might not be said of Incheon’s second largest carrier Asiana Airlines (19% share of weekly capacity), and with 65 direct destinations, the airport is also its largest base (just over twice as big as its Gimpo operation). Of these 65 network points it too serves Sydney with a daily flight, but it is yet to add a second city to its Australian route portfolio. Having no existing Brisbane service to compete against, a move onto this airport pair may well be a less risky option for Asiana than for its bitter domestic rival. As a result of this Skyscanner data now being made public, Gold Coast could be the next long-haul route implemented since the Star Alliance carrier added a seasonal twice-weekly scheduled charter operation to Venice Marco Polo in June this year. This type of scheduled charter route could be exactly the right kind of service for the Gold Coast-Seoul sector too. 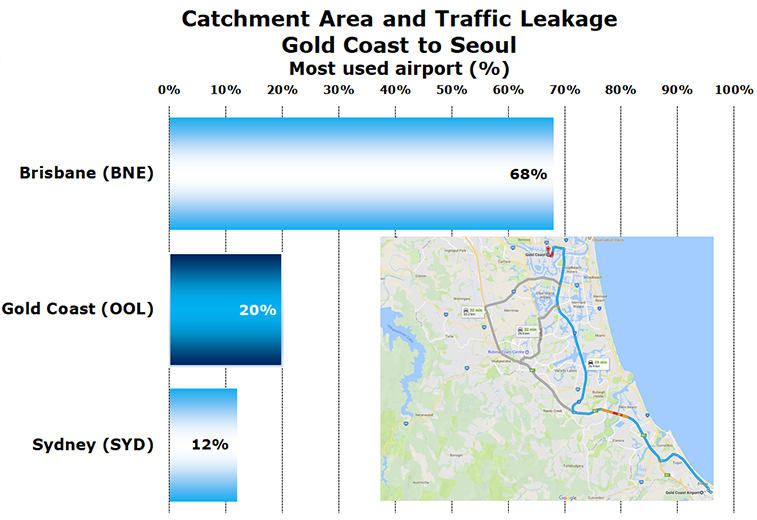 Faical Allou Skyscanner’s Business Development Manager says: “Gold Coast serves 20% of the traffic from the catchment (50 km around the airport) going to Seoul. With better service, such as a non-stop operation, the traffic could grow by a huge 405%.”

Contemplating the Gold Coast end of the route, the airport’s largest carrier (43% share) is Jetstar Airways, which flies to 12 destinations this summer, including five international non-stop sectors – Auckland (daily), Tokyo Narita (six times weekly), Queenstown, Christchurch and Wellington (all three times weekly). With operations to Japan already being flown from the airport, at least the LCC has the network strategy mentality to consider Asian routes. Indeed, Jetstar recently announced it will add a twice-weekly service from Melbourne to Zhengzhou in China on 9 December, so clearly expansion to new points on the continent is on the airline’s agenda. That said, the airline does not currently fly to any city in South Korea, so it would take a very compelling business case for Jetstar to consider a foray into this new market, but the same was probably said about starting flights to Zhengzhou – also a new city in a new country market.

When looking at the previous year of search data, the busiest month for potential traffic flows (for both directions on the route combined) is March 2017, with over 11,500 searches, more than 5,000 higher than the lowest monthly figure, which was recorded in August 2016 (6,200 searches). The seasonality profile of this search data is less extreme than the last Unserved Route of the Week (Eindhoven to Berlin) with the low-month traffic representing 54% of the highest month. According to OAG Traffic Analyser, because there is no direct service, the top three connecting options chosen by those passengers who did book travel between Gold Goast and Seoul in the last 12 months indicates that the majority of connecting travellers used Sydney (54%), Hong Kong (18%) and Singapore (10%). Overall, 10 different airports were used by transit and transfer passengers looking to get between the two cities. “We are witnessing the Korean market grow on the Gold Coast with most passengers travelling via third country airlines to reach us,” adds Curtis.

Indeed, an O&D that is not served by a non-stop flight will typically display a low purchase rate and low traffic. In this instance Skyscanner’s Travel Insight indicates a monthly average of 9.2% for the Gold Coast to Seoul route (see graph below). Therefore, if there was an Gold Coast to Seoul route, and if bookings performed in line with the “Skyscanner market average” for direct services at both airports (11%), the airline operating this route could immediately expect an improved purchase rate of 18%, without any increased marketing spend. However, with nearly 100,000 annual searches in the past year, a two or three times weekly service should be immediately viable for the airline selecting to start this potential city pair. “The opportunity exists for a new entrant to meet the demand in two-way traffic between Gold Coast and Seoul,” concludes Curtis. 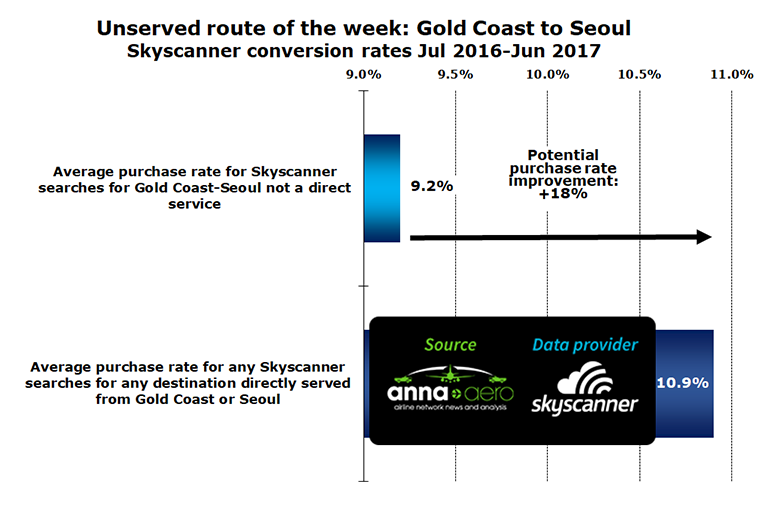