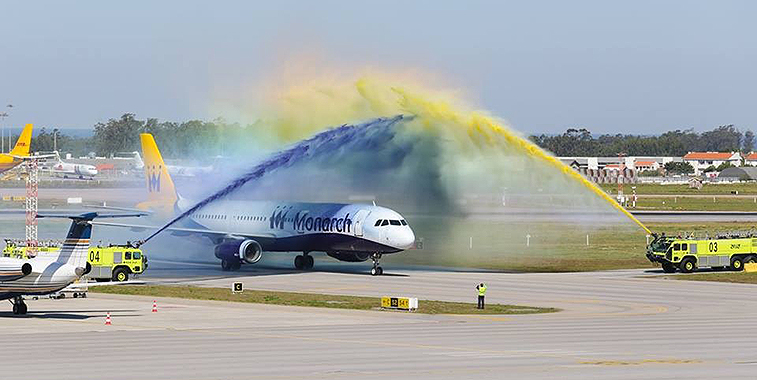 Monarch Airlines launched services to Porto earlier this summer with flights from Birmingham, London Luton and Manchester. During Q1 2017, Portugal’s airports averaged a monthly increase in traffic of over 20%, making it the fastest-growing nation in Europe for airline traffic during that period.

With most of Europe’s airports having now revealed their traffic statistics for the first half of 2017, anna.aero is this week looking to see which countries have had a good start to the year and which have been struggling. Our analysis shows the monthly change in passenger numbers going back to the beginning of 2013 for our first basket of 10 countries. This includes the EU’s five biggest aviation markets (France, Germany, Italy, Spain and the UK), the four Nordic countries and Ireland. 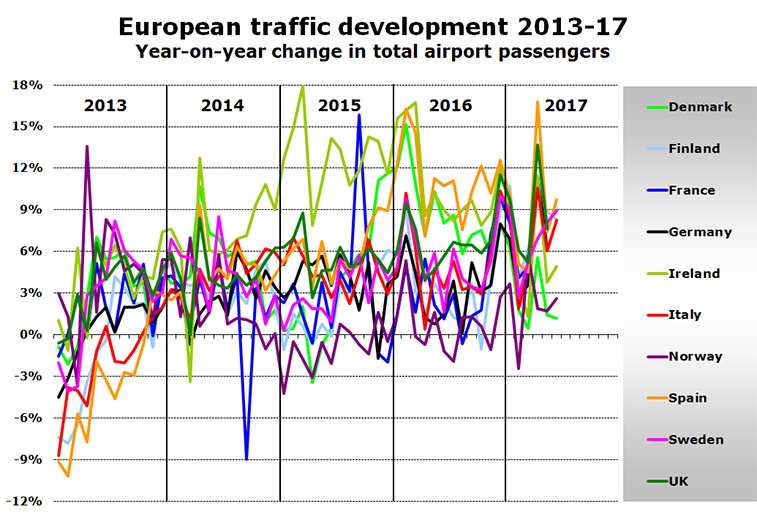 Only one of these 10 countries, Norway, has not reported year-on-year growth in every month so far this year. Despite the Scandinavian country seeing traffic rising in five of the six months where data is available, passenger numbers slipped 2.4% in February, however last year there was an extra day due to 2016 being a leap year. Overall, all countries listed in the graph above have achieved positive average monthly growth for Q1 2017, with the best of the bunch being Finland and the UK, with both during the first three months of this year seeing an average monthly increase of 7.0%. Following both northern European counties is Spain, with it encountering an average monthly increase in Q1 of 6.5%.

Looking further ahead than Q1, Denmark, Finland, Ireland, Italy, Norway, Spain and Sweden have complete H1 2017 traffic results. Of these seven nations, the best for growth during the first half of this year is Spain, with it delivering an average monthly increase in passengers of 8.9% for 2017 so far. Norway and Denmark saw the smallest inclines, with Norway’s passenger numbers growing on average by 2.2% a month during H1, with Denmark recording a mean monthly growth figure of 2.8%.

Portugal’s the star of the show

anna.aero’s other basket of 10 nations includes a mix of large (Russia and Turkey) and small (Croatia) country markets. Here, year-on-year monthly traffic data goes back to the beginning of 2014. Note that whereas the axis on the first graph went from minus 12% to plus 18%, on this graph the range is much wider, from minus 30% to plus 35%. 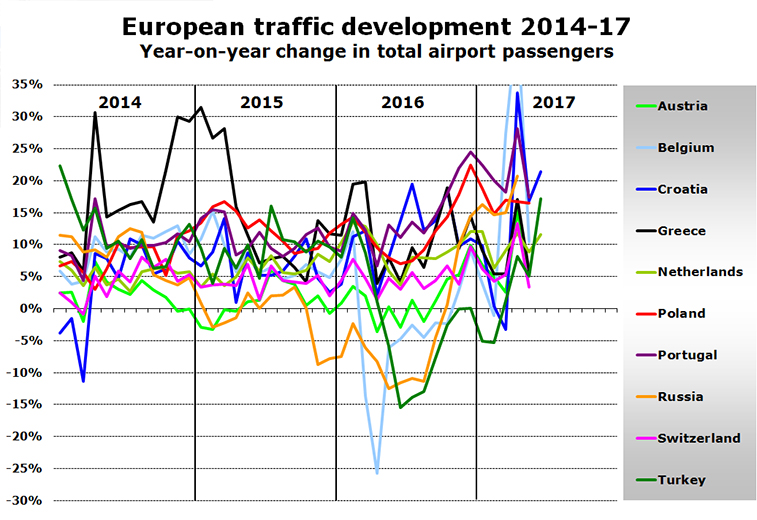 During Q1 2017, one nation in the second batch of countries analysed did see an average monthly decline, with numbers to and from Turkey decreasing by 3.1% per month. However Q2 is looking a lot more fruitful for Turkey, with the nation seeing a 17% rise in passenger numbers during June.

Like Turkey, two other nations in the second batch of countries have complete data for H1 2017, with Croatia and Netherlands posting statistics. Of these three, the best performing nation is Croatia, with it providing an average monthly increase in traffic for H1 of over 13%. This compares to the 8.5% monthly average it recorded in H1 2016. The Netherlands is posting an average monthly increase of 10%, up from the 9.4% it achieved in the first six months of 2016, while Turkey posted a mean increase of 3.6%, doubling its result from the 1.8% it garnered in H1 last year. 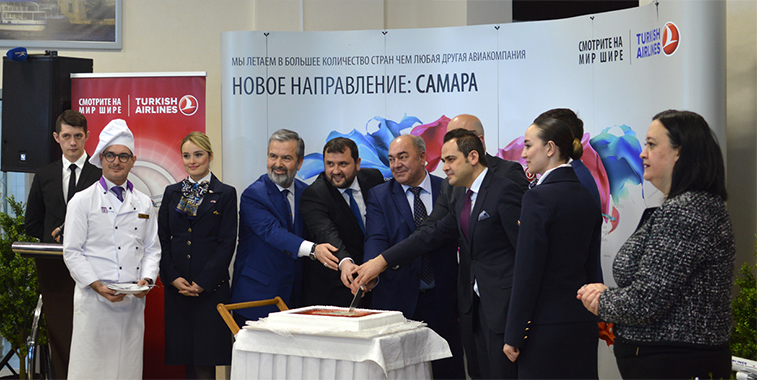 Turkish Airlines launched flights from Istanbul Ataturk to Samara on 11 April, the airline’s tenth destination in Russia. During Q1 2017 Turkey recorded an average monthly decrease in traffic of 3.1%. However due to a solid performance in June, with passenger numbers increasing by 17% that month, for H1 the nation is posting an average monthly increase of 3.6%. Russia in Q1 saw passenger traffic climb on average by 15%, making it the third fastest-growing nation in Europe during that period behind Portugal (20%) and Poland (17%).