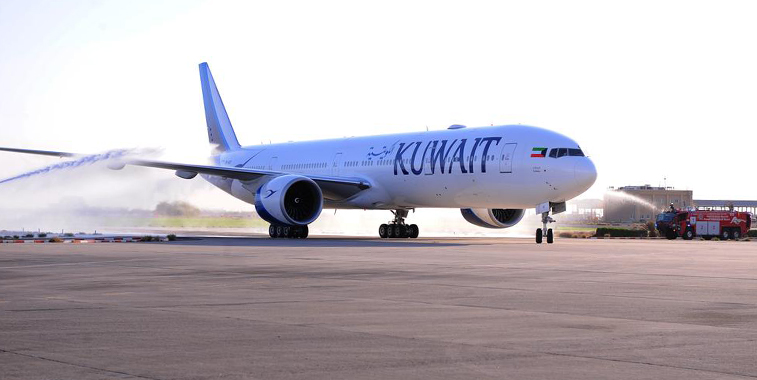 Kuwait Airways received its first 777-300 back in December 2016. The carrier is now operating nine of the type, with its tenth and final one expected in Q3 this year. As a result of these aircraft joining the fleet, Kuwait Airways’ seat capacity in S17 is up by nearly 33%, with three million passengers expected to be flown by the airline in 2017.

Kuwait Airways is currently in the process of a five-year turnaround plan, which includes an ambitious fleet modernisation programme. Among the fleet additions are 10 777-300s, with the last one expected in Q3 2017, as well as 15 A320neos and 10 A350s which will begin to arrive from 2019. The Middle Eastern airline has fallen short of fellow hub carriers in the region during previous years, with it struggling financially. The state-run airline has also faced several management changes, with Ebrahim Al-Khuzam replacing Rasha Al-Roumi as CEO in May. Al-Roumi was charged with leading the five-year turnaround plan of the airline, but left with her reasoning being “lack of government backing.” Despite these boardroom arrivals and departures, the impact of the initial phases of the five-year turnaround plan seems to be taking effect.

Kuwait Airways has had a bumper summer season this year, no doubt helped by the arrival of its 777-300s. In S17 the carrier is offering 3.95 million seats, up by an impressive 33% when compared to S16. This year is the first one this decade to see the airline offering over three million seats in a summer season. 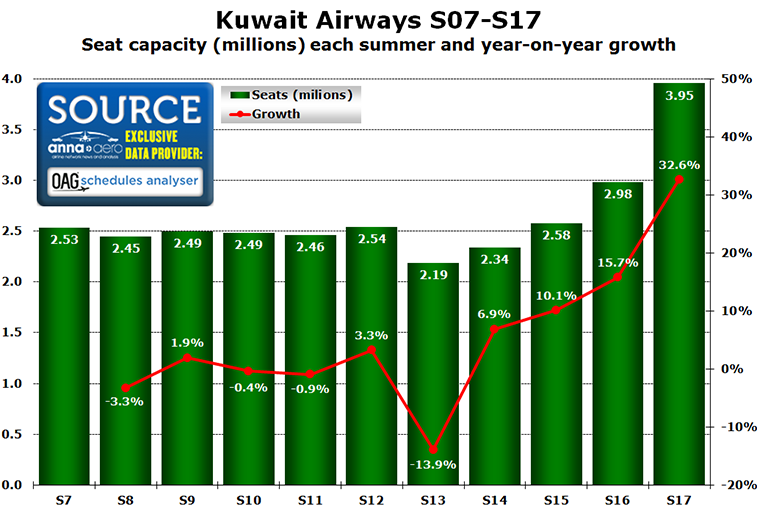 According to OAG Traffic Analyser data, Kuwait Airways carried approximately 2.87 million passengers in 2016, which is in-line with the carrier’s company profile which states that it expects to pass the three-million-passenger barrier in 2017. Given the sudden surge in capacity for the airline, this is a milestone objective which is highly likely to occur. The results of last year mean that Kuwait Airways’ traffic increased by around 18% in 2016, with it estimated to have flown 2.43 million in 2015. Again, this is a trend that fits into the same growth pattern seen in the carrier’s seat capacity. Of the 2.87 million passengers flown by Kuwait Airways last year, around 20% (802,790 passengers) of that traffic connected with the airline via Kuwait City, with the leading connecting destinations being Jeddah, Dhaka and Colombo.

With 2.87 million passengers being flown in 2016, it would mean that Kuwait Airways that year achieved an average theoretical load factor of 57% when we compare the traffic figure with OAG capacity data. While this is not a healthy result, the outcome indicates an improvement on the 51% average load factor it achieved in 2012, a year when the carrier flew around 2.11 million passengers.

With the arrival of the 777-300s, it has meant that Kuwait Airways’ regional services have welcomed significant capacity increases, no doubt with the airline using them for training on short sectors. One of the routes to see the biggest benefit of the new aircraft is Dubai, which has grown to become the airline’s second largest route in relation to available seats this summer after Jeddah. The carrier in S17 is offering 25 weekly flights to the UAE mega-hub, with 14 of those being operated by either a 777-300 or an A330-200. This compares to just 16 weekly flights last summer, with only two of those being wide-body rotations. Other beneficiaries of regional wide-body operations are Riyadh (seat capacity up 124%), Beirut (145%) and Amman (51%). These four routes are highlighted in light green in the table below. However, not all routes have been so fortunate as these, with two – Cairo and Manila (highlighted in red) – seeing capacity cuts of 9.4% and 16% respectively. Overall this summer Kuwait Airways is operating 39 routes from Kuwait, up from 38 in 2016, with the new addition being Najaf which began in December. 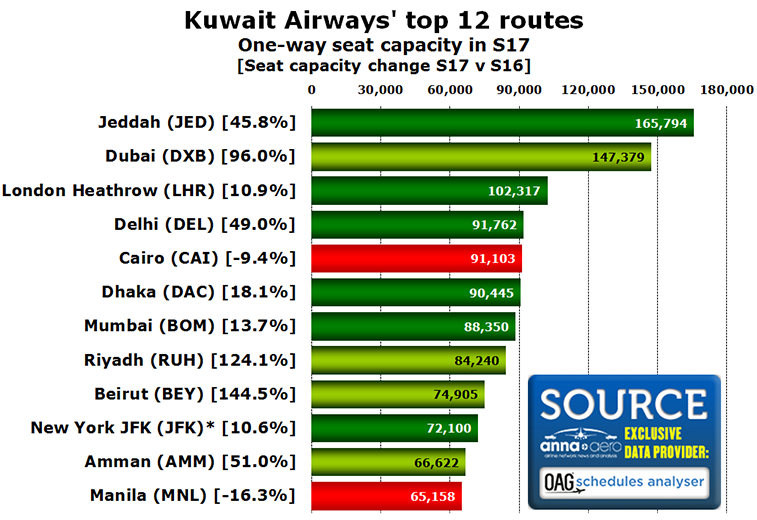 While the airline has seen a modest increase in capacity with new aircraft, it appears only existing services will be seeing flights with the latest units to join the fleet. Currently the airline has no plans to start new services. As stated, Najaf was the lastest addition to the Kuwait Airways network, and that was a city pair which was only a resumption after an 18-month hiatus. With the airline still going through its fleet overhaul, it could be 2019 before Kuwait Airways welcomes new cities to its network, once the extra A320s and new A350s arrive. 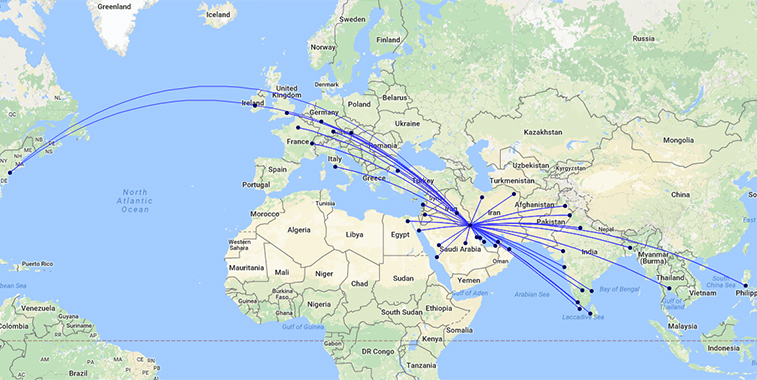 Kuwait Airways’ S17 route map. Currently the airline is operating to 39 destinations from Kuwait, with this excluding Shannon which is only a tech-stop on the carrier’s New York JFK operation. Currently the carrier has no new routes planned for next summer. With the next batch of new aircraft not arriving until 2019, there may not be any new routes until then.