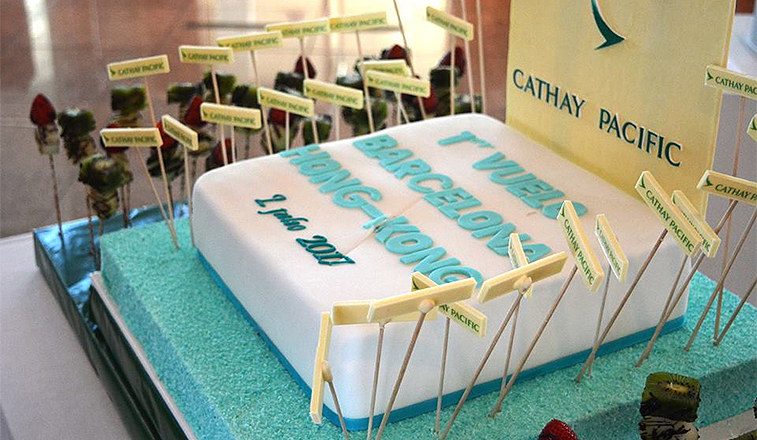 In June Barcelona became Cathay Pacific Airways’ 12th destination in Europe when it began seasonal services from Hong Kong. By S18 the oneworld member will serve 15 destinations on the continent now that Brussels, Copenhagen and Dublin routes have been announced. Due to this news, Geneva, Birmingham and Lisbon are now the top unserved markets in Europe from Hong Kong. The question is then, which city will be the next to get a direct link to Hong Kong?

On 31 August Cathay Pacific Airways announced that it will launch service to three European capital cities in 2018 – Brussels, Copenhagen (seasonal) and Dublin – all of which will be flown on the carrier’s A350s. The service to the Danish capital was suggested as a potential city pair for the oneworld carrier in March last year in our Unserved Route of the Week feature – so as usual we will be accepting some of the credit for this decision by Cathay Pacific. It also means that the first five of these potential city pairs are now served or will soon be, and that 16 out of 71 sectors featured (or 23%) have now been successfully converted to operational services. Well done to us and Skycanner!

It has been a positive few years for the Cathay Pacific with regards to European expansion, with it having added Barcelona, London Gatwick, Madrid, Düsseldorf, Zurich and Manchester since 2014. In total the airline will be serving 15 destinations in Europe during S18, along with Tel Aviv in Israel which was also added to the network this year.

For Dublin, Hong Kong becomes the airport’s first Far East destination, with Abu Dhabi, Doha and Dubai currently being its most easterly destinations. For Brussels, it already has flights to Bangkok Suvarnabhumi, Beijing, Tokyo Narita and Mumbai, while a service to Shanghai Pudong is scheduled to begin in October. Copenhagen also has regular flights to Asia, with Bangkok Suvarnabhumi, Beijing, Shanghai Pudong, Singapore and Tokyo Narita all served this summer. The Danish capital will also gain a direct link to Delhi with Air India, planned to start 16 September.

In 2016, when referring to OAG Traffic Analyser data, around 40,300 people flew indirectly between Dublin and Hong Kong. Approximately 54,600 flew between Copenhagen and the Asian hub, while 37,800 travelled to/from Brussels. What these numbers do not take into account is surface leakage which would be much greater from the Belgian capital due to its good land links to Amsterdam, Paris CDG and Düsseldorf, all of which are currently served by Cathay Pacific.

Now that Brussels, Copenhagen and Dublin will have direct flights to Hong Kong, it has paved the way for three other cities to become the top unserved markets in Europe from the Asian city. With that, Geneva from S18 will be the leading city in Europe to not have direct flights to Hong Kong, with an estimated indirect traffic flow in 2016 of 59 PDEW. The Swiss city is followed by Birmingham (52 PDEW) and Lisbon (49 PDEW) to complete the new top unserved routes in Europe from Hong Kong. 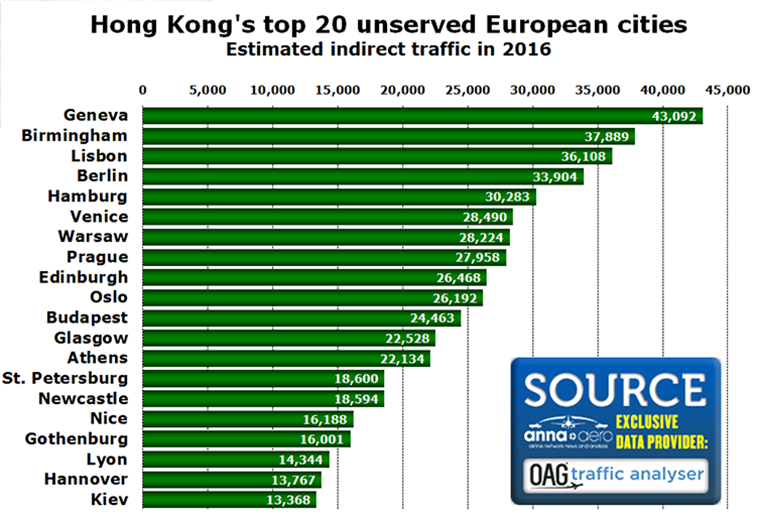 As stated, this data does not take into account leakage to other airports. While Geneva and Lisbon will see some leakage, Birmingham will surely see a greater amount, with it being within a two-hour drive of both London Heathrow (nine daily flights; six with Cathay Pacific; two British Airways; one Virgin Atlantic Airways) and Manchester (daily with Cathay Pacific).

Of the new top three unserved markets in Europe from Hong Kong, Geneva already has direct flights to Beijing with Air China, Birmingham is connected to Delhi with Air India and Lisbon recently welcomed Beijing Capital Airlines’ new three times weekly service from Beijing. So while all three have flights to Asia, Birmingham is the only one of the three to not have a non-stop flight to the Far East at present.

From Birmingham, Emirates is the leading carrier for connecting traffic, with it flying 48% of indirect passengers between the UK’s second city and Hong Kong, followed by Air France (15%) and Lufthansa (12%). Geneva’s top carrier to Hong Kong is SWISS, with it handling 23% of estimated traffic, with British Airways (15%) and Lufthansa (8.6%) taking second and third spot. For Lisbon, like Birmingham, Emirates is the leading airline, with it handling 42% of traffic, with British Airways (10%) and Air France (7.9%) completing the top three airline’s from the Portuguese capital for connections to Hong Kong. So with all three having strong markets to Hong Kong, it is just a question of which one will be confirmed as the next market to be served directly. 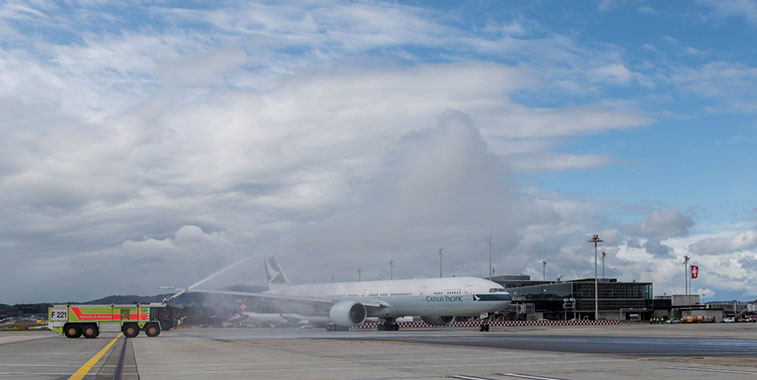 Cathay Pacific Airways relaunched flights to Zurich at the start of S15, ending a 14-year hiatus for the carrier on the route. Could Geneva become the airline’s second foray into Switzerland now that it is the leading unserved market in Europe from Hong Kong? Or could Birmingham or Lisbon be the next destinations the oneworld member serves?