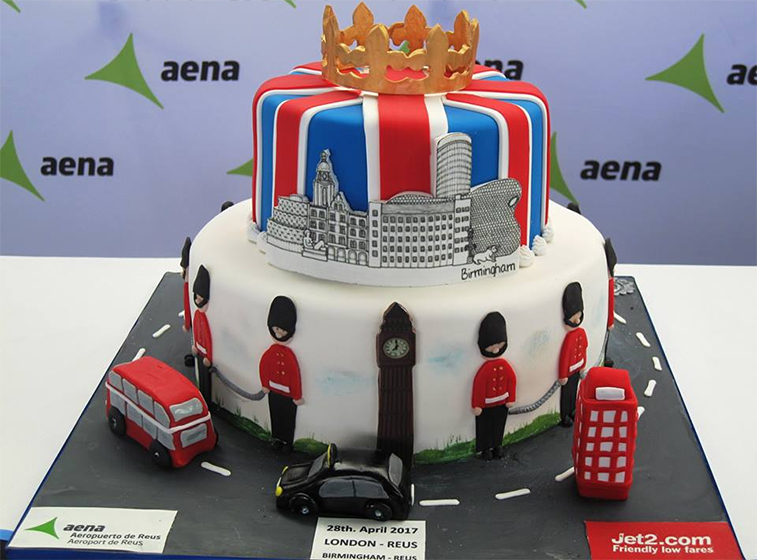 Earlier this summer Jet2.com started flights to Reus from Birmingham and London Stansted, with the Spanish airport celebrating the launches with this British-inspired cake. During H1 2017 Reus was the fastest growing airport in Spain, with it seeing a 32% increase in passengers during this period than it did in H1 2016.

Spain is indeed a hot-spot in Europe at the moment. In 2016 the country’s airports (which have 100,000+ annual passengers) handled over 230 million passengers, an increase of 11% when compared to 2015. This is a trend that looks to be continuing this year, with H1 2017 traffic up 9.1% when compared to H1 2016, with more than 113.2 million people flying from those same airports during the first six months of this year. While Madrid (25.38 million passengers during H1 2017), Barcelona (22.10 million) and Palma de Mallorca (11.37 million) are the nation’s three largest airports, handling 52% of passengers during H1 2017, it is Spain’s regional airports which are recording the best growth figures during this period.

Reus, La Palma and Santander are the fastest growing airports in 2017 so far

Reus in H1 2017 was the fastest growing airport in Spain (of those that handled over 100,000 annual passengers in 2016), with it seeing close to 32% more passengers during that time than it did in H1 2016. Currently it is the 27th largest airport in Spain, with it handling over 363,000 passengers during the first six months of 2017. Of the 33 airports which handle over 100,000 annual passengers in Spain last year, only one has encountered a decrease in traffic during H1 this year, with Melilla, which is the Spanish autonomous city situated in North Africa, seeing a 0.4% drop in passengers. It currently has direct flights to Malaga and Madrid.

Now it should be noted that the graph below does not include data for Castellon, run by Edeis, but just for airports within the Aena Group. While monthly traffic data is unavailable for Castellon (being unable to determine if it handled over 100,000 passengers in 2016), when referring to OAG Schedules Analyser data the airport has shown an increase in seat capacity of 88% for H1 2017, meaning that traffic is likely to be growing on a similar trend. In this case it would mean that Castellon would be the fastest growing airport in Spain during H1 this year, particularly as Reus is showing a growth in seat capacity of only 34%. 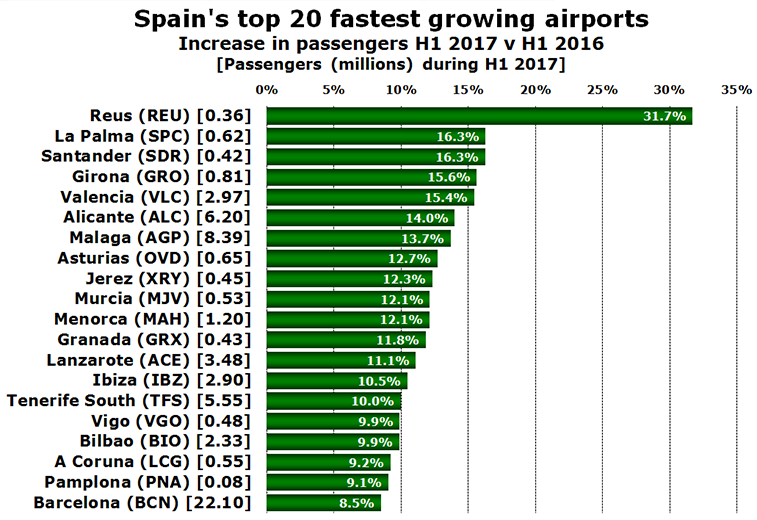 Ryanair leading airline, but market share not as dominant as it was

Last year over 39.9 million passengers travelled to/from Spain with Ryanair, with the Irish ULCC controlling 17% of the market in 2016. Despite last year being a record for Ryanair passengers from Spain, it is not its best year with regards to total market share, as the carrier recorded an 18% market share in 2012, a year in which the carrier flew just under 35.6 million passengers to/from Spain. Overall, Spain’s top 10 airlines accounted for 66% of all traffic in 2016. While it appears that the carriers outside of the top 10 have seen a reduction in their combined market share during previous years, it should be noted that in 2007, 2008 and 2009 airlines including clickair (pre-Vueling merger) and Spanair (liquidation) were still operating, and have been placed in that category as they are not operating in 2016. 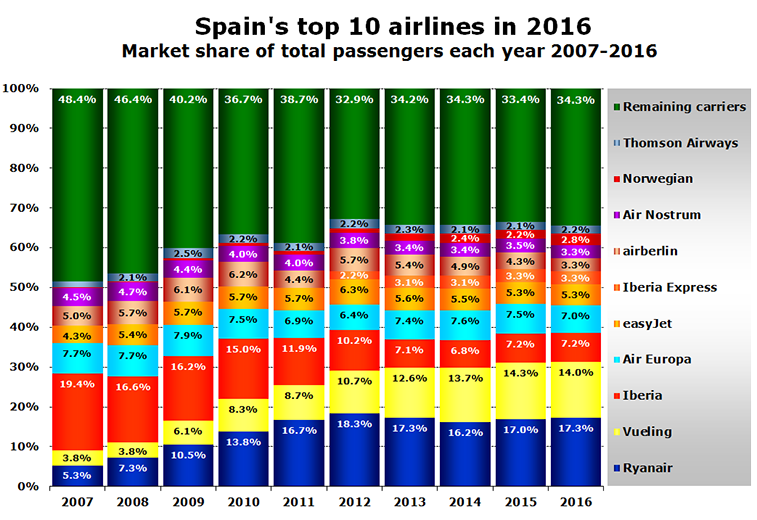 Source: Aena and UK CAA statistics for Ryanair routes to Castellon from Bristol and Stansted.

Of Spain’s leading airlines, it is Norwegian which took the title of star performer in 2016, with it flying over 40% more people than it did in 2015. It carried 6.44 million passengers last year, while in 2007 the airline only carried 290,000 passengers to/from Spain. airberlin has seen its share of the market drop from 5.0% in 2007 to 3.3% last year, and while Iberia has also seen a significant reduction in its market share (some of which has undoubtedly been back-filled by growth at IAG partners Vueling and Iberia Express), it should be pointed out that the airline’s traffic grew 10% last year to 16.59 million passengers.

The Spanish domestic market is still the leading sector, with it reporting over 29.5 million one-way seats in S17, an increase of 7.5% when compared to S16. The UK remains the number one international country pairing with Spain, with it witnessing double-digit growth this summer, along with another four country markets in the top 12 (highlighted in light green). 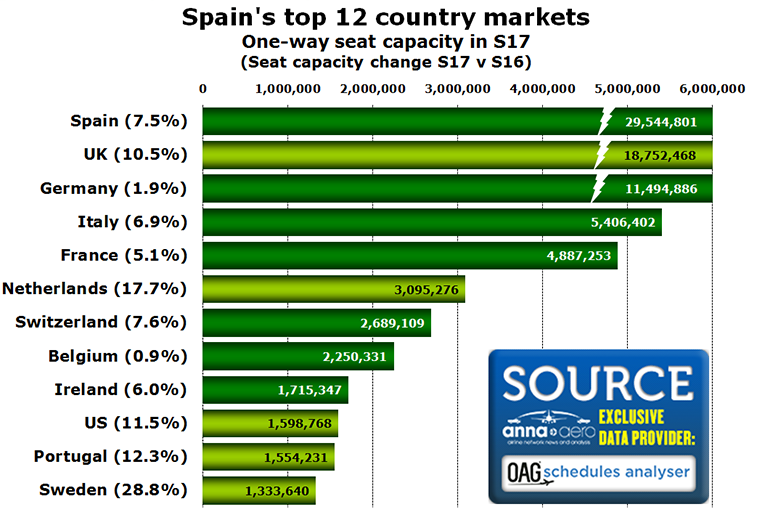 The only change in the country market order in the top 12 is Sweden, with it replacing Denmark after it delivered a respectable 29% increase in one-way seats during S17. It should be noted however that despite it falling from the top 12, Denmark is reporting a 13% increase in one-way seats to 1.21 million this summer. It is only when we get to 19th position that we see a country reporting a drop in capacity, with the unlucky pairing being with Austria. This summer capacity to the landlocked country is down by close to 15%, while Turkey in 20th position has also seen a drop in capacity, with its falling by 4.5% this summer when referring to OAG schedules. 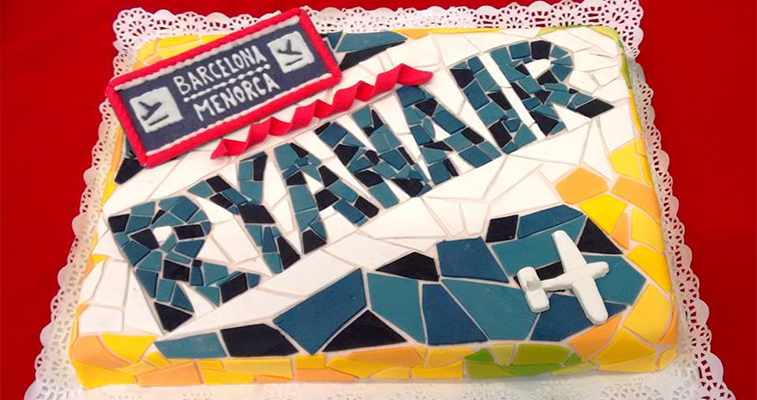 Late last year Ryanair commenced a new service between Barcelona and Menorca which was celebrated with this cake. Ryanair is currently Spain’s largest airline, with it holding a 17% market share of traffic in 2017. The domestic market is currently the nation’s largest, with it seeing a 7.5% rise in one-way seats in S17 when compared to S16.