St. Petersburg-New York is “Skyscanner Unserved Route of the Week” with 380,000 searches; Aeroflot to resume operations?? 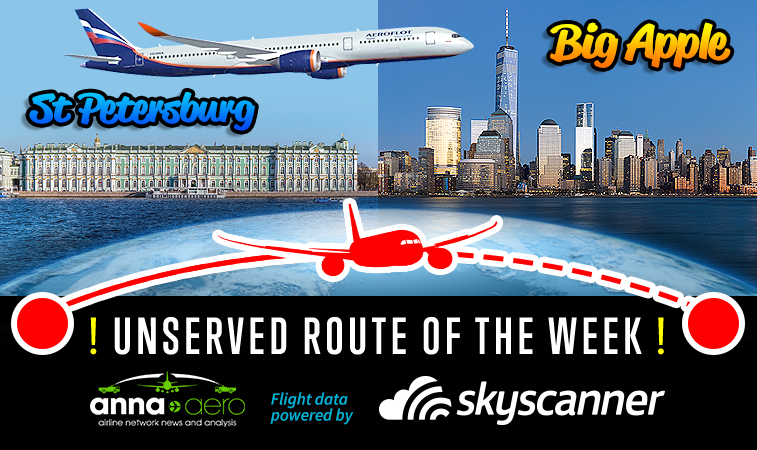 Would Aeroflot do it, again? NYC-St. Petersburg is a very big, very high-yielding gap in the market with 380,000 travellers annually searching Skyscanner for direct services between these two vast cities. However, local carriers may be unwilling to base the necessary wide-bodies in Russia’s second city (population five million), leaving this 85% Russian-demand route wide open to a very profitable Delta Air Lines market entry.

With over 380,000 searches in the last year, a potential city pair from St. Petersburg Pulkovo to New York has been identified as this week’s “Skyscanner-anna.aero Unserved Route of Week” – a powerful analysis based on aspirational data captured from the Skyscanner.net flight comparison site used by +60 million unique visitors per month. “New York has for many years been the top unserved destination from Pulkovo, both long-haul and in general,” says Evgeniy Ilyin, CCO at the Russian airport. “Our annual passenger surveys show the US being the most desired country of destination that has no direct service from St. Petersburg. This is confirmed by MIDT data, according to which, the annual indirect traffic between Pulkovo and points in the US exceeds 150,000 passengers – almost half of that number goes to New York.” 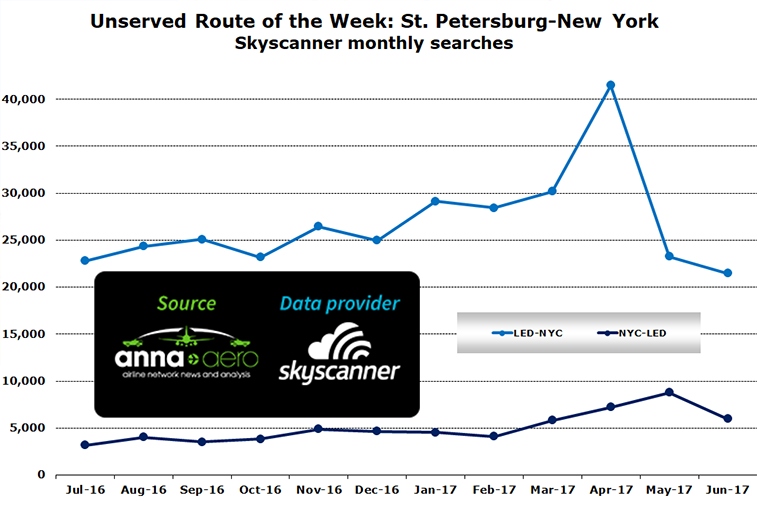 anna.aero advises Aeroflot or Delta to decide on this route

Skyscanner demand on this week’s unserved route shows a significant bias towards the St. Petersburg end of the city pair, with an 84/16 split, so on this basis we looked at potential carriers at the Russian origin first. At Pulkovo, the largest of its 60 serving airlines is Aeroflot, with Russia’s second city airport also being the SkyTeam carrier’s second biggest base (however, over four times smaller than its #1 hub at Moscow Sheremetyevo in terms of weekly seats). Technically, Aeroflot itself only performs flights from Pulkovo to Sheremetyevo. The rest of the services to other points are operated by Rossiya Airlines – a subsidiary of Aeroflot (its ownership is 75% Aeroflot/25% the city of St. Petersburg). It should also be noted that the airline did operate the New York route from St. Petersburg between October 1997 and March 2003, so the opportunity might be ripe for Aeroflot to take a second bite of the Big Apple.

Aeroflot controls 41% of capacity at the airport according to OAG data for the week commencing 31 August. The airline currently offers 47 destinations from Pulkovo, including 24 international non-stop services. However, these are currently limited primarily to destinations across Europe and the Middle East. In fact the carrier does not offer any direct destination from St. Petersburg over 4,500 kilometres in length. The only sectors that Aeroflot operates with long-haul equipment at the airport is the 1,658-kilometre route to Simferopol, on which it utilises 747-400s, 777-200s and -300s (presumably some of these are inherited from Transaero Airlines). On this basis, it would seem unlikely that Aeroflot is going to base a wide-body aircraft at Pulkovo in the near future, however if there was one route which may tempt it to do so it would be New York, particularly as the carrier has a three times daily operation from Sheremetyevo.

The same can be said of Pulkovo’s second, third and fourth largest airlines – namely S7 Airlines (7.0% share), Ural Airlines (5.3%) and Nordavia Airlines (4.1%) – which all serve predominantly domestic and limited regional destinations from St. Petersburg at the moment, and are therefore again unlikely to begin operations to the US. Indeed none of them have any existing transatlantic operations, which could be because they are not authorised to do so under the existing bilateral agreement between the two countries. The airport’s fifth biggest operator, VIM Airlines does at least fly one long-haul sector from Pulkovo, albeit east to Shanghai Pudong rather than west across the Atlantic. At 7,134 kilometres, the Chinese sector which is flown on its 220-seat 757-200s, is slightly longer than the potential 6,908-kilometre route to New York, so it may well be capable of using the same aircraft to the US city. But again its aspirations to do so may well be limited by its lack of experience in the market (it too has no existing flights to the US) or the necessary bilateral permissions.

“New York is on the strategic route list of new destinations support programme offered to airlines by the airport jointly with the city administration of St. Petersburg,” confides Ilyin. “Together with the airport’s own incentive programme the bonuses for the route launch can reach up to 95% on all airport charges.” 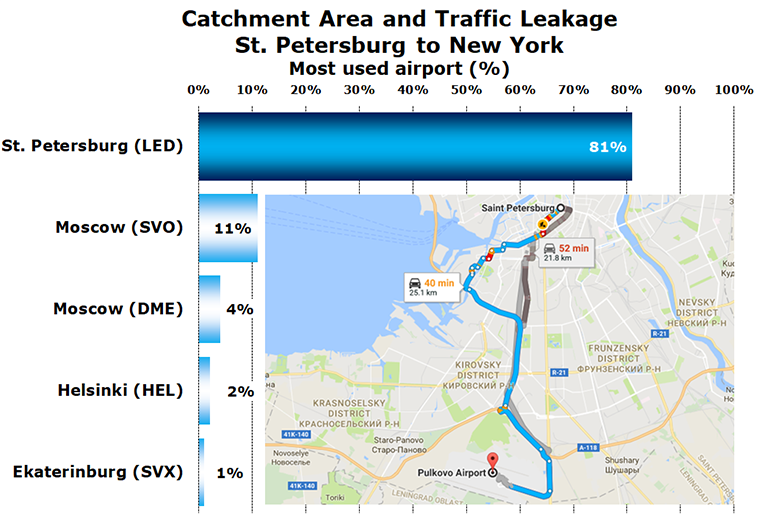 Faical Allou Skyscanner’s Business Development Manager says: “St. Petersburg serves 81% of the traffic from the catchment (50 km around the airport) going to New York. With better service, such as a non-stop operation, the traffic could grow by 23%.”

Considering the New York end of the route, there are of course two airport options for the potential St. Petersburg service – JFK and Newark (primarily domestic LaGuardia has been omitted from this analysis). The former airport’s largest carrier (25% share) is Delta Air Lines, which flies to 25 European destinations this summer, including two non-stop sectors to Central or Eastern Europe – Prague (daily) and more notably Sheremetyevo (three times weekly). With operations to Russia already being flown from the airport, at least the SkyTeam carrier has the experience to consider further routes in the country. Contrast that to the #3 carrier at JFK, American Airlines (second largest carrier (23%) JetBlue Airways does not have the equipment to consider this route at present), which has a 12% share of weekly seats, with its network of 10 European destinations from the airport, none of which are currently in Central or Eastern Europe.

Across Manhattan Island and into New Jersey, Newark is dominated by United Airlines (64% share). Its 149 non-stop destination network does feature only one less European point than Delta, with 24 airports served, but similar to American it presently does not fly to any point in Central or Eastern Europe from any of its bases. On this basis, it would seem unlikely that the Star Alliance carrier will begin flights to St. Petersburg from Newark in the short-term without a change in network strategy, leaving the door open for Delta to start operations on the city pair from JFK.

“When it is hopefully launched, the Pulkovo-New York route will be the first route from St. Petersburg to the Americas. It will serve not only as a point-to-point destination, but also as a major connection hub for the residents of St. Petersburg and north-western part of Russia travelling to the US, Canada and Latin America. The same goes for those coming to visit St. Petersburg, which is not only Russia’s second and Europe’s third largest city in terms of population, but it is also the world’s leading cultural destination according to World Travel Awards 2016, and one of the most attractive tourist destinations on the planet,” enthuses Ilyin.

When looking at the previous year of search data, the busiest month for potential traffic flows (for both directions on the route combined) is April 2017, with nearly 49,000 searches, around 23,000 higher than the lowest monthly figure, which was recorded in July 2016 (26,000 searches). The seasonality profile of this search data is slight more extreme than the last Unserved Route of the Week (Gold Coast to Seoul) with the low-month traffic representing 53% of the highest month. According to OAG Traffic Analyser, because there is no direct service, the top three connecting options chosen by those passengers who did book travel between St. Petersburg and New York in the last year indicates that the majority of connecting travellers used Sheremetyevo (44%), Helsinki (18%) and Paris CDG (10%). When looking at traffic flows in the opposite direction, while the top two airports are unchanged, London Heathrow has just snaked ahead of its European hub rival to claim third spot.

Indeed, an O&D that is not served by a non-stop flight will typically display a low purchase rate and low traffic. In this instance Skyscanner’s Travel Insight indicates a monthly average of 6.4% for the St. Petersburg to New York route (see graph below). Therefore, if there was an St. Petersburg to New York route, and if bookings performed in line with the “Skyscanner market average” for direct services at both airports (7.0%), the airline operating this route could immediately expect an improved purchase rate of 9.4%, without any increased marketing spend. However, with over 400,000 annual searches in the past 12 months, a daily service should be immediately viable for the airline selecting to start this potential city pair. “The demand on the route remains high, with estimated potential frequency reaching four flights a week in the winter season and growing to daily operations in the summer season,” offers Ilyin. 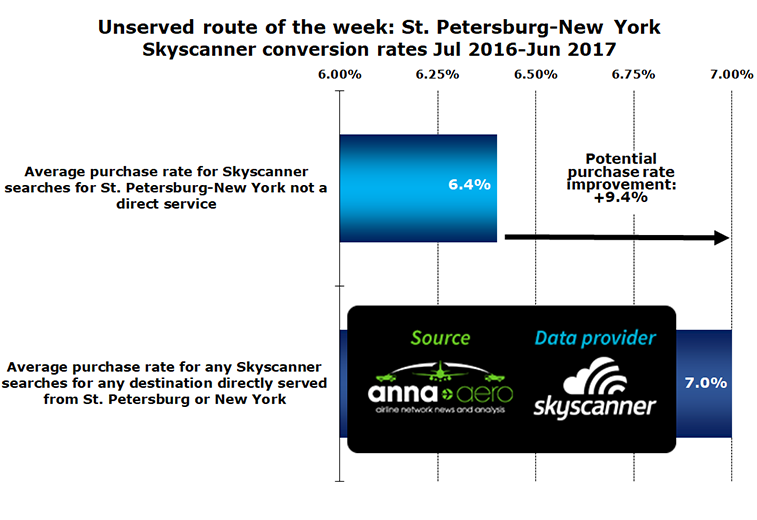