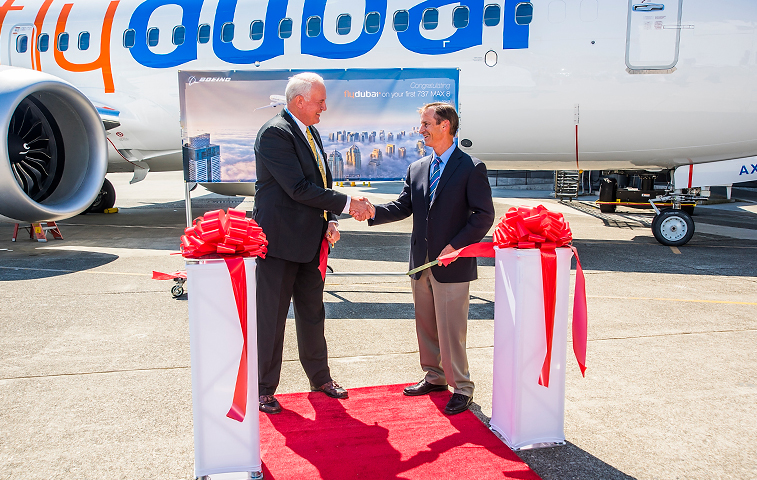 In July flydubai became the first carrier based in the Middle East to operate the 737 MAX 8. Seen accepting the aircraft in Seattle is flydubai’s SVP of Flight Operations Jim Vial, seen here shaking hands with Martin Bentrott, VP Sales for Middle East, Russia & Central Asia, Boeing. The carrier has an order for 75 of the aircraft type.

During the seventh month of this year Boeing and Airbus delivered 105 aircraft combined, up seven units from the total they achieved in the same month of 2016. The achievements of July however are lower than those managed in June, a month which witnessed both companies deliver 139 units. Boeing, for the sixth month this year, was the star performer of the two manufacturers when it came to the total of units distributed, with the US supplier handing over 58 aircraft in July, 11 more than the 47 achieved by Airbus. With that, it means Boeing has increased its lead over Airbus in the 2017 delivery race so far to 57 units (up until 31 July). In total, both companies have delivered 763 aircraft in 2017, down from the 771 that both had achieved at this point last year. This represents a marginal drop in productivity, in relation to deliveries, of 1.0% for the period analysed. In July, 30% of unit deliveries from both airframers were wide-body variants, with the remaining 70% narrow-body. This compares to the 27% wide-body, 73% narrow-body ratio recorded in July 2016. 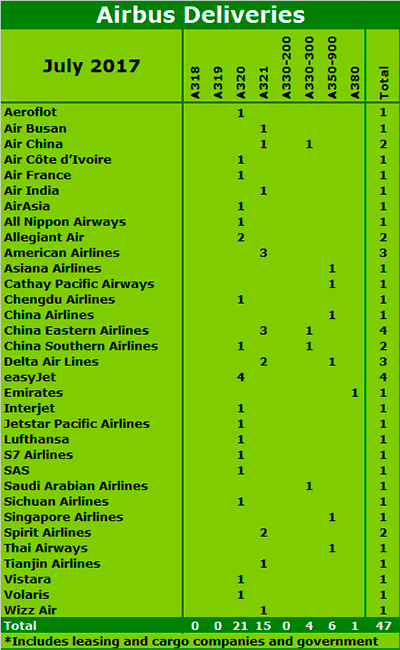 Airbus delivered 47 aircraft in July, down 17 units from the 64 it delivered in June. However, the result is better than it managed in July 2016, a month which saw the European giant distribute 41 units. For the seventh month of 2017, single-aisle deliveries were led by the A320 (21 units) followed by the A321 (15). The leading customer of the former aircraft type was easyJet which collected four units, with one of those being the carrier’s second A320neo. Following easyJet, Allegiant Air was the second largest recipient of the A320, with it picking up two. A further 15 airlines each collected one A320. The leading customers of the A321 were American Airlines and China Eastern Airlines, with both collecting three each.

In relation to the wide-body market, Airbus delivered 11 units, three less than the 14 it managed in June. The leading aircraft type for the fourth month in a row was the A350, with six being handed over to six different carriers. With this, it means that Airbus has now delivered over 100 A350s since the first one was given to Qatar Airways in December 2014. The world’s leading A380 operator, Emirates, collected a further unit in July, with it now operating 97 of the type. Along with the A350 and A380, four A330-300s were also distributed in July to four different operators. 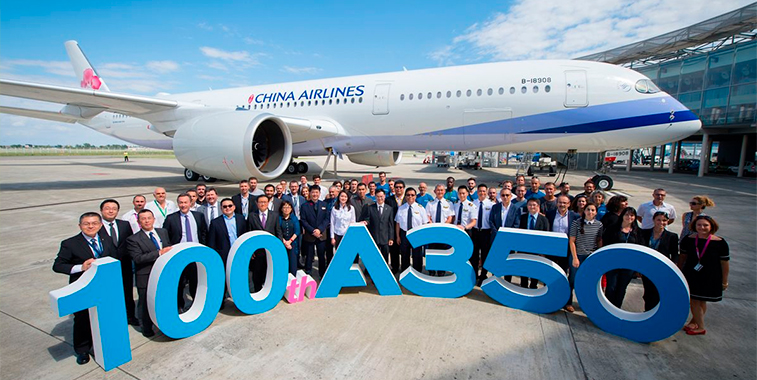 In July Airbus delivered its 100th A350 to China Airlines at a special ceremony in Toulouse, with the milestone unit being the carrier’s seventh of the type. The delivery of the 100th aircraft took place 30 months after the first ever one was provided to Qatar Airways in December 2014. As of the end of June, Airbus’ A350 family had logged 847 firm orders from 45 customers. 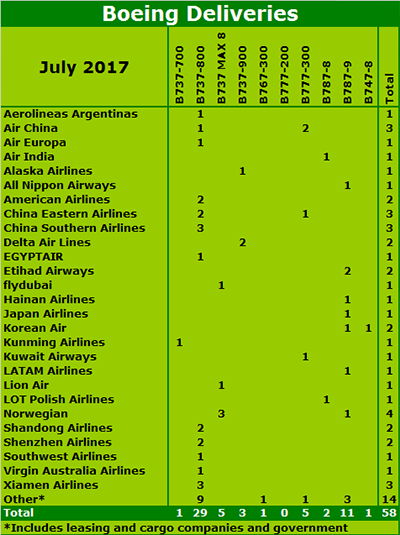 Boeing delivered 58 aircraft in July, of which five were the airline’s new 737 MAX 8. This means the company has now handed over 11 of the type (up until 31 July). Norwegian picked up a further three 737 MAX 8s in July, meaning it now has five of the type in operation. The most popular narrow-body unit in July was the 737-800, with 29 being handed over, 12 less than Boeing distributed in June. The main customers for the 737-800 were China Southern Airlines and Xiamen Airlines, with both collecting three each, while American Airlines, China Eastern Airlines, Shandong Airlines and Shenzhen Airlines all picked up two. In total for July, Boeing handed over 38 narrow-body aircraft, two more than Airbus achieved. Along with the 737-800 and 737 MAX 8s, one 737-700, accepted by Kunming Airlines, and three 737-900s were also delivered in July.

An analysis of the wide-body market shows that Boeing handed over 20 wide-body aircraft in July, six less than it managed in June, but equal to its result for May. The leading model to be delivered was the 787-9, with 11 being handed over. The premier customer of the 787-9 was Eithad Airways which collected two. Along with the 787-9s, five 777-300s, two 787-8s and one 747-8 were delivered in the seventh month of 2017. 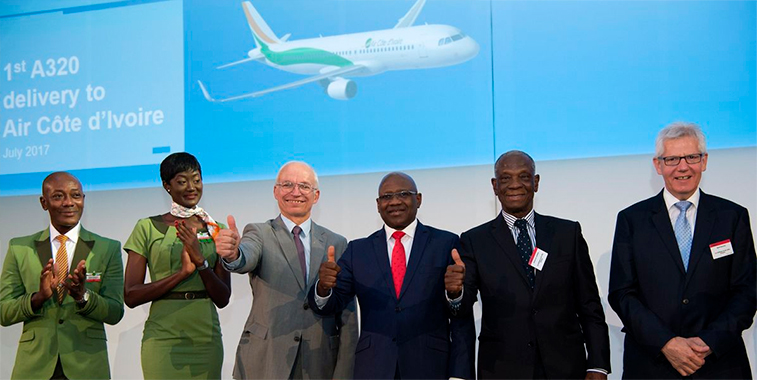 Air Côte d’Ivoire, the Ivory Coast’s flagship airline based in Abidjan, received its new A320 at a ceremony that was held at the Airbus Delivery Centre in Toulouse on Monday 17 July. Seen celebrating the arrival of the aircraft into the airline’s fleet along with the crew are: Didier Evrard, EVP Head of Programmes at Airbus; Bakari Soho, Director of the Cabinet of the Ministry of Transport for the Ivory Coast; Abdoulaye Coulibaly, Chaimen of the Board, Air Côte d’Ivoire; and René Decurey, Director General, Air Côte d’Ivoire. In total the airline has an order for a further four A320s of which two are A320neos.