Kansas City is now the largest unserved market in the US from Europe; over 40 airports in the US to have direct flights in S18 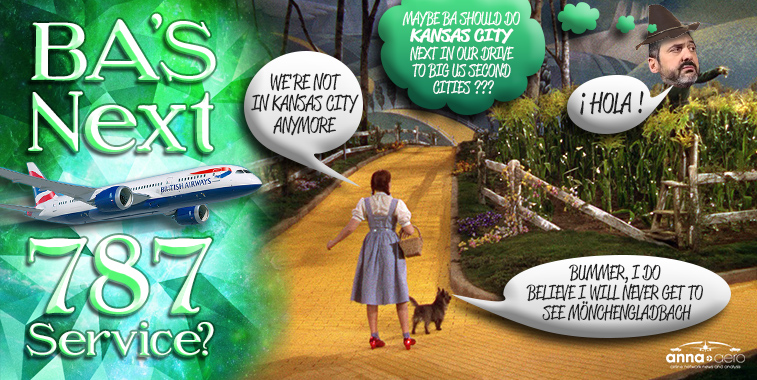 Will British Airways CEO, Alex Cruz be the Wizard of Kansas City? After launching London Heathrow-Austin, and recently announcing Heathrow-Nashville, it’s absolutely certain BA will now be looking at London-Kansas City. With 120,000 travellers struggling between Kansas City and Europe by indirect means, the market closely resembles Austin-Europe where BA’s magic has stimulated demand by 50% since the route started. (Apologies to Kansas and Kansas City MO for this cliché – we do know the distinction, it was just too tempting.)

It has been a busy few weeks for S18 route announcements for North America–Europe flights, with many new airports in the US gaining transatlantic status from next summer. Cleveland and St. Louis with WOW air (Reykjavik/Keflavik), Nashville with British Airways (London Heathrow), plus Indianapolis with Delta Air Lines (Paris CDG) will all have non-stop service to Europe next year. For Cleveland it is a double-whammy, as it will also welcome Icelandair (from mid-May) with flights from the Icelandic capital. So, with these four cities joining the transatlantic network, what cities have become the next untapped markets in the US with need for non-stop flights from Europe?

When referring to OAG Traffic Analyser data, Kansas City for S18 will be the leading unserved US market from Europe, with an estimated indirect traffic flow between September 2016 and August 2017 of just under 117,000 passengers. This represents an average PDEW between Kansas City and Europe during the 12-month period of 160 passengers. Following Kansas City, and to round up the top three unserved markets heading into 2018, are Columbus (157 PDEW) and Jacksonville (128 PDEW). It should be noted that airports which have announced European flights for S18 have been excluded from the analysis. 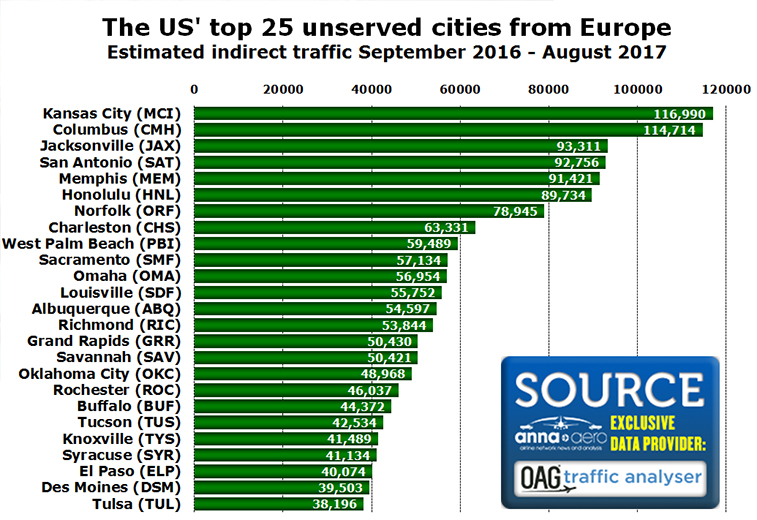 For the first time in recent history, over 40 US airports during one season will have a non-stop service to Europe, with 43 showing to have direct flights in S18. The total for next summer is 12 more airports than the 31 indicated in S07. New airports to see non-stop flights this summer include Stewart in New York state (Norwegian) and New Orleans (British Airways and Condor). 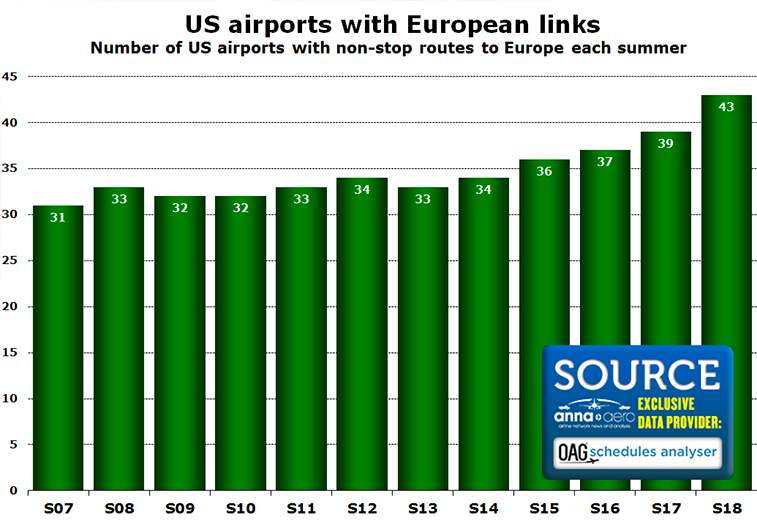 The largest airport in the US for S17 (not all S18 airline schedules have been published) in relation to seats from Europe is New York JFK (22% of all seats between the US and Europe in S17), followed by New York Newark (8.8%) and Chicago O’Hare (7.6%). Overall this summer, seat capacity between Europe and the US increased by 6.9% to over 28.67 million seats. This compares to 26.81 million in S16. 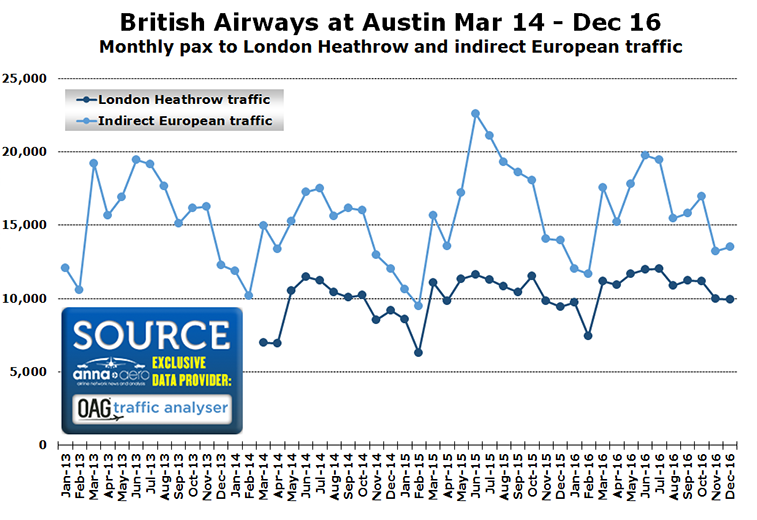 In the 12 months before the inauguration of BA’s new service, there were approximately 190,600 indirect passengers between Austin and Europe. From March 2014 to February 2015, the first 12 months of BA’s operation, the level of indirect traffic between Austin and Europe fell by 10% to 171,200 annual passengers. If we include BA’s statistics for its first 12 months of service (110,497 passengers – 58% of the indirect market size in the 12 months before the launch), Austin saw an estimated combined total of 281,700 passengers, representing an increase of 48% for traffic between Austin and Europe. During 2015, there was an estimated 194,100 indirect travellers between Texan city and Europe, slightly above the number experienced before BA’s new service was introduced, meaning that the new route helped to stimulate overall traffic in the Austin-Europe market. The potential for market stimulation is surely behind the reasoning for Condor to introduce Austin to its network during 2016, while Norwegian will begin London Gatwick services for the start of S18, bringing for the first time a low-cost player into the Austin to Europe market. What is interesting to note in the above graph is that the monthly passenger flows seen on BA’s direct service mirrors closely the flows for indirect traffic.

If we use this data as guidance towards what can be expected when a direct service between Kansas City and Europe potentially starts, initially in its first year the route could expect to carry 67,800 passengers (based on the 58% indirect market size ratio). If Kansas City’s indirect traffic fell 10% within the first 12 months of operation (same as Austin), combined with a potential direct market stimulation, traffic could rise to over 173,000 direct and indirect passengers between the US city and Europe. 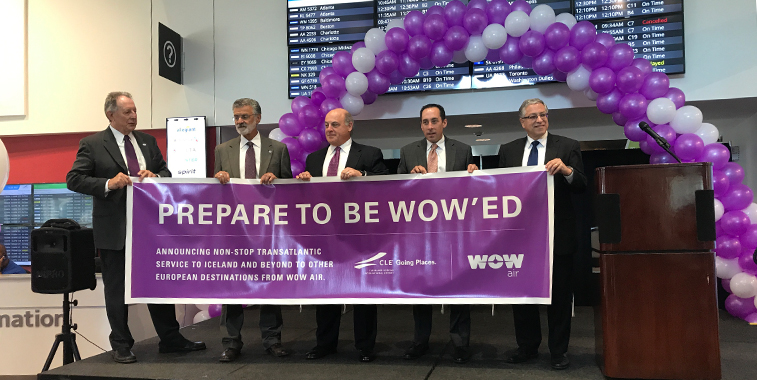 Back in August WOW air announced that Cleveland will be joining its network, along with Cincinnati, St. Louis and Detroit, while Dallas/Fort Worth has been announced since. Seen at the Cleveland announcement are: Robert Kennedy, Director of Airports; Frank Jackson, Mayor of Cleveland; Lee Thomas, Chairman, Greater Cleveland Partnership Air Service Task Force; David Gilbert, President and CEO, Destination Cleveland; and Armand Budish, Cuyahoga County Executive. With the announcement of Cleveland, Cincinnati and St. Louis, it now means that Kansas City is now the largest unserved market in the US with regards to passengers to/from Europe.