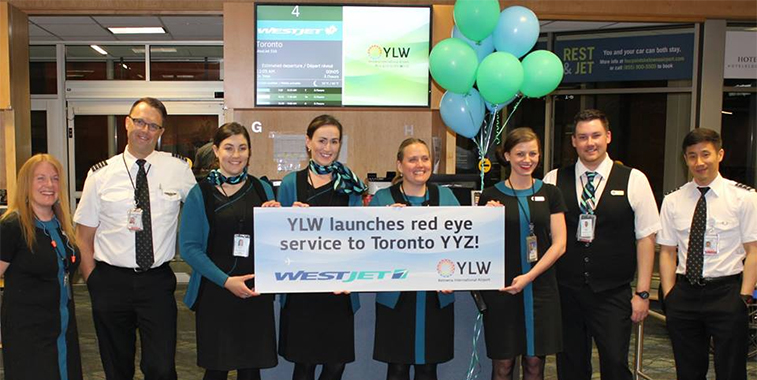 Kelowna Airport welcomed the start of WestJet’s red-eye service to Toronto Pearson back in May. For H1 2017 the airport is showing traffic growth of just under 13%, making it the fastest growing top 10 airport in Canada for the first half of this year.  Pearson remains the leading airport in the nation, with it seeing growth of 7.5% during the same period.

Canada’s busiest airports (in relation to passengers transported) witnessed 61.9 million passengers transit through their retrospective terminals during the first sixth months of 2017 (excluding Toronto City Airport due to unavailable statistics), up 6.6% when compared to the same period of 2016. All airports in this category saw passenger throughput increase, with the best being Kelowna, with it encountering a very healthy rise in traffic of just under 13% to 930,849 passengers for H1 2017. The smallest growth was recorded at Canada’s capital city airport, with Ottawa producing a 1.2% rise to just under 2.38 million passengers between January and June. 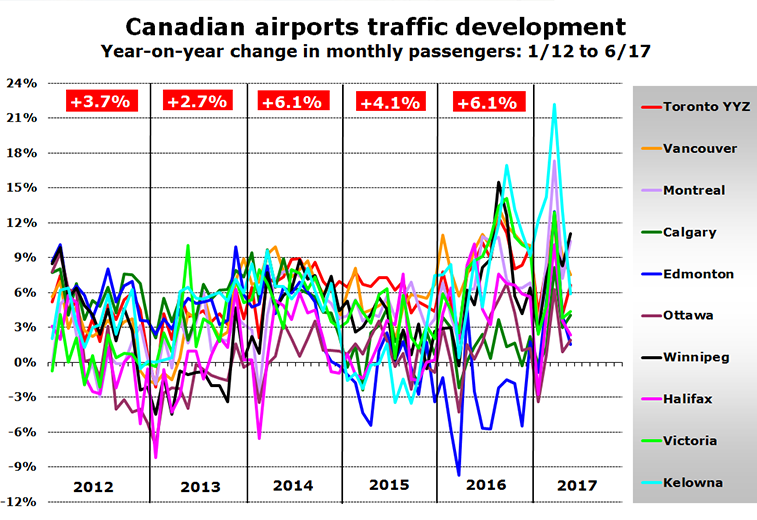 The top airports have seen varying range of performance so far this year, with the worst recorded individual month coming from Ottawa, which saw traffic drop 3.4% in February, while the best month was encountered at Kelowna, which in April saw traffic grow by22%. Overall, Canada’s top airports handled an extra 3.84 million passengers during H1 2017 when compared to H1 2016.

As can be seen in the graph above, Canadian air traffic is growing at a much higher rate this year than last, with the average monthly increase in traffic of the top airports combined for H1 2017 being 6.4%, this compares to average of 3.7% seen during H1 2016. The best performing month this year so far is April, with the average increase in traffic at Canada’s top airports being just under 13%. The worst performing month is February which recorded an average of 2.0%, however 2016 was a leap year which will be a factor in why growth was below the mean seen so far this year.

Domestic traffic up at all airports

The eight busiest Canadian airports all break down their traffic figures into domestic, transborder (US) and international (non-US). A graph of H1 2017 ‘growth’ for each airport by geographic region reveals that domestic traffic was up at all eight airports, with the best of the bunch being Winnipeg which experienced an impressive 10% rise in traffic in this sector. With regards to the transborder market, only Canada’s four busiest airports, namely Toronto Pearson (transborder traffic up 7.2% in H1 2017), Vancouver (9.5%), Montreal (4.1%) and Calgary (6.9%) witnessed a rise in passengers to the US. Edmonton was the worst performing with regards to this sector, with in registering a 9.5% drop in passenger flows across the border for the first six months of this year. 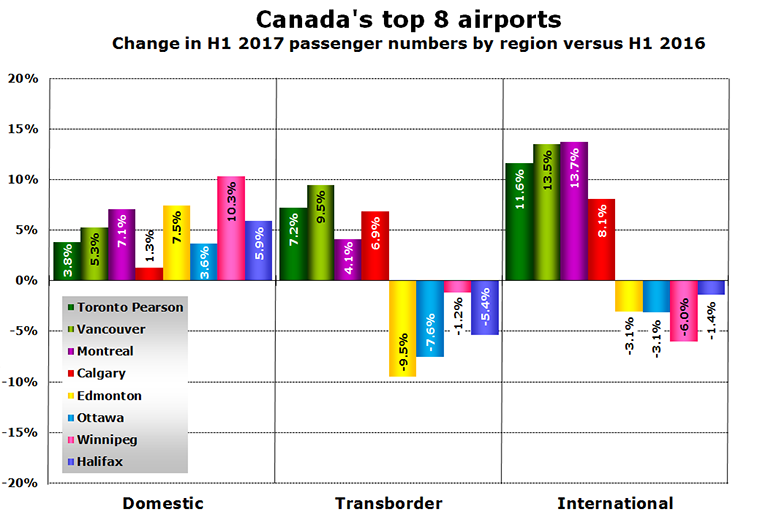 Like the transborder market, the same four airports to record growth to the US were also the only airports to see strong growth in the international market (excluding US), with Montreal being the leader by delivering close to a 14% rise in this market. Winnipeg, despite being the best airport for domestic growth, was the worst performer with regards to international services, with it posting a 6.0% cut in passengers for H1 this year. So while all of the leading airports in Canada reported growth during the first six months of this year, it seems that domestic traffic is driving regional airports, while Canada’s major cities are more reliant on non-Canadian services to help increase passenger numbers. 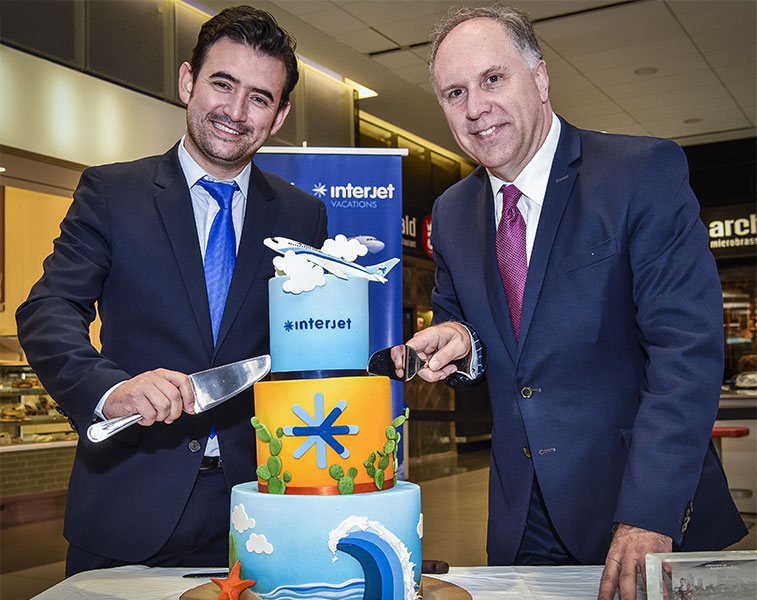 Earlier this summer Montreal Airport welcomed the arrival of Interjet which introduced flights from Mexico City and Cancún. Seen cutting the cake are Andrès Martinez Reynoso, Director Marketing & PR Interjet and Philippe Rainville President & CEO Aéroports de Montréal. Montreal in H1 2017 was the leading airport in Canada with regards to growth in the international sector (excluding US services), with traffic up by close to 14% when compared to H1 2016.