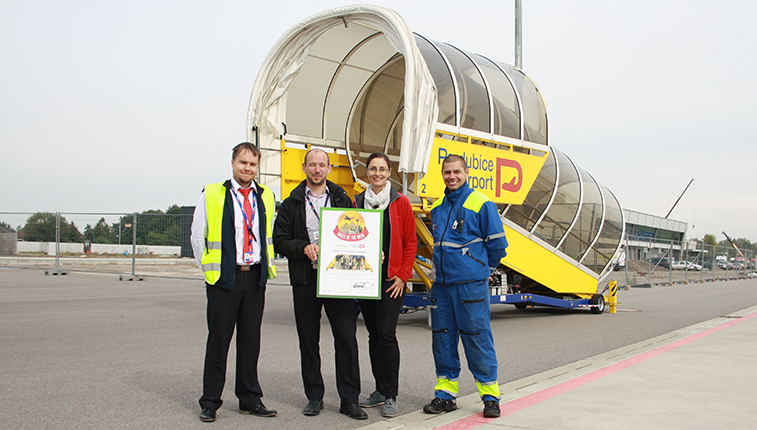 Pardubice Airport in the Czech Republic recently celebrated winning the anna.aero Route of the Week award, given for Ryanair’s new service from London Stansted. The Irish ULCC will operate the link from the UK capital three times weekly (Tuesdays, Thursdays and Saturdays). With the launch of flights to Pardubice, Ryanair now serves four airports in the Czech Republic, with the regional airport joining Prague, Brno and Ostrava. 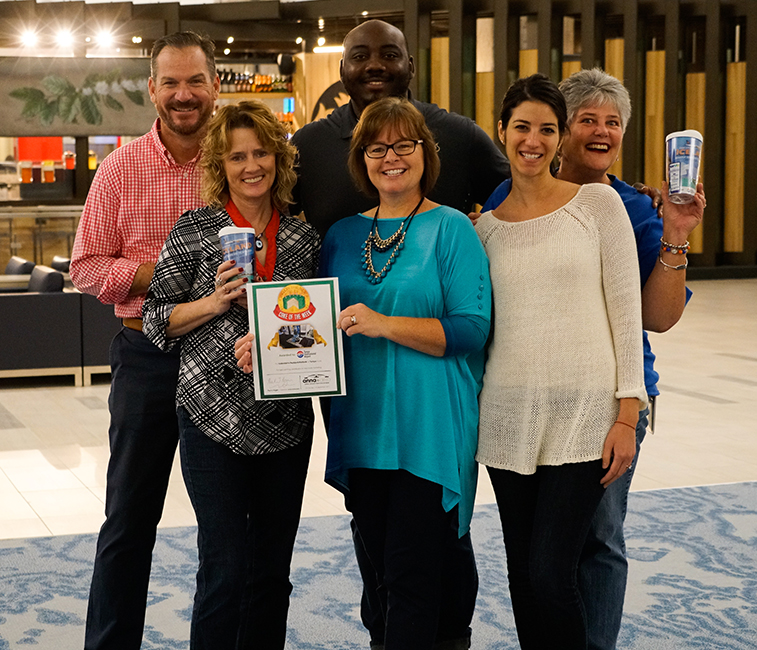 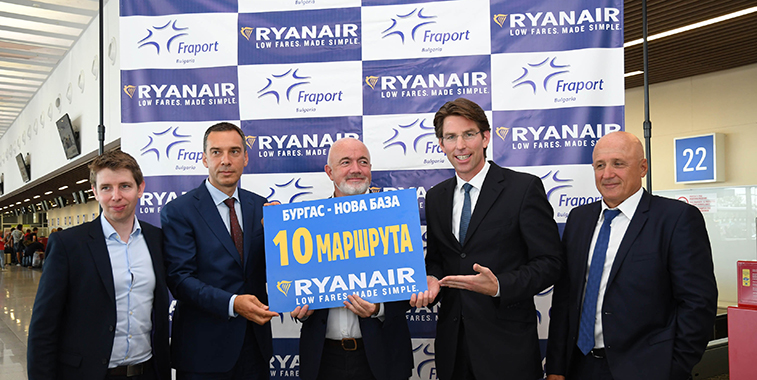 Ryanair announced on 19 September that it would open a base at Bourgas in Bulgaria from S18. Seen at the base announcement at the Black Sea Coast airport are: Neal McMahon, Director of Route Development, Ryanair; Dimitar Nikolov, Mayor of Bourgas; David O’Brien, CCO of Ryanair; Ulrich Heppe, CEO of Fraport Bulgaria; and Georgi Chipilski, Director of Bourgas Airport. The airline will station one 737-800 at what will be the carrier’s 87th base, allowing it to open 10 routes to Bratislava, Frankfurt Hahn, Krakow, Memmingen, Milan Bergamo, Riga, Rzeszow, Tel Aviv, Warsaw Modlin and Weeze (all twice-weekly, apart from Rzeszow which will be served weekly). The base is expected to create 250,000 passengers per annum. “We are pleased to announce a new Bourgas base, opening at the end of March, our second in Bulgaria (after Sofia) and 87th in Europe,” commented O’Brien. “We are also pleased to launch our record Bulgaria S18 schedule with 15 new routes which will help deliver over two million customers a year through Sofia, Bourgas, Plovdiv and Varna airports. 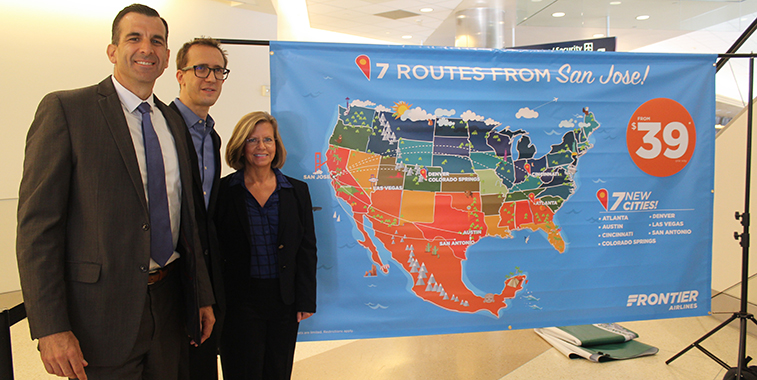 On 19 September San Jose Airport welcomed the news that Frontier Airlines will open five new routes from the airport at the start of S18, adding to the new routes to Denver and Las Vegas which are expected to begin in the coming weeks. From April, the ULCC will begin service to Atlanta, Austin, Cincinnati, Colorado Springs and San Antonio. Seen announcing the expansion at the Californian airport are: San José Mayor, Sam Liccardo; Daniel Shurz, SVP Commercial, Frontier Airlines; and Judy Ross, Interim Assistant Director of Aviation, San Jose Airport. 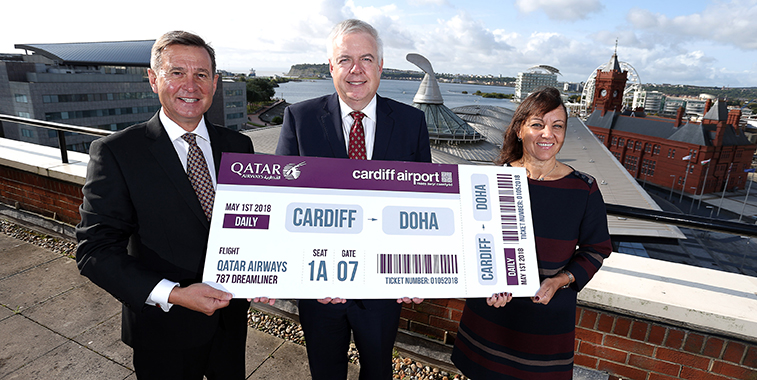 Having recently confirmed its intentions to serve Cardiff from S18, Qatar Airways this week confirmed that it will begin flights to the Welsh capital from 1 May next year. The oneworld member will link the UK city to its Doha hub daily on 787-8s. Seen promoting the new service are: Roger Lewis, Chairman of Cardiff Airport; Rt. Hon Carwyn Jones AM, First Minister of Wales; and Deb Barber, CEO of Cardiff Airport. Cardiff becomes the airline’s fifth destination in the UK after Birmingham, Edinburgh, London Heathrow and Manchester. With this route, eight UK airports in S18 will have services from a MEB3 carrier. 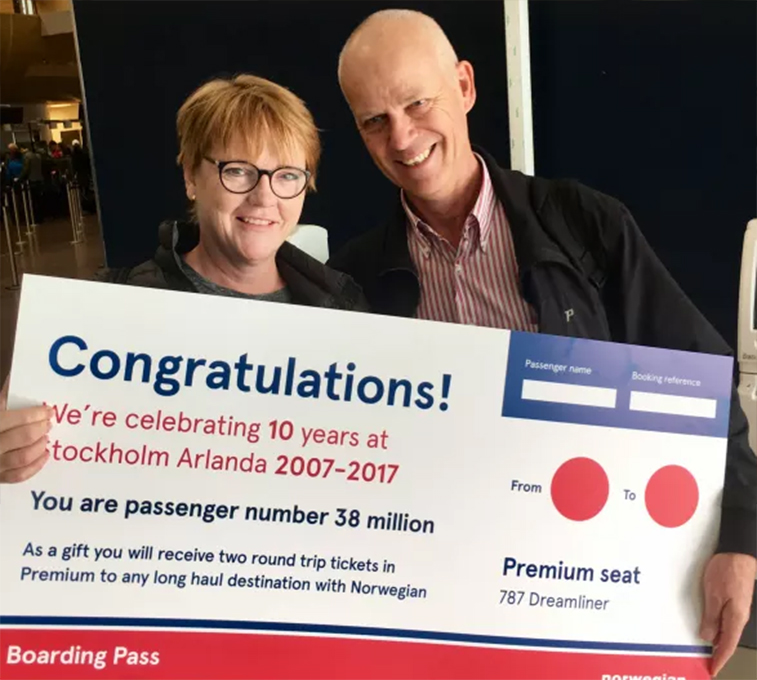 Norwegian this week celebrated 10 years of operations from Stockholm Arlanda. Since beginning flights from Arlanda in 2007, the carrier has gone from strength-to-strength, and in the past decade has flown 38 million passengers from the Swedish capital city airport. Evastina Lönngern, who was on her way to London Gatwick with husband Mats Lönngren, was surprised to be Norwegian’s 38 millionth passenger from Arlanda. “Since its launch, Norwegian has grown by more than 25% on average every year at Swedavia’s ten airports, so that is very strong growth. Norwegian plays an important role in the development of Stockholm Arlanda’s long-haul routes, and the fact that the airport has set a passenger record for international air traffic 88 months in a row is clear evidence of the strong growth. Norwegian flies to more than 70 international destinations from Sweden, and since 2014, five direct routes to the US have been launched,” said Elizabeth Axtelius, Aviation Business Director at Swedavia. 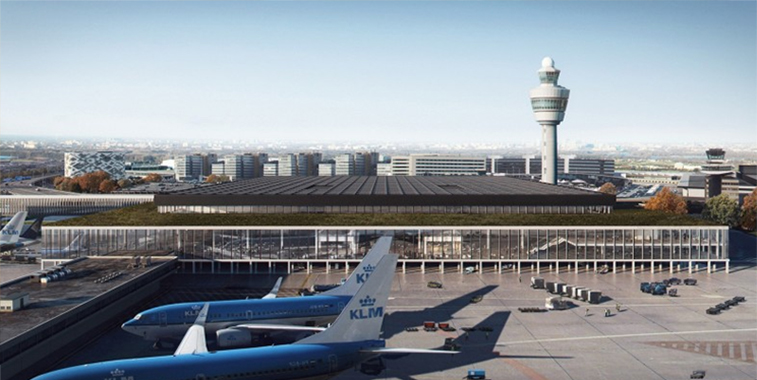 Amsterdam Airport Schiphol this week unveiled the design of the consortium KL AIR for its new terminal. The consortium represents KAAN Architecten in collaboration with ABT, Estudio Lamela and Ineco. The new terminal will open in 2023 and will allow 14 million more passengers to travel through the airport annually. Amsterdam was Europe’s third largest airport with regards to traffic numbers (after London Heathrow and Paris CDG) and also third busiest in terms of cargo volumes in 2016, welcoming 63.6 million passengers and processing 1.7 million tonnes of cargo.