Warsaw-Hanoi is “Skyscanner Unserved Route of the Week” with 220,000 searches; Vietnam Airlines’ next European operation?? 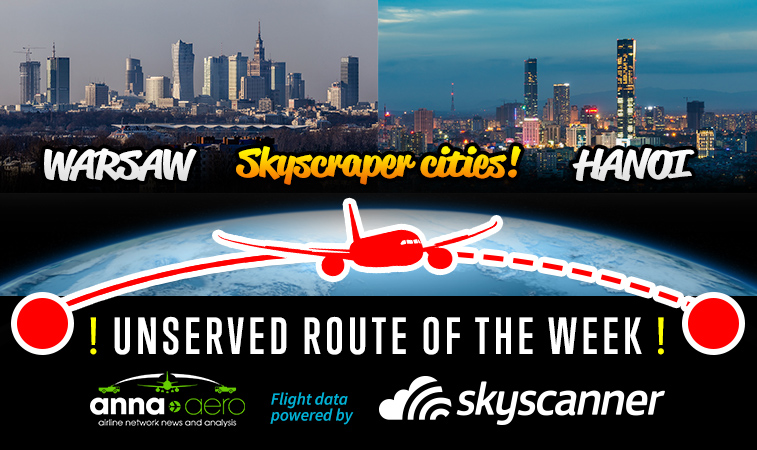 Almost as high as the skyscrapers that adorn the respective skylines of Warsaw and Hanoi is the demand for travel between the two capital cities. It’s Star Alliance vs SkyTeam in terms of which grouping is going to pick up this sizable opportunity – over 220,000 searches in the last 12 months – as its seems to be a straight fight between LOT Polish Airlines or Vietnam Airlines in terms of which one is going to pick up this dynamic sector.

With over 220,000 searches in the last year, a potential city pair from Warsaw to Hanoi has been identified as this week’s “Skyscanner-anna.aero Unserved Route of Week” – a powerful analysis based on aspirational data captured from the Skyscanner.net flight comparison site used by +60 million unique visitors per month. “The route has been served in the past by LOT Polish Airlines, starting in W10/11, but it was dropped after W11/12,” states Grzegorz Michorek, Commercial Bureau Deputy Director at Warsaw Chopin. “Not only is demand [to Hanoi] growing year-on-year, but it is growing very fast.” 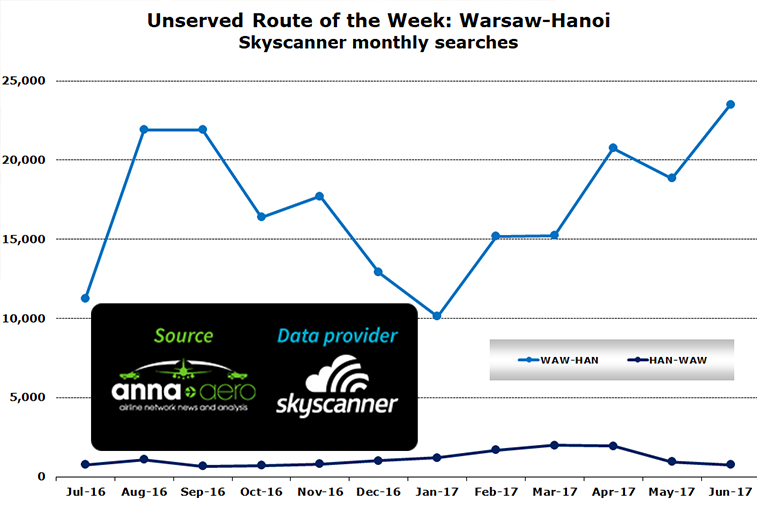 anna.aero would love LOT or Vietnam Airlines to leap onto this link

Skyscanner demand on this week’s unserved route shows a significant bias towards the Warsaw end of the city pair, with a 94/6 split, so on this basis we looked at potential carriers at the Polish origin first. For the purposes of this analysis, any potential operation from the city’s Modlin Airport has been disregarded, as it is presently only served by Irish ULCC Ryanair. According to OAG schedule data for the week commencing 18 September, the #1 carrier at Warsaw Chopin of its 41 serving airlines is unsurprisingly LOT (48% share of weekly seats). The Star Alliance carrier’s 70-strong non-stop route network does also currently feature three routes in Asia – namely a five times weekly service to Seoul Incheon, a four times weekly airport pair to Tokyo Narita and a three times weekly sector to Beijing. The fast-growing dynamic market to Hanoi is underserved at this time by European carriers, with Turkish Airlines (daily from Istanbul Atatürk) and Aeroflot (daily from Moscow Sheremetyevo) being the only carriers operating to the Vietnamese capital. So, while there maybe bigger unserved route opportunities to Asia from Chopin in terms of total demand – Bangkok, Shanghai or Hong Kong for example – perhaps a route to Hanoi represents the best opportunity for LOT to create a sustainable niche for itself that would draw in feed traffic from across Europe.

In terms of any other home-grown carrier to serve the capital connection between Poland and Vietnam, there are unlikely to be any other candidates. Chopin’s second largest airline (14% share of weekly seats), which offers a robust network of 41 destinations is Wizz Air, so even though the airport is the ULCC’s fourth largest operation – behind London Luton, Budapest and Bucharest – it is not very likely to be considering services to Hanoi in the short-term.

Considering the Hanoi end of the route, the airport’s #1 capacity provider is the national carrier Vietnam Airlines, controlling 47% of weekly seats. It should be noted that the airline already serves four airports non-stop in Europe from its second biggest base (Ho Chi Minh City is over 20,000 weekly seats larger than Hanoi) – Paris CDG (six times weekly), London Heathrow (four times weekly), Frankfurt (four times weekly) and Moscow Domodedovo (three times weekly). Additionally it operates to three of those airports direct from Ho Chi Minh City, with Frankfurt (four times weekly), Heathrow and CDG (both twice-weekly) being the beneficiaries. The airline’s last European route launch was some time ago, with the carrier initially serving London Gatwick from 2011, before moving its operation to Heathrow in April 2015. So Vietnam Airlines is well overdue to start a new service to the region, and perhaps with this Skyscanner information now being made public, this could well be the last piece of compelling data needed for the carrier to make that positive decision.

When looking at the previous year of search data, the busiest month for potential traffic flows (for both directions on the route combined) is June 2017, with over 24,000 searches, nearly 13,000 higher than the lowest monthly figure, which was recorded in January 2016 (11,300 searches). The seasonality profile of this search data is far less extreme than the last Unserved Route of the Week (Edinburgh to Dubai) with the low-month traffic representing 47% of the highest month. According to OAG Traffic Analyser, because there is no direct service, the top three connecting options chosen by those passengers who did book travel between Warsaw and Hanoi in the last year indicates that the majority of connecting travellers used Doha (34%), Sheremetyevo (33%) and Dubai (16%). In total, transfer passengers used 13 different airports in the past 12 months to connect between the Polish and Vietnamese capitals.

Indeed, an O&D that is not served by a non-stop flight will typically display a low purchase rate and low traffic. In this instance Skyscanner’s Travel Insight indicates a monthly average of 5.3% for the Warsaw to Hanoi route (see graph below). Therefore, if there was a Warsaw to Hanoi route, and if bookings performed in line with the “Skyscanner market average” for direct services at both airports (7.4%), the airline operating this route could immediately expect an improved purchase rate of 40%, without any increased marketing spend. However, with over 220,000 annual searches in the past year, a three times weekly service should be immediately viable for the airline selecting to start this potential city pair. 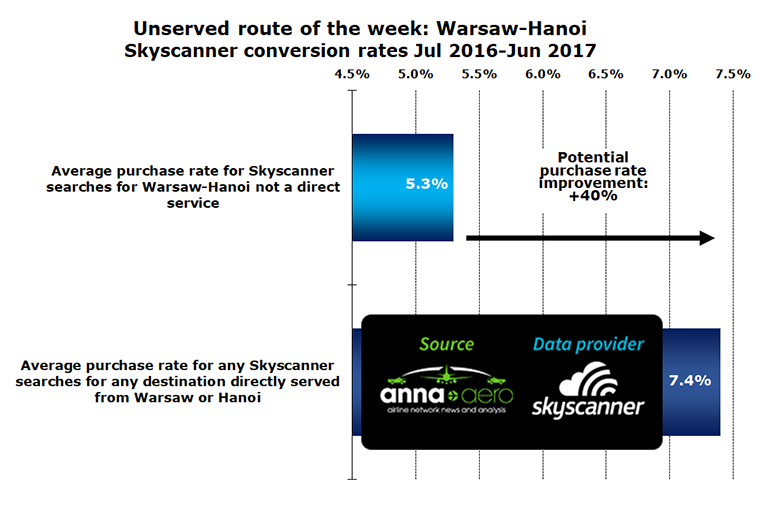