Norwegian begins flights between London Gatwick and Singapore – anna.aero joins carrier to celebrate its first Asian route from the UK 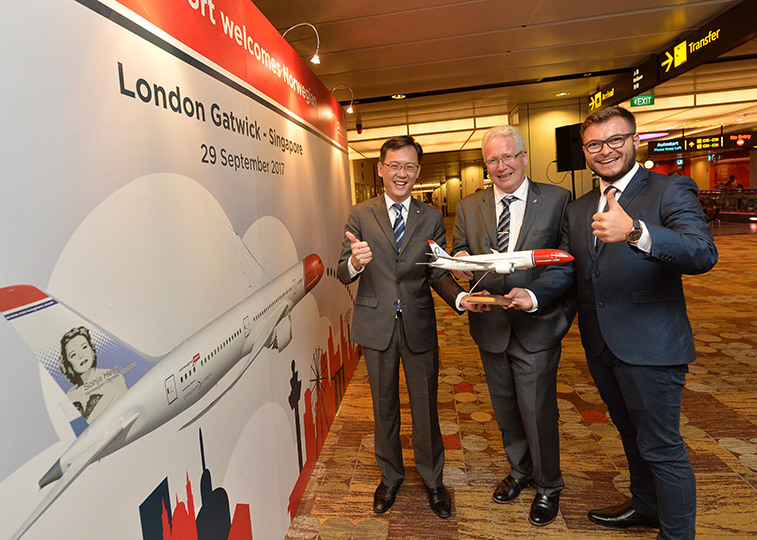 Norwegian on 28 September launched its first Asian route from London Gatwick, a 10,885-kilometre link to Singapore. The carrier will connect its UK capital hub with four weekly flights to the Asian city, with Singapore becoming the airline’s second destination in Asia after Bangkok Suvarnabhumi, with Norwegian already linking the Thai capital to its Copenhagen, Oslo Gardermoen and Stockholm Arlanda bases. The new 12 hour 45 minute flight from Gatwick to Singapore is now the world’s longest route operated by a low-cost airline. Bjørn Kjos, CEO of Norwegian said of the new city pair: “We have brought a taste of Singapore to Gatwick to mark the expansion of our high quality long-haul flights from the UK to Asia for the first time. I’m delighted to build upon our popular US flights and give leisure and business customers more affordable access to Singapore and the Asia-Pacific like never before.”

Direct traffic between the UK and Singapore up 1.9%

Between January and August this year, 885,781 passengers have travelled non-stop between the UK and Singapore according to UK CAA statistics, up 1.9% from the 869,619 that flew directly between the two nations in the same eight months of 2016. 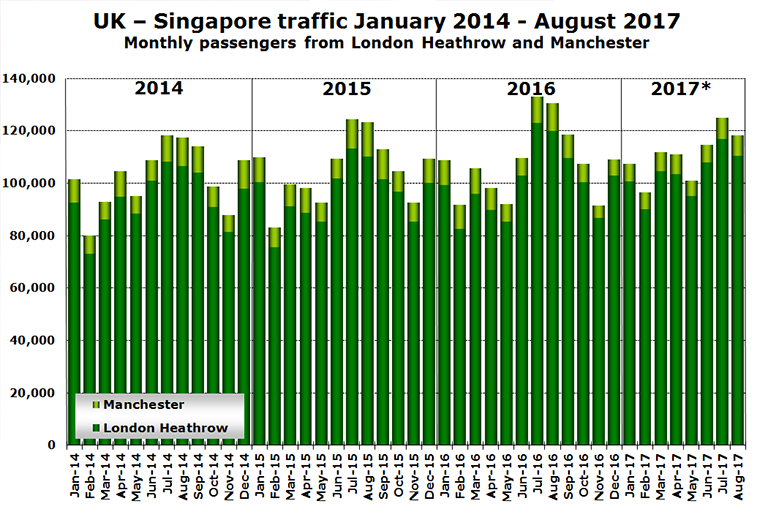 For all of 2016, the UK CAA states that 1,296,239 flew between the two countries directly, up 2.9% on the total of 2015, a year which saw 1,259,190 non-stop passengers. This was another year of growth, with 2015 traffic up 2.5% on the total of 1,228,087 seen in 2014. So Norwegian is clearly entering a growing, sustainable market. However, competition will increase from next summer for Norwegian when Qantas returns to the London-Singapore market as it moves its stopover from Dubai to the Asian city on 25 March. 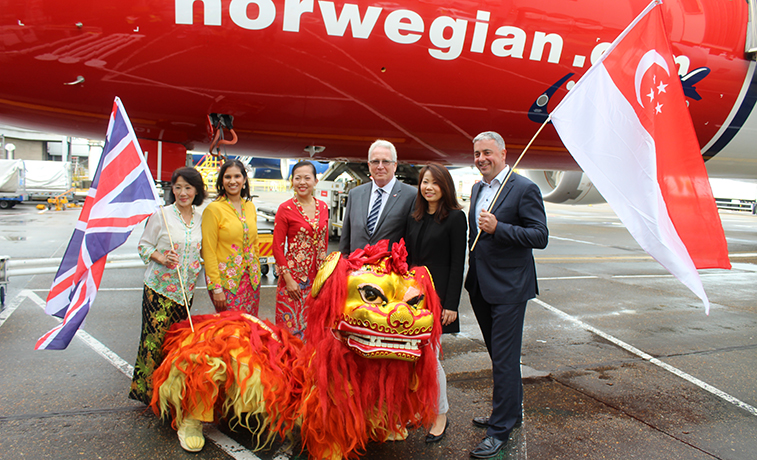 After the official photos on the apron took place, Ceder, Yen Nee and Wingate headed to the departure gate to greet passengers who were booked on the inaugural flight and to give speeches. Wingate kick-started proceedings by saying: “Norwegian has raised the bar by introducing the world’s longest low-cost long-haul route between Gatwick and Singapore. Singapore is one of the world’s premier destinations and is a significant addition to Gatwick’s 60-strong long-haul route network. Services in both directions are likely to be very popular, both with tourists and business travellers flying between two of the world’s top financial centres. It’s such an exciting time for Gatwick as airlines like Norwegian continue the low-cost long-haul revolution and I’m already looking forward to hearing about the next new destination.” Once speeches had taken place, a Singapore dragon entertained passengers as the event’s VIPs prepared for the cake cutting ceremony. Along with entertainment, passengers were also treated at the gate to Singapore Sling cocktails, Prosecco, mocktails and chicken satays. 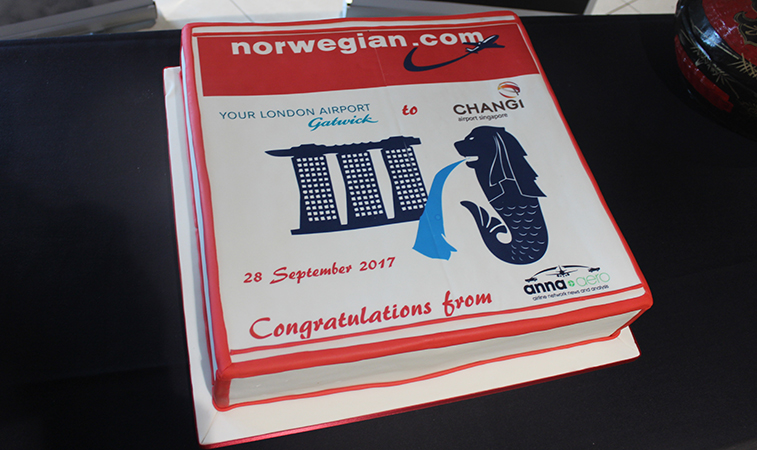 anna.aero had the honour of baking the cake for Norwegian’s first Asian route from London Gatwick. The cake was filled with a vanilla sponge with cream and jam layers, while a chocolate coating was also inside between the icing and the sponge. anna.aero can happily confirm that the cake went down very well with the inaugural passengers. Seen showing the anna.aero-commissioned cake to Ceder is Jonathan Ford, Assistant Editor of anna.aero. Once both had posed for a photo with the cake, Ceder joined Yen Nee and Wingate to carry out the cutting. With the main festivities now complete in Gatwick, it was time for passengers to board the inaugural flight to Singapore, including Ceder and Ford. 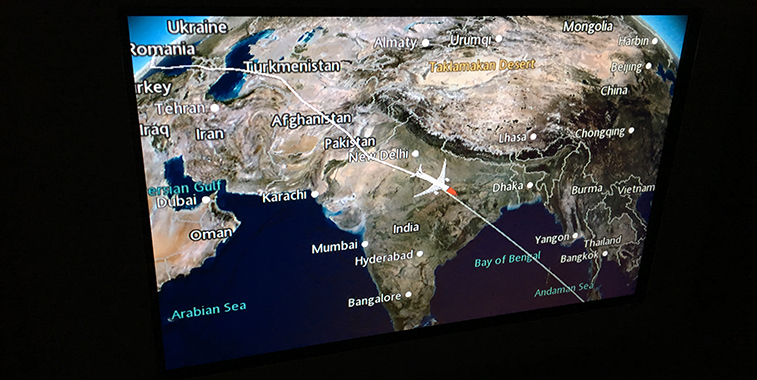 At the halfway stage of Norwegian’s first flight to Singapore we reached India, finally showing visually that Norwegian has officially entered the Asian market from Gatwick. 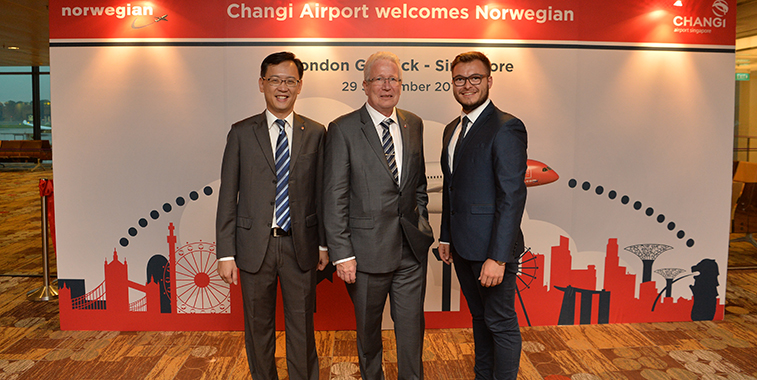 Touchdown in Singapore. Some 300+ passengers made the inaugural journey between Gatwick and Singapore, with two of those passengers being Ceder and Ford. Greeting them off the flight was Lim Ching Kiat, MD Air Hub Development, Changi Airport Group. Norwegian’s first flight landed in Singapore 15 minutes ahead of schedule. 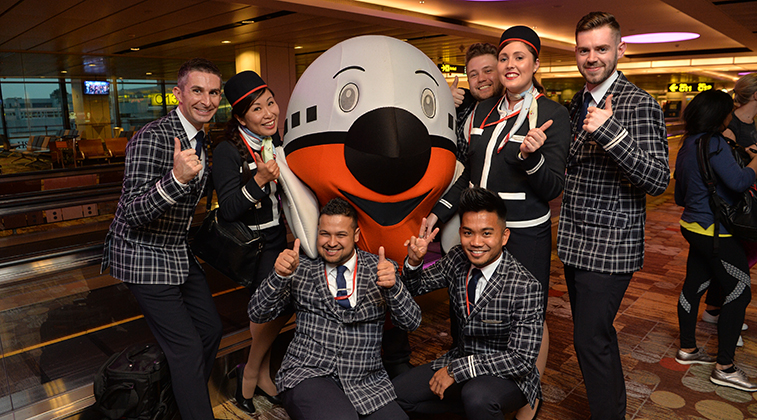 While Ceder and Ford were greeted by Ching Kiat, Norwegian’s crew which had operated the first flight into Singapore were greeted by the airport’s mascot Max the aircraft. The first event to take place in Singapore was the ribbon cutting ceremony, with Ching Kiat and Ceder being joined by Yacoob Piperdi, EVP Gateway Services, SATS, to carry out the first flight duty to officially declare Norwegian’s new route to Singapore open. 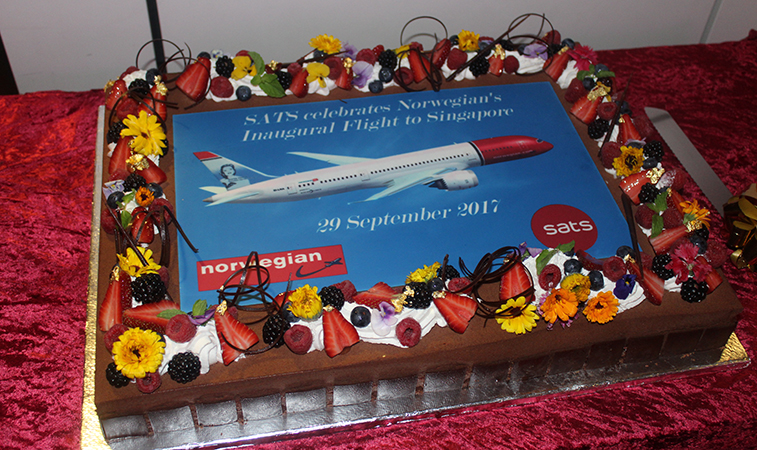 Time for another slice of cake, this time 10,558 kilometres away in Singapore. The Asian airport decided to go for a chocolate mousse-flavoured cake to welcome its newest European carrier. 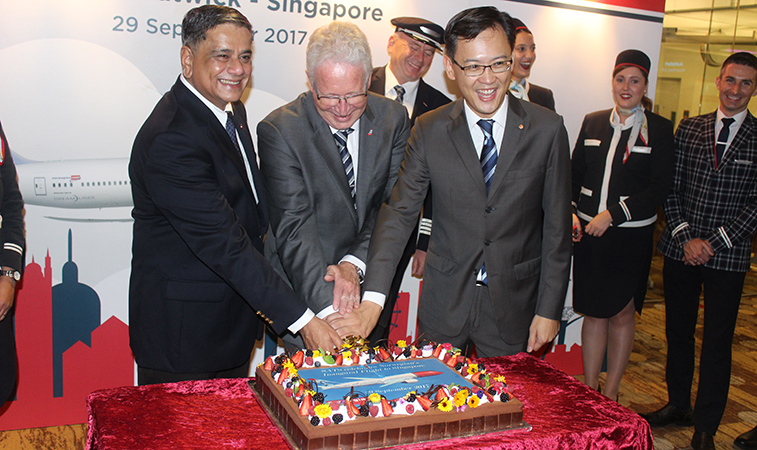 Cutting the cake in Singapore are Piperdi, Ceder and Ching Kiat. Once the cake cutting was completed, it was then taken away to be prepared for the event’s delegation and passengers as the three VIPs got ready for the gift giving exchange. As part of the gift giving exchange, Ceder presented the airport with a Norwegian model 787-9, while Ching Kiat presented the airline with a commemorative plaque in honour of the carrier’s first service to Singapore. Piperdi presented a piece of artwork to Norwegian on behalf of SATS. 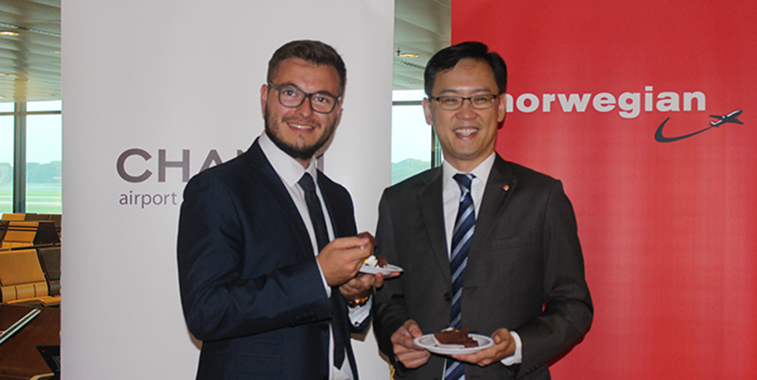 Once the cake had been cut Ford then joined Ching Kit in having a slice of the chocolate concoction. anna.aero would like to thank Singapore and Gatwick airports for allowing it to take part in festivities, and particularly to Norwegian which invited anna.aero to take part in the celebrations for this new route. We wish Norwegian the best of luck in its new venture.