The Monarch Airlines failure – which airports are most affected? 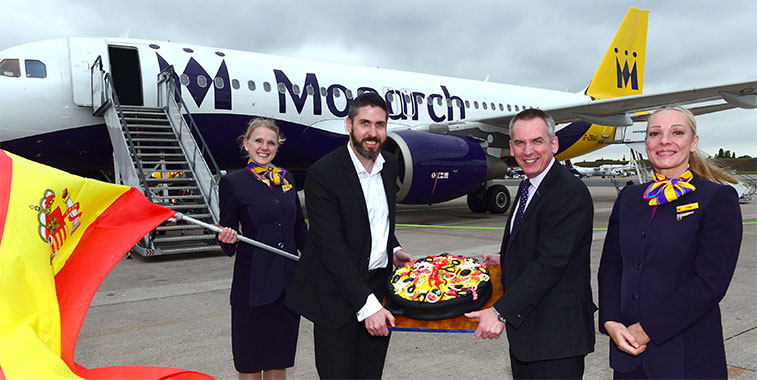 More regal times. Monarch Airlines had continued to add routes over S17 – including the launch of Birmingham to Valencia in June this year. The airline’s CEO Andrew Swaffield blamed the terror attacks in Egypt and Tunisia, as well as ongoing difficulties in the Turkish market, as the root cause for the airline’s demise.

Monarch Airlines, which celebrated its 50th anniversary earlier this year, has become the latest of aviation’s esteemed brands to fall into administration. In a summer of industry news dominated by the predicaments of airberlin and Alitalia, it is Monarch, the UK’s eighth largest airline (based on OAG schedule data for w/c 2 October) – behind British Airways, easyJet, Ryanair, Flybe, Thomson Airways, Jet2.com and Thomas Cook Airlines – that lost its survival battle overnight after last ditch talks to save the airline failed. The carrier currently operates a fleet of 10 A320s, 25 A321s, and a single 737-800. 110,000 customers of the airline (including anna.aero Editor Marc Watkins’ parents on holiday in Tenerife) will have to be repatriated back to the UK over the coming days.

It was only just a year ago that the airline had its last stay of execution, with executives from several UK airports having to dash back home during World Routes in Chengdu. Indeed, industry colleagues from data supplier RDC, as well as anna.aero’s Editor Marc Watkins can count themselves lucky that the carrier’s demise happened this week and not last week, as they used Monarch to return to Birmingham from this year’s World Routes in Barcelona.

Birmingham will feel the loss of royalty the most

Monarch was operating from five UK bases, but with three – London Gatwick, Birmingham and Manchester – significantly larger than the rest. The airline did have another base, at East Midlands until April 2015, when this was closed as part of a previous round of cost-cutting measures. While the airline’s Gatwick operation was its biggest, it is perhaps more telling to investigate the share the carrier had at each airport in order to gauge the full impact of its demise. Dominated by easyJet and British Airways, Monarch was the fifth largest carrier at Gatwick, offering just 5.2% of the London airport’s total weekly seats of over 540,000. In fact,this is the lowest market capacity share that airline has across its five UK bases. By contrast, the defunct carrier maintained more than a 14% stake in Birmingham’s weekly capacity, the largest share of all the operations. As a result, the airline’s failure will have a more wide-ranging impact at the UK Midlands airport than perhaps anywhere else. 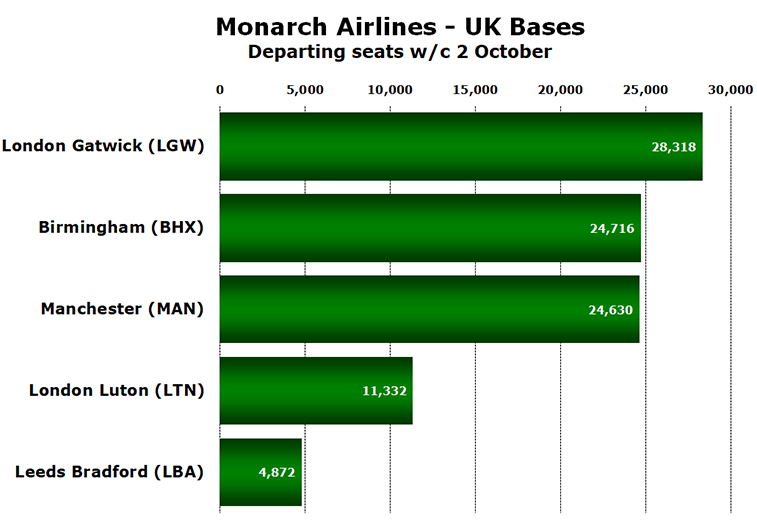 At Monarch’s third largest UK base, Manchester, the carrier is the airport’s seventh largest customer (its lowest rank across the five airports), with a 7.0% share in its seven-day capacity. Returning to the London market, one of the airline’s smaller operations is at Luton, and its size there is reflected by its potential impact to the business, with Monarch being the fourth largest partner, but only holding a 5.7% share of weekly seats. Finally at Leeds Bradford, where the failed carrier was its third largest operator behind Jet2.com and Ryanair, the loss of Monarch will be sharp, as the airline commanded 9.2% of weekly capacity from the UK regional airport. Spare a thought for Gibraltar  where Monarch is the airport’s largest customer of four serving airlines (easyJet, BA and Royal Air Maroc are the others), providing the facility with 39% of its weekly seats. 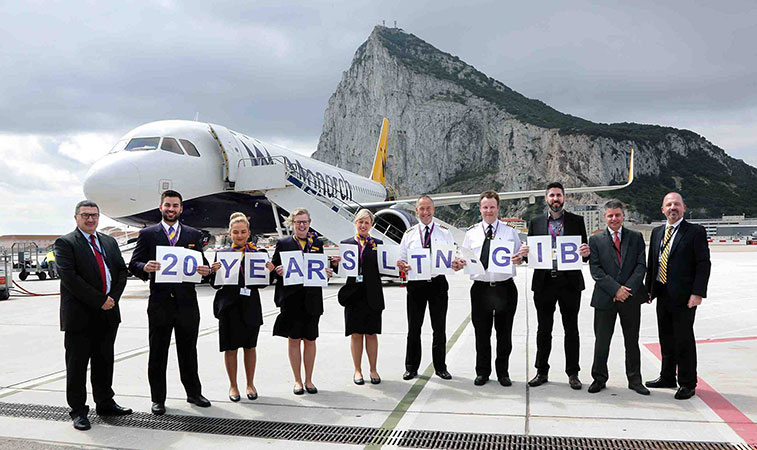 Earlier this year Monarch Airlines celebrated 20 years of service from London Luton to Gibraltar. The UK territory is perhaps likely to face the most impact from the demise of the airline, as nearly 40% of its weekly capacity is provided by the defunct carrier.

Up until its demise overnight, Monarch served 11 overseas country markets – Croatia, Cyprus, France, Gibraltar, Greece, Israel, Italy, Portugal, Spain, Sweden and Turkey. However, it is in Spain where the loss of Monarch will be most stark of the overseas markets. After the home-base nation of the UK, Spain accounts for 28% of the carrier’s total capacity, with 12 airports in the country being served. 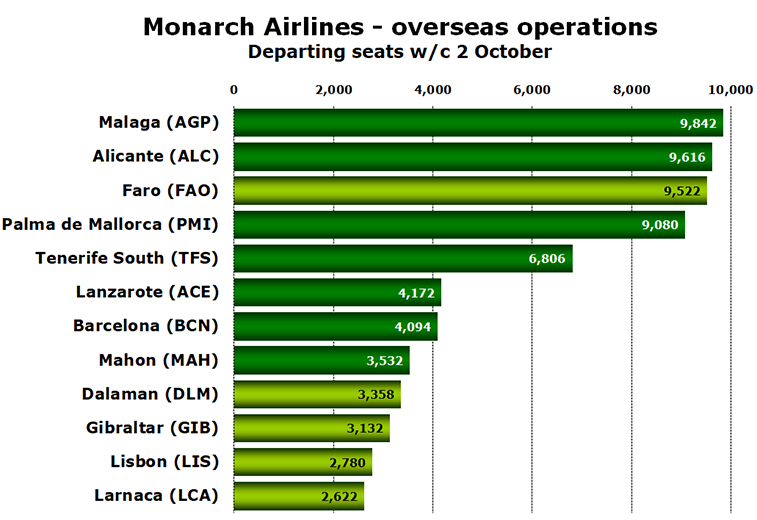 With seven of the top 12 airports being in Spain, the rest (highlighted in light green) of the top 12 were spread across Portugal, Turkey, Gibraltar and Cyprus. The airline was flying to a total of 33 destinations when referring to OAG schedule data for this week. By contrast to the five UK bases, as expected the impact overseas will be less pronounced. At Malaga, Monarch is the Spanish airport’s fifth largest carrier, with a 4.0% share of over 240,000 weekly seats. In Alicante the situation is a little more worse, as despite being the airport’s sixth largest airline, Monarch represented 5.7% of its seven-day capacity.

Capacity void will not stay empty for long

While the loss of Monarch is a sad end to a well-respected brand in the industry, and upsetting for those staff and passengers directly involved, in the medium-term most of the effected airports will eventually recover. The loss of bmibaby in the UK market, and indeed Spanair in Spain, both in 2012, were just as tumultuous at the time, but since then the individual markets and airports have recovered, and capacity voids filled. No doubt at the effected airports, discussions with the likes of easyJet, Jet2.com, Norwegian and Ryanair have already begun, and pencils will have been sharpened to encourage a quick response to minimise traffic impacts. And when the inevitable route launches take place, anna.aero will be keeping you posted. 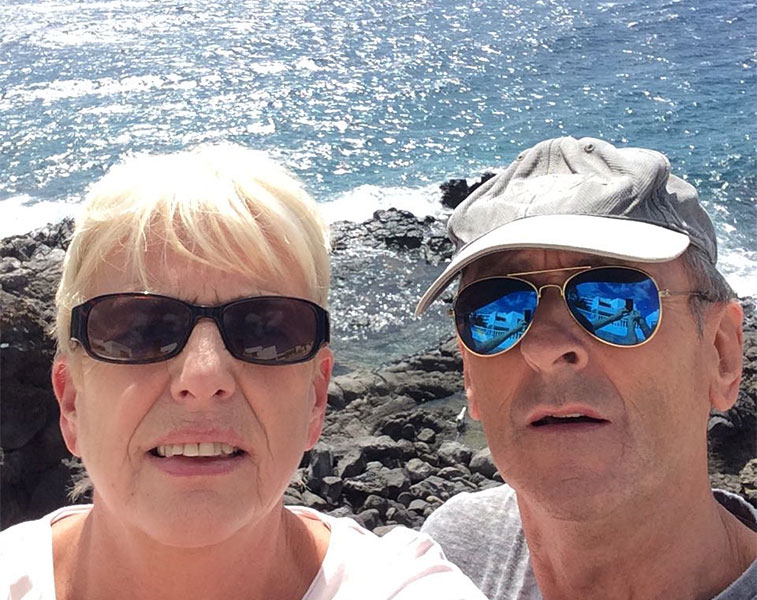 Stranded in paradise (for a week at least). Two of the 110,000 passengers which have been left in limbo by Monarch Airlines’ failure are the parents of anna.aero’s Editor Marc Watkins. The retirees left for Tenerife from Birmingham less than 24 hours before the carrier’s entry into administration and will be flown home by a number of third-party airlines drafted in to repatriate travellers abroad back to the UK.