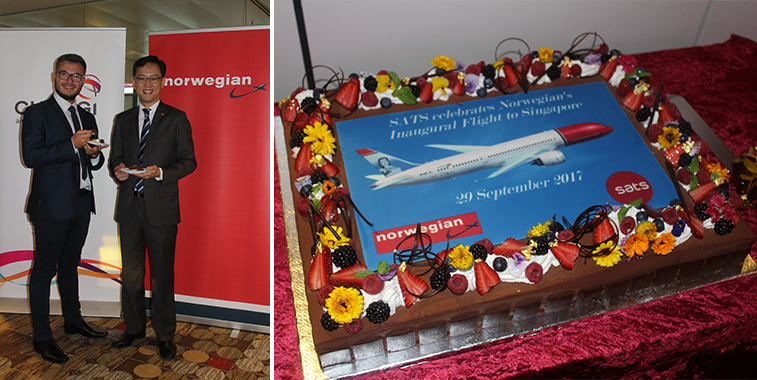 anna.aero’s Assistant Editor Jonathan Ford recently travelled to Singapore Changi on Norwegian’s inaugural service from London Gatwick, a route that was welcomed at the Asian hub with much fanfare. While in Singapore he met (over a slice of route launch cake) with the airport’s MD Air Hub Development, Lim Ching Kiat, who discussed the recent developments at the airport, including passenger traffic being up 5.7% for the first eight months of this year to over 41 million passengers.

Singapore Changi Airport is one of Asia’s leading hubs, with it currently being the continent’s seventh largest airport when measured by annual seat capacity. Using this measurement on a global scale, the airport is now the world’s 15th largest, sitting just behind Guangzhou in 14th, but ahead of Amsterdam in 16th. The airport is also now part of the world’s longest non-stop LCC route, with Norwegian last week launching non-stop flights to the Asian hub from London Gatwick, an inaugural service which anna.aero was on, and even made a route launch cake for.

Should pass 60 million threshold in 2017

Changi in 2016 handled just under 58.7 million passengers, up 5.9% on the total it welcomed in the year before. So far during the first eight months of 2017 the airport is reporting a similar rate of growth, with traffic between January and August up 5.7% when compared to the same period of last year. If this level of growth is maintained throughout the remainder of 2017, then Changi is anticipating to handle around 62.04 million passengers this year. This means that the airport can expect to process 3.34 million more passengers during 2017 when compared to 2016. 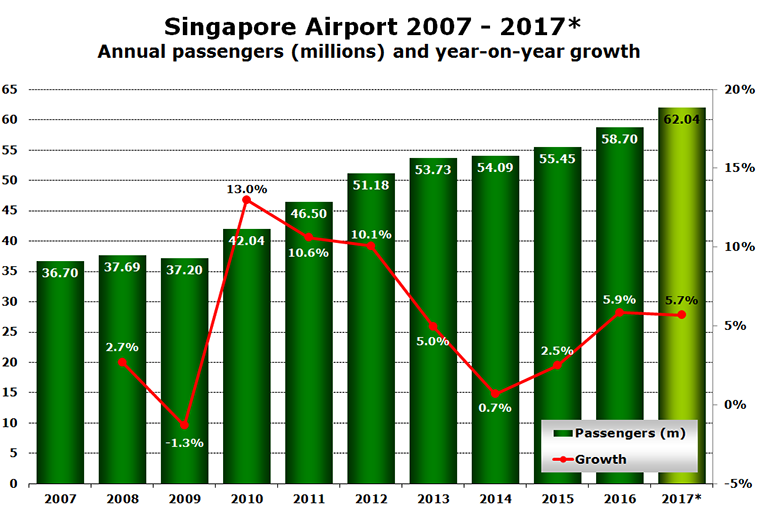 Between 2010 and 2016, Changi has achieved an average year-on-year increase in traffic of 6.8%, with passenger growth during that time fluctuating between 13% (2010) and 0.7% (2014). During the past two years (2015 and 2016) the rise in traffic from Singapore has been relatively consistent, with only two months during the 24-month period (January 2015 and August 2016) seeing dips in monthly passenger throughput. So far this year the average increase in monthly traffic is 5.7%. 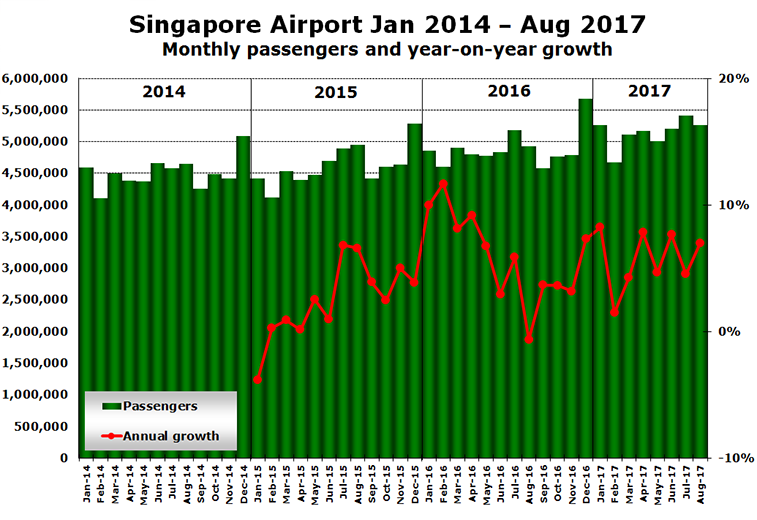 Last year, Singapore encountered an average monthly increase in traffic of 6.0%, with the biggest climb coming in February 2016 when traffic grew by nearly 12%, while in August last year it fell 0.6% versus the total of August 2015. This year so far the growth has ranged from an 8.2% rise in January to a 1.5% upswing in February. This means that the growth being seen in 2017 so far is more consistent than that encountered in 2016, highlighting that growth patterns at Changi are becoming more stable.

With LCC Scoot having completed its merger with Tigerair Singapore on 25 July, the carrier has strengthened its position against Singapore Airlines, with the former growing its market share at Changi to 12% this summer. This compares to just the 4.2% share it had in S16, while the Star Alliance member holds a 30% share of seats at its home airport, down one percentage point from last summer. It should be noted that in S16 Tigerair Singapore had a 7.9% share of seats, so when combined with Scoot the merged carrier now occupies just over 12% of seats. 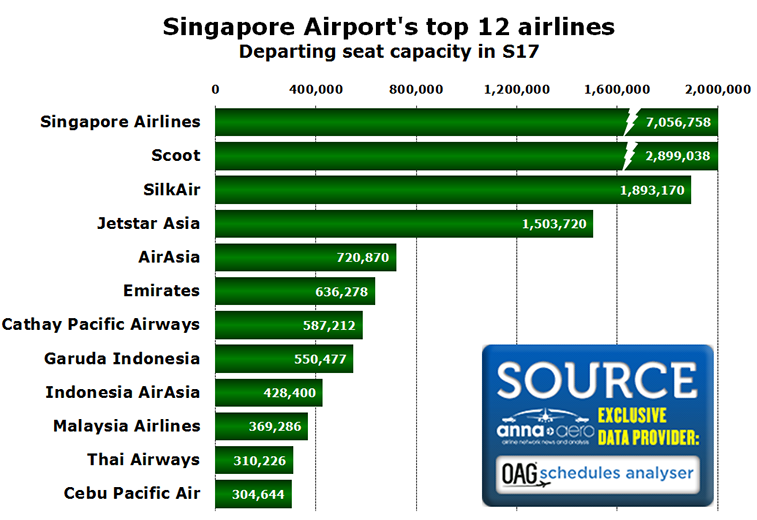 While the airport’s two leading carriers control 39% of capacity, other airlines at the Asian hub are showing strong developments. Among the carriers reporting impressive growth at Changi are Air India Express and IndiGo. The former of the two Indian airlines is reporting an increase in capacity for S17 to Singapore of 176%, while the latter is highlighting a 147% rise in seats. One factor that has contributed to Air India Express’ increased presence is due to its recent launch of service between Madurai and Singapore, with this now being the carrier’s fourth route to the world’s 15th largest airport as measured by seats. In total Singapore is now connected to 16 destinations in India, served by a total of eight carriers on 241 weekly flights. While existing airlines have advanced their footholds at Changi, that has not stopped new carriers from entering the market, with two new entrants this summer being Norwegian (London Gatwick) and Ethiopian Airlines (Addis Ababa).

Jakarta is the number one route from Singapore, with over 1.65 million departing seats being offered to the Indonesian capital this summer. The popularity of the route means that the city pairing occupies 7.0% of all seats departing Changi, while Kuala Lumpur, the second largest route from Singapore, has a 6.9% share of all seats. Of Changi’s top 12 routes, only two (highlighted in light green) are outside of Asia, with both – Sydney and Melbourne – being destinations in Australia. 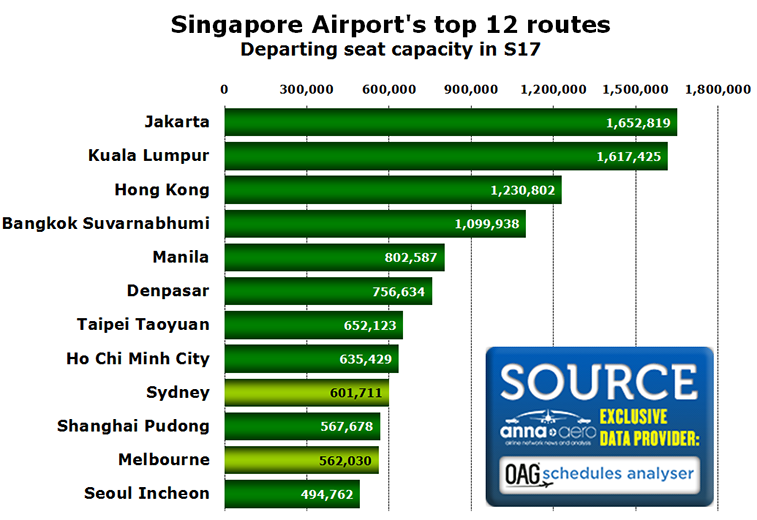 anna.aero’s Assistant Editor Jonathan Ford recently travelled to Singapore on Norwegian’s inaugural service from London Gatwick, meeting with the airport’s MD Air Hub Development, Lim Ching Kiat, where the two had a quick chat about recent route announcements over some route launch cake. “One of the biggest route highlights heading into winter is United Airlines offering direct flights from Los Angeles,” comments Ching Kiat. “Last year they opened direct flights from San Francisco so it is great to see that it is adding to its Singapore operation.” Along with the expansion by United, Changi has also recently welcomed the news that Qantas will be returning with A380 services from March, with the oneworld member reintroducing its Sydney/Melbourne–Singapore–London Heathrow route which currently operates via Dubai. However expansion to the UK capital is not the only growth on the horizon for Europe. Lufthansa has also confirmed it will be expanding its operations at Singapore with the launch of direct flights from Munich starting on 27 March 2018, a link that the Star Alliance member will offer on its A350s. It should be noted though that Singapore Airlines already operates services to the German city. When referring to OAG schedules, Changi is connected to 142 non-stop destinations this summer.

On 31 October Changi will be increasing its capacity by opening its brand new Terminal 4, a building that was first announced to be built on 1 March 2012. The new terminal will serve both full-service and LCCs, and have an annual passenger capacity of 16 million. This will bring Changi’s total passenger capacity to 82 million per annum. 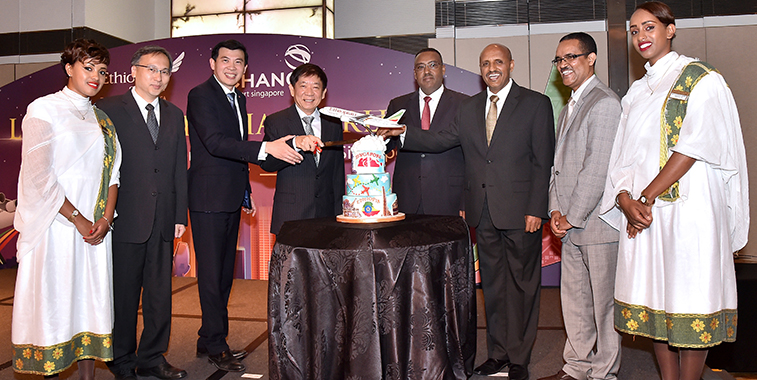