Turin-Prague is “Skyscanner Unserved Route of the Week” with 75,000 searches; Blue Air to ‘Czech-out’ this connection?? 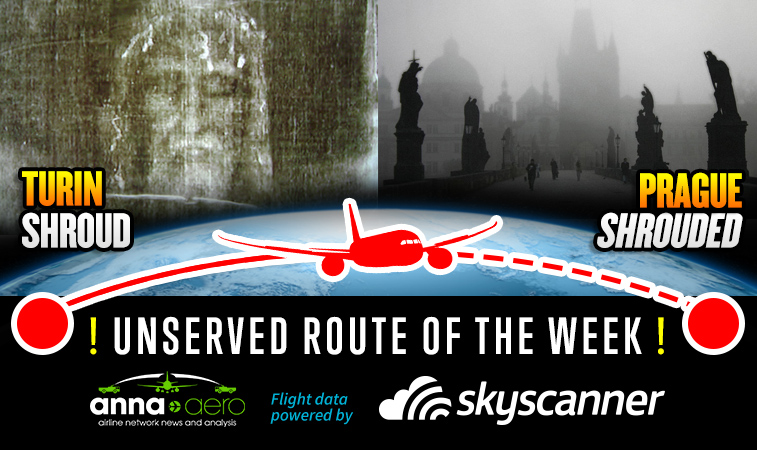 Blue Air’s next new route decision from its Turin base is no longer ‘shrouded in mystery’ thanks to the help of Skyscanner’s Travel Insight software. Over the last year, it has identified that over 75,000 travellers want to get from the capital city of the Piedmont region of Northern Italy to Prague, the Czech Republic’s capital and one of the most beautiful cities in Europe – even on a foggy day.

With over 75,000 searches in the last 12 months, a potential city pair from Turin to Prague has been identified as this week’s “Skyscanner-anna.aero Unserved Route of Week” – a powerful analysis based on aspirational data captured from the Skyscanner.net flight comparison site used by +60 million unique visitors per month. 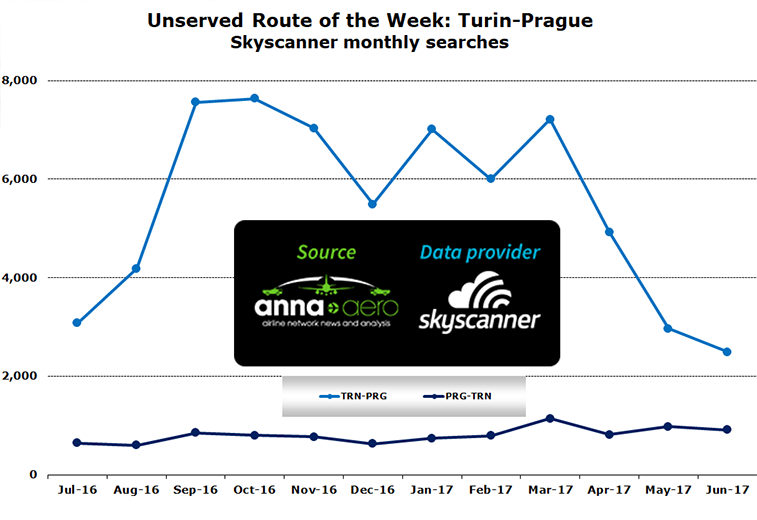 anna.aero suggests Blue Air or Czech Airlines should check out this connection

Skyscanner demand on this week’s unserved route shows a significant bias towards the Turin end of the city pair, with a 87/13 split, so on this basis we looked at potential carriers at the Italian origin first. According to OAG schedule data for the week commencing 29 September, the #1 carrier at Turin of its 21 serving airlines is Blue Air (27% share of weekly seats). The Romanian hybrid carrier’s non-stop route network from Turin of 19 destinations does currently feature eight international routes (excluding the 11 domestic and Romanian sectors it flies) – namely Madrid, Seville, Malaga, London Luton, Copenhagen, Lisbon, Palma de Mallorca and Berlin Tegel. Expanding its international links from the Italian city is clearly on the airline’s agenda, as it plans to commence a weekly service from Turin to Stockholm Arlanda from 20 January (until end-March). Although it does not serve the Czech capital from any of its existing bases, with the Skyscanner data on this city pair now being made public, perhaps Prague will be a new destination on Blue Air’s network map in 2018.

Turin’s second largest carrier is Ryanair (20% share of weekly capacity), and with 10 direct destinations, it is the ULCC’s 14th largest Italian operation of the 25 airports it presently flies to in the country. Unlike its rival to serve this sector, the Irish ULCC does at least currently operate to Prague, with flights from London Stansted (15 times weekly), Brussels Charleroi (nine), Dublin, Milan Bergamo, Rome Ciampino (all daily), Liverpool (four) and Trapani (twice-weekly). So putting recent crewing issues aside, both LCC’s could easily be developing a coherent business plan to make this route work from the Italian airport.

Contemplating the Prague end of the route, the airport’s #1 capacity provider is the national carrier Czech Airlines, controlling 18% of weekly seats. It should be noted that the airline already serves six Italian airports from its biggest base – Milan Malpensa (11 times weekly), Rome Fiumicino (eight times weekly), Venice Marco Polo, Bologna (both daily), Pisa (three) and Verona (weekly). According to OAG schedule data, the city pair was last served by now defunct SkyEurope in S07, so this opportunity is well-overdue for a comeback, and hopefully Czech Airlines will introduce a Turin sector as its seventh Italian route in the near future. 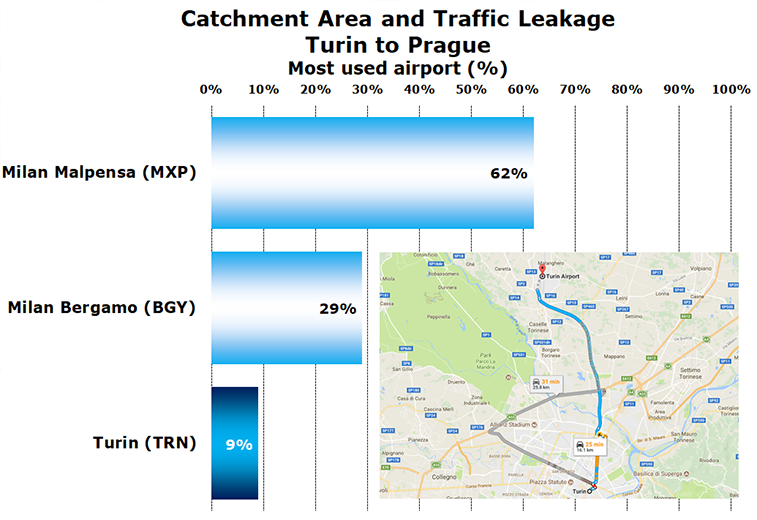 Faical Allou Skyscanner’s Business Development Manager says: “Turin serves 9% of the traffic from the catchment (50km around the airport) going to Prague. With better service, such as a non-stop operation, the traffic could grow by a huge 1022%.”

When looking at the previous 12 months of search data, the busiest month for potential traffic flows (for both directions on the route combined) is October 2016, with over 8,400 searches, over 5,000 higher than the lowest monthly figure, which was recorded in June 2017 (3,400 searches). The seasonality profile of this search data is more extreme than the last Unserved Route of the Week (Warsaw to Hanoi) with the low-month traffic representing 40% of the highest month. According to OAG Traffic Analyser, because there is no direct service, the top three connecting options chosen by those passengers who did book travel between Turin and Prague in the last year indicates that the majority of connecting travellers used Munich (38%), Frankfurt (37%) and Rome Fiumicino (11%). When looking at the transfer passenger flows in the opposite direction, the same three airports are still top, although Frankfurt (43%) is ahead of Munich this time (28%), with Fiumicino remaining in third spot (11%).

Indeed, an O&D that is not served by a non-stop flight will typically display a low purchase rate and low traffic. In this instance Skyscanner’s Travel Insight indicates a monthly average of 2.8% for the Turin to Prague route (see graph below). Therefore, if there was a Turin to Prague route, and if bookings performed in line with the “Skyscanner market average” for direct services at both airports (7.6%), the airline operating this route could immediately expect an improved purchase rate of 177%, without any increased marketing spend. However, with over 75,000 annual searches in the past year, a two or three times weekly service should be immediately viable for the airline selecting to start this potential city pair. 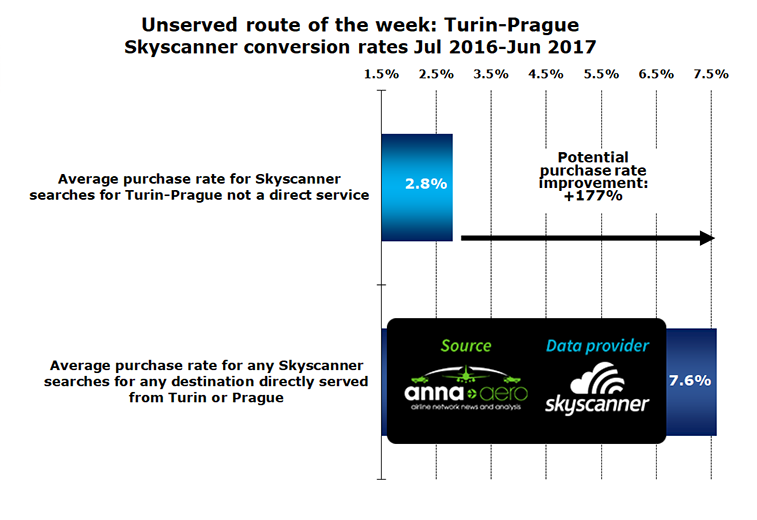