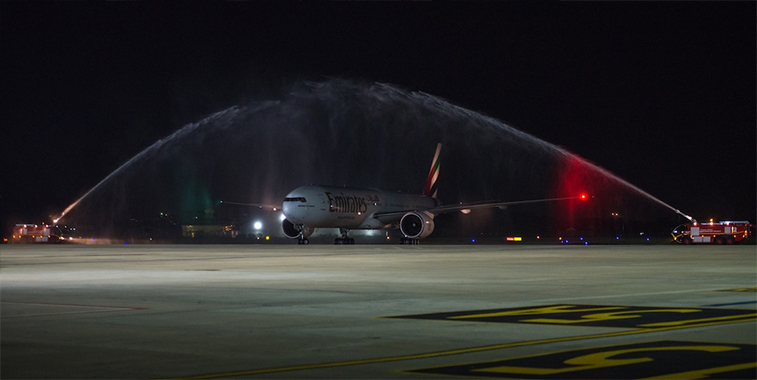 Phnom Penh became the latest Emirates destination on 1 July when the MEB3 carrier launched flights to its first Cambodian destination via its existing Yangon service. The airport in 2016 welcomed just under 3.39 million passengers, up by 10% when compared to 2015. For Q1 2017, traffic is up by over 17% when analysed against Q1 2016 data, with over 1.01 million people travelling through the airport during January, February and March.

Phnom Penh is Cambodia’s second largest airport after Siem Reap, with it hosting just under 3.39 million passengers in 2016. The nation’s busiest international gateway at Siem Reap handled a little below 3.48 million passengers last year, so the capital city airport witnessed only 89,747 less passengers than the facility serving the gateway to the Angkor region during 2016.

Since 2012 Phnom Penh has encountered double-digit growth with regards to passenger traffic, resulting in the airport’s annual throughput doubling between 2010 and 2016 from 1.67 million passengers to just under 3.39 million last year. During the past 10 years only one year has seen traffic fall at Phnom Penh, with numbers dropping 6.1% in 2009. Overall during the past decade the average annual increase in traffic from Phnom Penh is 8.9%. Nonetheless, between 2012 and 2016 the average is 13%, showing that growth towards the second half of the last 10 years has advanced at an even faster rate. 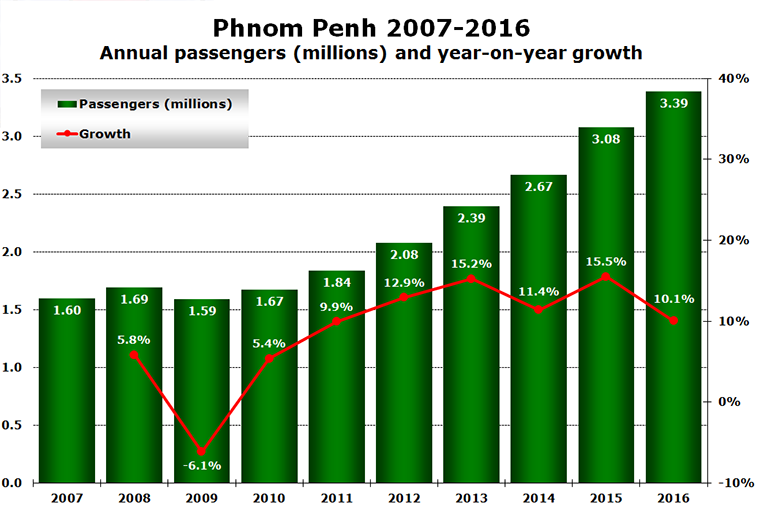 As stated, traffic at Phnom Penh is currently growing much faster than it has in previous years when looking at the airport’s monthly statistics. A glance over the latest data to be released by Cambodia Airports (January-March 2017) shows that during Q1 2017 the airport recorded an average monthly increase in passengers of over 17% – this compares to a monthly average of 10% in Q1 2016 and the 14% posted for Q1 2015, again proving that growth is presently advancing at a swifter pace at the airport. 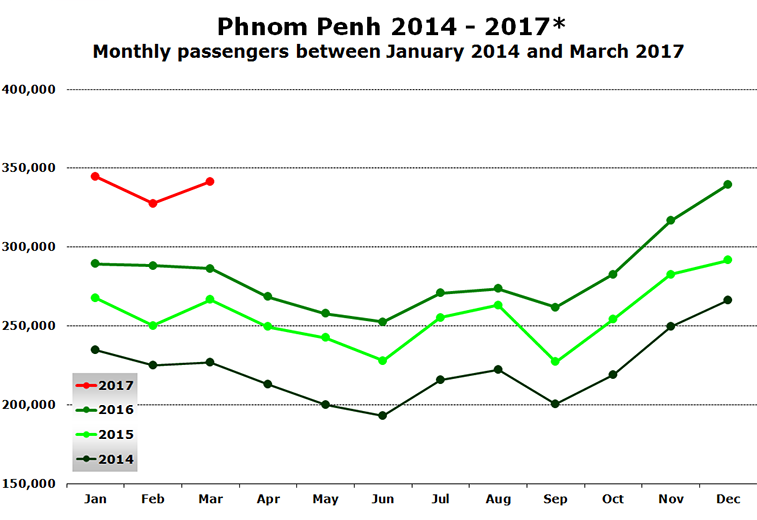 When we breakdown the passenger traffic at Phnom Penh by market, it becomes clear that it is the international sector that is driving the majority of growth. In January this year passengers on overseas services increased by 22%, while February encountered a 17% increase and March 20% respectively. While the domestic market did see double-digit growth in March (14%), in January the sector grew by only 5.1%, while in the second month of this year the sector witnessed traffic fall by 9.2%, indicating that the home market is not as stable as the international sector. As a result of the domestic market’s performance in February, for Q1 2017 the sector only witnessed traffic increase by 2.6%, while the international market produced a growth figure of just under 20%. A closer look at the statistics also shows that during Q1 this year transit traffic fell by 2.1% to 8,662 passengers, however the sector accounted for only 0.9% of Phnom Penh’s traffic during the first three months of 2017.

Six new airlines during past year

There are six new airlines operating from Phnom Penh this summer that were not operating in S16, with the leading new carrier being home-based JC International Airlines (highlighted in red below). Founded in 2014, the start-up commenced operations at the beginning of S17, with the airline operating A320s. When taking a closer look at OAG schedules, it would appear that JC International is presently operating four aircraft. According to the carrier’s booking engine, flights are bookable to Bangkok Don Mueang, Kuala Lumpur, Siem Reap, Sihanoukville and Taipei Taoyuan from Phnom Penh. 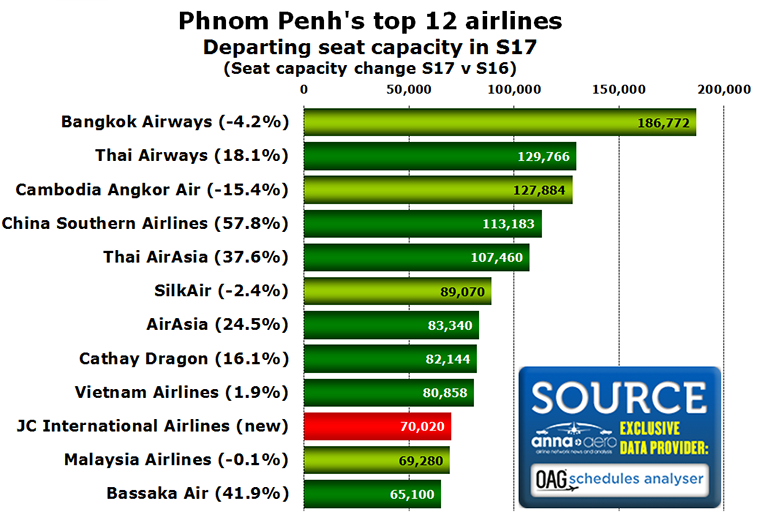 Along with the introduction of JC International, here is a further breakdown of the operations launched by new carriers to Phnom Penh during the past year:

Besides new airlines starting operations from Phnom Penh, existing carriers are also making network changes. While the four airlines in the top 12 are indicating capacity cuts this summer (highlighted in light green), many airlines are prospering and showing double-digit growth in seat capacity for S17. Thai Airways (18% rise in seat capacity for S17 v S16), China Southern Airlines (58%), Thai AirAsia (38%), AirAsia (25%), Cathay Dragon (16%) and Bassaka Air (42%) are six carriers in the top 12 that are indicating double-digit seat capacity growth in S17. Outside of the top dozen, China Eastern Airlines (15th largest airline; 21% growth in seats) and All Nippon Airways (17th; 278%) are both showing significant rises, with the latter airline’s triple-digit increase comes asa result of it launching its daily service from Tokyo Narita on 1 September 2016. Overall seat capacity to Phnom Pneh is up 25% this summer when compared to S16. 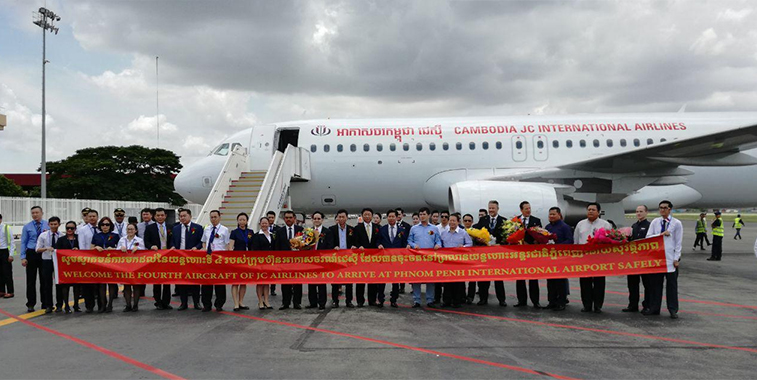 JC International Airlines is one of six new carriers at Phnom Penh this summer, with it earlier in the season welcoming the fourth A320 into its fleet. Founded in 2014, the carrier commenced operations in March and is now Phnom Penh’s 10th largest airline operating routes to Bangkok Don Mueang, Kuala Lumpur, Siem Reap, Sihanoukville and Taipei Taoyuan.