Airbus and Boeing report a 6.7% slowdown in productivity in the eighth month of this year; Hong Kong Airlines became latest A350 operator 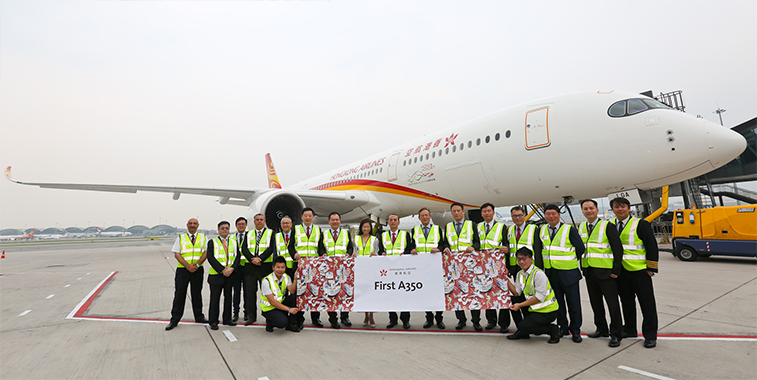 Hong Kong Airlines on 31 August became the latest operator of the A350, with the aircraft arriving in Hong Kong the following day when part of the airline’s team welcomed it to its new home. This is the first of 21 A350s that the carrier has on order. Hong Kong Airlines is hoping to launch new routes to San Francisco, New York, London and other European and American destinations during 2018 with the A350 according to the press release it sent out when receiving its first of the type. The carrier’s first long-haul route with the aircraft will be Los Angeles which begins 15 December.

Airbus and Boeing combined during August delivered 112 aircraft, eight (or 6.7%) less than the 120 units they both managed to hand over during the same month of 2016. The result seen in the eighth month of this year is better than both achieved in the previous month, with 105 units being handed over in July. Boeing, for the seventh month this year, was the star performer of the two manufacturers when it came to the total of units distributed, with the US supplier handing over 66 aircraft in August, an impressive 20 (43%) more than the 46 registered by Airbus. With that, it means Boeing has increased its lead over Airbus in the 2017 delivery race so far to 77 units (up until 31 August). In total, both companies have delivered 875 aircraft in 2017, 16 less than the 891 that both had recorded at this point last year. This represents a marginal drop in productivity, in relation to deliveries, of -1.8% for the period analysed. Up until 31 July this figure was -1.0%, meaning that productivity rates have decreased further during August. In August, 24% of unit deliveries from both manufacturers were wide-body variants, with the remaining 76% narrow-body. This compares to the 29% wide-body, 31% narrow-body ratio recorded in August 2016. 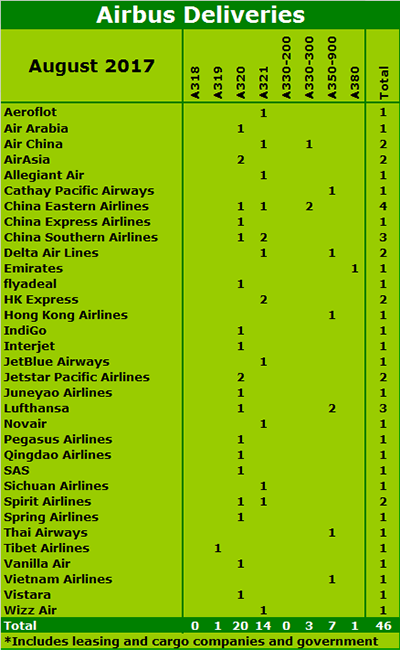 Airbus delivered 46 aircraft in August, down one unit from the 47 delivered in July. The result is worse when compared to the same month of 2016 when the European giant managed to hand over 61 units. For the eighth month of 2017, single-aisle deliveries were led by the A320 (20 units) followed by the A321 (14) and the A319 (one – Tibet Airlines). The leading customers of the former aircraft type were AirAsia and Jetstar Pacific Airlines, with both Asian carriers receiving two of the type. With regards to the A321, the leading customers were China Southern Airlines and HK Express, with both accepting two each.

In relation to the wide-body market, Airbus delivered 11 units, the same that it managed in July, and three less than the same month of 2016, highlighting that the major slowdown on the company’s production line is within narrow-body operations. The leading wide-body aircraft type for a fifth consecutive month was the A350, with seven being picked up from six different airlines, including its latest operator Hong Kong Airlines. Commenting on the new aircraft type entering the airline’s fleet, Zhang Kui, Co-Chairman of the carrier, said: “The addition of the A350 to our fleet will strengthen the connection between travellers and major international destinations, further enhancing Hong Kong’s position as an international aviation hub.” It is stated that the carrier is hoping to use the aircraft type, of which it has 21 on order, to open new links to San Francisco, New York, London, and other European and American destinations during 2018, with Los Angeles from 15 December being the carrier’s first brand new transcontinental route that will be flown on its A350s. Besides the A350, one A380 was received by Emirates during August, with A330-300s also being handed over to two Chinese airlines, namely Air China (one unit) and China Eastern Airlines (two). 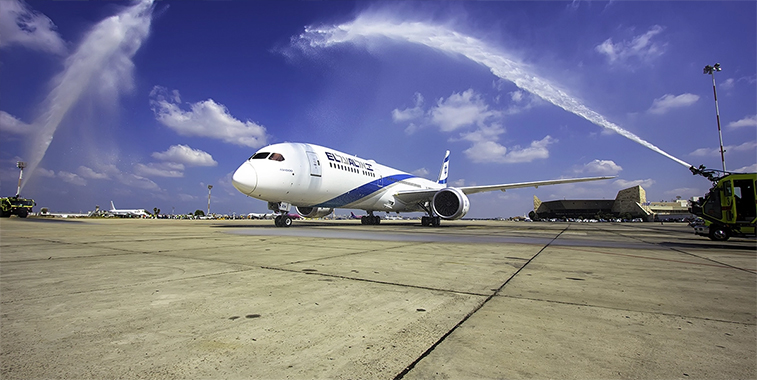 El Al became the newest 787 operator when it welcomed its first one to Tel Aviv on 23 August, with the Israeli airport welcoming the aircraft with a water arch salute. EL AL, which leases the aircraft through an agreement with Air Lease Corporation, will have nine 787-9s and seven 787-8s once all its deliveries for the aircraft type have been accepted. 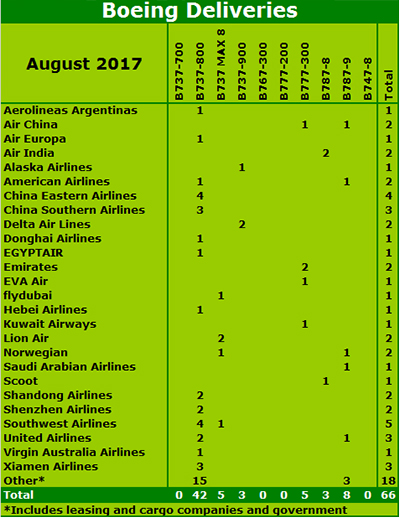 Boeing delivered 66 aircraft in August, of which five were 737 MAX 8s, meaning that the US giant has now delivered 16 of the type (up until 31 August). The most popular narrow-body unit in August was the 737-800, with a solid 42 being distributed to 14 airlines and a mixture of leasing companies. The leading customers of the 737-800 were China Eastern Airlines and Southwest Airlines which both collected four, while the latter carrier also picked up a 737 MAX 8. The next ranking customers to receive the 737-800 in August were China Southern Airlines and Xiamen Airlines, with both receiving three units. In total for August, Boeing handed over 50 narrow-body aircraft, 15 more than Airbus achieved. Along with the 737-800 and the 737 MAX 8, three 737-900s were also distributed in August, with Delta Air Lines (two 737-900s) and Alaska Airlines (one) being the recipients.

An analysis of the wide-body market shows that Boeing handed over 16 wide-body aircraft in August, four less than it managed in July. The leading model to be delivered was the 787-9, with eight being handed over to carriers. One new 787 operator in August was El Al, with Israel’s national carrier collecting its first 787-9 which it leases through an agreement with Air Lease Corporation. “The arrival of the new aircraft will create a revolution in the customer experience. We have set a very high standard of service and product excellence in order to maintain our position as the first and preferred choice for passengers, travelling both to and from Israel,” said El Al CEO David Maimon on the arrival of the 787-9 into the airline’s fleet. “I am convinced that this significant procurement of 787s is a great opportunity for us to meet the highest levels expected.” Along with the eight 787-9s, five 777-300s and three 787-8s were also delivered in August. 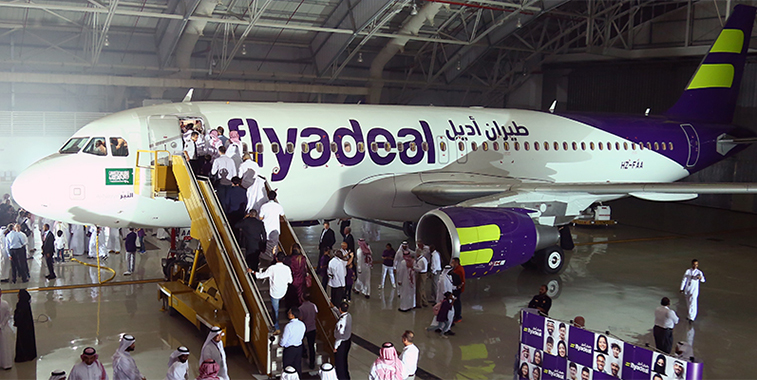 flyadeal is a brand new airline which commenced commercial operations in September on a route between Jeddah and Riyadh. Currently the airline has two A320s, with it picking up its first of the two back in August, with it seen here at a hangar party. At present the airline operates its only route twice-daily, but frequency is expected to increase to four times daily soon.