Cologne Bonn-Belgrade is “Skyscanner Unserved Route of the Week” with over 20,000 searches; Eurowings’ 11th CEE route?? 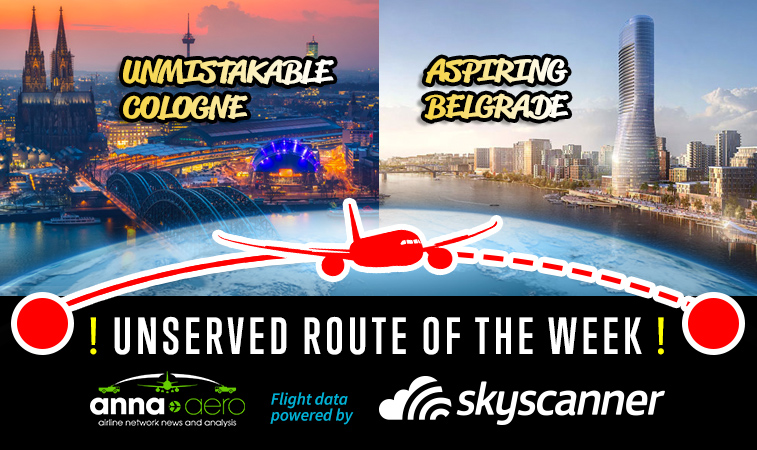 Kula Belgrade, the centrepiece 168-metre skyscraper under construction on the Belgrade Waterfront, is intended as the “new symbol of the Serbian capital.” In contrast, the ‘symbol of Cologne’ needs little improvement, indeed an uninterrupted view of the unmistakable twin spires of Cologne Cathedral is protected by its World Heritage Site status. With the breathtaking architecture sorted at either end, we just need an air service to link the two cities.

With over 20,000 searches in the last year, a potential city pair from Cologne Bonn to Belgrade has been identified as this week’s “Skyscanner-anna.aero Unserved Route of Week” – a powerful analysis based on aspirational data captured from the Skyscanner.net flight comparison site used by +60 million unique visitors per month. “The Belgrade route was last served in 2011 by germanwings for over five years,” comments Tobias Lyssy, Director Aviation Development at Cologne Bonn Airport. “The demand exceeded 43,000 passengers annually.” 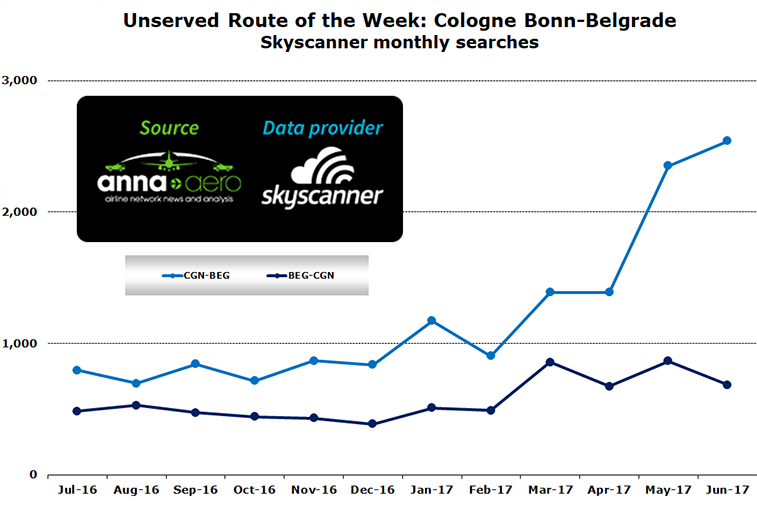 Skyscanner demand on this week’s unserved route shows a bias towards the Cologne Bonn end of the city pair, with a 68/32 split, so on this basis we looked at potential carriers at the German origin first. According to OAG schedules data for the week commencing 9 October, the largest carrier at Cologne Bonn of its 24 serving airlines is Eurowings (includes gemanwings; 48% share of weekly seats). The airline’s non-stop route network from Cologne Bonn of 83 destinations (including 12 long-haul links) does currently feature 10 Central and Eastern Europe routes – namely Split, Budapest, Zagreb, Prague, Sarajevo, Dubrovnik, Zadar, Rijeka, Pula and Pristina. Expanding its European links from the German city is clearly on the airline’s agenda, as it plans to commence two services from Cologne Bonn in the coming months – to Funchal from 11 November and Monastir from 28 March – both to be flown weekly (it also launching Cape Town flights in November and Southwest Florida in May 2018). Although it does not serve the Serbian capital from any of its existing bases, given its presence in the Central and Eastern Europe market and the Skyscanner data on this city pair now being made public, perhaps Belgrade will be a new destination on Eurowings’ network map in 2018.

Eurowings was running a competition to decide its next service from Cologne Bonn, based on votes from the public. Interestingly, the vote and fly concept did not include Belgrade as an option among the 10 suggested destinations. At the time of writing, the poll was being won by Trapani in Italy, narrowly ahead of Mostar, in nearby Bosnia and Herzegovina, with both having secured around 31% of the votes when the competition closed.

Cologne Bonn’s second biggest carrier is Ryanair (16% share of weekly capacity), and with 21 direct destinations, it is the ULCC’s second largest (behind only Berlin Schönefeld) German operation of the 12 airports it presently flies to in the country. Similar to its rival to serve this sector, the Irish ULCC does not currently operate to Belgrade, however expansion in the region is obviously important to Ryanair, as last month it said it would open a new base – its 87th – in Bourgas, Bulgaria, from the end of March, basing one aircraft there and adding 10 new routes. On that basis, both of Cologne Bonn’s largest capacity suppliers could easily be developing a sustainable business plan to make this route work from the German airport. “More than 62,000 Serbs are living in North Rhine-Westphalia, which is 27% of the total in Germany. Serbia is one of the last white hot spots we have in the Balkan region,” adds Lyssy.

Considering the Belgrade end of the route, the airport’s #1 capacity provider is the national carrier Air Serbia, controlling 50% of weekly seats. It should be noted that the Serbian capital already boasts connections to 12 German airports, with the flag carrier providing links to five and offering nearly 5,000 weekly seats between the two markets, with Berlin Tegel (eight times weekly), Düsseldorf, Frankfurt, Stuttgart (all flown daily) and Hamburg  (four times weekly) presently featuring on the airline’s network. Although Lufthansa (two routes; 3,800 weekly seats) and Wizz Air (six routes; 2,300 weekly seats) are also participants in this sector, this opportunity would be best served by the market leader, so hopefully Air Serbia will introduce a Cologne Bonn service as its sixth German route in the near future. 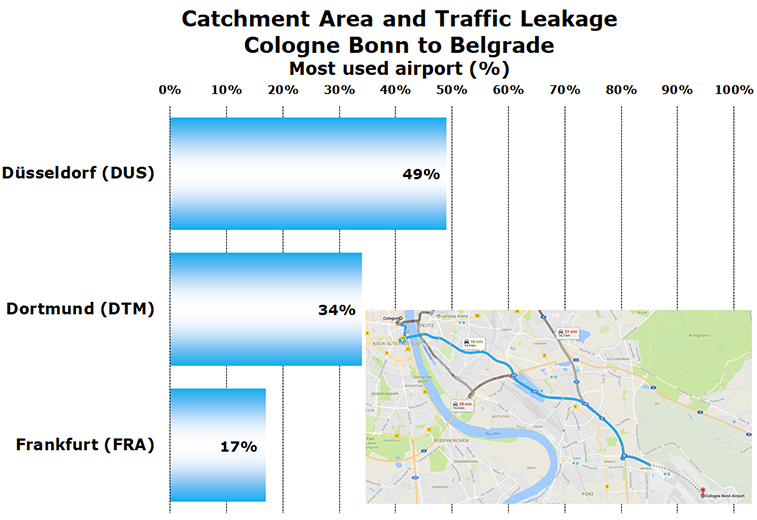 Matt Williamson Skyscanner’s Commercial Executive says: “Cologne Bonn serves less than 1% of the catchment (100 km around the airport) going to Belgrade. With better service, such as a non-stop operation, Cologne Bonn will capture most of that traffic currently leaking to competing airports.”

When looking at the previous year of search data, the busiest month for potential traffic flows (for both directions on the route combined) is June 2017, with over 3,200 searches, over 2,000 higher than the lowest monthly figure, which was recorded in June 2016 (1,200 searches). The seasonality profile of this search data is more extreme than the last Unserved Route of the Week (Turin to Prague), with the low-month traffic representing 36% of the highest month. According to OAG Traffic Analyser, because there is no direct service, the top three connecting options chosen by those passengers who did book travel between Cologne Bonn and Belgrade in the last year indicates that the majority of connecting travellers used Munich (49%), Vienna (22%) and Berlin Tegel (16%). In total, transfer passengers looking to fly between the two cities used 19 different airports to complete their respective journeys.

Indeed, an O&D that is not served by a non-stop flight will typically display a low purchase rate and low traffic. In this instance Skyscanner’s Travel Insight indicates a monthly average of 2.6% for the Cologne Bonn to Belgrade route (see graph below). Therefore, if there was a Cologne Bonn to Belgrade route, and if bookings performed in line with the “Skyscanner market average” for direct services at both airports (7.2%), the airline operating this route could immediately expect an improved purchase rate of 177%, without any increased marketing spend. However, with over 20,000 annual searches in the past 12 months, a twice-weekly service should be immediately viable for the airline choosing to start this potential city pair. “We are convinced that this route will deliver exceptional results for the airline who wants to take a chance upon this opportunity,” concludes Lyssy. 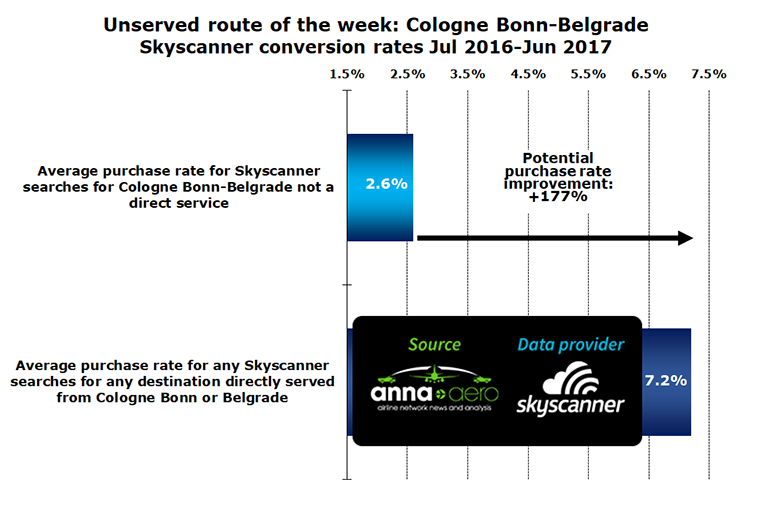