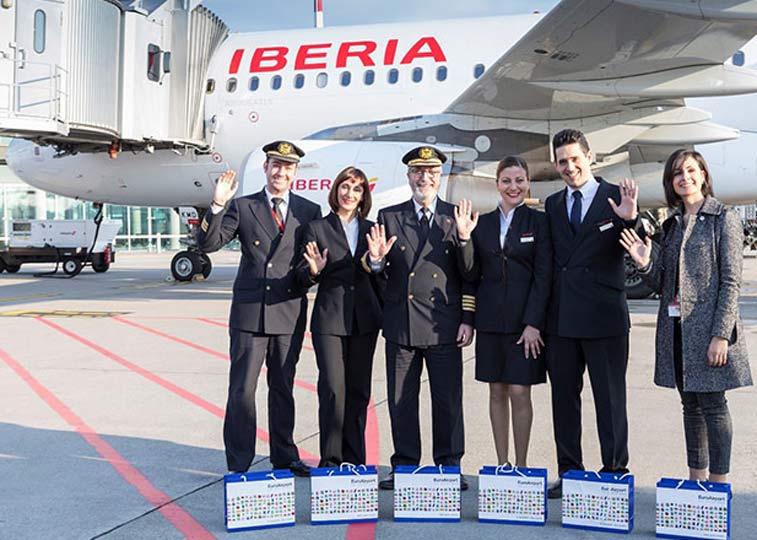 Iberia has been steadily increasing capacity at its Madrid hub since 2014, following successive years of cuts. Earlier in 2017 it added a new route from Madrid to Basel, its third destination in Switzerland along with Zurich and Geneva. In total Spain’s national carrier provides links to 126 destinations from the capital city.

Spain’s national airline Iberia has been gradually rebuilding capacity from its main hub after five successive years of cuts following the global economic crash of 2008-2009. OAG schedules data shows that the combined departing seats available from Madrid on Iberia, its LCC subsidiary Iberia Express, and independent franchise partner Air Nostrum, which operates under the Iberia Regional brand, increased by 19% from 2014 to 2017. The three carriers will offer flights to a combined 124 destinations from Madrid during 2017. Domestic services account for about 22% of the routes, but provide up to 41% of Iberia’s total published capacity from its main base in 2017. 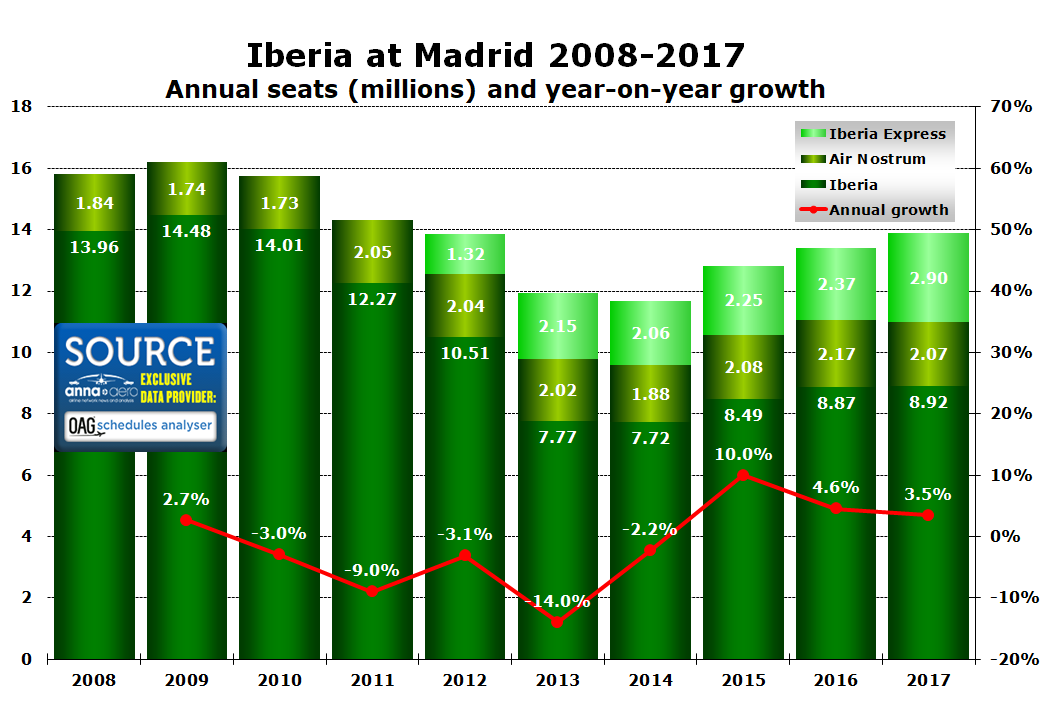 Between 2008 and 2010 the vast majority of Iberia’s published flights from Madrid were operated by the flag carrier’s mainline aircraft or Air Nostrum, with a small percentage performed by other airlines including charter carrier Iberworld. Relative newcomer to the family Iberia Express, which only began services in 2012, has seen the strongest capacity growth from Madrid over the past three years among the three Iberia-branded carriers. In 2017, Iberia Express will provide 41% more seats from Madrid than it did in 2014. Over the same period, the capacity provided by Iberia and Iberia Regional has increased by a more modest 15% and 10% respectively.

The largest year-on-year increase in Iberia Express’ capacity from Madrid took place between 2016 to 2017. The LCC subsidiary has increased its number of departing seats from the capital city by 23% in 2017. Iberia Express has introduced services from Madrid to Cagliari, Cardiff, and will add Toulouse to its network later in the year, but discontinued connections to Athens, Gothenburg, Stockholm Arlanda and Vigo. Toulouse is already operated by Iberia Regional, so Iberia Express will be adding capacity on this sector, while Athens and Vigo are still served from Madrid by Iberia. Much of Iberia Express’ capacity growth was due to the addition of seats on existing services. This includes an increase in capacity on its five largest routes, domestic links to Gran Canaria, Palma de Mallorca, Tenerife North, Santiago de Compostela and Seville. 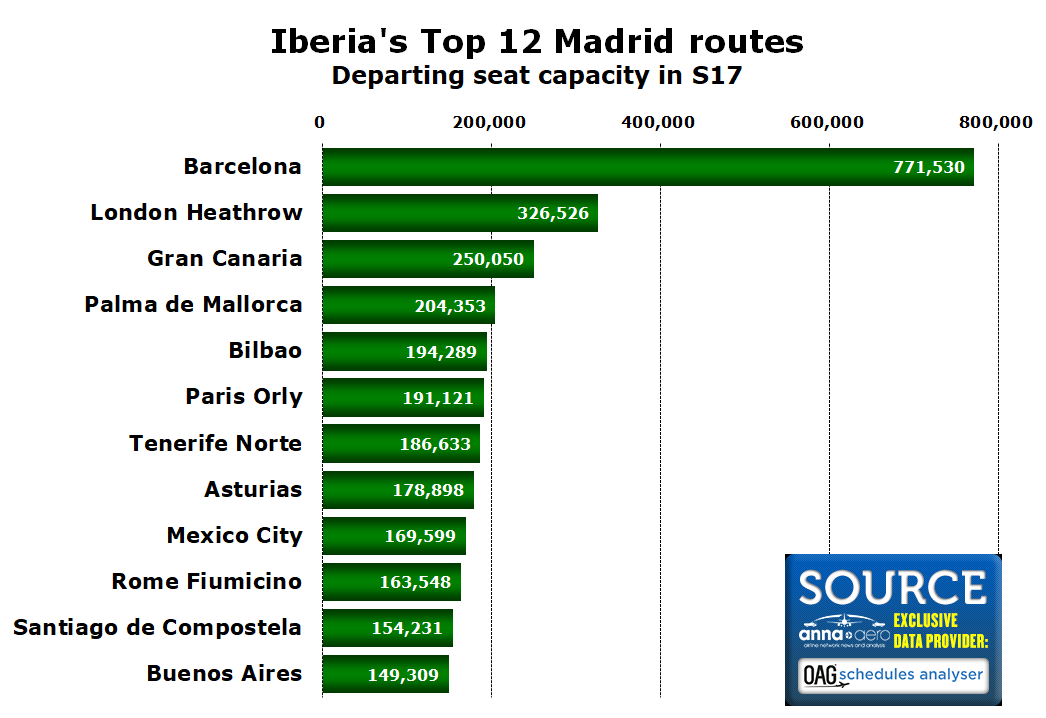 A review of the available published capacity reveals that more than half of Iberia’a top 12 routes from Madrid in S17 link the Spanish capital with domestic destinations. The strongest year-on-year growth took place on the domestic services to Palma de Mallorca, Tenerife North, Santiago de Compostela and Gran Canaria which saw their summer season seats expand by 27%, 21%, 14% and 12% respectively. This is a result of an rise in capacity by Iberia Express. A comparison of the capacity on offer during the week commencing 10 October with the equivalent week in 2016 reveals that Iberia Express has increased its frequencies to Palma de Mallorca, Tenerife North and Santiago de Compostela. The frequency from Madrid to Gran Canaria remained static, indicating that the capacity increase on this route was due to more flights being operated by larger A321s in 2017. OAG schedule data shows that the number of frequencies operated by A321s has grown on all four of the highlighted domestic routes in 2017.

Paris Orly was the top 12 route with the largest reduction in capacity from S16 to S17, with Iberia reducing the number of frequencies by 10%, which resulted in an 8% reduction in seats. Lisbon and New York JFK which were in the top 12 for S16 have dropped out in S17 and have been replaced by Santiago de Compostela and Buenos Aires Ezeiza. 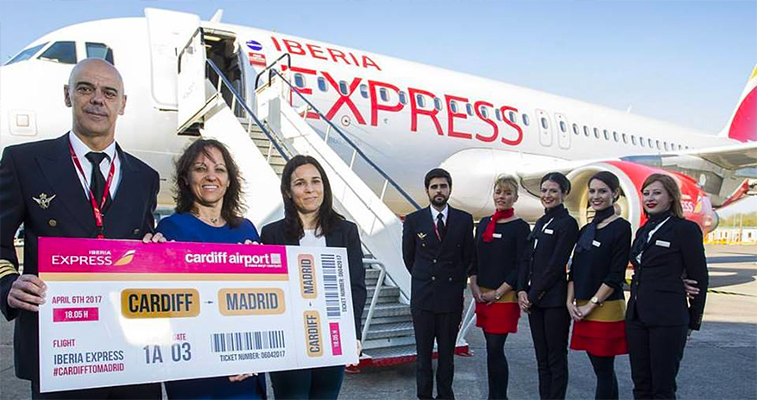 Iberia Express began services in 2012 and has seen the strongest growth from Madrid amongst the three Iberia-branded carriers over the past year. The LCC has launched a number of new services in 2017 including this one linking the capital cities of Spain and Wales in April.