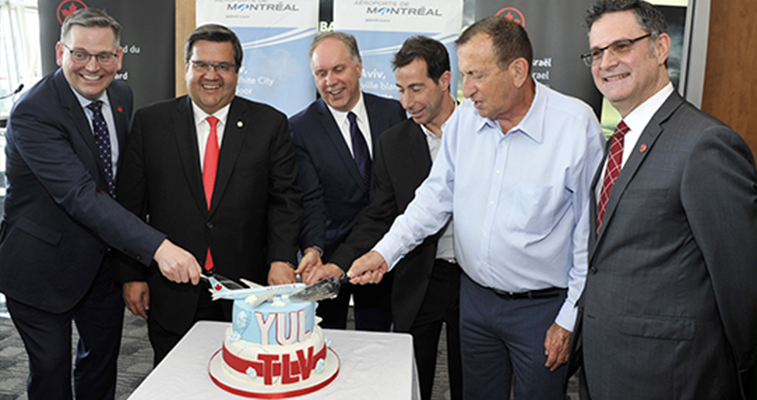 Montreal, with 10% of Air Canada’s overall departing seat capacity in S17, is the Canadian national carrier’s third largest airport operation after Toronto Pearson (27% of departing seat capacity) and Vancouver (12%). These figures include operations from Air Canada Rouge and Air Canada Express. When referring to OAG schedules, Air Canada has increased seat capacity from Pearson by 6.0% this summer and 9.2% from Vancouver. However the growth strategy for the airline from Montreal is more significant, with it being the only major hub for the airline to be reporting double-digit growth in S17. It should be noted that Calgary has only seen a 1.0% increase in one-way seats this summer from Air Canada.

When referring to S17 OAG schedules, Air Canada and its subsidiaries are offering 3.82 million one-way seats from Montreal, a 10% increase on the 3.47 million that it operated in S16. While the Star Alliance member’s capacity has fluctuated during the past decade, from a decline of 7.6% in S08 to a 15% increase last summer, overall Air Canada, including all units, is offering 42% (1.13 million) more one-way seats in S17 when compared to S07. 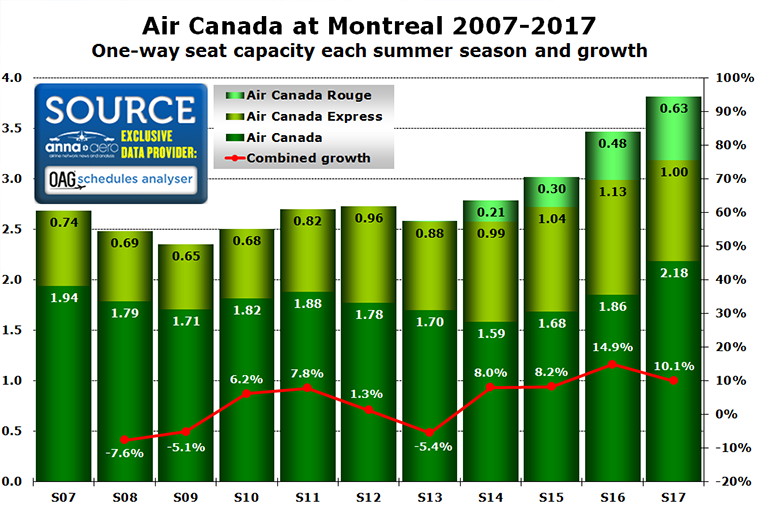 When we split the business units of Air Canada (mainline, Express and Rouge) into individual entities, its shows that mainline and Rouge are indicating double-digit growth this summer. Mainline is showing an 18% rise in seat capacity and Rouge 32% respectively. The latter carrier has only been in operation since S13 from Montreal (just over 5,000 departing seats in S13), but it is now Rouge’s second largest airport operation after Pearson, with 12% of the unit’s departing seat capacity in S17. The successes of mainline and Rouge however have not been mirrored by the airline’s Express operation, with it witnessing a 12% cut in seats from Montreal in S17 when compared to S16.

With Air Canada’s growth being more substantial in recent years from Montreal, anna.aero has broken down the markets served by the airline (domestic, transborder and international) to see where most of the additional capacity has been placed. In S17, the domestic sector observed its seat capacity increase by 2.1% when compared to S16, with all of these additional seats being added to existing services. However the Canadian market’s performance is overshadowed by the 17% growth seen in the transborder sector, and the 28% rise in seats encountered on international services (excluding US) during the same period. 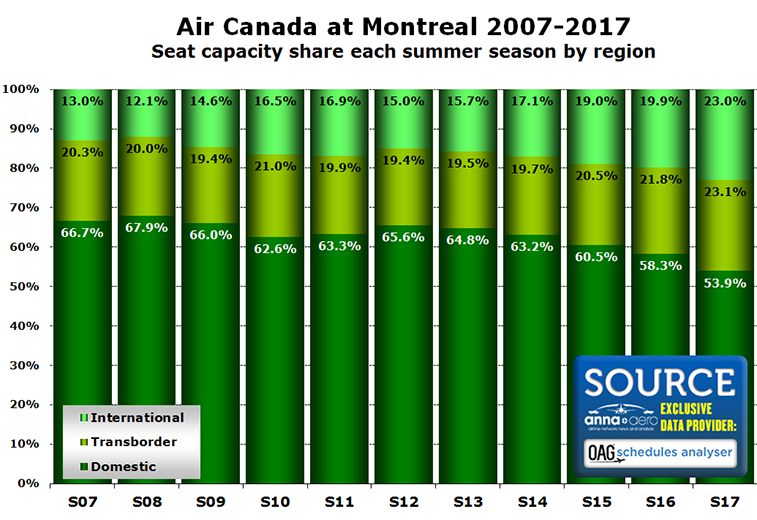 As a result of the larger increases in seats on non-Canadian services over the past 12 months, it means that the domestic sector’s market share of Air Canada seats from Montreal dropped by over four percentage points to just under 54% this summer when compared to S16. This result is a far cry from the 68% market share high which the segment recorded back in S08. Despite the domestic share drop, Canada’s national carrier is operating 22% more departing seats this summer than it did nine years ago when the Canadian market share peaked. The focus of pushing capacity onto non-Canadian sectors has probably been a factor in the reduced seat capacity being offered by Express, with mainline and Rouge being the carriers of choice for starting new non-domestic services.

The leading market for growth at Montreal is the international one (excluding US), with these services showing a 192% increase in departing seats when compared to a decade ago, with Air Canada this summer offering just over 880,000 one-way seats in the sector when referring to OAG schedules. This compares against the 350,800 one-way seats recorded in S07. The result of Air Canada’s strategy in pushing international operations from Montreal has resulted in its market share of the carrier’s seats from the city increasing by 10 percentage points during the past decade. Among the new international routes being flown by Air Canada (including Rouge and Express) this summer include Shanghai, Tel Aviv, Washington Dulles, Marseille, Algiers, Reykjavik/Keflavik, Puerto Vallarta, San Jose (Costa Rica) and Providenciales.

Looking ahead to next summer season, Air Canada has no new domestic services planned from Montreal. Despite the lack of new Canadian services, the Star Alliance member is certainly looking active in the international market. Mainline operations will see the introduction of Casablanca (switching from Rouge), Tokyo Narita, Dublin, Southwest Florida, Nassau and Reykjavik/Keflavik (switching from Rouge). Rouge will introduce Lima (first route to South America) and St. Lucia from this winter, with Bucharest, Lisbon and Phoenix being added next year. The result of this expansion means nine new international services are being inaugurated over the next 12 months from the Quebec city, with Dublin and Reykjavik/Keflavik services planned to be flown on the Star Alliance member’s new 737 MAX 8s. 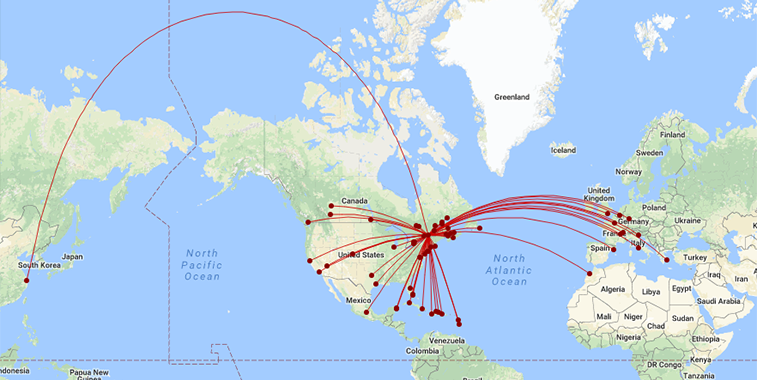 Air Canada, including its Express and Rouge operations, is operating 1,099 weekly departures from Montreal this summer. During the next 12 months the airline will introduce the following international routes from Montreal: Tokyo Narita; Dublin; Southwest Florida; Nassau; Lima; St. Lucia; Bucharest; Lisbon; and Phoenix. During the past 12 months routes to Shanghai, Tel Aviv, Washington Dulles, Marseille, Algiers, Reykjavik/Keflavik, Puerto Vallarta, San Jose (Costa Rica) and Providenciales have been added to the Star Alliance member’s Montreal network.