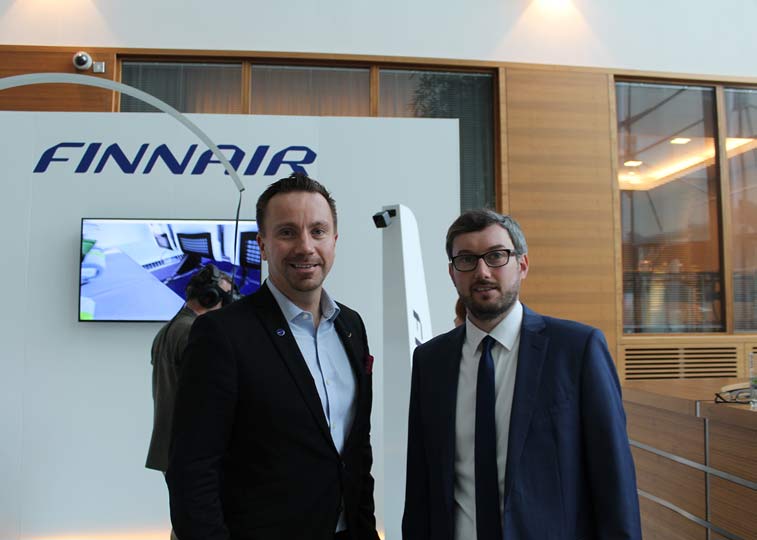 Finnair CCO Juha Järvinen met with anna.aero Chief Analyst Nick Preston in London to talk about the airline’s recent growth, the importance of its connecting traffic and the benefits and opportunities realised by the introduction of the A350. The two also discussed the relative merits of tea and coffee.

The past few years have been eventful ones for Finnair. OAG schedule data show that the Finnish flag carrier has grown its capacity over each of the past five years. It was also the first European airline to take delivery of the A350, Airbus’ latest generation, long-haul, wide-body aircraft.

Finnair CCO Juha Järvinen took time out from his busy schedule to sit down with anna.aero’s Chief Analyst Nick Preston to explain the network strategies driving the airline’s growth and the potential impact the introduction of the A350 could have on future route developments.

anna.aero: Since 2012 Finnair has increased capacity by more than a third. Which network or route development strategies have contributed most to this growth?
Juha Järvinen: “We have been steadily growing capacity year-on-year. 2017 and 2018 will see this growth peak, with ASKs expected to increase by just over 9% this year and closer to 15% in 2018. These growth rates are very much linked to aircraft deliveries including the introduction and expansion of the A350 fleet. The main driver of our capacity growth has been expansion in Asia. Roughly 50% of our ASKs are generated on Asian routes.”

aa: How important is connecting traffic to Finnair’s business model? What percentage of Finnair passengers currently connect via Helsinki and what are the largest connecting markets?
JJ: “Around 50% of our total passengers today are connecting via Helsinki. We see that figure growing. Our current share of the home market for international traffic is 65% and we don’t see much potential to grow that figure. For future growth we are looking to other markets. We believe there is potential to increase our capacity share in some of our biggest focus markets including Germany, the UK and Russia. We are also focussing extensively on North East Asian opportunities, including Japan, South Korea, China and Hong Kong.”

aa: Outside of Europe, Finnair’s largest destination markets are Japan and China. Why is Asia such an important destination market for Finnair?
JJ: “Helsinki benefits from its geographic position between Western Europe and North East Asia, being only seven hours flying time from Western China. This allows efficient aircraft utilisation, including the ability to operate return flights to Helsinki within 24 hours. Helsinki’s location means Finnair can serve Asian destinations that might not be economically viable from other European hubs in London, Frankfurt and Paris. We have increased our capacity to Japan, including more frequencies to Tokyo Narita. Finnair is part of a joint venture [JV] with Japan Airlines [JAL], British Airways [BA] and Iberia covering flights between Europe and Japan. We are the largest European airline serving Japan in terms of weekly frequencies, with 28 from Helsinki and a further seven operated by our JV partner JAL. China is the fastest growing outbound market in the world. We already serve Shanghai, Beijing, Chongqing, Guangzhou and Xi’an and will launch a new service to Nanjing next May.”

aa: Does Finnair plan to increase its connections to any other regions?
JJ: “We are looking at conservative growth in North America by increasing US traffic as part of a transatlantic JV with American Airlines, BA, Iberia and LEVEL. What makes this JV strong is that you can fly non-stop from Helsinki or via Heathrow with BA or American. This allows us to provide seasonal capacity with direct services in peak season, and then by feeding traffic via Heathrow during off-peak. We recently launched a direct service from Helsinki to San Francisco which is already one of our top performing routes. We operate direct year-round services from Helsinki to New York JFK, while San Francisco and Chicago are summer seasonal routes, and Miami operates direct during the winter season. We still see some opportunities in North America but these are planned in association with our JV partners. Finnair’s first daily sector from Helsinki to Heathrow is operated by an A350, to feed additional traffic on to our JV partners’ North American flight bank. The reverse Heathrow to Helsinki sector provides feed from our JV partners for our overnight Asian flight bank.” 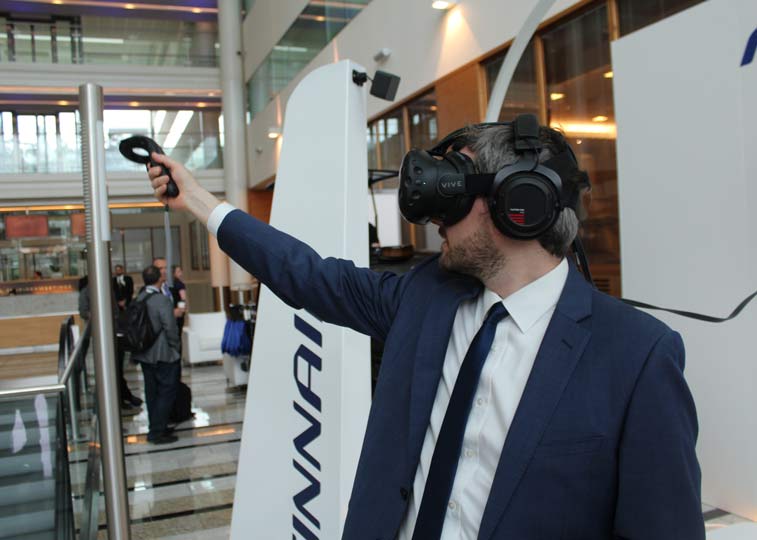 anna.aero Chief Analyst Nick Preston took the opportunity to try out Finnair’s impressive A350 virtual reality experience. The VR programme allows users to walk around realistic mock ups of the airline’s business and economy cabin products for its new fleet flag ship. More adventurous users can experience a simulation of walking out on the aircraft’s wing and peering over the edge during flight.

aa: Finnair was the first European airline to introduce the A350. Has the introduction of this aircraft and its superior operating performance directly led to the launch, or planned launch, of any new routes?
JJ: “We placed a firm order for 19 A350-900s, of which 11 have been delivered. The A350s have replaced A340s in our long-haul fleet. We have decided to keep eight A330-300s, so when the final A350 has been delivered our long-haul fleet will increase to 27 aircraft. The introduction of the A350 has led to route performance improvements on some of our longest sectors, including Helsinki to Singapore. The A350’s greater belly cargo capacity is also an advantage, especially on high-density routes like Hong Kong and Tokyo Narita. The A350’s fuel efficient performance makes longer-haul sectors more economically viable. We are using the aircraft to open two new long-haul destinations from Helsinki this winter. including Puerto Vallarta on the Mexican Pacific coast, a sector in excess of 12 hours flying time, and Havana in Cuba.”

aa: On 11 October it was announced that Finnair was taking 100% ownership of Nordic Regional Airlines (Norra) on an interim basis. Does it have any future partners lined up to take a share in Norra?
JJ: “We see this as temporary solution. We believe the best thing for Norra and the regional platform would be to have an owner which is specialised in regional operations. Finnair will be contacting potential parties in Europe, but we believe there are players that will be interested. Finnair will want to agree a multi-year capacity agreement with the new owner, since we need this regional traffic on both domestic and regional services.”

aa: In 2017 Norra will provide more than 25% of Finnair’s capacity. Could the flights performed by Norra increase over the next few years?
JJ: “Norra operations play a crucial part in our network. Currently Norra ATR turboprops serve domestic routes and services around the Baltic sea, while the E190s are a big part of our Central European flying programme and operate as far as Dublin. Regional flying is likely to grow as overall capacity increases, but the proportion of our total seats provided by Norra will probably remain at a similar level to today.”

aa: Is Finnair concerned about the growth of low-cost long-haul (LCLH) services?
JJ: “Of course, we actively follow what’s happening around us. We take Norwegian seriously since they are a major competitor. Norwegian has grown transatlantic traffic, but when it comes to Asian services there are certain restrictions that make it more difficult for LCLHs to grow. One major element of this is traffic rights restrictions, which remain in place in many Asian markets. This doesn’t mean LCLHs won’t enter these markets in the longer-term, but in the short-term it makes this process more difficult.”

aa: What are Finnair’s aims for the future?
JJ: “For the first nine months of 2017 our ASKs are up, passenger volumes are up and yield is up, so we are very happy with the performance this year. 2017 and 2018 will see our biggest growth peaks, but over a 10-year period our aim is for average growth of 3-4% per year in ASKs, which we believe is more sustainable on a longer-term basis.”

aa: Recent press reports suggest the Finns consume more coffee per person than any other country. Do you prefer coffee or tea?
JJ: “Coffee, but I like tea too. I prefer strong coffee, preferably a double espresso. Coffee is probably popular in Finland due to the long harsh winters!” 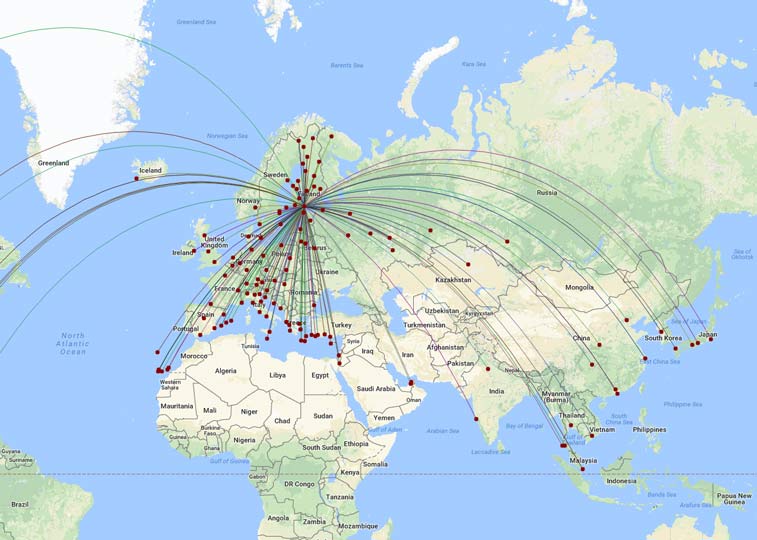 Finnair’s 2017 route map demonstrates the carrier’s focus on connecting traffic via Helsinki to North East Asia. It will serve four destinations in Japan and five in China alone during the calendar year.