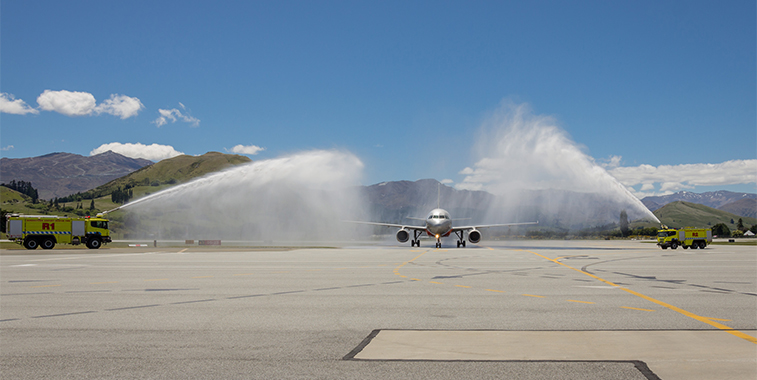 Queenstown Airport’s last known route launch was back in December 2014, the month when Jetstar Airways launched three times weekly flights from the Gold Coast. The New Zealand airport is the nation’s fastest-growing facility in 2017 with regards to additional seat capacity, with it seeing a 13% increase this year. The airport is also the fastest-growing leading airport in New Zealand this decade for the same factor, with annual seats growing 168% over the past 10 years.

New Zealand, the land of the long white cloud, is among the most beautiful destinations in the world visited by anna.aero’s data elves, and it is clear that it is a favourite among global travellers as well. Statistics from Stats NZ show that annual visitor arrivals to the nation increased by 48% between the year ending August 2007 and August 2017, with 3.67 international visitors entering New Zealand in the 12 months between 1 September 2016 and 31 August this year. This represents a ratio of 0.78/1 international tourists per resident for that period. The leading markets for international visitors to New Zealand are Australia (43% of international visitors; up 6.3% when compared to the 12 months previous), China (12%; 0.0%) and the US (9.4%; up 21%).

In 2007 New Zealand’s top 10 airports offered 34.33 million annual seats. In 2017 this figure has grown to 48.72 million, representing an increase in available annual seats of 42%. By splitting the past decade into two segments, it is clear that the majority of the growth has come in the latter part of the last 10 years. Between 2007 and 2012, New Zealand’s top 10 airports recorded an average rise in annual seat capacity of 1.8%, whereas between 2013 and 2017 the mean yearly growth rate has been 5.6%. 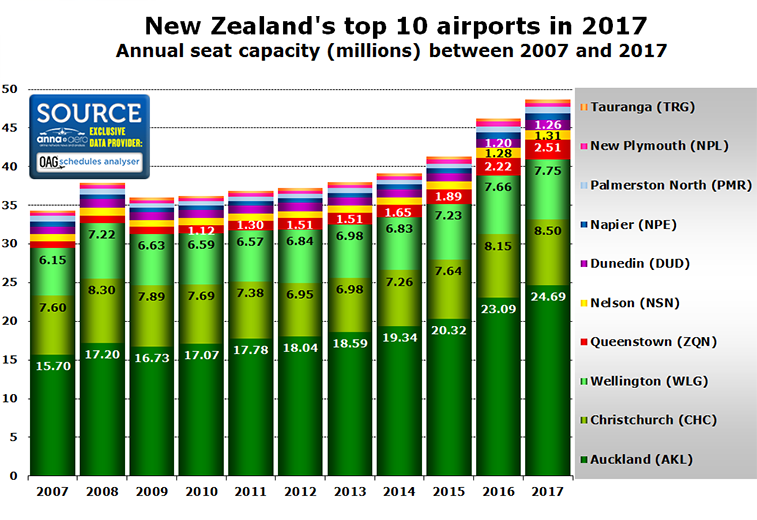 Between 2016 and 2017, Queenstown’s annual seat capacity has risen 13% from 2.22 to 2.51 million annual seats, making it the fastest-growing major airport in New Zealand. When looking at capacity growth during the past decade, Queenstown’s available seat offering has risen 168% between 2007 and 2017, making it the fastest-growing airport in New Zealand with regards to seat capacity for the decade as well as the past year. Second to Queenstown is Auckland, with New Zealand’s leading gateway seeing a 57% increase in annual seats during the past 10 years, and a 6.9% increase in yearly seats between 2016 and 2017.

Airport with the best theoretical load factor – its Queenstown again!

When we take New Zealand’s top four airports annual statistics and compare them with schedule capacity data provided by OAG, it shows that the nation’s fastest-growing airport – Queenstown – is also producing the best theoretical load factor last year, with the airport showing an average load factor of 80%. 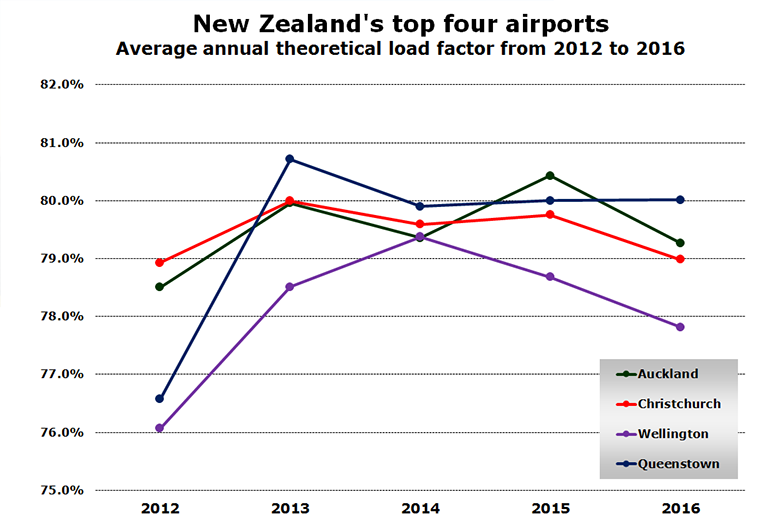 Auckland in 2016 saw its average load factor drop below 80%. Despite it seeing a 12% rise in passenger numbers for 2016, its annual seat capacity grew by nearly 14% which has resulted in a lower load factor being recorded. Since 2012 all four of New Zealand’s leading airports have seen an increase in average annual load factors, ranging from 0.1% at Christchurch to 3.4% at Queenstown.

Between 2016 and 2017 the largest new country market to join New Zealand’s array of destinations is Qatar, with MEB3 carrier Qatar Airways launching a daily service from Doha to Auckland back in February. The Middle East nation is now New Zealand’s 16th largest country market, sitting ahead of Tonga, but behind French Polynesia. However, the oneworld member is not the only airline to offer non-stop flights to the Middle East from New Zealand, with Emirates in 2016 inaugurating a A380-operated non-stop service from Dubai. With this operation being launched in H2 2016, it has meant Emirates has recorded a 92% increase in capacity on its non-stop service for 2017. It should be noted though that the latter airline also links Auckland to Brisbane and Melbourne, routes for which it does have local traffic rights, but it will soon end these connections following its new agreement with Qantas. The new arrangement between Australia’s national carrier and Emirates means that Auckland will go from four daily Emirates A380 rotations to a single daily service for the start of NS18. 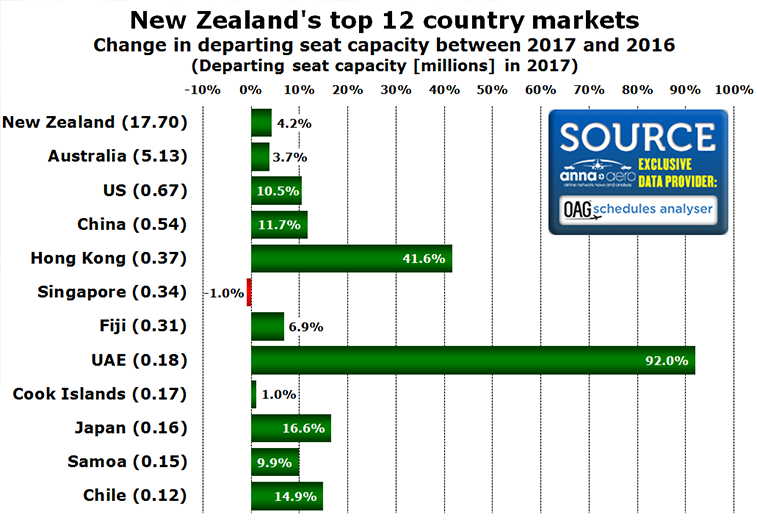 The home market is by far New Zealand’s largest, with domestic operations accounting for 65% of departing seat capacity in 2017, down 0.9% from the total market share it recorded in 2016 despite a 4.2% rise in departing seat capacity this year. Australia is the leading international market from New Zealand, with one-way seats in 2017 increasing by 3.7% to 5.13 million. Following Australia, the US (11% rise in one-way seats) and China (12%) conclude the top three international destinations, which supports the statistics from Stats NZ which show these three as the top destinations for international visitors to New Zealand.

With New Zealand’s unique geographical placing, it makes it hard to be reached non-stop from Europe, a key originating destination for tourism to the Southern Hemisphere nation. The top two markets for European tourists to New Zealand are the UK (246,400 visitors year ending August 2017; 15% growth when compared to the previous year) and Germany (104,256; up 14%) according to Tourism New Zealand. When taking a close look at OAG Traffic Analyser data for traffic between Europe and New Zealand in 2016, there was an estimated 828,400 two-way passengers making the journey, up 13% when compared to the total of 732,400 recorded for 2015. The top three connecting hubs for transit traffic between New Zealand and Europe in 2016 were Dubai (30% of transit traffic), Singapore (14%) and Hong Kong (9.6%). In 2017 so far, the top two hubs still remain Dubai and Singapore, however as a result of Qatar Airways’ new route, Doha has become the third most popular connecting hub between New Zealand and Europe. 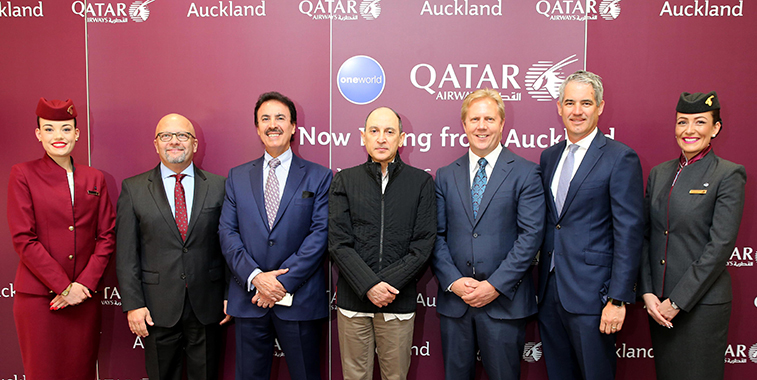 Qatar Airways back in February launched non-stop flights between Doha and Auckland, with it becoming the longest flight in the world. Seen at the launch are: Qatar Airways SVP Asia Pacific, Marwan Koleilat; Ambassador Nasser bin Hamad Mubarak Al-Khalifa; Qatar Airways CEO, Akbar Al Baker; Todd McClay, Minister of Trade and State Owned Enterprises; and Adrian Littlewood, Auckland Airport CEO. The new service has made a strong impact on traffic between Europe and New Zealand, with Doha now being the third largest connecting airport between the two regions.