79 new airlines begin life in 2017; 25 go out of business – Europe has the highest number of start-ups, but also the most failures 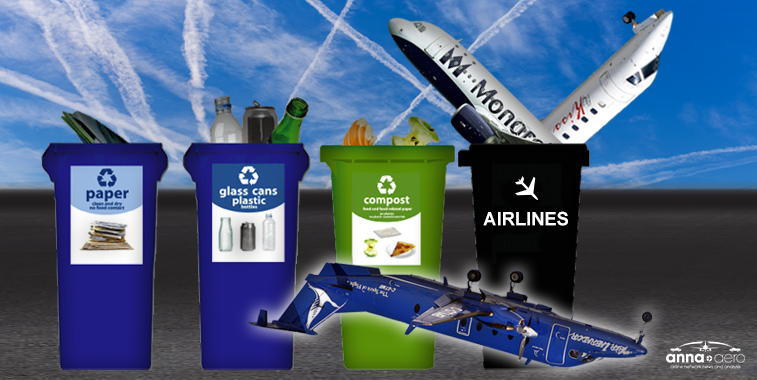 Time to take out the trash. According to our friends at ch-aviation, 25 airlines have been put on the scrap heap so far this year, including 50-year-old Monarch Airlines, as well as French regional carrier Fly KISS which commenced operations less than a year ago. Fortunately for all of us in this part of the industry 79 new airlines have also launched flights in the same period. Phew!

Conditions to start a new airline could not better – with favourable economic tailwinds and low fuel prices. Hang on. What about things like Brexit, geo-political instability and security issues? Conditions could not be worse for staying in business as an airline. Thanks to our friends ch-aviation over in Chur, Switzerland, we can determine that its the former view (favourable market conditions) that prevails, as according to its database, 79 new airlines have been started so far in 2017, with just 25 going out of business in the same period. The database also identifies another 19 new operators beginning life this year and 10 more failures, but these have been omitted from this analysis as they are either cargo airlines or business/private charter operators.

Europe is the most-dynamic global region, with 29 (37%) new airlines being set-up in the first nine months of 2017, but its has also provided the most failures too, with over half (14 or 56% of the total) coming from the continent. So much for Europe being a mature market. Some of the most notable start-ups and failures are also from this part of the world, with the arrival of easyJet Europe in July, as well as the recent sad demise of Monarch Airlines, whose name in the industry had a 50-year history. easyJet Europe’s principal place of business will be in Vienna, and thanks to its Austrian Air Operator Certificate (AOC) it will allow the new carrier to continue operating intra-European routes post-Brexit. IAG-owned LEVEL, a low-cost long-haul carrier which began operations in June, was also a new airline which launched this year in Europe. 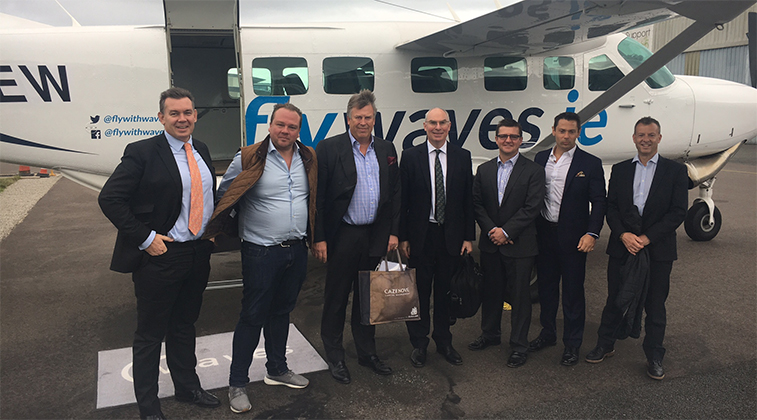 Waves is a new airline based in Guernsey which received its AOC in September. The airline recently had a soft launch, beginning passenger and freight services. It is now undertaking flights between Guernsey and Jersey using a Cessna Grand Caravan, with the airline stating that additional aircraft will arrive shortly. Among those at the soft launch was Nick Magliocchetti, CEO of Waves (second-left) who said of the launch: “This is a new approach to air travel and we want to ensure that every element exceeds not only our clients’ expectations but also our own. A soft launch using friends and family, who understand what we are trying to achieve and how we intend to do that, allows us to test everything in the smallest possible detail.”

It might be home to the world’s single biggest aviation market, but in terms of airline entrepreneurial spirit North America seems to have lost its appetite for start-up carriers. Perhaps the most eye-catching addition to the airline ranks is Swoop, the ULCC owned by WestJet. Officially announced on 27 September, the fledgling airline will be based in Calgary, and will tentatively begin flying in June 2018. With 24% of all airline closures, North America is the second highest provider of carrier demises in the first nine months of 2017. Two of the more high profile names to disappear are Canadian LCC NewLeaf which has been merged into Flair Airlines and Shuttle America which has been subsumed into its parent Republic Airlines. 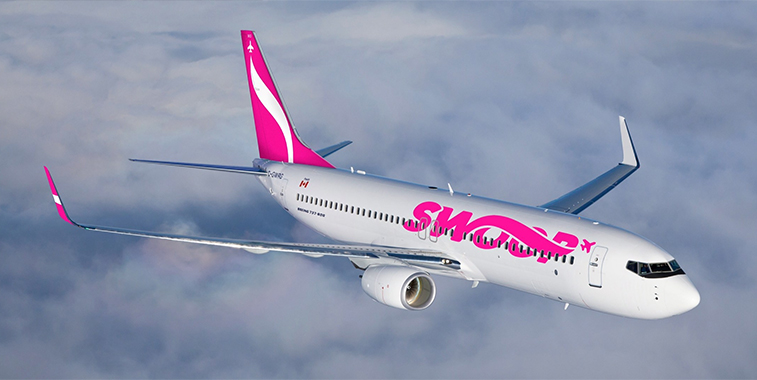 Swoop is the new Canadian ULCC that has been set-up by WestJet. Although launched in 2017, the carrier is scheduled to begin flying in June 2018, with its main hub being Calgary. It will initially operate a fleet of six 737-800s. The main competition for Swoop will be another new ULCC – Canada Jetlines. Founded in 2013, but with operations starting next year, the latter carrier will also operate 737-800s out of bases in Hamilton and Kitchener.

China is the country, which along with the UK, has delivered the most new airlines so far in 2017, with five each. Argentina and Ireland are both responsible for four new airlines respectively, while Bulgaria, India, Iran, South Africa and the US have all provided three new operators each. Conversely, the US and Canada top the charts when it comes to countries with the most failures (three each), with Russia and the UK not far behind with two a-piece. Noteworthy start-ups and demises in Asia are AirAsia Cambodia, yet another incarnation in the ever-expanding AirAsia family, as well as Tigerair Singapore an airline name which has been lost following its merger under the Scoot brand earlier this year.

Of the 79 new carriers whose tailfins will now be gracing the world’s airports – or soon will be – the overwhelming majority (46 or 58%) are logged as being scheduled carriers. 21 (27%) are charter airlines, with the remaining 12 (15%) start-ups being classified by ch-aviation as virtual carriers. Africa is clearly a continent full of opportunity, with 14 new airlines being set-up, against just one failing so far in 2017. These new carriers come from a diverse range of nations, with 11 countries in the region benefiting from the brave entrepreneurial endeavours of those starting new operations.

Getting from being just a great idea on paper to actually launching flights is often a long and tortuous journey, with many entities never getting any further than that initial stage. The number of carriers that ch-aviation classifies as being start-up and not yet in the air is 56 (71%), leaving 23 (29%) as having achieved the feat of moving from idea to inaugural. Among those is South America which have managed to go from conception to inception is Chilean ULCC JetSMART. Started in July, the Santiago-based airline was set-up by Indigo Partners, which has stakes in Frontier Airlines and Volaris. Other notable start-up ventures in the region include Azul Uruguay, Norwegian Air Argentina and VivaAirPanamá, which are all spin-offs of bigger parent brands. 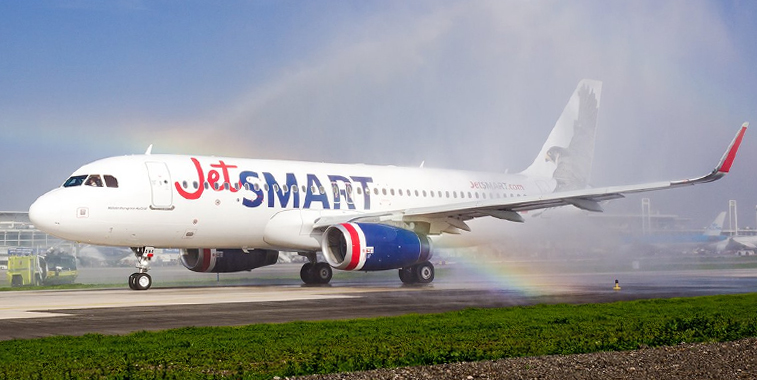 JetSMART commenced operations in July, with its first flight to Calama being given a water arch salute as it departed Santiago. The carrier currently operates three A320s on domestic sectors.  It was created by Indigo Partners, which now controls Denver-based Frontier Airlines and Volaris.

Our last table represents new airlines from across three regions – namely Australasia, Caribbean and the Middle East. While chances of setting up a new airline in Australasia and Iran would appear to be bouyant, they are 50/50 in the Caribbean. Earlier this year, the Government of Samoa announced that, with the initial support of Fiji Airways, it would re-launch international jet services to and from Samoa, using the name Samoa Airways, following the cessation of its previous agreement with Virgin Australia Airlines. Flights between Samoa and New Zealand and Australia begin in November.

At the time of writing we are 286 days into 2017, which means that a start-up has been born around every three-and-a-half days. So by the time you receive the anna.aero newsletter next week, another group of aviation professionals will have thought “hey…I am tired of flying on airline X…they have no idea what they are doing…let’s start an airline ourselves!” One of the more notable start-ups so far in 2017 was easyJet Europe. The carrier’s first Austrian-registered aorcraft was welcomed to its home base at Vienna Airport on 20 July with a water arch salute. Parent company easyJet was awarded an Air Operator Certificate (AOC) by Austro Control and an airline operating licence by Austria’s Federal Ministry for Transport, allowing the carrier to continue operating intra-European routes post-Brexit. easyJet will phase the re-registering of the remaining aircraft, around 110 units, that are required for its EU-based operations into easyJet Europe over the next two winters.