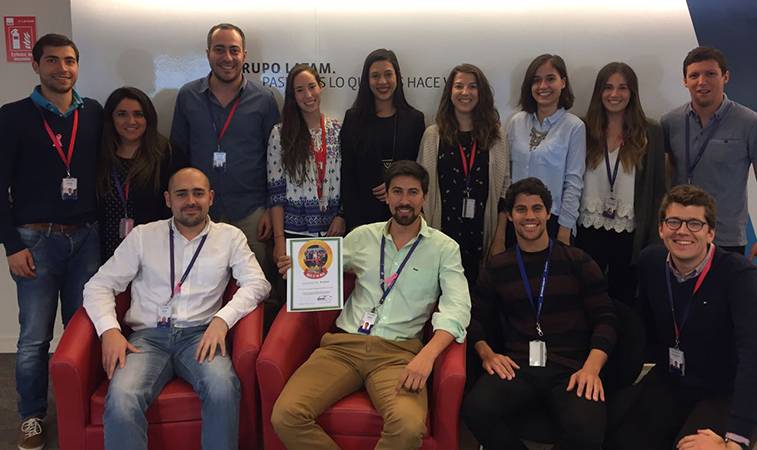 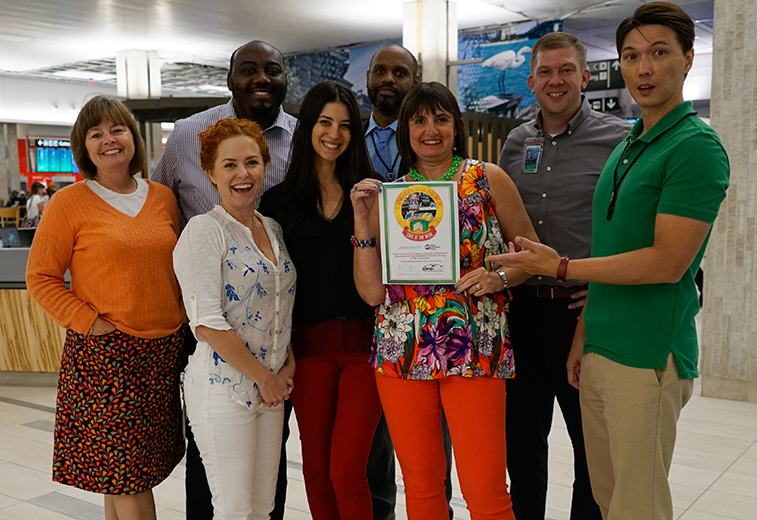 Having celebrated winning this award back in September for the cake which it made for Icelandair’s inaugural service from Reykjavik/Keflavik, Tampa has once again been crowned Cake of the Week champion. This time the Floridian airport has won the award for not one, two, or three, but four showstopping cakes which it presented at the launch of Frontier Airlines’ new routes to Long Island MacArthur, Minneapolis-St. Paul, Providence, Colorado Springs and St. Louis. Seen celebrating Tampa Airport’s Cake of the Week success are: Kelly Figley, Airport Marketing Manager; Greg Forrest, Senior Business Analyst; Kari Goetz, Director of Marketing; Ilana Goldenberg, Air Service Marketing Coordinator; Justin Edwards, Sr. Manager of Brand and User Experience; Debbie Thomas, Marketing Coordinator; Kenneth Strickland, Director of Air Service and Development; and Robert Connelly, Graphic Designer. 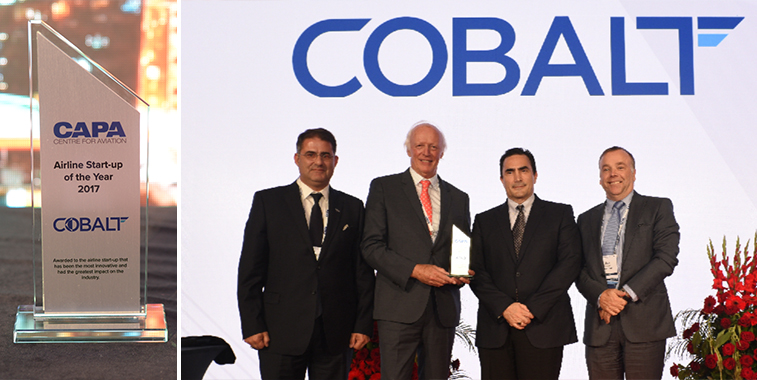 Cobalt was recently named CAPA Airline Start-up of the Year 2017 at an award ceremony in London. Cobalt received the award for its activity over the first year of its operations, with the carrier being recognised as having been the most innovative start-up, as well as being the carrier delivering the greatest impact on the industry since its launch. Seen collecting the award from Peter Harbison, Executive Chairman, CAPA (centre-left) is Andrew Madar, CEO of Cobalt (centre-right). Madar commented on the award win by saying: “We are delighted that the hard work and passion of the Cobalt team has been recognised. All of us in Cyprus are dedicated to building an airline that is worthy of the country we are proud to call home, and from our customers’ comments, we are sure that we are on the right track.” 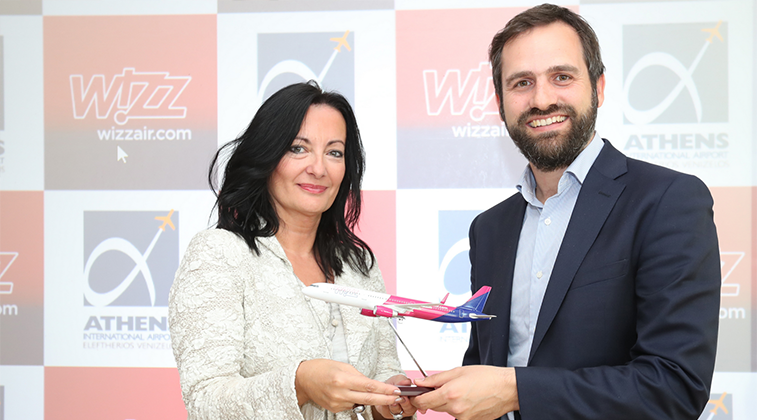 On 16 October Wizz Air announced that from the start of S18 it will begin serving Athens, with the ULCC planning to launch eight routes to the Greek capital. The carrier will initially serve Athens from Bucharest (daily), Budapest (four times weekly – increasing to daily in September), Chisinau (twice-weekly), Cluj-Napoca (twice-weekly), Katowice (twice-weekly), Kutaisi (twice-weekly), Sofia (daily) and Vilnius (three times weekly). Seen at the announcement of the new venture are Ioanna Papadopoulou, Director of Communications & Marketing, Athens Airport, and George Michalopoulos, CCO of Wizz Air. Michalopoulos commented on the news by saying: “It is undeniable that Athens has been one of our most requested destinations for a number of years. Our new services and low fares will create opportunities for Greek customers to visit some of the most beautiful cities and regions in Central and Eastern Europe while also stimulating inbound tourism and business links. We look forward to starting a fruitful partnership with Athens Airport and remain committed to bringing even more opportunities in the future.” This announcement brings added competition to Europe’s largest airline Ryanair which already serves Bucharest, Budapest and Sofia from Athens, while it has confirmed it will also serve Vilnius (from S18) and Katowice (W16/17). 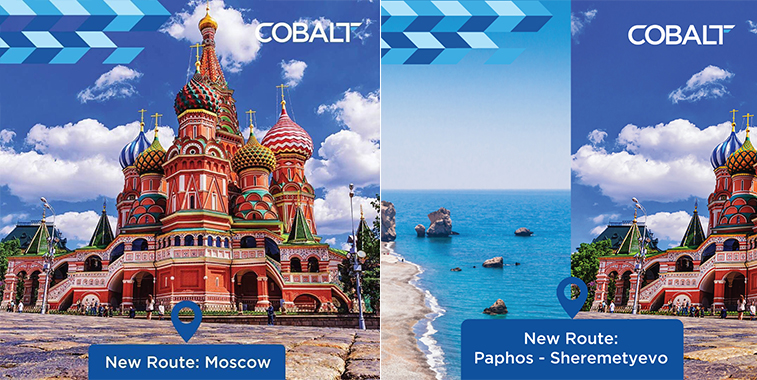 On 11 October Cobalt announced its first scheduled service to Russia, with the Cypriot carrier beginning a twice-weekly (Thursdays and Sundays) service between Paphos and Moscow Sheremetyevo from 29 October . This becomes the airline’s second route from Paphos after Athens. Speaking about the new route, Andrew Madar, Cobalt’s CEO said: “We are pleased to expand our routes for W17/18 by launching flights from Paphos to Moscow. Now Russian visitors and residents alike can look forward to trying the Cobalt experience and a range of destination choices.” This is the first time that there has been a scheduled service between Paphos and Sheremetyevo since 2014 when referring to OAG schedules. 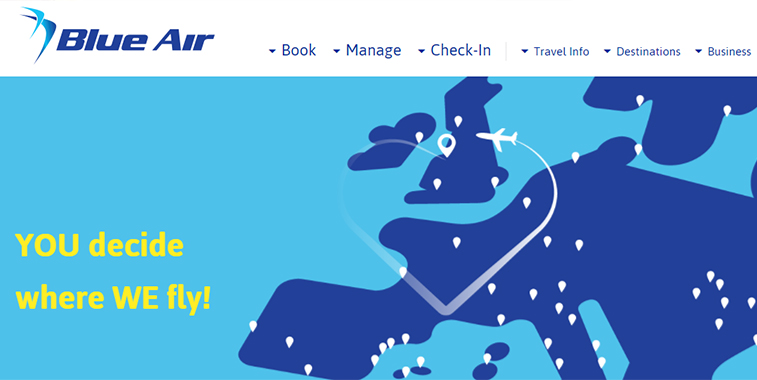 Blue Air has recently announced a competition asking customers from Liverpool where they would like to fly to in 2018. It’s been nearly a year since Blue Air asked Liverpool residents to design the livery of their first UK based aircraft, and now they’re asking passengers for their feedback once again. Travellers which suggest the new destination chosen by the airline will all go into a draw to win two tickets to their chosen destination. Elena Signorelli, Blue Air’s Sales and Marketing Manager for North-West UK commented: “This is a great opportunity for us as to get to know the local people. We have said since day one that we want to be seen as the region’s airline, and there’s no better way to demonstrate this than by asking passengers where they would like us to fly to next.” Currently Blue Air has one 737-800 stationed in Liverpool and serves seven destinations including three in Romania, Blue Air’s home market. To enter the competition, follow this link. 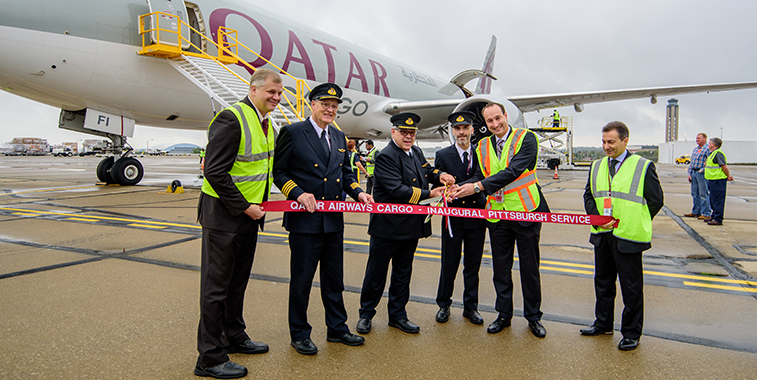 On 12 October Qatar Airways Cargo commenced operations to Pittsburgh, with flights operating twice-weekly (Wednesdays and Saturdays) from Doha, with outbound services stopping in Luxembourg and Atlanta before arriving in Pittsburgh. On the return from Pittsburgh (on Thursdays and Sundays), the aircraft stops at the cargo carrier’s European hub in Luxembourg. Qatar Airways’ Chief Officer Cargo, Ulrich Ogiermann, said of the new service: “It is a proud moment for us to be the first international airline to commence scheduled freighter services to Pittsburgh, bridging the air cargo gap between Americas, Europe and Asia. The launch of this new route strengthens our commitment to supporting the American import and export markets and offers a direct freighter connection out of the Commonwealth of Pennsylvania to Qatar Airways Cargo’s expansive global network.” See how Pittsburgh Airport’s FTWA compares to others from around the world. Cardiff Airport this week unveiled plans for further improvements to its terminal and car park facilities. The investment of £4 million (€4.48 million) will see projects completed in time for next summer. The works will transform the experience for customers both arriving to and departing from Wales’ national airport, continuing developments since the change of ownership in 2013. The next phase of investment plans for the terminal include: new Costa Coffees in the arrivals hall and departure lounge; additional seating areas in the departure lounge; a larger WHSmith store; an expanded executive lounge; upgrading the hold baggage screening system to meet enhanced security requirements; new meet and greet car parking for customers with a dedicated area for drop off and pick up close to the terminal building; and a new car hire centre close to the terminal building.