Thai Airways returns to growth after 2014 cuts; THAI Smile leads the way with 8% growth in 2017 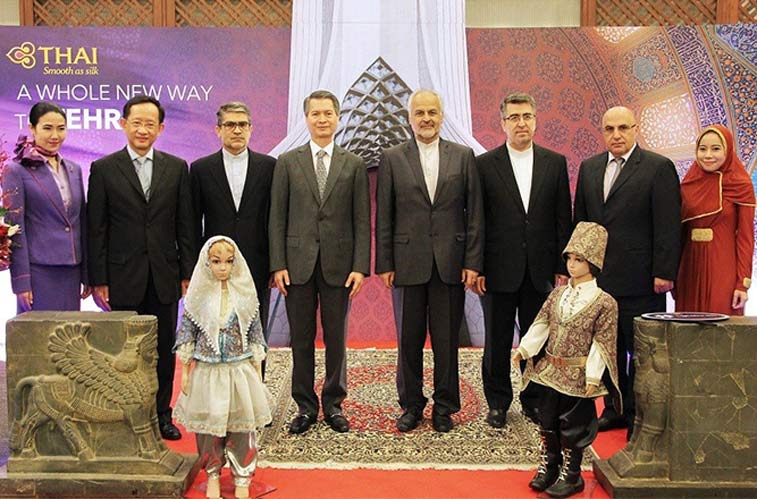 More than 80% of Thai’s published capacity is flown on international services in 2017, leaving its regional subsidiary THAI Smile to take up the some of the slack on domestic routes. In October 2016, Thailand’s national carrier launched a new link between Bangkok and Tehran.

Thai Airways, when combined with its regional subsidiary THAI Smile, is the largest airline group in Thailand based on departing one-way capacity in 2017, putting it ahead of Thai AirAsia, Nok Air and Thai Lion Air. The national flag carrier has been gradually rebuilding capacity over the past three years with the help of its new regional arm, following cuts made in the immediate aftermath of political instability and a military coup in its home market in 2014. 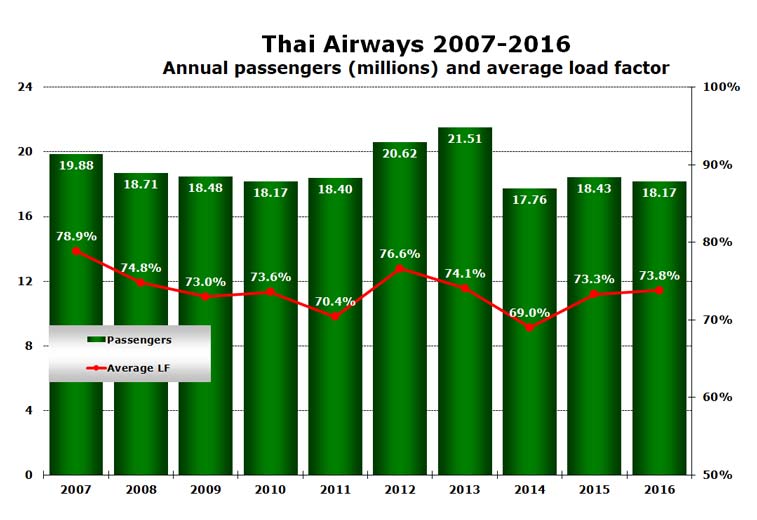 Source: Thai Airways. Figures for THAI Smile are not included.

Annual passenger numbers for the mainline carrier, Thai, decreased by 9% from 2007 to 2010, before returning to growth over the next three years. From 2011 to 2013 passenger numbers increased by 17% before seeing their largest decline between 2013 and 2014. This was most likely due to capacity cuts following the political upheaval in Thailand in early 2014, but it should also be noted that this year marked the introduction of services by THAI Smile, which would have taken some passengers away from the mainline operation.

The events of 2014 also had an effect on Thai’s load factors. The airline’s average annual load factor decreased by 5% from 2013 to 2014 before rebounding with 4% growth the following year. Figures for 2016 show that Thai’s average load factors were about 75% for domestic services and those to Europe and Australia, while other regional routes had lower loads of around 72%. 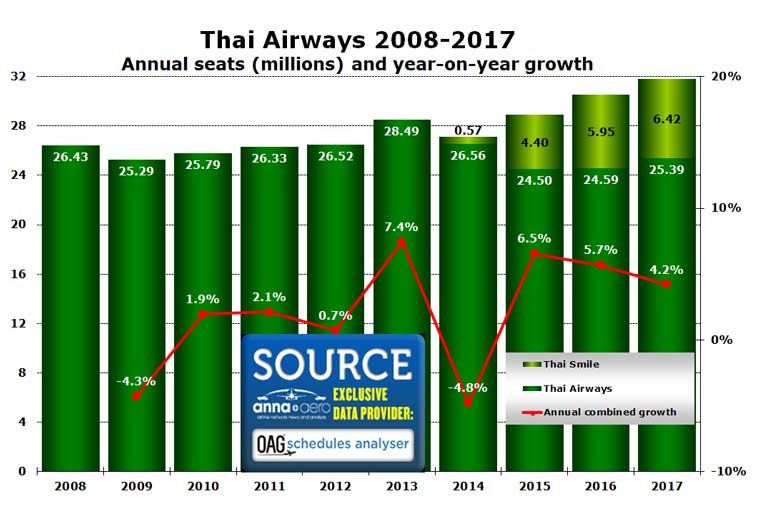 The largest reduction in Thai’s and THAI Smile’s combined published capacity over the past 10 years occurred between 2013 and 2014. This was despite the launch of services by Thai Smile during 2014. Over the past three years the capacity provided by both carriers has been on the increase. THAI Smile has seen the strongest rate of growth during this period, increasing its capacity by 46% from 2015 to 2017, compared to just a 4% increase for the mainline airline.

THAI Smile’s capacity growth is the result of opening new routes previously unserved by Thai, and in some cases seeing services transferred from the mainline carrier on existing airport pairs. THAI Smile has opened six new routes from Bangkok  alone since 2014, which each have more than 100 annual frequencies in 2017. The largest of these new routes, based on 2017 capacity, are Suvarnabhumi to Siem Reap in Cambodia, which is operated twice-daily, year-round, and the domestic link from Suvarnabhumi to Narathiwat. THAI Smile’s largest routes by frequency are the domestic links from Suvarnabhumi to Khon Kaen and Hat Yai, which it has taken on from its parent carrier. 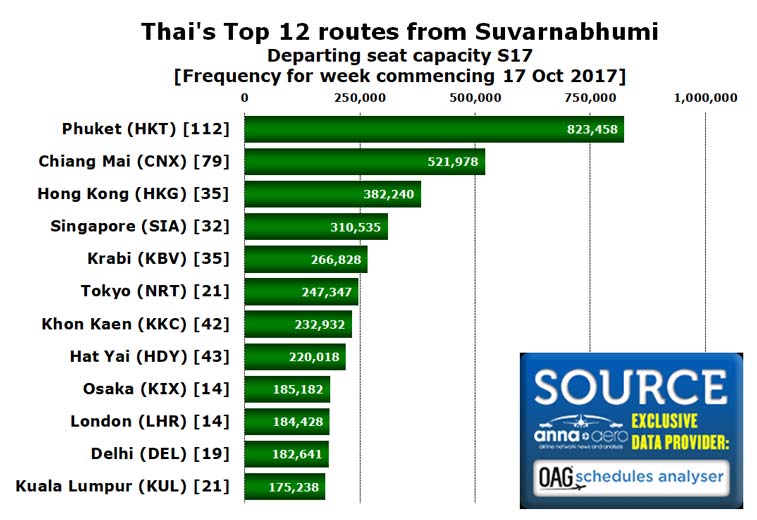 Suvarnabhumi is by far the largest origin point in the combined Thai and THAI Smile network, accounting for nearly 50% of all capacity in 2017. The next largest origin airport is Phuket which accounts for just 5% of departing capacity, the majority of which operates on services to Bangkok.

Five of the top 12 routes for the combined Thai and THAI Smile operation from Suvarnabhumi in S17 are domestic services. The domestic links to Krabi, Khon Kaen and Phuket saw the largest capacity growth amongst the top 12 routes from S16 to S17 with seat numbers increasing by 89%, 34% and 21% respectively. Most of the growth on these routes was due to capacity being added by THAI Smile. Singapore saw the largest reduction in capacity from S16 amongst the top 12 routes. Krabi and London Heathrow entered the top 12 from Suvarnabhumi for S17 while Beijing, Udon Thai and Yangon dropped out. Heathrow was the only top 12 destination outside of the Asia Pacific region. 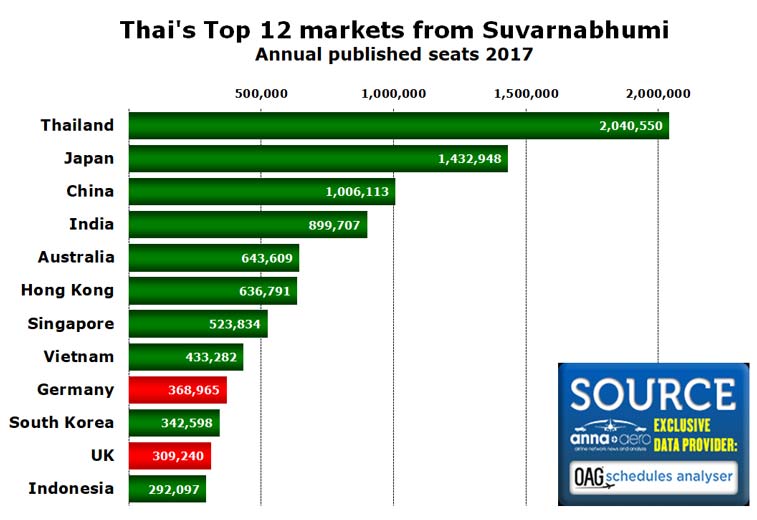 International routes will account for about 71% of the combined published capacity of Thai and THAI Smile in 2017. Only 16% of Thai’s published capacity will be operated on domestic services compared to 80% for THAI Smile. The mainline carrier has reduced the percentage of its overall capacity flown on domestic routes by 10% since 2014, suggesting a strategic shift of domestic services onto its regional subsidiary. From 2014 to 2017 Thai increased its international capacity by 9%. 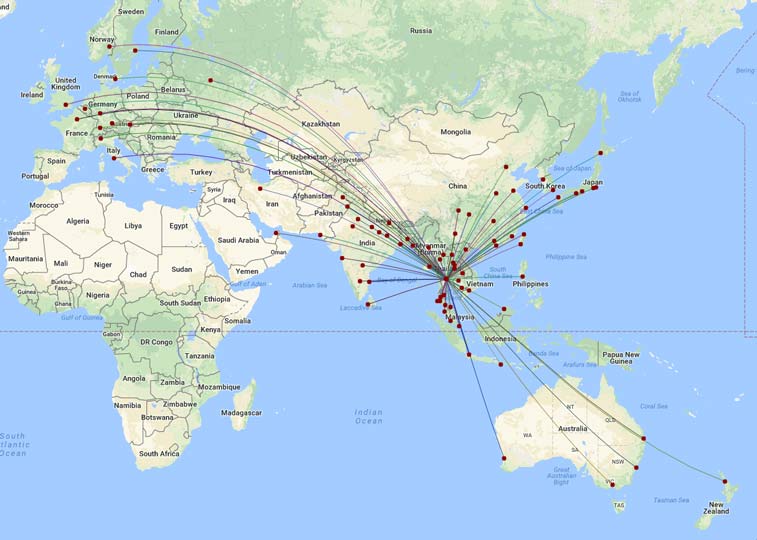 The combined 2017 route map for Thai and THAI Smile reveals a focus on domestic, intra-Asia Pacific and European services. Some of its longest international sectors link Bangkok Suvarnabhumi with Western European markets including the UK and Germany.