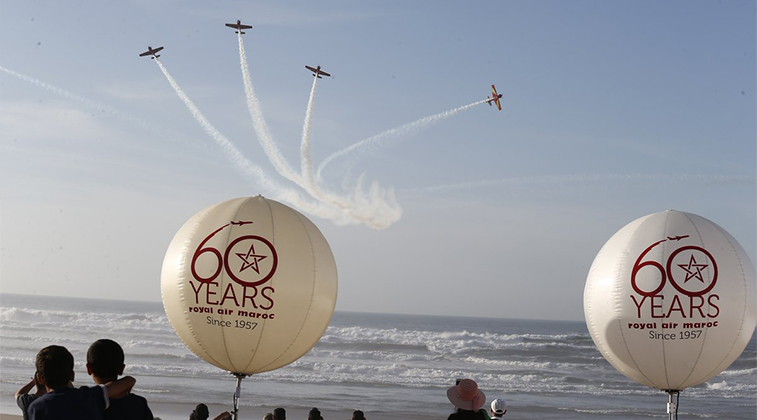 Royal Air Maroc recently celebrated its 60th birthday with a beach party where an aircraft stunt display was performed. The airline, which has grown from 16 to 55 aircraft between its inception (following the merger of Air Atlas and Air Maroc) and 2017, is now carrying over 6.7 million passengers per annum (November 2015-October 2016), with this number increasing by 10% when compared to the same 12-month period in the year before (November 2014-October 2015). The airline during the November 2015-October 2016 period also recorded an average load factor of 65%.

Passenger traffic rises to over 6.7 million

According to the latest statistics made available by RAM, the airline carried 6.7 million passengers between November 2015 and October 2016, which represents a 10% increase in passengers when compared to the 12-month period from November 2014 to October 2015. However, while passenger traffic during that time may have seen double-digit growth, the result with regards to the airline’s load factor is not as promising. Between November 2015 and October 2016, when referring to OAG schedules, RAM flew 10.26 million seats, meaning for that period the carrier averaged a theoretical load factor of just over 65%. In the 12 months before, the carrier offered 9.48 million seats resulting in an average load factor of just 64%. So while passenger traffic increased 10%, the carrier’s load factor grew by just 1.2% due to the 8.2% surge in capacity during the 12-month time frame analysed. 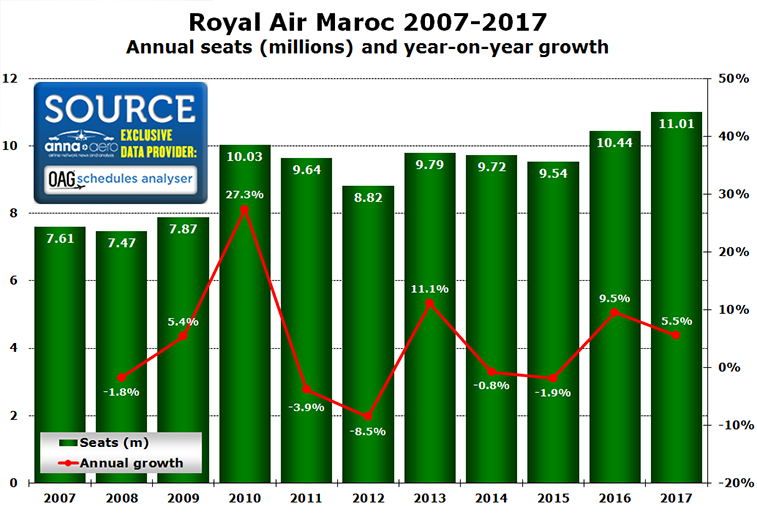 The growth in RAM’s seat capacity has been inconsistent in recent years, fluctuating from a growth rate of 27% in 2010 to a 8.5% reduction in 2012. Despite the irrational pattern, for the past 10 years the airline has recorded an average annual rise in seat capacity of 4.2%. It should be noted that 2017 is the first year in recent history that will the airline pass 11 million annual seats.

In 2016 RAM was one of Morocco’s leading carriers when it came to increasing seat capacity, with it growing its annual seats that year by 9.5%, while the remaining airlines serving the African nation averaged a 2.9% decline in annual seats when referring to OAG schedules. However it appears that the roles have reversed in 2017, with RAM’s 5.5% growth this year being dwarfed by the 15% rise in seats being seen from the nation’s other serving airlines. 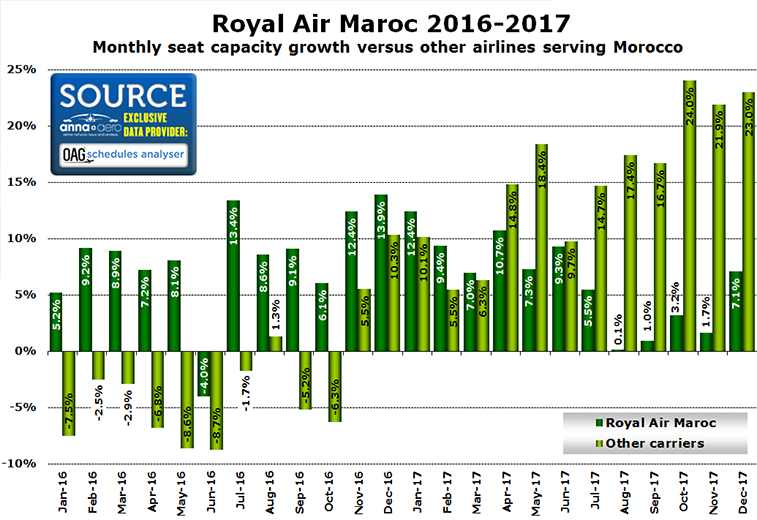 At the start of 2016, while RAM shone, other carriers in Morocco were not so successful, with all months except August, November and December seeing seat cuts. The airline’s largest airport operation is Casablanca, with Morocco’s largest city occupying 40% of RAM’s departing seat capacity in 2016. The airport itself saw passenger traffic climb 5.3% last year to 8.18 million passengers. Looking at Marrakech and Agadir, Morocco’s second and third largest airports, both saw drops in traffic during 2016 when compared to 2015, with Marrakech down 2.1% and Agadir falling by 5.3%. When delving further into the two airports’ statistics for 2016, it shows that passenger trends for both airports match the cuts being seen in capacity throughout the year by other airlines as suggested by OAG data. With Marrakech and Agadir’s traffic making up for 30% of all passengers from Morocco, and Casablanca, which is dominated by RAM (69% of all seat capacity from Casablanca in 2016), handling 48% of Moroccan passengers, this explains the declining capacity for other carriers from the nation last year when compared against the national carrier.

When it comes to RAM’s top 12 airports, the leading one for growth in 2017 is Tangier, with the northern Moroccan airport seeing a 39% increase in seats from the carrier this year when compared to 2016. The reason that Tangier is delivering this result is due to the airline increasing seat capacity on its routes to Casablanca (8.9% increase in seat capacity in 2017), Brussels (+55%) and Madinah (+17%), with the latter being a scheduled charter service to the holy city, with 14 rotations having took place between January and June, with May being the busiest month (five departures). The increase is also due to the airline’s route to Nador (launched 15 December last year) which will complete its first full-year of operation in 2017. 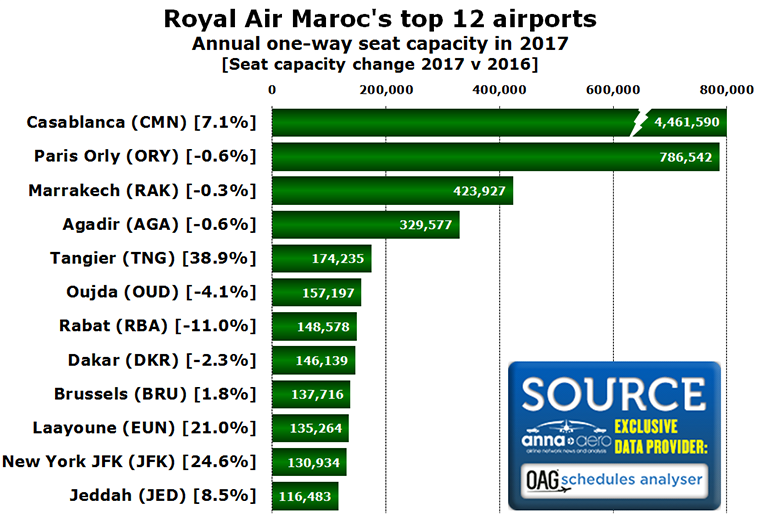 Of RAM’s top 12 airports, six have seen seat capacity cuts in 2017, with Rabat, which has encountered an 11% drop, seeing the most significant reduction. Outside of the top 12, airports which are reporting increases in seat availability in 2017 include Amsterdam (+7.5%), Paris CDG (+3.5%), Madrid (+8.0%), Algiers (+12%), Barcelona (+8.8%), Lyon (+3.9%) and Milan Malpensa (+6.2%). Three new airports have been introduced to the airline’s network during the past year, namely Manchester, Porto and Naples, with all three being served from the carrier’s Casablanca base. Currently the carrier has not announced any new routes for 2018. 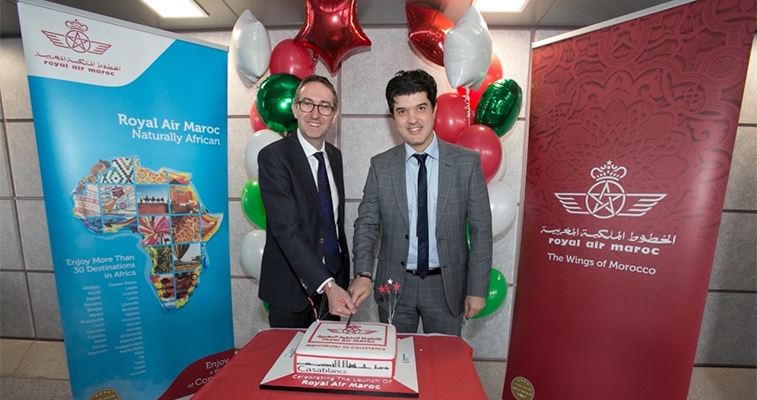 On 28 March Royal Air Maroc inaugurated flights between Casablanca and Manchester, with the UK airport celebrating the arrival of its newest carrier at the time with a route launch cake. Seen cutting the cake are Julian Carr, Aviation Director at Manchester Airport, and Achraf El Hassani, GM UK & Ireland, Royal Air Maroc. Manchester was one of three airports to join the African airline’s network in 2017, with the other two being Naples and Porto, with the latter two also connecting to Casablanca.