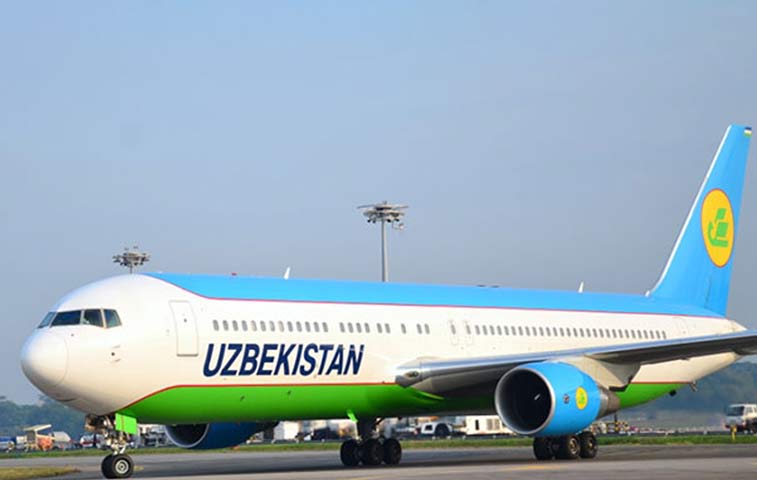 Uzbekistan Airways provides all of the published domestic capacity in Uzbekistan in 2017. It also accounts for nearly two-thirds of all international traffic to and from its home market. The central European nation’s flag carrier has only increased its total capacity by 2% since 2008.

With the exception of Russia and Ukraine, commercial air service markets remain relatively small in the former Soviet states that make up the CIS. There is more seat capacity on domestic and international flights serving Russia, than on those operating from the rest of the CIS countries combined.

In 2017 up to 4.73 million seats will be flown on services to, from and within Uzbekistan. This places it sixth out of 11 the CIS member states in terms of available two-way capacity. It also ranks sixth for domestic and international capacity. More than 800,000 seats are available on domestic services in Uzbekistan in 2017, with a further 3.91 million on sale to and from international destinations. 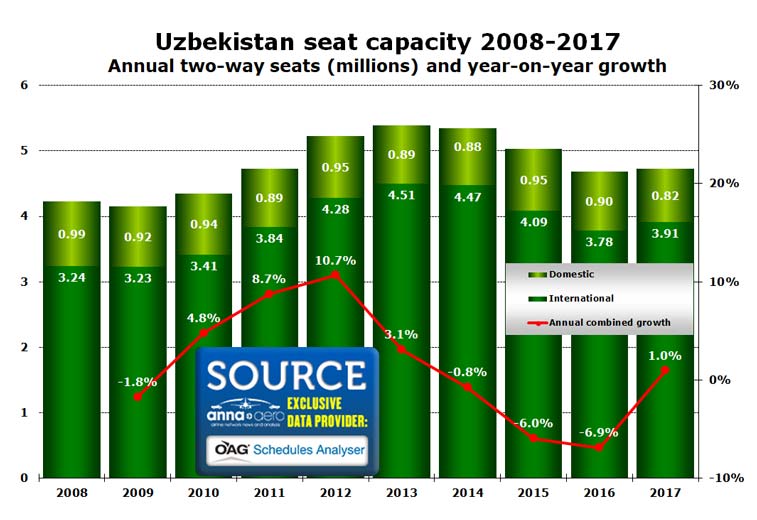 The number of seats available on all services to, from and within Uzbekistan increased by 30% to more than 5.39 million, from 2009 to 2013. There then followed a period of contraction, with capacity falling by 13% from 2013 to 2016 before the market stabilised during 2017.

International seats account for 83% of the two-way capacity serving Uzbekistan in 2017, up from 77% in 2008. The number of seats available in the domestic market has fluctuated, but overall this segment has seen a 17% reduction in capacity since 2008. Between 2016 and 2017 seats to and from international destinations have increased by 4%, while the domestic market contracted by 4% to its lowest level over the past 10 years. 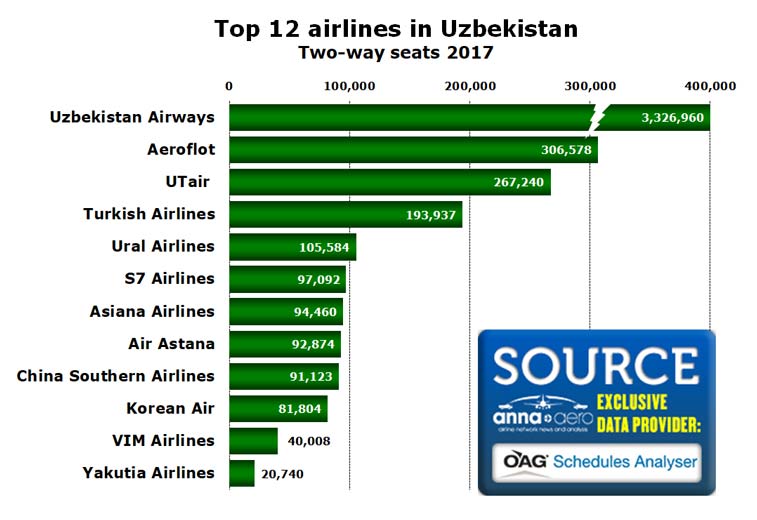 Uzbekistan Airways accounts for 70% of all seats on offer to, from and within Uzbekistan in 2017. It provides 64% of the total international capacity and is the only carrier with published domestic services. Since 2008 the national carrier has reduced its domestic capacity by 17%, but increased international seats by 5%. Its overall capacity has only increased by 2% over this period. The flag carrier’s largest international airport pair, based on 2017 published data is Tashkent to Moscow Domodedovo, while its largest domestic sector is the link from the capital city to Urgench.

Turkish Airlines and UTair have seen the strongest capacity growth on services to Uzbekistan during the past 12 months, with their available seats increasing by 26% and 10% respectively. Air Kyrgyzstan made the largest cuts, reducing frequencies on its service between Tashkent and Bishkek. VIM airlines, which had served multiple Uzbek airports from Domodedovo, ceased scheduled operations on 15 October, according to CH Aviation. The airline had been suffering from financial difficulties. 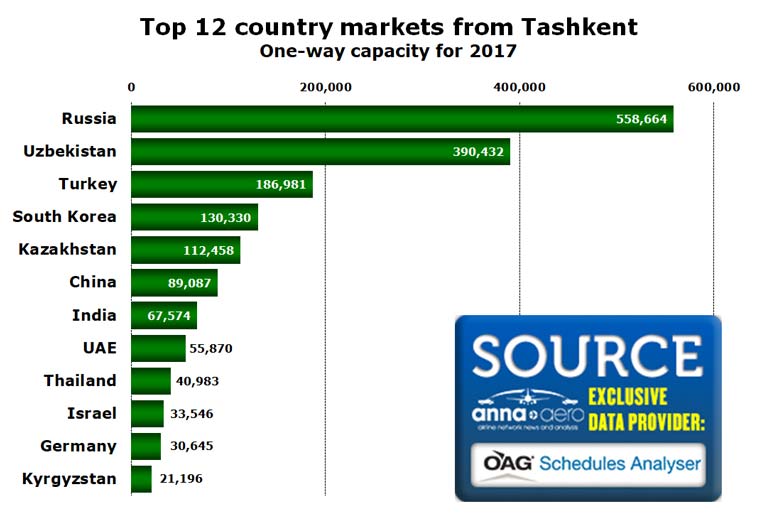 Tashkent is the main hub for Uzbekistan Airways and is by far the largest airport in the country by capacity. In 2017 more than two-thirds of all seats available from Uzbekistan will originate from its capital city airport, including 77% of departing international capacity and 48% of departing domestic seats. The next largest airports are Urgench, Samarkand and Bukhara. No other Uzbek airports are expected to exceed 100,000 departing passengers in 2017. Overall departing capacity increased by 3% from Tashkent between 2016 and 2017, with international seats growing by 3%, but domestic services falling by 8%.

Four of the top 12 country markets served from Tashkent are to other CIS members. The country market that has seen the strongest growth over the last 12 months is Turkey, with a 14% increase in departing seats. Services to Kyrgyzstan saw a 26% reduction in capacity due to the cut in flights by Air Kyrgyzstan. 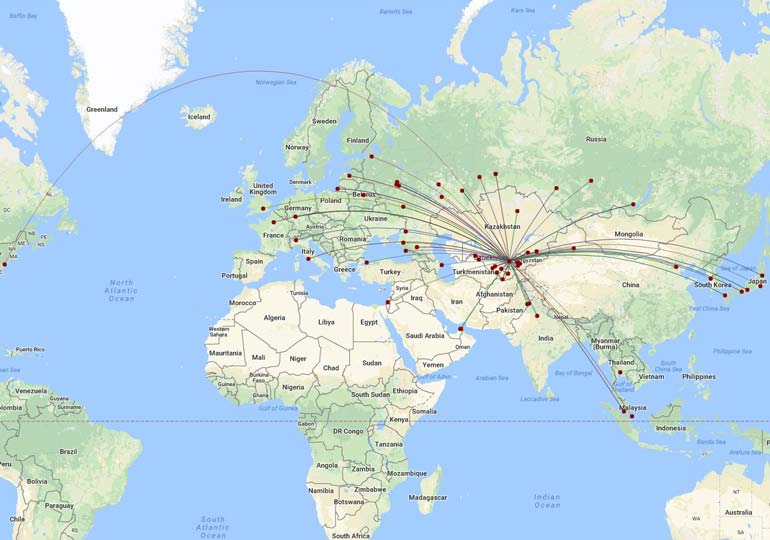 The route map showing the destinations available from Tashkent. Turkey was the fastest growing top 12 country market from 2016 to 2017. National carrier Uzbekistan Airways’ route network stretches from domestic and intra-regional services to those further afield, including a link to New York JFK.