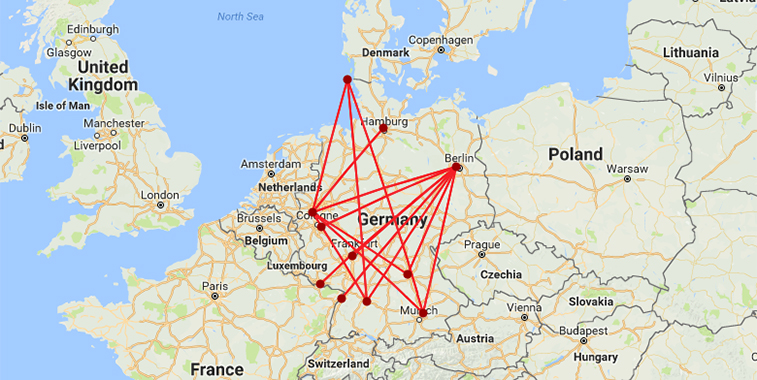 This map highlights airberlin’s German domestic network during the last week of this year’s summer season, with this route map becoming non-existent from 28 October as the carrier ends operations. The airports which will face the biggest impact are Berlin Tegel and Munich, with the loss of the carrier resulting in the market seeing a 24% cut in capacity.

Last year, the German domestic market grew by 2.9% to 47.3 million passengers, however, despite growth the market size is still below the 48.4 million achieved in 2011 according to figures by ADV. The market was starting to stabilise after a few years of fluctuating figures, with the past two yeas reporting slight increases in passengers of 2.9% (2016) and 1.7% (2015) respectively, but it would appear that this progress will now be undermined by the demise of airberlin.  This summer airberlin had a 24% market share of seats in the German domestic market. While Lufthansa has agreed to take on 81 airberlin aircraft, which it is speculated the company will use to enhance the operations of in-house LCC Eurowings, it has not yet been confirmed which markets these new assets will be deployed in. Currently Eurowings is indicating a 13% increase in German domestic seats for S18 when compared to this summer, however that growth will only account for 10% of all seats operated by airberlin in S17. This figure, however, is very likely to change. Other parts of the airberlin business are apparently being considered by easyJet, which if true could see the LCC commence operations from Berlin Tegel, however as yet no word has been given about a potential deal. Currently easyJet does not operate in the German domestic market and it only serves Berlin Schönefeld, Hamburg, Munich, Stuttgart, Dortmund, Dresden and Friedrichshafen from international destinations.

Cologne Bonn, which is Germany’s sixth largest airport with regards to domestic passengers, reported the best growth among leading airports for German-bound traffic in 2016, with it seeing passenger numbers in the sector climb by just under 14% when analysed against 2015 figures. That represents a net increase of over 416,000 passengers on domestic services last year. 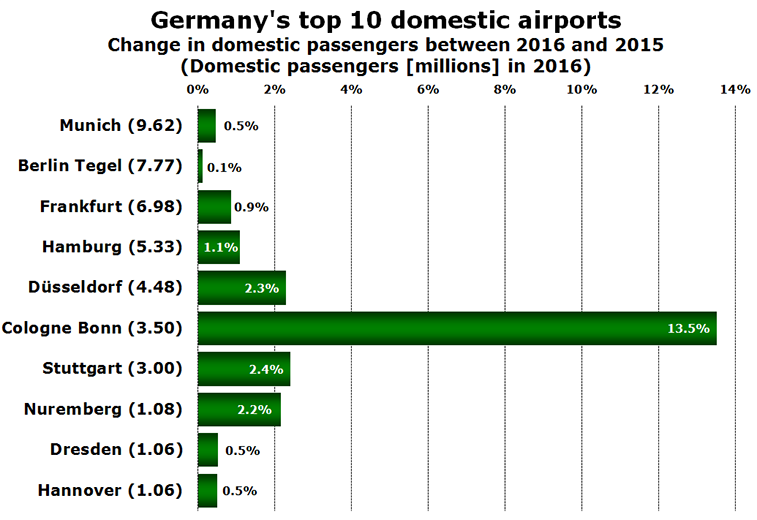 airberlin leaving the market at most stable time

airberlin will fly its final services on 27 October, with it ceasing to exist after this date as a brand. The carrier’s bleak end comes at a time where the German market has performed better than it has in recent years, with domestic traffic up 4.7% for the first eighth months of 2017 when compared to the same period for 2016. Two months have seen drop offs in traffic so far this year, with April down 3.1% and June 3.6% when referring to statistics from ADV. 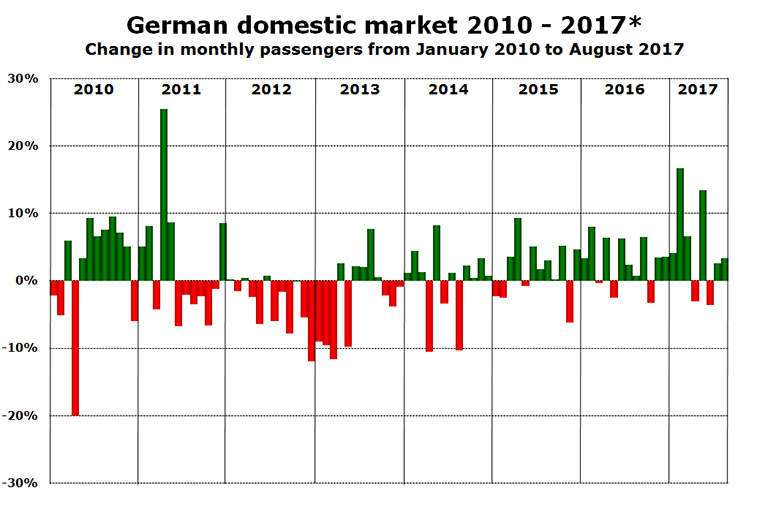 airberlin leaving a dent of over five million seats

airberlin offers just over five million seats in the German domestic market this summer season, with the sector making up just under 40% of the carrier’s total capacity in S17. With the carrier’s demise comes the opening of capacity at many of its leading airports, with the most severely impacted with regards to the domestic market being Berlin Tegel, Munich and Düsseldorf. 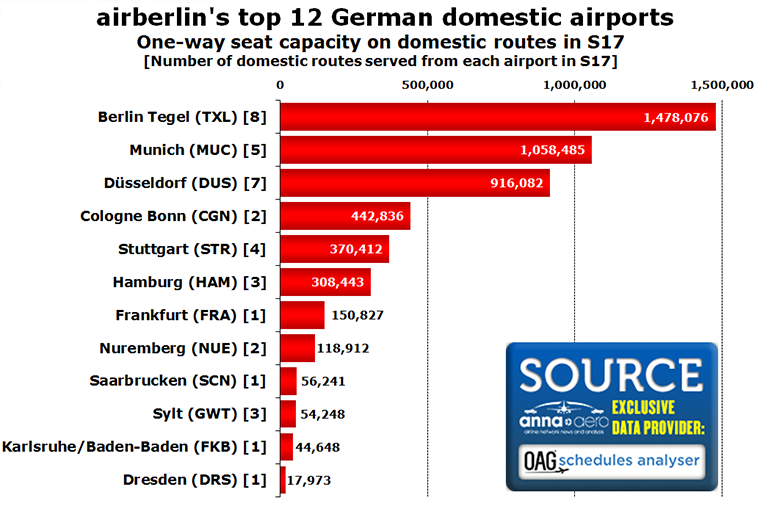 While Dresden appears in the top airports, it should be noted that airberlin’s link from Düsseldorf to the former city ended on 11 June. Saarbrucken will become the only airport on the airberlin network which will loose a capital connection, with Karlsruhe/Baden-baden gaining a Eurowings connection to Tegel from January, while other German airports that airberlin linked to the capital already have existing services by other carriers.

airberlin is one of three carriers leaving market

While there has been much publicity surrounding airberlin’s demise, when it comes to the German domestic market it is not the only carrier to be departing in 2017. Along with airberlin, Transavia and People’s Viennaline (all highlighted in red) are also bowing out of the market this year. The three combined this year made up 25% of all seats in the domestic market. Currently Transavia operates seven weekly flights between Munich and Berlin Schönefeld, but the route will cease at the end of October due to the carrier’s decision to close its Munich base. People’s Viennaline operated flights between Friedrichshafen and Cologne Bonn, a route that launched on 2 November last year on a twice-daily weekday basis, however OAG schedules indicate that the route ended on 14 April. One interesting airline operating in the German domestic market is Luxair which offers a twice-daily weekday and a singular Sunday rotation between Saarbrucken and Hamburg. It is interesting to note is that Ryanair, the fourth largest airline in the German domestic market, only operates one summer seasonal route between Cologne Bonn and Berlin Schönefeld at present. 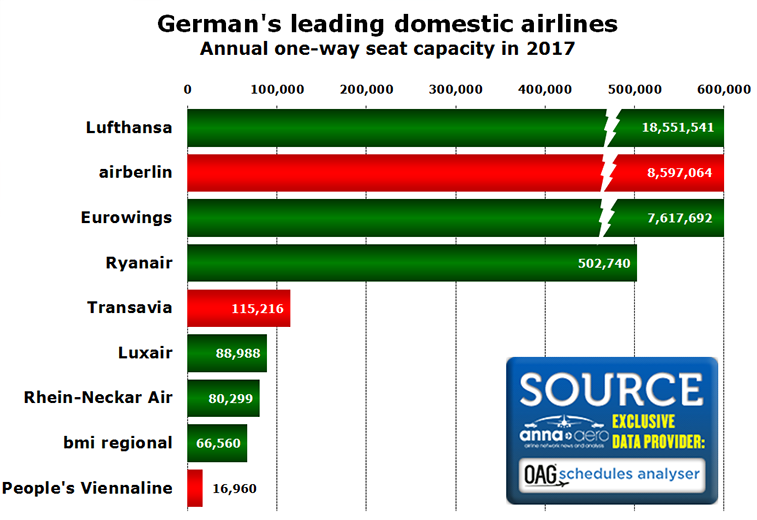 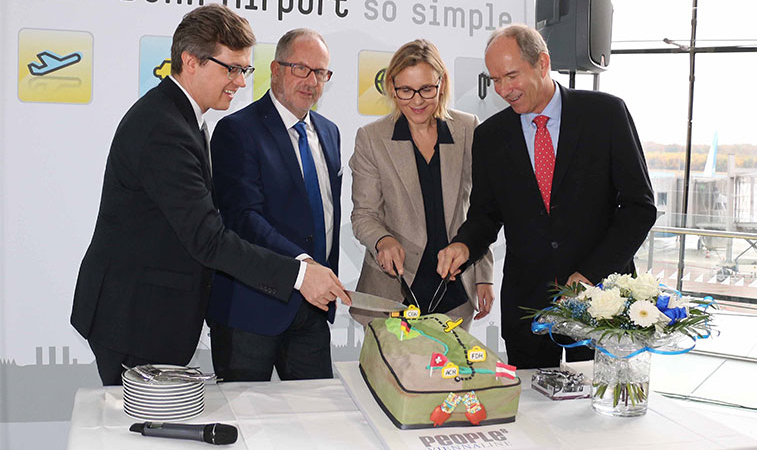 While much focus lately has been put on the demise of airberlin, when it comes to the German domestic market it is one of three airlines to be departing the sector in 2017, with People’s Viennaline having ceased its link between Friedrichshafen and Cologne Bonn in April, while from the end of October Transavia will close its Munich to Berlin Schönefeld link as the airline closes its only German base at the former airport for the start of the winter season.