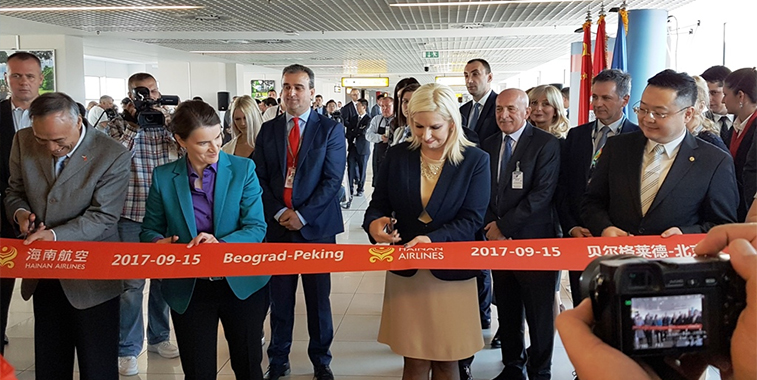 Hainan Airlines continues to open new routes and expand its domestic and international capacity, including with this link to Belgrade which launched on 15 September. Domestic seats account for the majority of the airline’s network, with more than 90% of capacity operating within China in 2017. International links are growing in importance, however, the proportion of capacity flown on international routes has increased since 2008.

China has seen strong capacity growth on domestic and international air services over the past 10 years. OAG schedules data show that the number of two-way seats available increased by 151% from 2007 to 2017. This included a 160% increase in domestic seats and a 122% rise in international capacity. In 2017, domestic seats account for 78% of all capacity in the Chinese market, up from 76% in 2008. 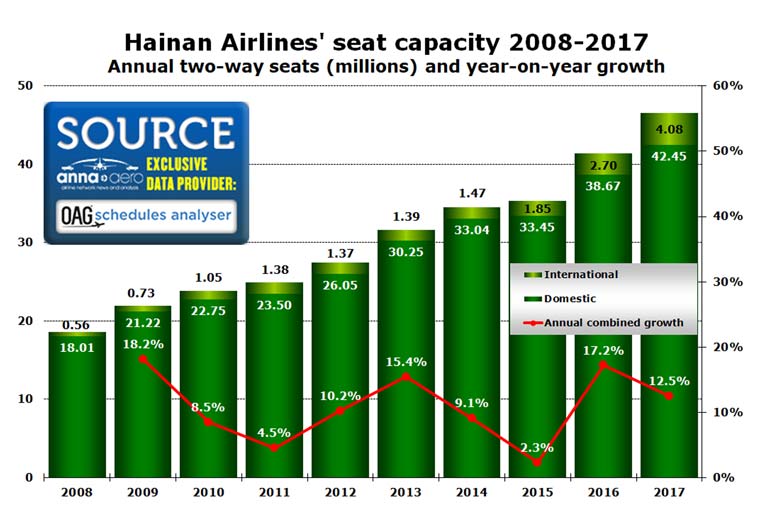 The total number of seats flown by Hainan Airlines increased by 151% from 2008 to 2017, matching the overall growth rate for the Chinese market. In 2017 the airline is providing around 46.5 million seats across its domestic and international network. The capacity increase over the past two years alone has been significant. From 2015 to 2017 Hainan Airlines has increased total capacity by just under one-third.

Domestic capacity dominates the Hainan Airlines network. In 2017 about 42.5 million seats are available on domestic sectors, accounting for 91% of the carrier’s total capacity. International flying is, however, on the increase. The proportion of total capacity operating on international routes has increased from 3.0% to 8.8% from 2008 to 2017. Domestic capacity increased by 136% during this period, while the number of seats available on international routes grew from around 0.6 to 4.1 million. This represents a growth rate of 629%. 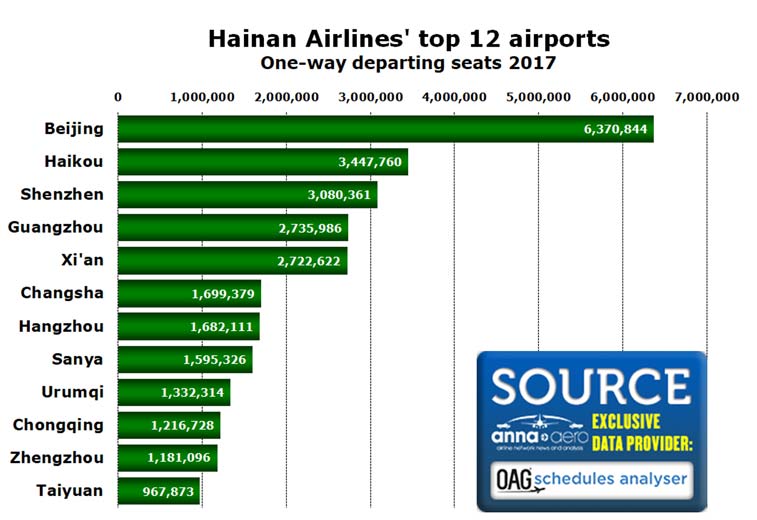 Nanjing drops from the top 12

Zhengzhou, Haikou and Taiyuan were the three leading airports among the carrier’s top 12 when it came to seat capacity growth between 2016 and 2017, with respective capacity increases of 24%, 21% and 20%. Haikou overtook Shenzhen to become the carrier’s second largest origin airport during this period, as Hainan Airlines increased its domestic capacity by 20% and its international seats by 60% from the Hainan Island facility. Taiyuan Airport replaced Nanjing in the top 12 origin airports from 2016 to 2017. 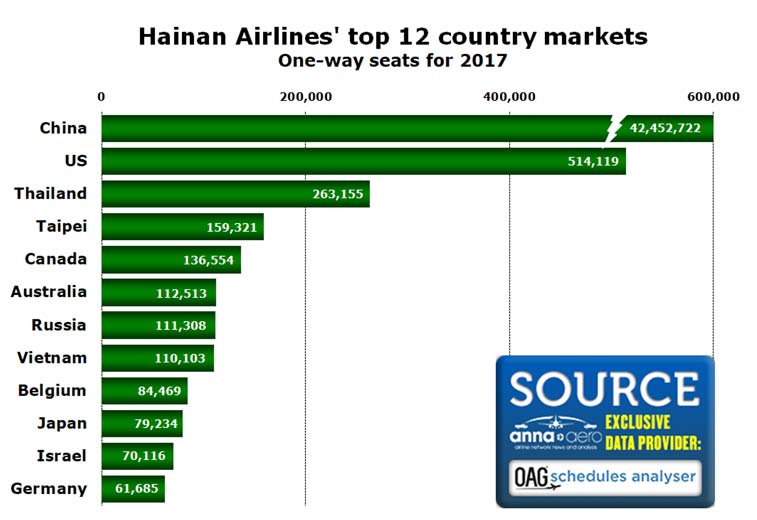 Excluding the dominant domestic segment, a further four of Hainan Airlines’ top 12 country markets are in the Asia Pacific region. Further afield, North America features as a prominent destination region. Australia, Vietnam and Israel experienced the strongest growth from 2016 to 2017, entering the top 12 country markets at the expense of Italy, France and the Czech Republic. Italy was the only one of these markets to experience a cut in capacity, and this was minimal at just 1.3%.

Hainan Airlines’ largest airport pair, based on 2017 capacity, is the domestic link between Beijing and Shenzhen, while its largest international sectors are those from Beijing to Toronto Pearson and Boston. The Chinese carrier has added several new international routes in 2017, including links to Europe and the Middle East, plus additional capacity to Australia. It will also launch services from Shanghai Pudong to Brussels and from Chengdu to New York JFK at the end of October, while the carrier has recently commenced operations between Chongqing and JFK. 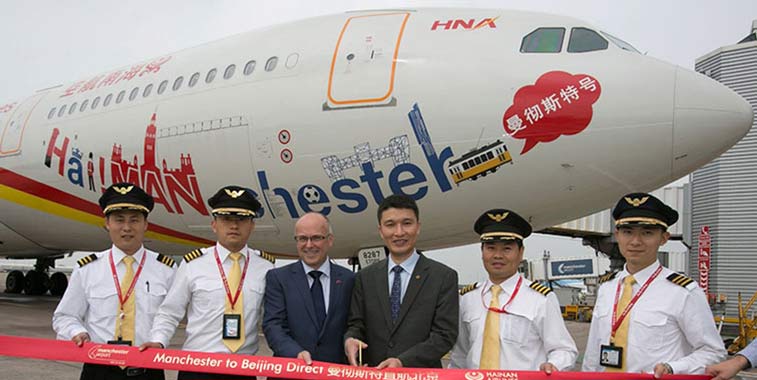 Hainan Airlines has opened a number of new international routes over the past few years including this link between Beijing and Manchester, which launched in the summer of 2016. The carrier will establish several more international connections before the end of 2017, including new services from China to Brussels and New York JFK.