easyJet announces new Bordeaux base with three stationed A320s; double-digit growth at airport every year since introduced to network 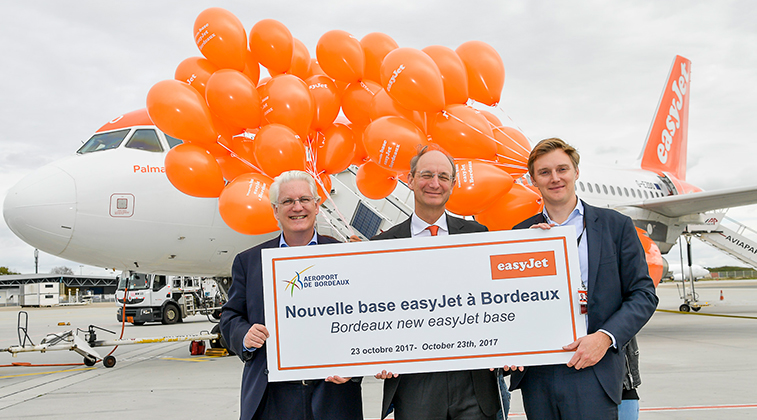 On 23 October, easyJet announced that it would open its next base at Bordeaux Airport. Seen announcing the news are: François Bacchetta, easyJet Country Manager for France; Pascal Personne, CEO Bordeaux Airport; and Reginald Otten, CCO easyJet France. The airline will station three A320s at the airport from the start of next summer.

easyJet, which opened its last base in March 2017, a seasonal three-aircraft operation in Palma de Mallorca, has now confirmed that it will open its newest base at Bordeaux from the start of next year’s summer season. Like Palma de Mallorca, Bordeaux will also have three stationed aircraft, all of them A320s, with the increased capacity expected to help the airline pass two million annual passengers from the French airport in 2018. Pascal Personne, CEO Bordeaux Airport, commented: “easyJet has been our partner for 11 years now and this base launch is a real asset for the economic development of Bordeaux and the region. Our clients will benefit from new routes, an improved schedule with more day trip options, and additional first waves. We are really happy with this announcement and look forward to receiving positive feedback in both the short- and long-term.” Bordeaux will become the carrier’s sixth base in France after Paris’ Orly and CDG airports, Lyon, Toulouse and Nice.

Has been flying ever since 2006 inauguration

easyJet first started serving Bordeaux in 2006 with flights from London Luton, followed the next year with a link from Bristol. Since then, the LCC has developed a strong relationship with the airport, evident by the fact that since its first year of operation the carrier has reported double-digit growth in annual seat capacity from the facility, with 2017 being the first year to see easyJet pass two million annual seats. Currently, Bordeaux is easyJet’s 26th largest airport operation in relation to seats this year, with it just sitting behind Palma de Mallorca in 25th, but ahead of Rome Fiumicino in 27th. 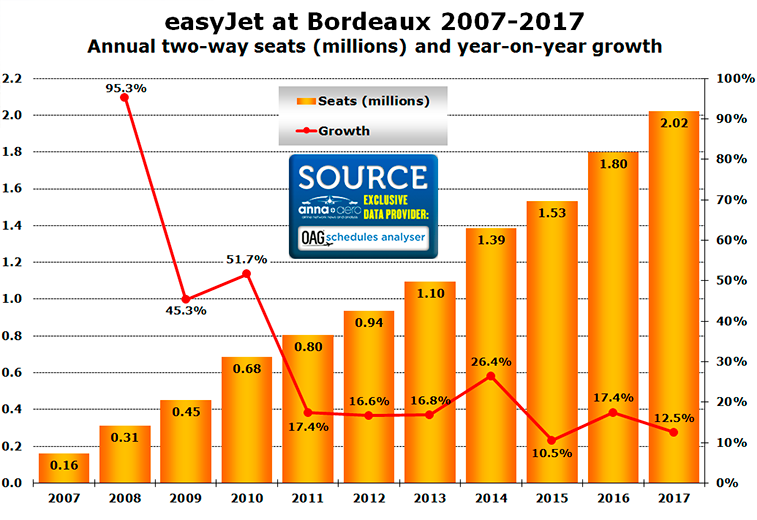 The stationing of three A320s at the airport is expected to generate five new routes. “Next spring the new routes, a mixture of business and leisure, will be launched from the new base and these will directly benefit the local tourism economy, as well as accelerating Bordeaux’s connectivity within France and with the rest of Europe,” commented easyJet CEO Carolyn McCall about the routes that will be announced. With this, it means that the new services could include domestic operations. Currently, the airline serves four French airport pairs from Bordeaux, namely Lyon, Nice, Marseille and Lille.

Presently, the airline serves 22 destinations on either a seasonal (five routes) or year-round (17) basis from Bordeaux. At the moment the five summer seasonal routes that easyJet operates from Bordeaux are: Belfast; Glasgow; Hamburg; Liverpool and Palma de Mallorca. 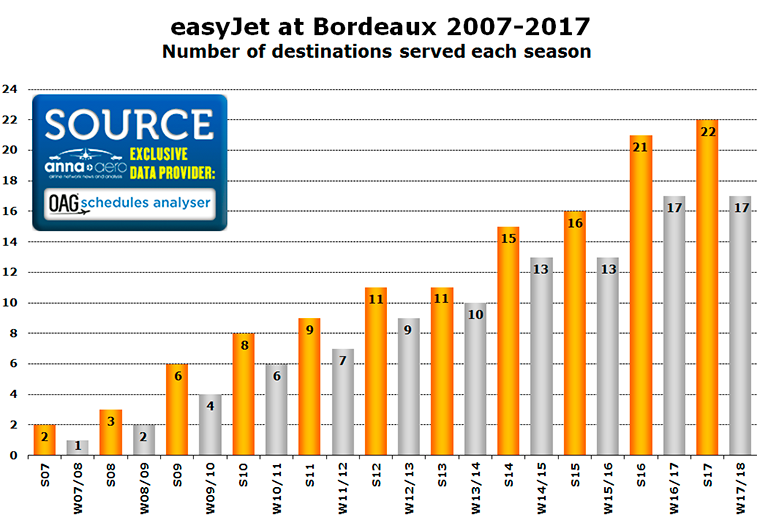 easyJet is not the first airline to station aircraft in Bordeaux. When referring to OAG schedules, Volotea has between two-to-three stationed A319s at the airport throughout the week, withAir France, KLM, HOP! and easyJet itself also having night-stopping aircraft. When analysing OAG schedules for 27 October, easyJet’s first arrival into Bordeaux is 07:30 from Basel, however the airline has a departure at 07:05 to Lyon, while the second departure of the day is the 07:55 back to Basel. The aircraft that operates the morning service to Lyon arrives from Marseille the previous evening at 22:05. 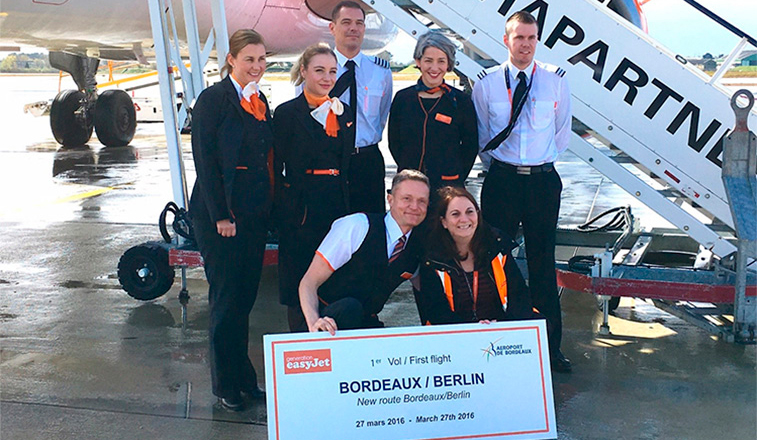 One of easyJet’s most recent launches from Bordeaux was at the start of the S16 season, a connection to Berlin Schönefeld. With the news of the airline stationing three A320s at the airport from the start of S18, it has confirmed that it will open more than five new routes, with easyJet CEO Carolyn McCall saying that the new connections will serve a mixture of business and leisure markets. The airline hopes to carry two million passengers from Bordeaux in 2018.