Madrid-Singapore is “Skyscanner Unserved Route of the Week” with over 400,000 searches; Iberia to introduce its third Asian destination?? 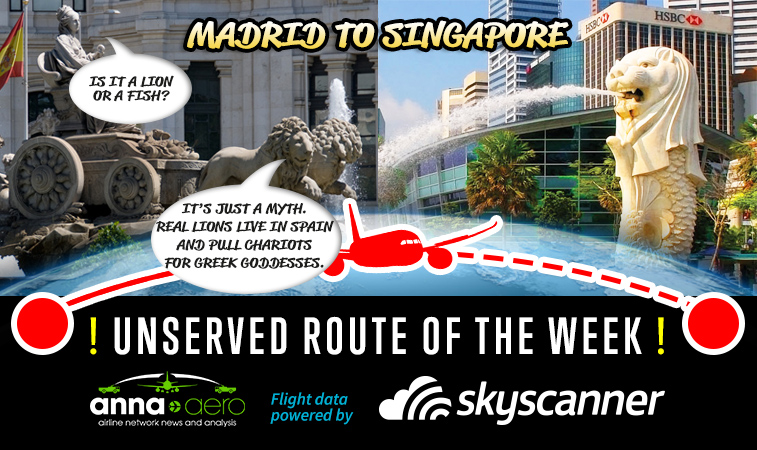 Come on Iberia/IAG!!!!! There are over 1,000 searches a day on Skyscanner for Madrid-Singapore services; add that to those searching directly with the airlines and competitive sites and you are likely to get a verrrrrry big number indeed. (Before anyone writes in, yes we know: apparently there were lions in Spain once upon a time, but we’re pretty sure nobody ever harnessed them to vehicles.)

With over 400,000 searches in the last year, a potential city pair from Madrid to Singapore has been identified as this week’s “Skyscanner-anna.aero Unserved Route of Week” – a powerful analysis based on aspirational data captured from the Skyscanner.net flight comparison site used by +60 million unique visitors per month. The Spanish capital city will be the host of the 141st IATA Slot Conference next month when no doubt the airport’s operator Aena will be looking to make further Asian additions to its network. 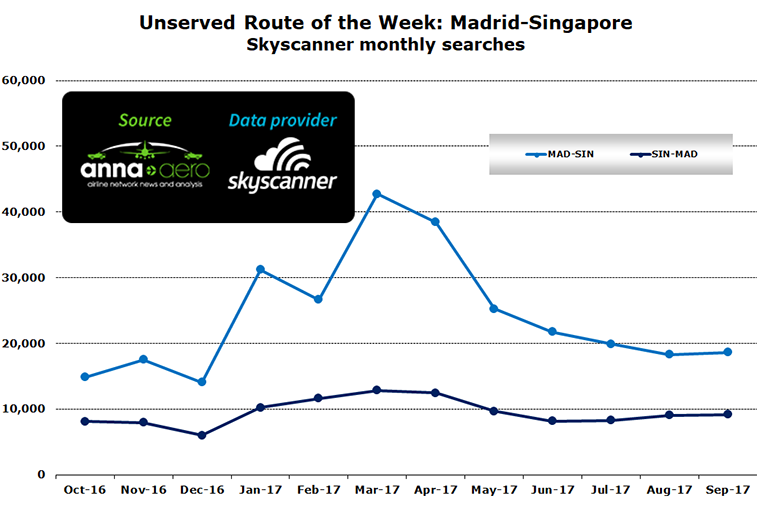 anna.aero suggests Iberia or Singapore Airlines (or even Scoot) to start this service

Skyscanner demand on this week’s unserved route shows a preference towards the Madrid end of the city pair, with a 72/28 split, so on this basis we looked at potential carriers at the Spanish origin first. According to OAG schedules for the week commencing 20 October, the largest carrier at Madrid is unsurprisingly Iberia (42% share of weekly seats). The airline’s 109-destination non-stop route network from the Spanish capital presently consists of just two Asian destinations – both three times weekly services – namely to Shanghai Pudong and Tokyo Narita. The oneworld carrier clearly has intercontinental expansion on its radar having just this week announced its intentions to add a three times weekly seasonal service to San Francisco in S18, and it will also start three times weekly flights to Managua in October next year. In addition, Iberia intends to expand its Narita service up to five times weekly next October too, a route launched only a year ago. So perhaps with this seemingly buoyant long-haul market from Madrid at the moment, this Skyscanner data will be the last piece of information needed to convince the IAG-owned carrier that Singapore represents the best opportunity in continuing this network strategy.

Madrid’s second biggest carrier is Air Europa (15% share of weekly capacity), offering nearly 93,000 one-way weekly seats across a 43-destination non-stop network. However, unlike Iberia, it currently has no long-haul services going east. With the exception Tel Aviv, its 18 destinations outside of Europe and Africa are either in the Caribbean, North or South America. On this basis the SkyTeam carrier is unlikely to begin a Singapore service, unless there is a significant change in its route development planning.

Contemplating the Singapore end of the route, the airport’s #1 capacity provider of its 71 serving airlines is  the flag carrier Singapore Airlines, controlling 30% of weekly seats. The Star Alliance carrier already offers 14 European non-stop destinations on its network, including four times daily operations to London Heathrow and double-daily to Frankfurt, and indeed a twice-weekly service to Barcelona. Additionally, Singapore Airlines’ in-house LCLH carrier Scoot, which is the second largest airline at the airport (12% of weekly seats), also flies to Athens on a twice-weekly basis. With a mixture of products (low-cost or legacy) available to be deployed on this sector to Madrid, a service originating at the Asian end of the potential route has a good chance of being established in the near future. 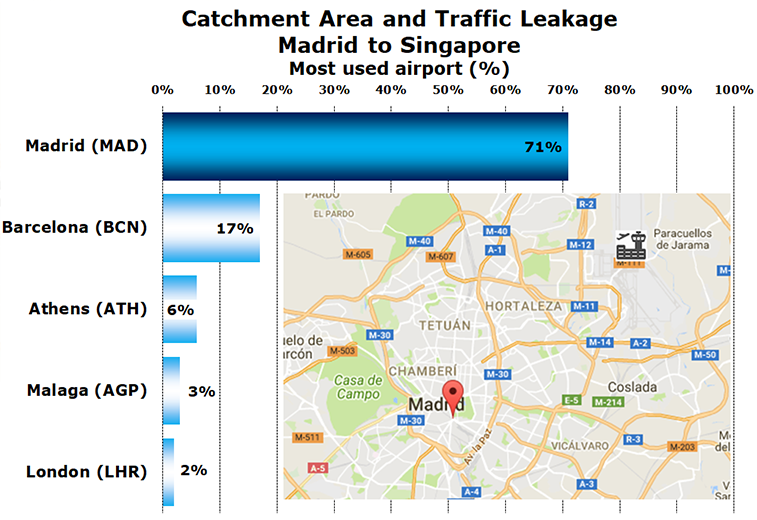 Matt Williamson Skyscanner’s Commercial Executive says: “Madrid serves 71% of the catchment (50 km around the airport) going to Singapore. With better service, such as a non-stop operation, the traffic could grow by 41%.”

When looking at the previous year of search data, the busiest month for potential traffic flows (for both directions on the route combined) is March 2017, with nearly 56,000 searches, over 35,000 higher than the lowest monthly figure, which was recorded in December 2016 (20,000 searches). The seasonality profile of this search data is slightly more extreme than the last Unserved Route of the Week (Tampere to Malaga), with the low-month traffic representing 36% of the highest month. According to OAG Traffic Analyser, because there is no direct service, the top three connecting options chosen by those passengers who did book travel between Madrid and Singapore in the last 12 months (year ending August 2017) indicates that the majority of connecting travellers used Doha (29%), Dubai (28%) and London Heathrow (12%). A total of 31 different transfer hubs were used by passengers looking to fly between the two airports over the past year.

Indeed, an O&D that is not served by a non-stop flight will typically display a low purchase rate and low traffic. In this instance Skyscanner’s Travel Insight indicates a monthly average of 5.6% for the Madrid to Singapore route (see graph below). Therefore, if there was a Madrid to Singapore route, and if bookings performed in line with the “Skyscanner market average” for direct services at both airports (7.8%), the airline operating this route could immediately expect an improved purchase rate of 39%, without any increased marketing spend. However, with over 400,000 annual searches in the last 12 months, a daily service should be immediately viable for the airline choosing to start this potential city pair. 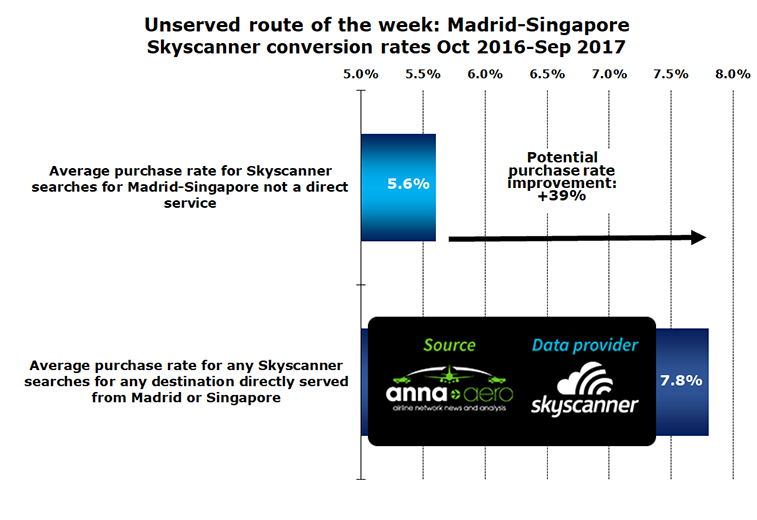