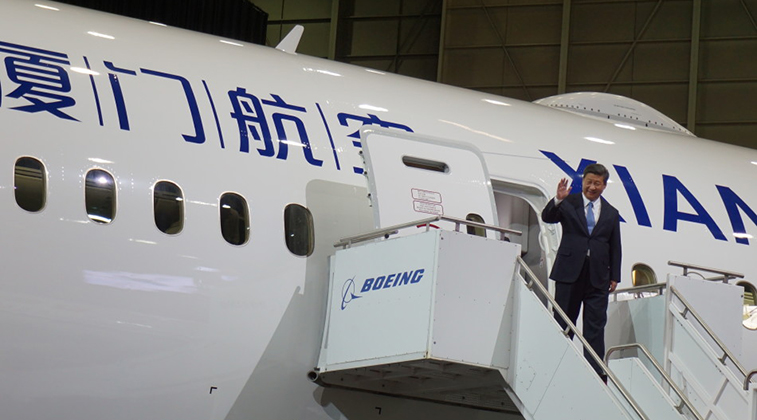 “Awesome China” is the slogan of the moment in the world’s second largest economy, set to overtake the US within a decade (although some methodologies dispute that). As Xi Jinping cemented his power this week (adding the equally catchy “Xi Jinping Thought on Socialism with Chinese Characteristics For a New Era” to the constitution) China begins W17/18 season with an additional 2.1 million departing seats – the equivalent of adding Ryanair to the market. Xiamen Airlines – from Mr Xi’s home province – leads the world in new capacity, adding over a quarter of a million seats per week this winter.

This week, anna.aero has analysed the data of 229 countries to establish the leading countries, airports and airlines heading into W17/18. Once again, we have decided to analyse OAG Schedule Analyser data to determine which airlines, airports and countries have seen the biggest growth in net seats for the second week in November compared with the same period in 2016. However, these results should be treated with care as they are only a snapshot, comparing across individual weeks. A similar analysis say for the second week of December would produce different figures, but overall the rankings would likely be pretty similar.

China, US, Indonesia and India are leading country markets

China, like it was at the start of W16/17, is once again the leading country market when it comes to weekly departing seat capacity increases this winter, with it forecasting a net rise in weekly departing seat capacity of 2.08 million for W17/18 when compared to the start of the previous winter season. Behind China is the US, followed by Indonesia and India. The leading region is Asia, with 13 of the top 40 nations being in this region: 12 in Europe, six in South America, four in the Middle East, three in North America and two in Africa. 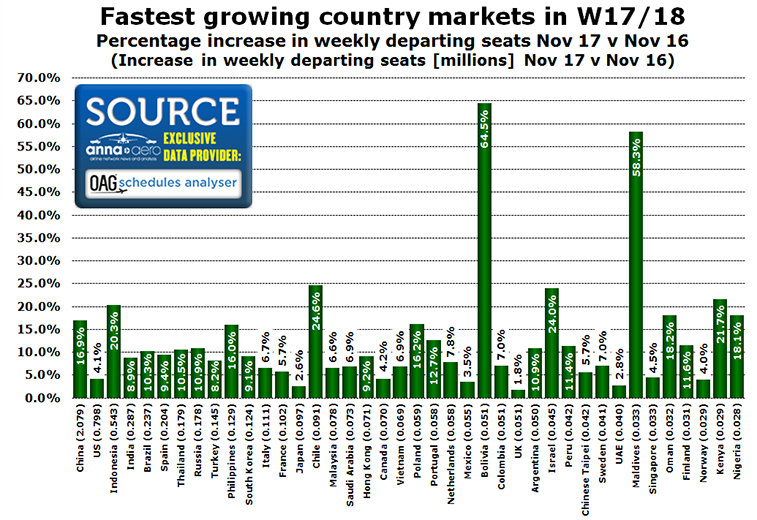 When looking at results from when anna.aero did this analysis this year, one nation which has dropped from 11th to out of the top 40 is Germany, with the market indicating a 3.0% drop in seat capacity, with the demise of airberlin no doubt being a strong factor which has resulted in this decline. Another European nation which has also slipped down the rankings is the UK, with it going from being the eighth biggest growing market at the start of W16/17 to 27th at the beginning of W17/18. While the UK has seen the loss of Monarch Airlines, like Germany has lost airberlin, another factor that is hurting the industry is Brexit, with the weakening pound impacting the nation’s performance when compared to other leading European markets including Spain (sixth largest growing market at the start of W17/18), Russia (eighth), Turkey (ninth), Italy (12th) and France (13th).

Jet2.com, which is reporting a 77% increase in weekly departing seats heading into the start of W17/18, is the leading carrier in terms of percentage increase in seats among the top 40 airlines. Among the highlights of the airline’s winter programme include its first non-summer operations from its new bases at Birmingham and London Stansted, with the carrier confirming extra aircraft at these airports for winter due to strong demand from passengers. With regards to net increase in seats, the number one airline is Xiamen Airlines, with it operating over 237,000 more seats per week at the start of W17/18 when compared to the start of last winter. Along with Xiamen Airlines, a further 11 Chinese airlines, with China Southern Airlines being second, appear in the top 40, including Beijing Capital Airlines which this winter will introduce flights to London Heathrow from Qingdao starting 17 November. 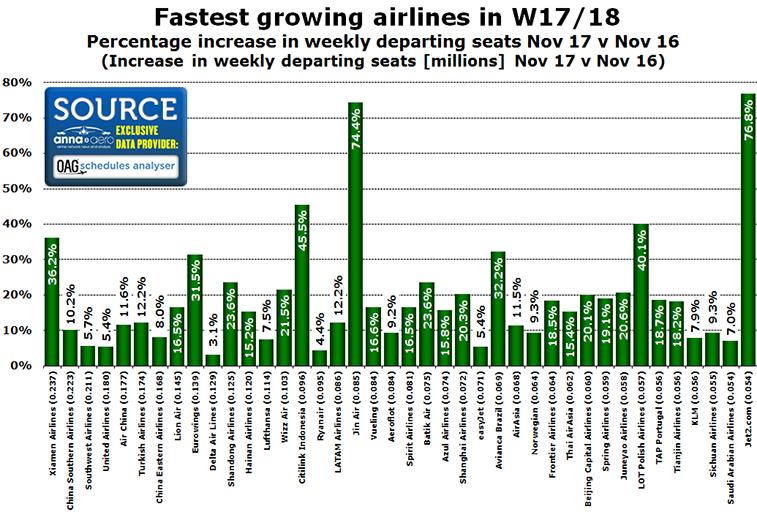 With regards to the European market, it appears that it is Eurowings which is the region’s leading carrier for growth heading into winter, with this also taking into account operations flown by germanwings. What is also interesting to note is that Wizz Air (the 14th biggest airline for seat capacity growth) is adding 7,500 more weekly departing seats this winter than Ryanair (16th). Along with these European LCCs, Norwegian and easyJet, along with Jet2.com, make it into the top 40.

Jakarta is leading airport for growth

Looking at the start of winter, it is Jakarta which has took the title of being the leading airport in the world for increased weekly seat capacity, with the Indonesian airport seeing over 129,000 additional weekly departing seats this winter. 21 of the top 40 airports for growth at the start of W17/18 are in China, which is no surprise given that the nation has an extra two million weekly seats on offer when compared to the start of W16/17. Among Chinese airports, three which are reporting considerable growth are Nanchang, Zhuhai and Quanzhou, with all three indicating seat capacity growth above 60%. While Jakarta is number one, a further two airports in Indonesia (Denpasar and Juanda) also appear in the top 40. 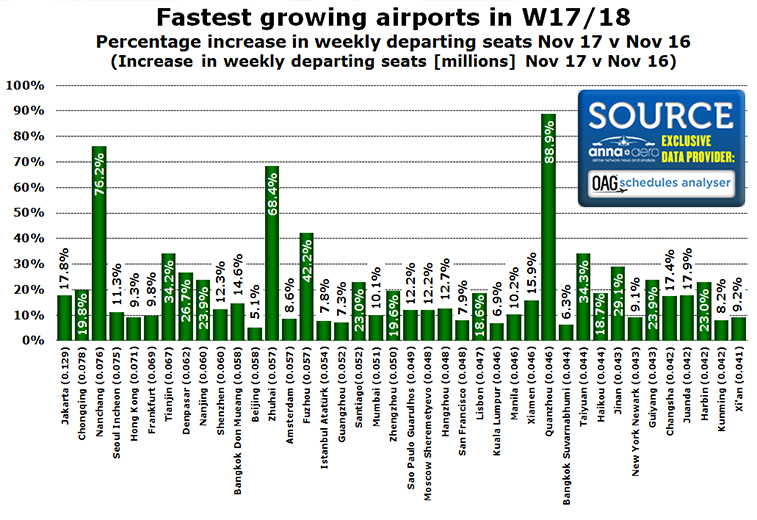 Along with Chinese and Indonesian airports, a further seven airports in Asia appear in the top 40 rankings, while five airports in Europe (Frankfurt, Amsterdam, Istanbul Atatürk, Moscow Sheremetyevo and Lisbon), two in North America (San Francisco and New York Newark) and two in South America (Santiago and Sao Paulo Guarulhos) also make it into the top 40. 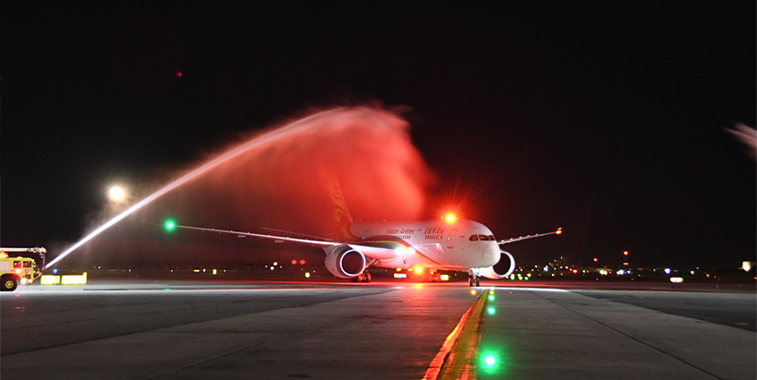 Last week Hainan Airlines commenced operations between Chongqing and New York JFK, with the US airport welcoming the arrival of its newest airline with a water arch salute. As it was last year, China is the leading country market for growth heading into the start of W17/18, with it showing to have just under 2.1 million more weekly departing seats this winter when compared to W16/17. Hainan Airlines is the the 12th fastest growing airline with regards to net increase in seats, with the Chinese airline operating around 120,000 more weekly seats this winter when compared to last winter.